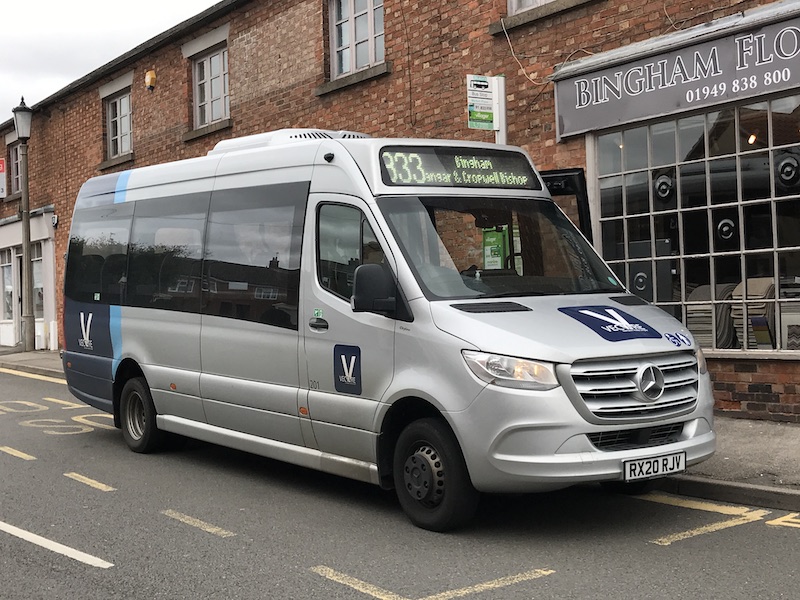 Following my Essex experience last week Vecatre boss Dominic Kalantary reassured me their fledgling Essex tendered operation on route 13 between Waltham Cross and Epping was “mobilised at incredibly short notice and watch this space for a touch more class and a significant improvement”, adding a photo teaser of a smart minibus in service on Vectare’s longer standing tendered operation in the East Midlands.

It’s always welcome to receive feeedback to my postings and intrigued by what was promised I popped up to Nottinghamshire yesterday to take a look at the two routes Vectare are operating in the rural area around Bingham and across to Grantham.

Route 833 was Vectare’s first foray into the tendered local bus market in May 2019. The opportunity came after Your Bus ceased operating in the East Midlands. The 833 is a circular route from Bingham (located 11 miles due east of Nottingham) serving a succession of small villages north and south of the A52 Nottingham-Bingham-Grantham road. It runs at a generous daytime hourly frequency in both directions

“Nottsbus Connect provides feeder routes from local villages on to the main transport network” and details of all the timetables for the network (including route 833) can easily be found on the Nottsbus Connect website.

After Your Bus left the scene CT4N (the operating arm of Nottingham Community Transport) took on the operation of route 33 which links two of the larger villages served by the 833 (Cropwell Bishop and Cropwell Butler – to the west of the map above) with Nottingham, while Vectare picked up the Nottinghamshire County Council tender for the circular 833. A trip from Bingham around the circuit takes a comfortable 51 minutes making for a handy commitment of two buses for the bi-directional hourly journeys. There’s no evening or Sunday service.

It’s reported route 833 takes as little as £6,000-£7,000 revenue per annum and like many services of this kind passengers with concessionary passes dominate. Vectare have a cost reimbursement contact arrangement to run the service.

For the relatively small size of the villages served and low passenger use of the service it’s a very impressive timetable and service frequency. And even better, as Dominic reported, Vectare have indeed introduced brand new Mercedes Sprinter minibuses complete with leather type seats and usb sockets. Surely there can’t be many isolated villages served by such a frequent bus route and modern, comfortable buses? It’s quite something to behold.

I took a ride around the clockwise circuit yesterday morning on the 12:07 from Bingham. We only carried one passenger for the 31 minute journey to the village of Langar and then picked two passengers up in Cropwell Bishop for the 14 minute ride on and back into Bingham. We passed the anti-clockwise bound bus in nearby Cropwell Butler. The buses are timed to leave Bingham approximately half an hour apart so residents in some of the villages have a choice of a longer or shorter journey or a longer wait.

It’s a lovely ride round and some of the villages are a delight to travel through with some very attactive properties. Bus information seemed to be very much in evidence at bus stops, including route numbers on the bus stop flags. It was impressive to see.

My driver was a friendly chap. He’d previously worked as a coach driver and joined Vectare just over a year ago. His ticket machine wasn’t working, so passes weren’t being recorded, but it didn’t seem to faze him.

He wasn’t so keen on the other route Vectare have recently started running – the 93 which links Bingham with Grantham. Vectare began this in June as lockdown was beginning to ease. The Monday to Saturday service provides eight journeys a day (seven on Saturdays) between Grantham and nearby Barrowby Gate with four of the journeys continuing on to Bingham. The timetable takes one bus with a handy 45 minute gap at morning and afternoon school times so I guess a school contract conveniently fills these.

I took a ride on the 11:15 from Grantham yesterday morning which is one that continues on a Saturday to Bingham (the others being 08:45, 15:15 and 17:15). It’s a fairly tight schedule with the bus arriving from its previous journey into Bingham at 11:14 – the route takes a circular loop around the town centre, strangely not calling into the bus station on the way.

I was a bit perturbed yesterday when 11:15 came and went with no bus appearing but reassured by Vectare’s own timetable posted in the timetable case confirming it was 11:15.

Knowing the young dynamic team running the company are into technology I took a look at the ‘Next Bus’ app on my smartphone but this was (incorrectly) showing the next journey as 12:34 …

… while Google maps said the same. Not quite so reassuring.

I stuck with it and within a couple of minutes a smart Mercedes minibus pulled up and dropped a passenger off, I boarded, and we set off.

And then I realised why the bus was running slightly behind schedule. Grantham’s town centre ring road is not the best place to be on a Saturday morning.

No end of traffic lights, an unhelpful one way system and long queues of motorists together with a diversion caused by Barrowby Road being closed for roadworks under the railway bridge meant it took us a frustrating 15 minutes just to leave the town centre.

However once we were clear of Grantham, my driver got his foot down along the A52 for the 15 mile uninterrupted journey to Bingham making almost all the delayed time up; helped by not having to stop due to no passengers being on the journey.

I was impressed to see a Nottsbus Connect timetable leaflet produced by the County Council available from a dispenser on both buses. This shows the timetable for the 833 as well as four other rural routes in the area. There wasn’t anything promoting the 93 but there was hand sanitiser available too.

As well as the rural Nottsbus Connect network and Nottingham Coaches’ two-day-a-week roure S2 ‘shoplink’ to Morrisons (well promoted on the bus stop outside the Co-op as seen above), there’s trentbarton’s 10 minute frequency ‘mainline’ branded route into Nottingham via Radcliffe and West Bridgford with smart colourful liveried buses …

Although I’m still not sure about their new livery and typeface.

All in all it was a very impressive ride round and well done to Vectare for raising the bar on rural route operation. If Dominic and Peter and their team can replicate this approach in Essex, residents of Waltham Cross, Waltham Abbey, Upshire and Epping (along with Brentwood, Pilgrims Hatch and Blackmore – where they also now run route 61) have got a pleasant surprise heading their way.

A big plaudit also to Nottinghamshire County Council. It’s so refreshing to see excellent publicity and information available out on the ground along with a decent website.

It was just a shame to see so few passengers.

5 thoughts on “Improvements at a rate of Notts”