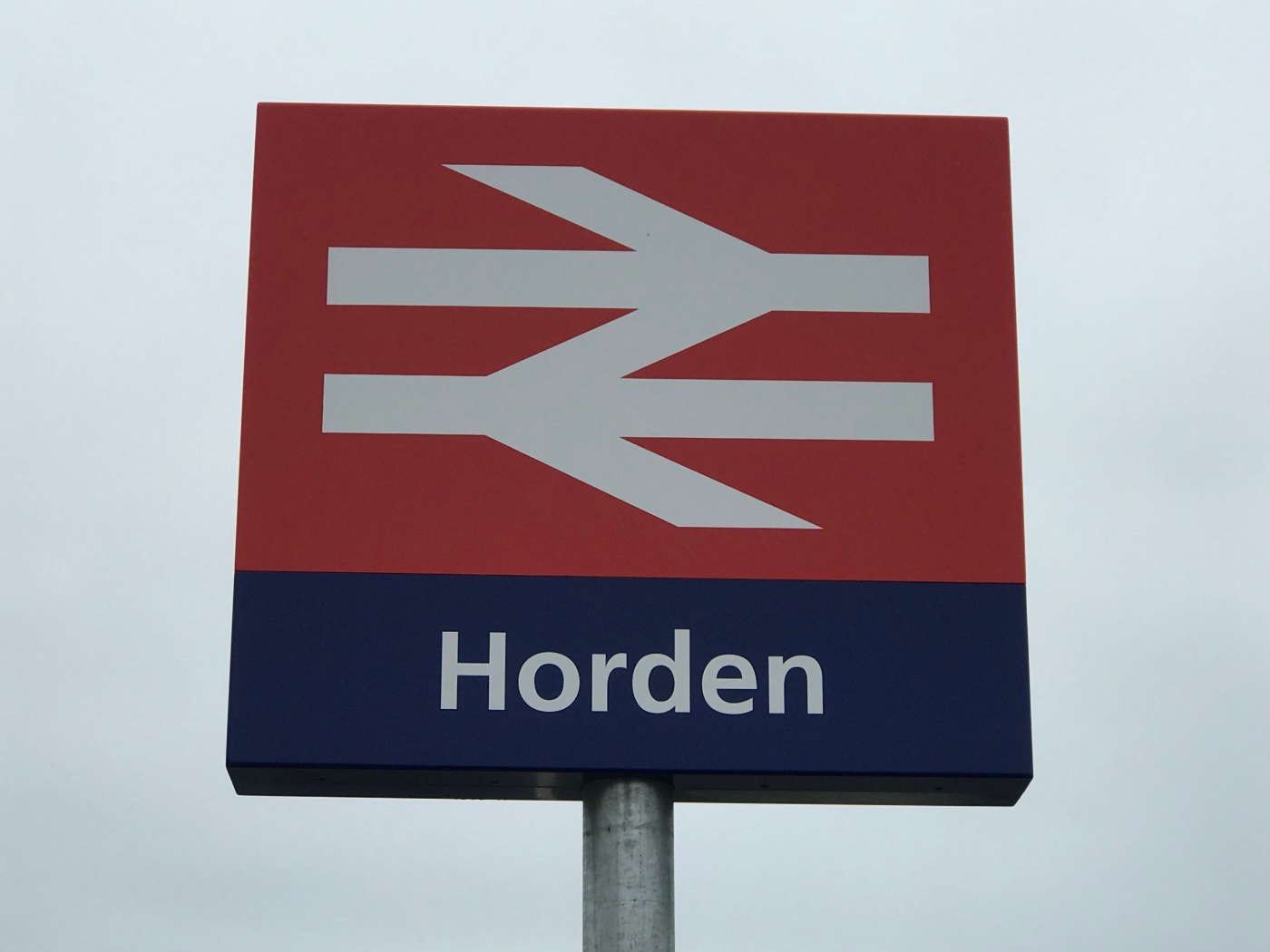 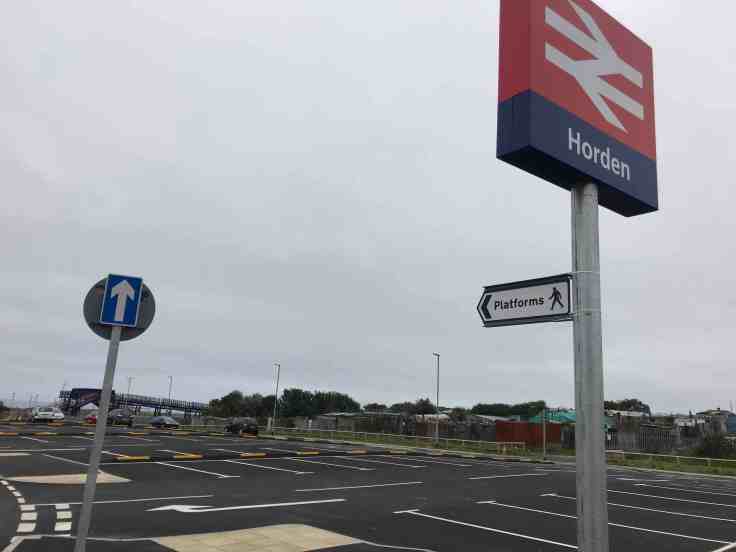 A brand new station at Horden opened quietly without any ceremonial ribbon cutting, balloons or cup cakes during the Covid-19 ‘essential travel only’ lockdown era on Monday 29th June. 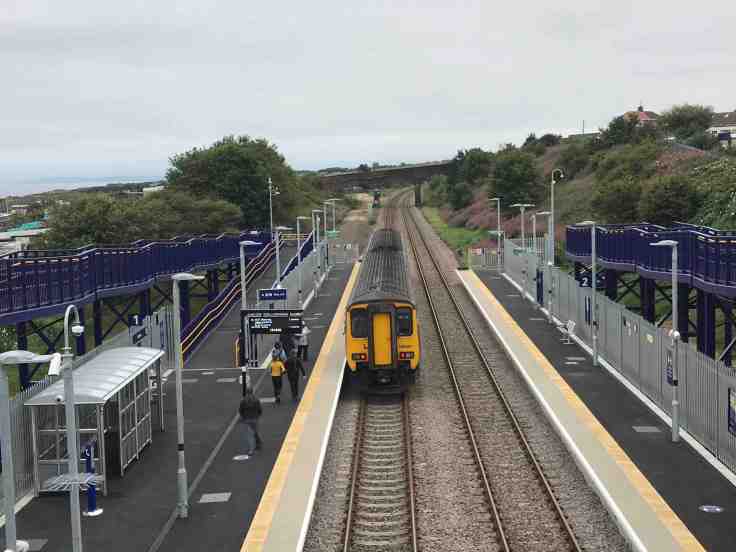 Now non-essential travel is allowed, I thought it was high time for a trip up north to take a look at what £10.5 million has bought in the way of station facilities.

Durham County Council had a long-held ambition to reopen the station at Horden and applied for funding from the DfT back in 2013. This was unsuccessful so plans were revised and a new preferred site identified (closer to the original station which was 200 yards further south from the new site – see photo below).

The revised plan was consulted on in 2016 and got a 98.6% thumbs-up approval rating from the 1,397 respondents. Another cosultation followed in 2018 with plans for the station gaining formal approval later that year. Its been a realtively quick process and build as these things go.

I was interested to see how the visualisations Network Rail promoted back in 2018 had turned out in practice.

I can’t do fancy drone shots to compare with the visual above but here are some photos of the footbridge and ramps as they’ve turned out and showing how they really are the dominant feature of the new station. 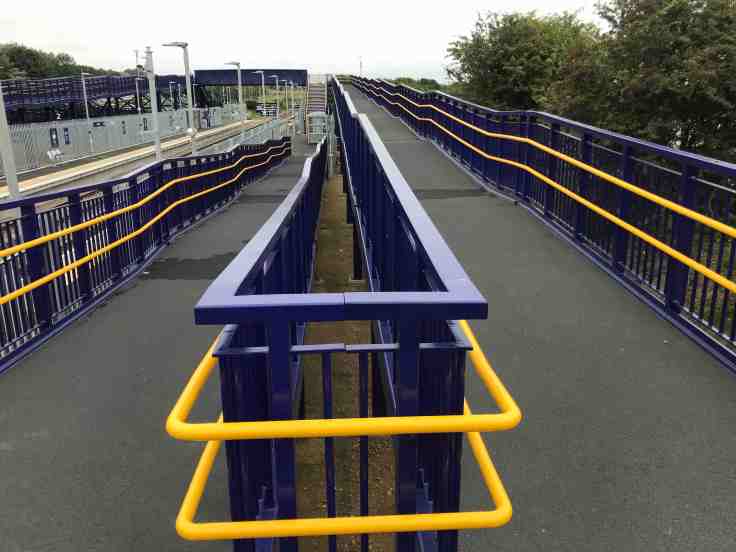 Which turned out to be correct and how nice to see a bus stop as close to the platforms as the nearest non-priority car parking space.

It’s the hourly Go North East operated ‘indigo’ branded local circular route 209/210 linking nearby Peterlee with Horden and now diverted to serve the station via the new access road. If you don’t mind which way round the circle you travel a bus arrives on a 209 about ten minutes before trains depart (to both Newcastle and Middlesbrough) and on a 210 about ten minutes after. So that’s handy.

howing train departures by the platform entrance/exit and ticket machine. Perhaps that would have burst the £10.5 million budget though. 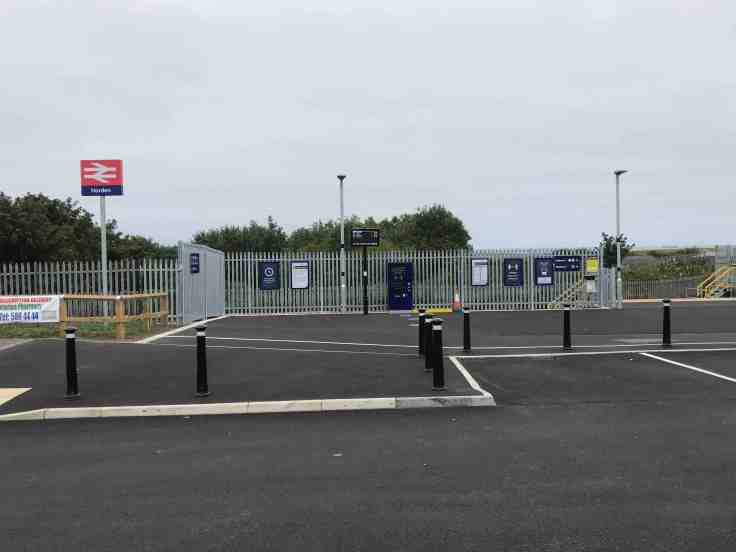 Especially as it’s one of those new fangled Northern TVMs where you have to specify the journey you’re making before being able to buy a ticket meaning it seems to take forever rather than something simple like just buying an off-peak return.

As you can see from the departure screen display above, Horden is served by the hourly Northern service between Newcastle, Sunderland and Middlesbrough with journeys continuing on to Nunthorpe east of Middlesbrough and even some journeys all the way to Whitby.

This compares favourably with bus routes serving Horden with journey times of 39 minutes to Sunderland; around an hour to Newcastle (with a change in Peterlee) and about the same to Middlesbrough.

With these journey times and good value prices it was’t surprising, and indeed was very encouraging, to see large numbers of passengers heading into Newcastle at lunch time today. 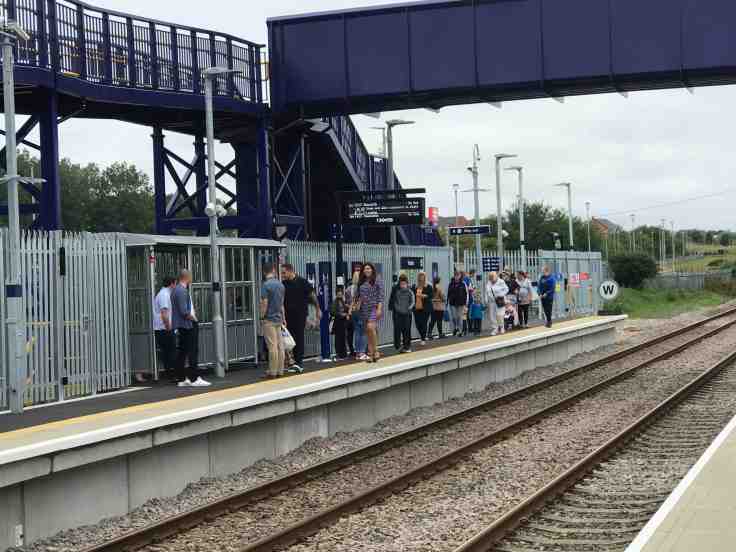 Sadly it was noticeable none of these passengers were putting on their face coverings as the train approached…. 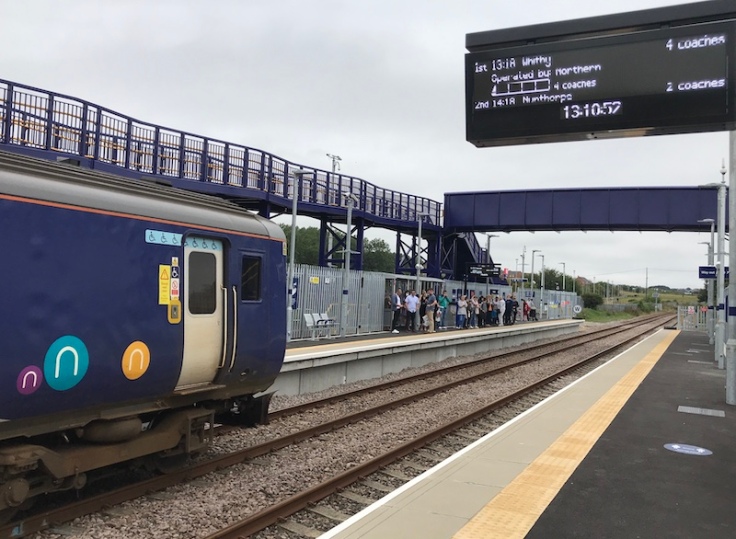 …. even though they were under the watchful eye of Northern’s Travel Safe Officers.

The officers told me they’d catch them on their return journey this evening. I hope so, as my journey to Horden had been on a busy Northern train with a groups of men and women in their twenties paying no heed to social distancing and shouting and laughing loudly. It wouldn’t surprise me to hear of a Covid spike on Teeside and Tyneside in the next week or so. I kept my distance and hand sanitised.

Back to Horden station. As well as two massive access ramps, stairs and footbridge, two platforms, a fancy ticket machine, electronic departure screen, bus stop lay-by alongside a car park for about 130 cars (with no electric recharge points but disabled and parent/baby priority spaces near the platforms) …. what else does £10.5 million buy you? 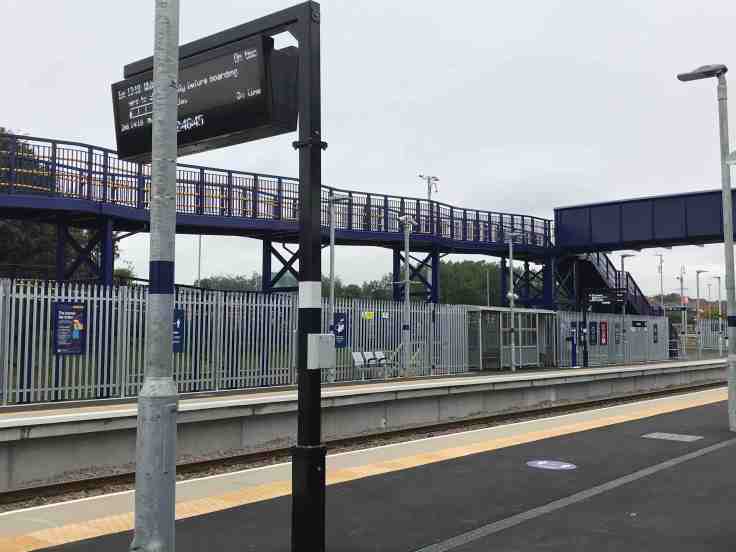 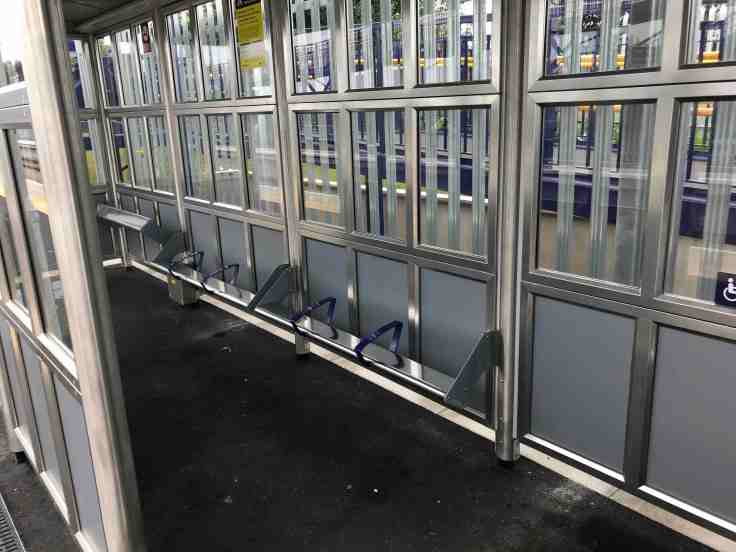 …. but also a traditional image of a clock incorporated into some kind of electronic display that I thought might be inter-active, but wasn’t. 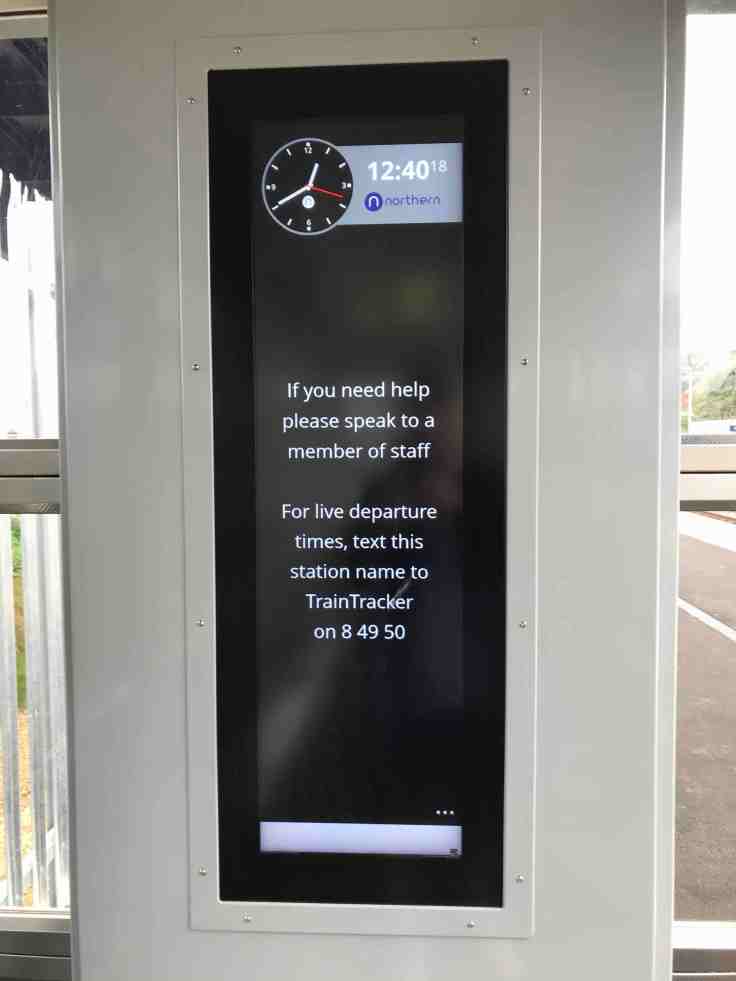 There are also two lots of three seats on each platform ….

…. and the usual electronic displays showing the next departures both visually and audibly.

The car park is free to users between 8am and 6pm as well as between 6pm and 8am. Make of that what you will. 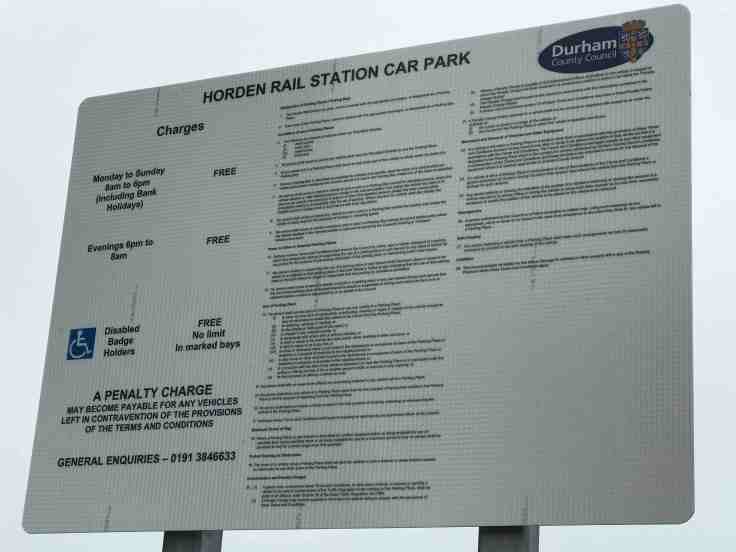 And there are a few bike stands but it’s a shame the budget didn’t stretch to a covered area to protect the cycles proving the person who specified them is not a cyclist.

There’s no doubt Horden station is serving a good catchment area and on today’s showing is already proving popular.

Durham County Council projected 71,000 passengers would use the station by 2024 – that’s around 200 a day, and I reckon that’ll be easily achieved which just goes to show station reopenings are a good thing if in the right location with a good catchment area, which Peterlee and Horden certainly are.

I noticed on board the trains the station is announced as ‘Horden Peterlee’ (rather than just Horden) which also appears on the visual displays, although there’s no mention of nearby Peterlee at the station itself.

The station facilities are rather basic and Horden won’t be winning any design awards for elegance or architectural merit, but it’ll definitely be a strong contender for winning the Longest Access Ramp At A New Station of the Year Award.

I assume they’re cheaper to instal and with minimal operating costs compared to lifts, which seem to be the norm at new stations elsewhere.

It turns out £10.5 million doesn’t buy much these days. But then this is the railway industry.

19 thoughts on “Horden back on track after 56 years”