I found yesterday afternoon’s tweet from Southern Vectis so positive and inviting it encouraged me to pop over today and have a mini wander around the Isle of Wight.

The Government’s Test & Trace app trial may have been a flop but it’s always a pleasure to visit the Island to ride the Island Line and the Southern Vectis bus network. The route pattern and timetables are so easy to follow with very good frequencies considering the rural nature of much of the area served and low density urban areas – even Newport only musters just over 25,000 population. 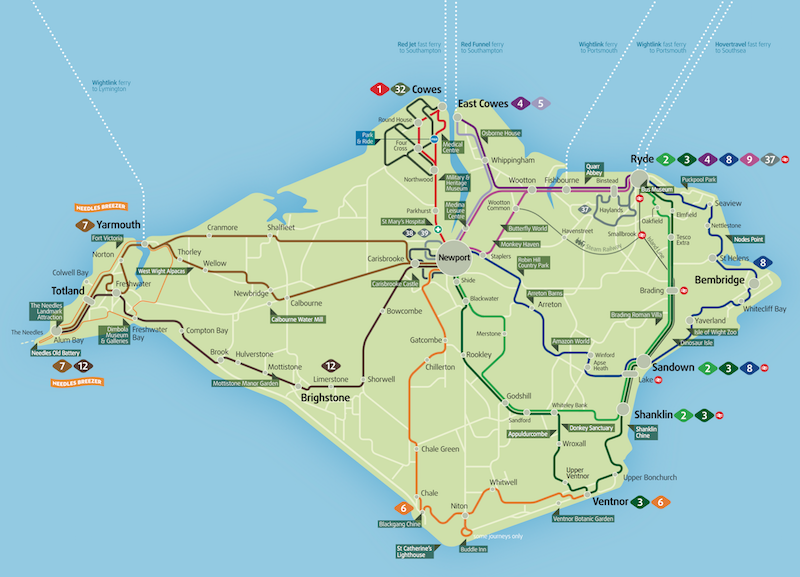 Normally gorgeous weather on a Saturday in July would see a deluge of day trippers and holiday makers heading over from the mainland. Today was a different story. 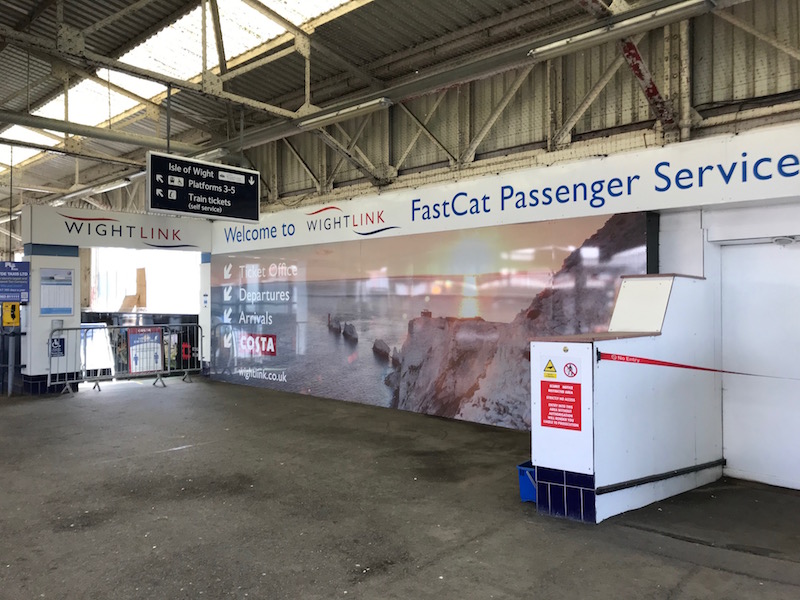 The relaxation of competition laws still applies to cross Solent ferry companies with reduced services operating by both Red Funnel and Wightlink. The latter’s ‘Fast Cat’ catamaran service from Portsmouth to Ryde Pier Head is still suspended which meant the Hovertravel service from Southsea to Ryde was the obvious choice for me to take.

The best value ticket from my home station at Hassocks is an ‘integrated’ train and hovercraft option but you have to know to enter ‘Ryde Hoverport’ as your destination station if using a ticket vending machine rather than ‘Ryde Esplanade’ or ‘Ryde Pier Head’ – the latter is for the Wightlink service. It’s a shame you can’t buy a through ticket to Shanklin and include the Island Line.

With a Senior Railcard, Hassocks to Ryde Hoverport costs £22.50 for an off peak day return which isn’t bad considering the return train fare to Portsmouth along the West Coastway line is £11.30 and the Hovercraft is £17.50 if bought separately. And the through ticket includes the Hoverbus circular route linking Portsmouth & Southsea station with Hovertravel’s departure point near Clarence Pier by Southsea Common. It returns via Portsmouth Hard Interchange too. 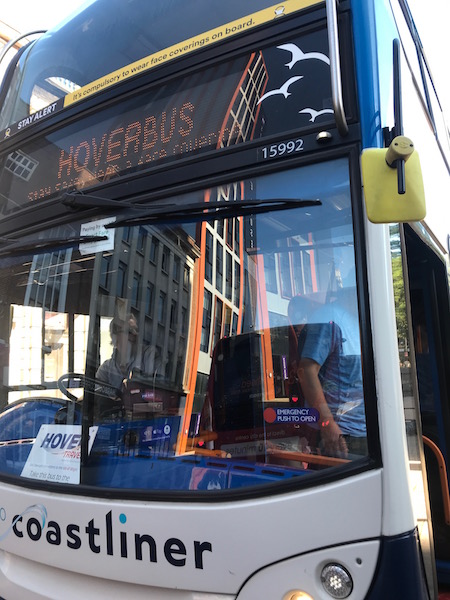 To increase capacity in these socially distanced times, Stagecoach have upgraded the Hoverbus to double deck using a Coastliner branded bus rather than the usual Hoverbus branded single decker. However the Hoverbus destination display and a notice in the windscreen together with real time departure information at the ‘Hoverbus’ signed bus shelter close to Portsmouth and Southsea station are all very reassuring. 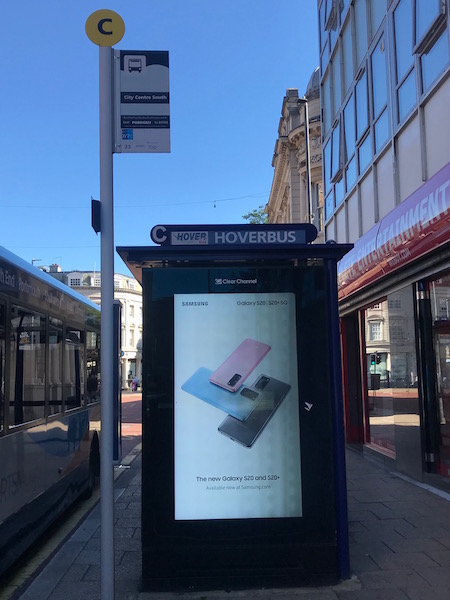 The bus timetable provides slick half-hourly connections with the hovercraft and it stops right outside Hovertravel’s terminal. 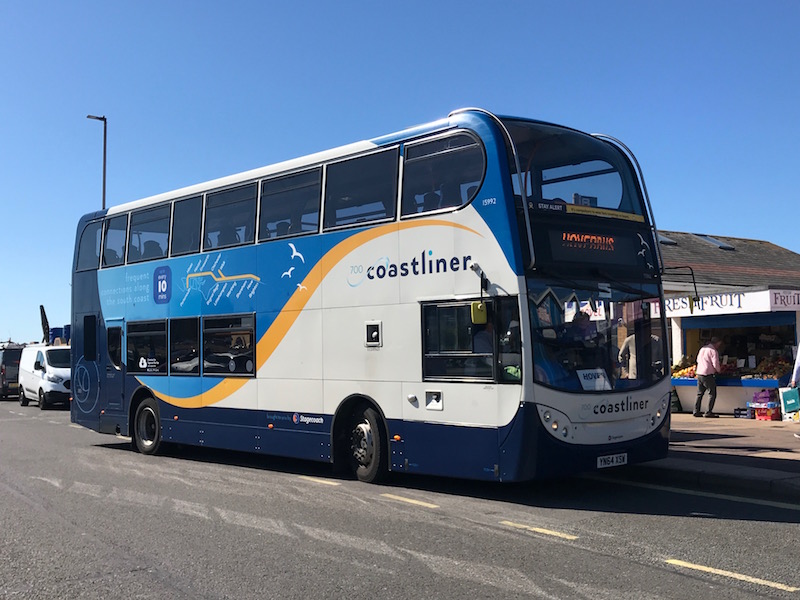 On arriving I realised one disadvantage of buying a through train ticket is that Hovertravel are currently operating a pre-booked reservation system for each departure to maintain social distancing capacity so those of us ‘turning up and going’ had to queue on stand-by outside and wait our chances.

However it seems there was a small problem with one of the doors of the hovercraft working the 10:00 departure so the second craft was sent over from Ryde which was handy, as after it was on its way, the door was fixed and the previously striken craft departed with prebooked passengers while an extra journey with the spare craft scooped up the waiting day trippers, including me, still outside.

It turned out I could have reserved a seat if I’d studied the Hovertravel website closely enough with a few click throughs (‘MoreInfo – SecureMyHover – Hoverttavel Non-online Bookable Tickets’) something definitely recommended as loadings pick up during the next few weeks which they’re likely to do.

A slightly later arrival into Ryde than I’d planned meant I missed the route 3 departure towards Ventnor at 10:20 but instead pursued Plan B involving ‘A Ride from Ryde to Ryde’ (Esplanade to Pier Head) on the Island Line to savour the 1938 vintage feel while it still lasts.

It’s a bit odd that the trains have continued running to Ryde Pier Head bearing in mind the Fast Cat ferry is still a Covid casualty.

The terminus was deserted and the train waited its layover in splendid isolation, other than for me and the crew.

On board a rather messy application of plastic tape was protecting the guard from passengers getting anywhere close and you wonder what those with a sight impairment or completely blind might make of it. I’m not sure whether all the health and safety issues have been fully thought through here!

I took the train back down the line to Shanklin and noted there was plenty of space in the rest of the train for the few passengers travelling to keep their social distance. Inevitably from that taped off guard area there were no tickets sold and no tickets checked during the journey. That’s not going to help the deficit. 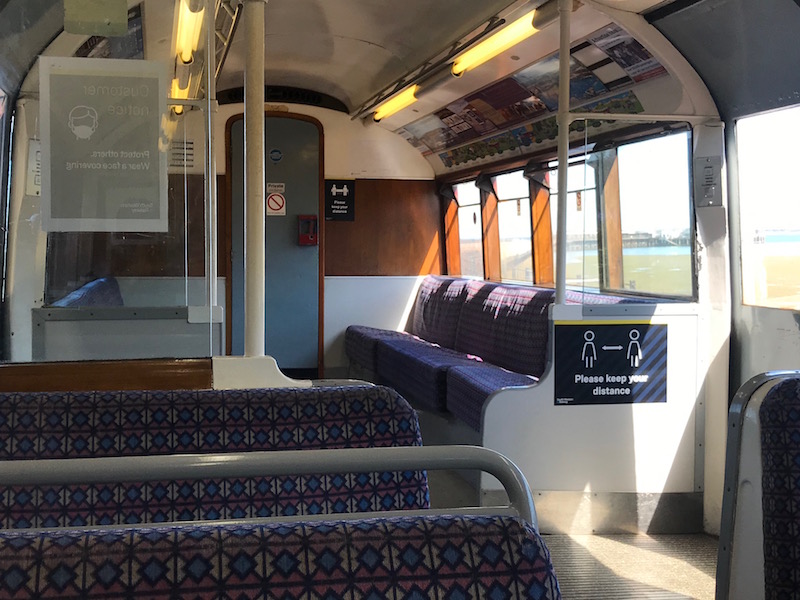 One of the kite flying ideas shortlisted in the first tranche of Beeching restorations set to receive money to work up a potential business case is an extension of the Island Line down to its original southern terminus in Ventnor, abandoned in 1966. It’ll never happen and Southern Vectis’s half-hourly route 3 stops right outside the station in Shanklin and soon gets you to Ventnor’s town centre (which the railway never reached, terminating way up in the cliffs) including spectacular coastal views along the way too. I always enjoy that part of the route.

The main stop in Ventnor outside Boots is currently out of action due to a narrow pavement causing social distancing issues so buses are using the stop round the corner in the one-way system in Albert Street.

Route 3 continues into Newport via Wroxhall and Godshill but I changed buses in Ventnor to take the more circuitous route on the five/six-journey-a-day route 6. This normally takes in a circle south of the lovely village of Niton via the Buddle Inn but as it’s now also operating with double decks to increase capacity this part of the route has been temporarily abandoned due to low hanging trees. 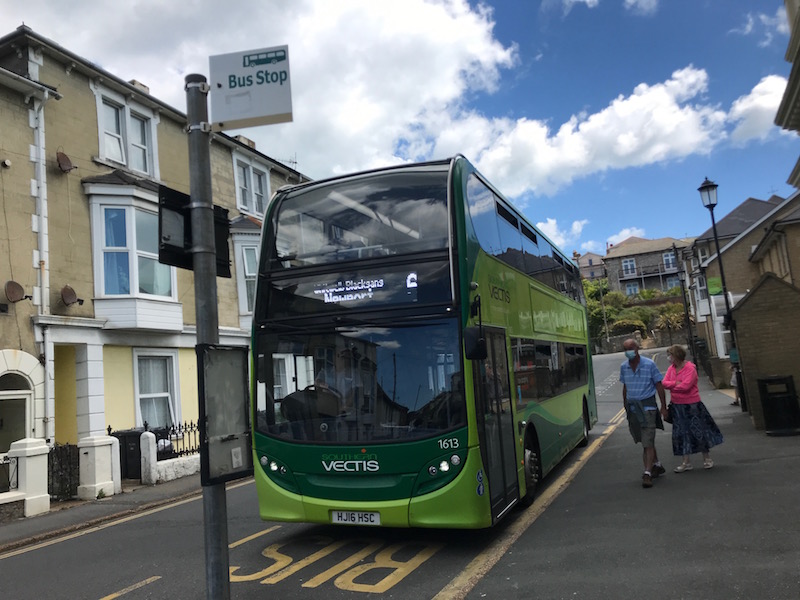 I doubt many passengers are impacted and further along the route we dived down to serve a deserted Blackgang Chine. We only carried around 8-10 passengers in total travelling on various sections of the whole route. I was the only through passenger, not surprising in view of the indirect nature of the route.

Newport bus station has had a socially distanced makeover. Some bus stops are out of use and a few routes are now departing a short walk away from the adjacent Church Litten. 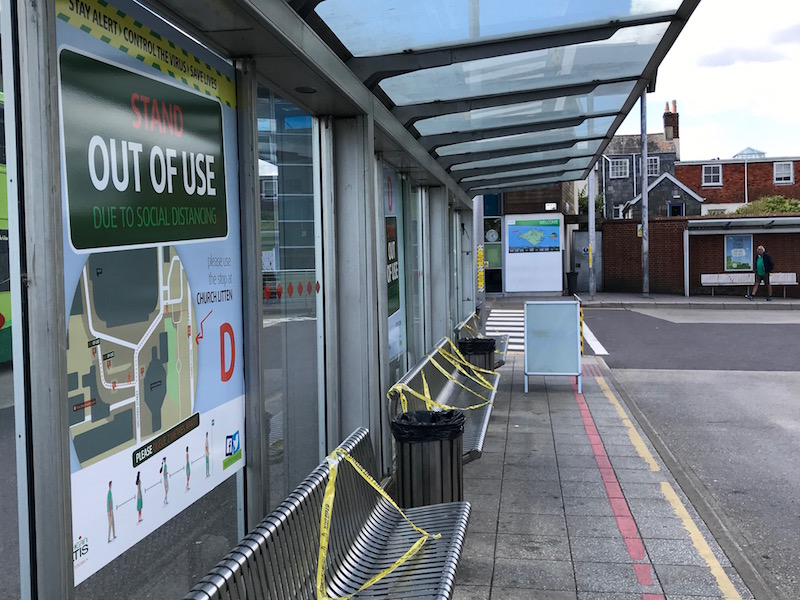 There are prominent signs letting you know about this but I left it too late to work out what was occurring and before I realised exactly where Church Litten was (despite the hit-you-in-the-eye maps) my next intended departure on the six-journey-a day-route 12 to Freshwater, Totland and Alum Bay in the west of the Island was already departing.

Never mind, there’s always plenty of other options to explore the Island by bus and as it had been a while since I’d been round the far eastern side I settled on the hourly route 8 which takes in Sandown before a grand tour of Bembridge and Seaview. It was a good run, albiet quite quiet for most of the journey. 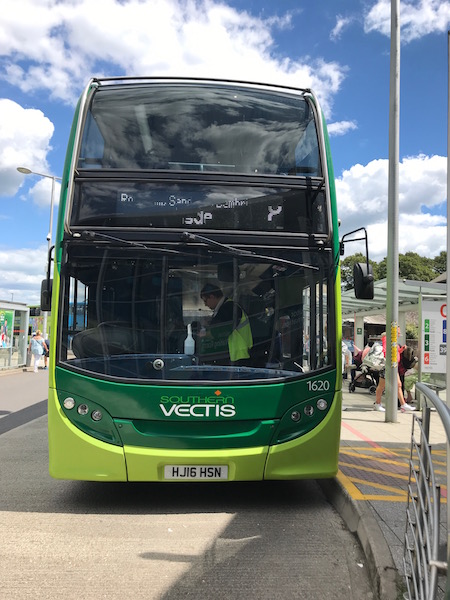 It was good to see Southern Vectis has drafted ‘Vectis blue’ branded buses, usually deployed on school bus routes, on to the general bus network so that extra capacity is available. I didn’t see any single decks in service at all. 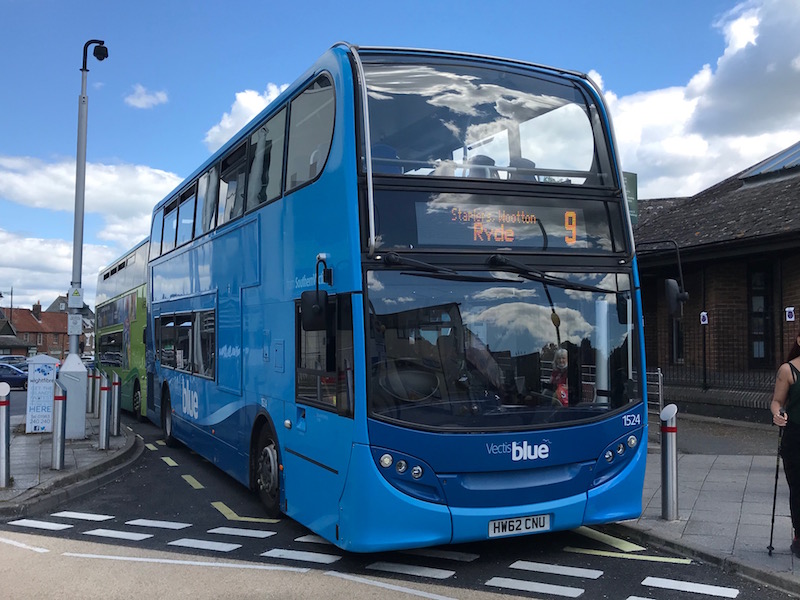 It’ll be interesting to see how passenger numbers build back up as the Island reopens offering leisure opportunities for the rest of July and August, and whether the on board 50% socially distanced Covid capacity will be enough to cater for everyone, especially on the less frequent routes.

It’s a shame the excellent Southern Vectis timetable book isn’t available. I enquired through the window slot of the closed waiting room/travel shop in Newport bus station and it was explained it’s not possible to hand out paper in the current circumstances – makes you wonder how newsagents and bookshops are coping – but all timetables were posted on the glass window of the waiting room (which being smokey grey doesn’t help much) and, of course, are available online. 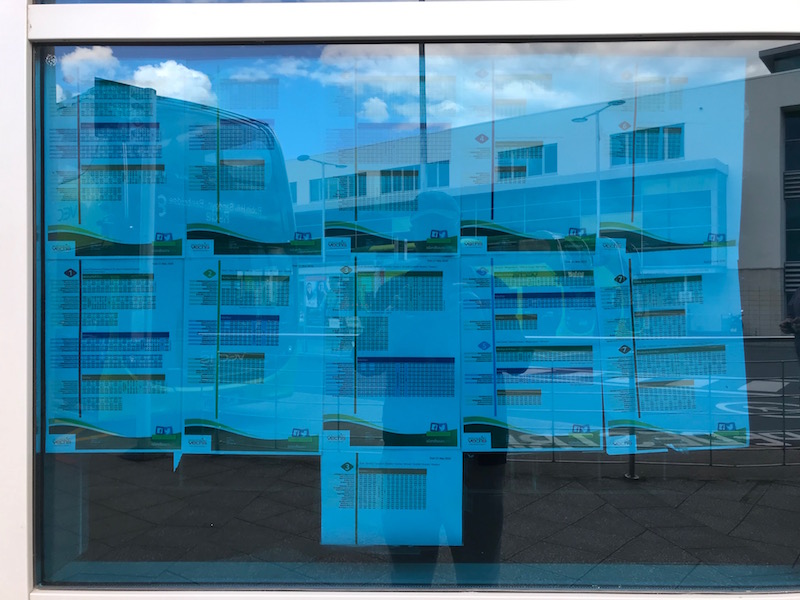 Overall, Southern Vectis continues to do a good job in these challenging times. If passenger numbers don’t come back to normal levels soon, it will be sad to see inevitable reductions in the network for the upcoming winter to get back to commercial viability. The current timetables and frequencies really are a work of art. And it will be the ultimate irony if we end up seeing cuts in bus routes at the same time as money is squandered on that pipe dream of extending the Island Line, lovely though it is. 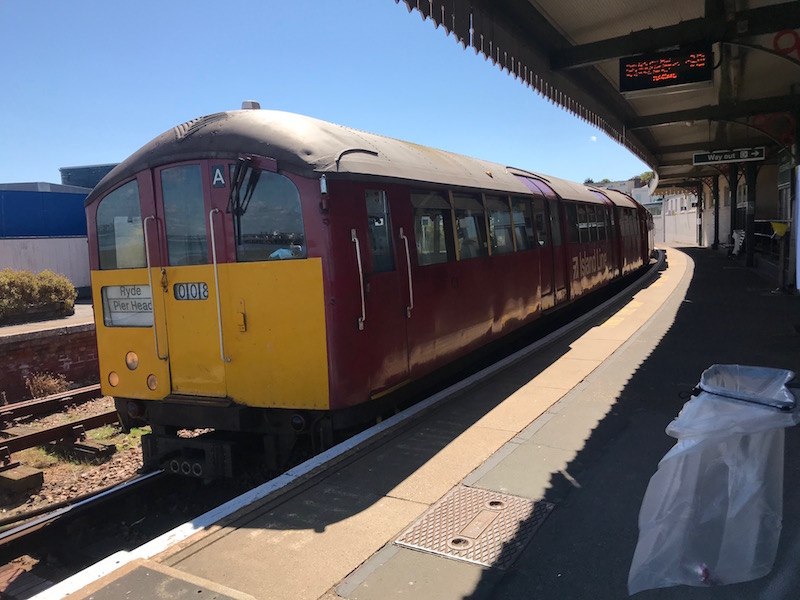 BusAndTrainUser – journeys around Britain by bus and train Day trip to the Isle of Wight
%d bloggers like this: