Hull Trains introduced its first Hitachi built Class 802 train three months ago and as four of the five seat sets on order are now with the Company, it seemed a good time to take a ride and see how they differ, if at all, from similar trains run by GWR, LNER and TPE (TransPennine Express).

The short answer, unsurprisingly is: not a lot. But keep reading for a bit more of a review. 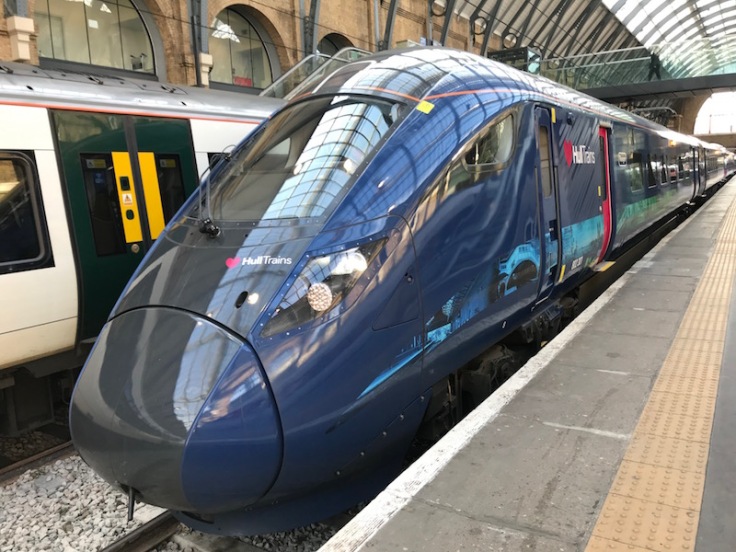 They’re bi-mode trains enabling electric running on the East Coast Main Line and diesel mode for the section between Doncaster, Selby and Hull; it was evident on my journeys this morning how much faster they are, particularly acceleration, than the diesels they’ve replaced.

My train at 09:48 from Kings Cross passed through Potters Bar after just ten minutes and was a minute early when we got checked near Welwyn viaduct having caught up the 09:21 stopper from Kings Cross to Cambridge which had slipped to being three minutes late; such is the intricate timetabling at this congestion hot spot on the East Coast Main Line.

We soon got going again and sped along non-stop to Grantham the first northbound station served in just an hour and two minutes from Kings Cross. The train arrived into Hull spot on time at 12:18. 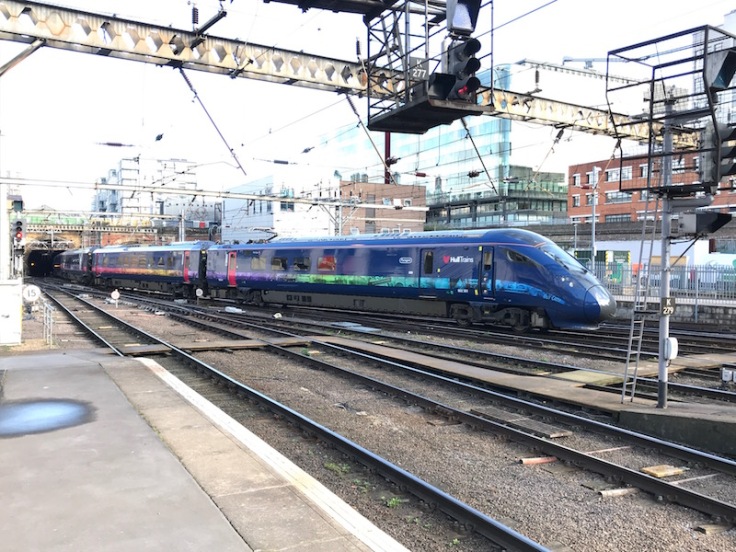 Hull Trains have christened their Class 802s ‘Paragon’ after a competition among staff to find a suitable class name. 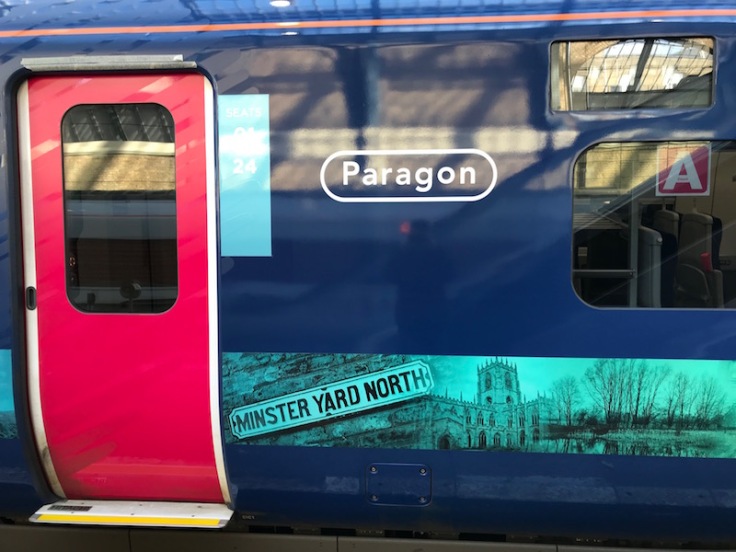 The Hull Transport Interchange is also known as the Paragon being sited opposite Paragon Street in the city centre. 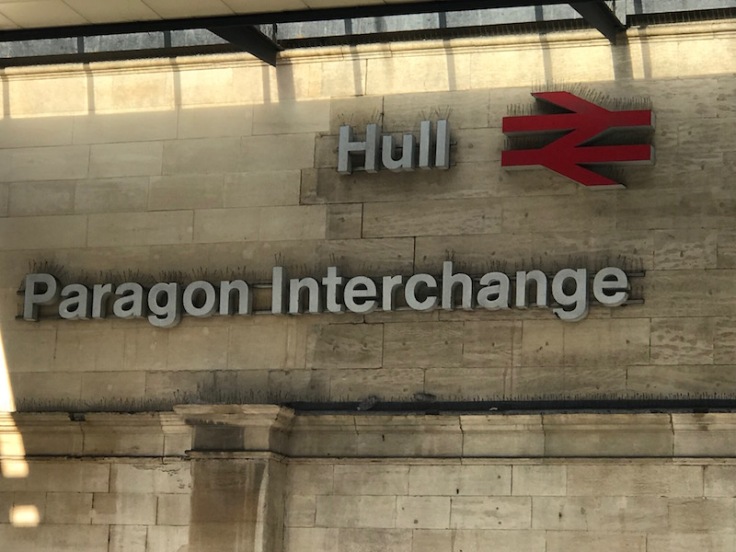 There was talk of naming each of the five trains too and the public were asked to email in their suggestions but so far there’s no news on individual train names.

I like the idea of honouring or commemorating a person with a named vehicle in passenger service. We had enormous interest in the policy of naming each Brighton & Hove bus after a deceased person who achieved something worthy in the community during their lifetime; a practice now embedded into that bus company’s fleet.

The trains have been painted in a smart dark blue colour scheme but with a rather dull grey/black front nose cone. Each of the five carriages includes a different coloured band below the windows including names of towns served along the route. The effect is rather impressive. 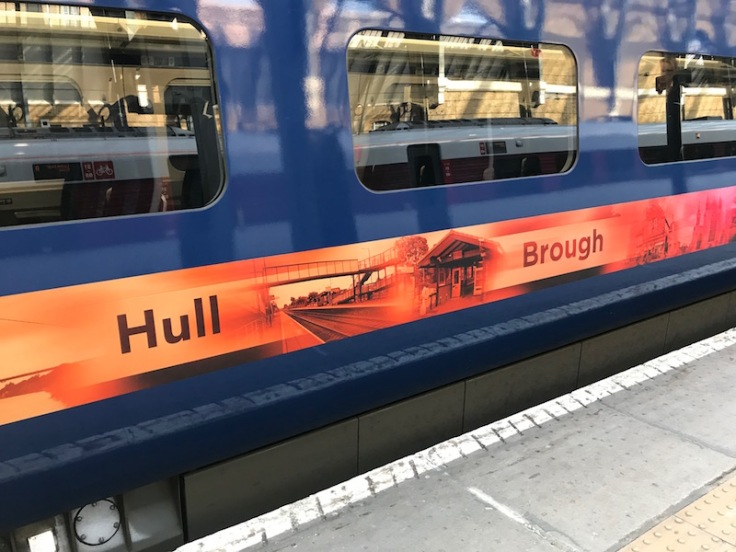 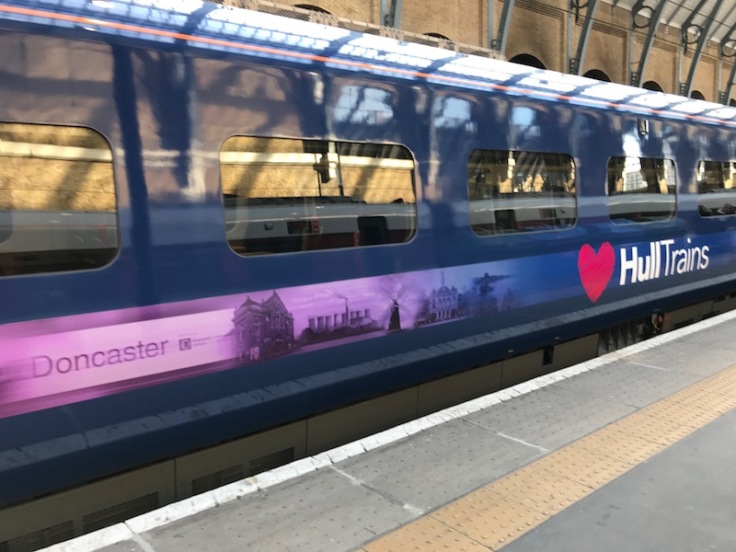 This includes Stevenage where only a couple of southbound and one northbound Hull Trains journeys stop on a Sunday evening – not sure why those do so.

Mind you it also includes reference to Carnaby Street and Buckingham Palace and trains don’t call at those destinations at all. 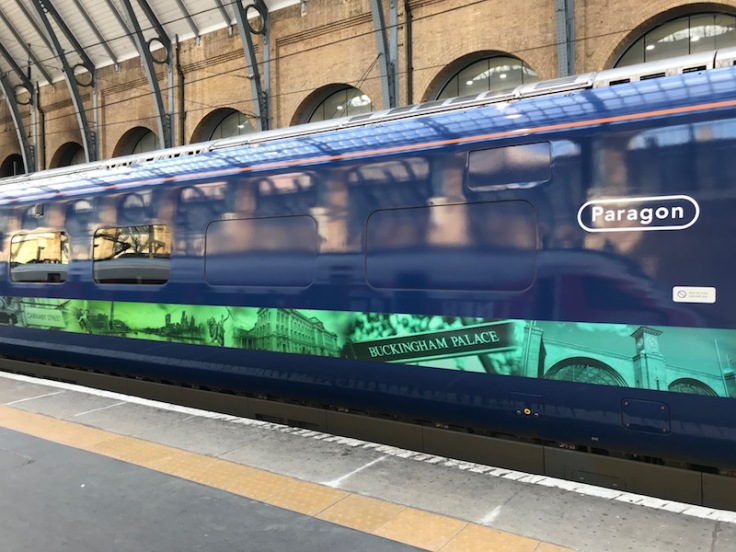 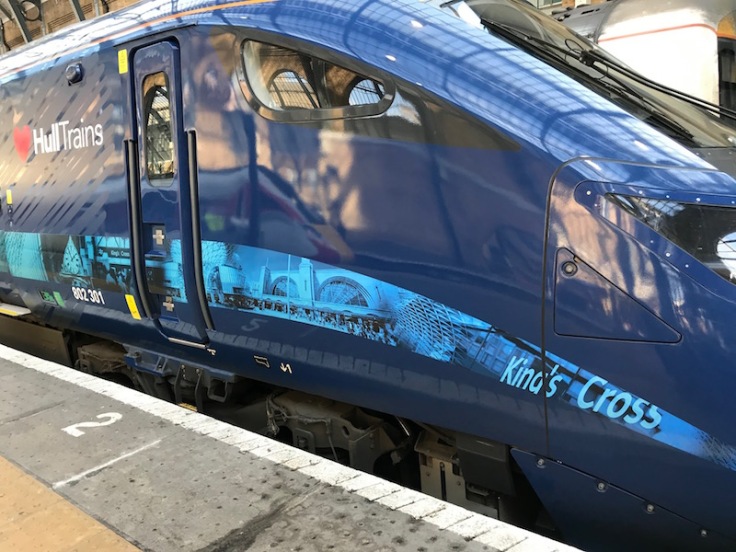 IETs and Azumas have the DfT’s meddling hands all over their design, particularly on seat quality, whereas Hull Trains, being an open-access operator, had complete freedom to specify whatever they desired for their Paragons.

The basic layout of the Paragon is very similar to a five coach Azuma/IET/Nova 1. There’s first class in Coach E after the galley/kitchen (behind the driving cab) and also in half of Coach D; the rest of Coach D with C, B and A are standard class. 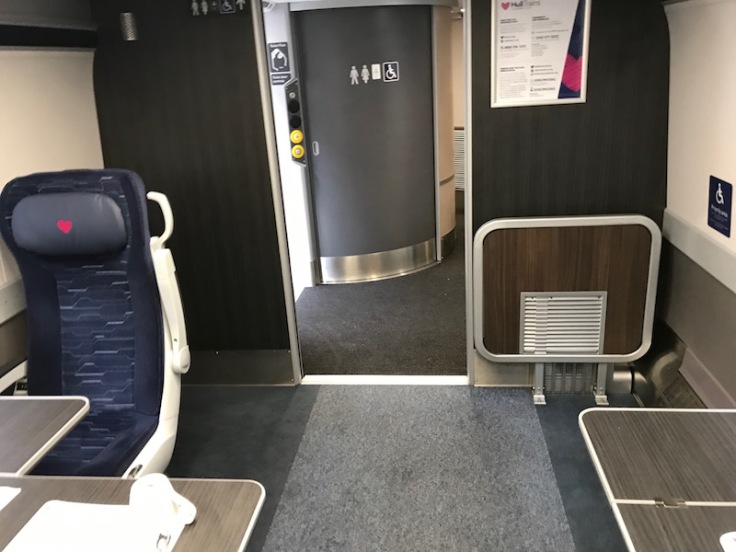 There are two accessible toilets at the inner ends of Coaches D and A with a space for wheelchairs close by. 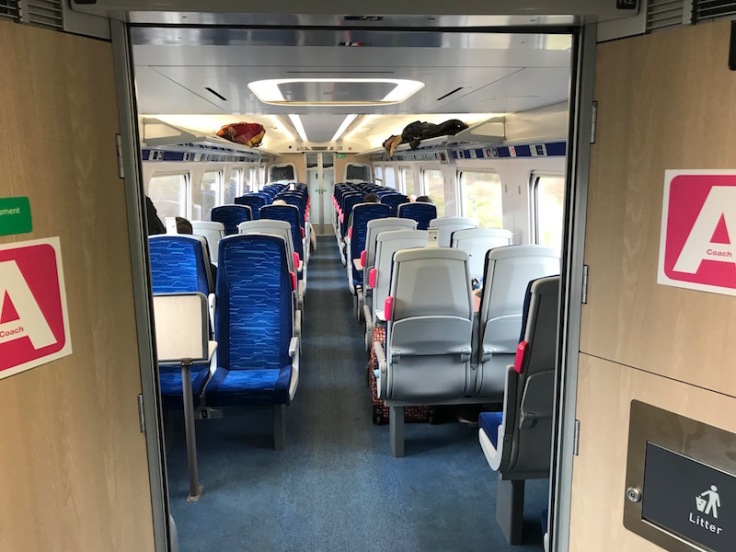 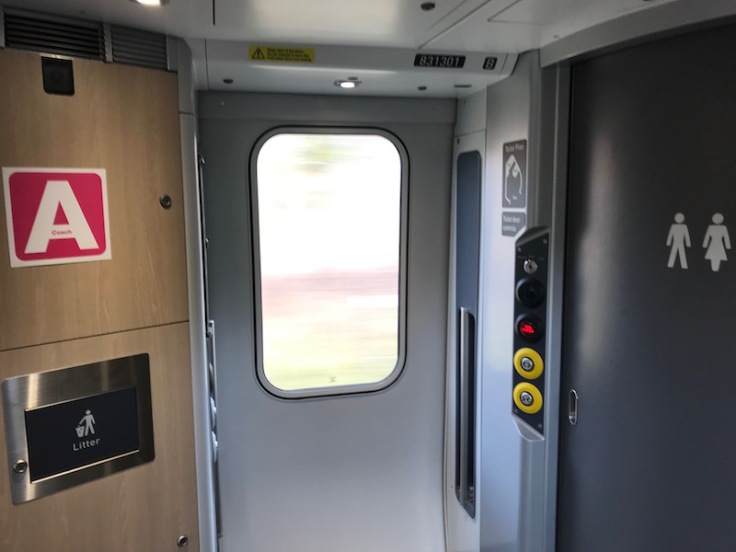 Other standard sliding door cubicle type toilets and a lockable storage cupboard are at the ends of the other coaches.

I quite like the ambiance created by the lighting and the blue colouring of the seats; it seems classier than the Azuma’s dark brown in first class and not as brash as the two-tone red in standard class. They’re brighter than the more wishy washy light blue of the Nova 1. Anything is better than the dull grey in the IETs. 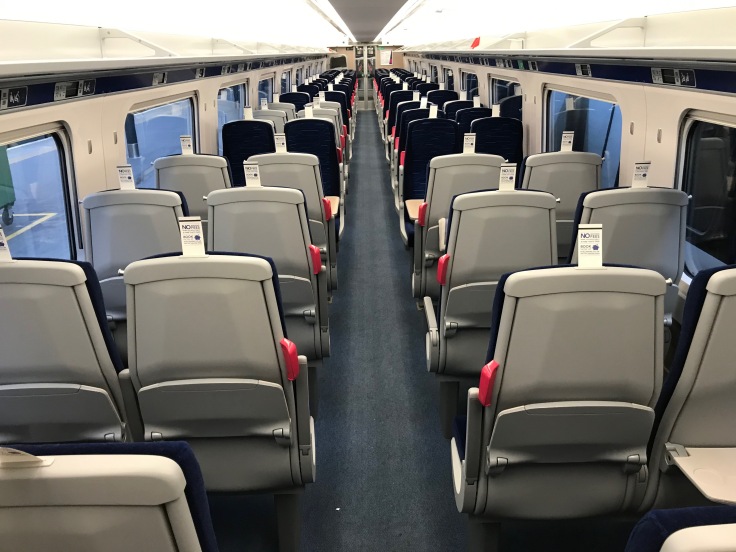 I’m not sure whether the actual seats are the same or not; they felt more comfortable in both first and standard class which may be due to the slightly thicker moquette used. 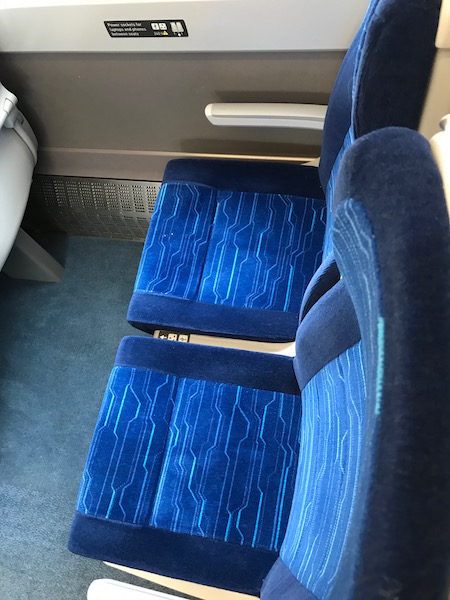 The headrests in first class were definitely better and squidgier – if you like squidgy headrests, and I do.

There are grope-able sockets (three pin and usb) under the seats in standard class and alongside the armrests in first class.

Tables are liberally spread through each coach and not a bad job’s been done on lining up seats with windows. 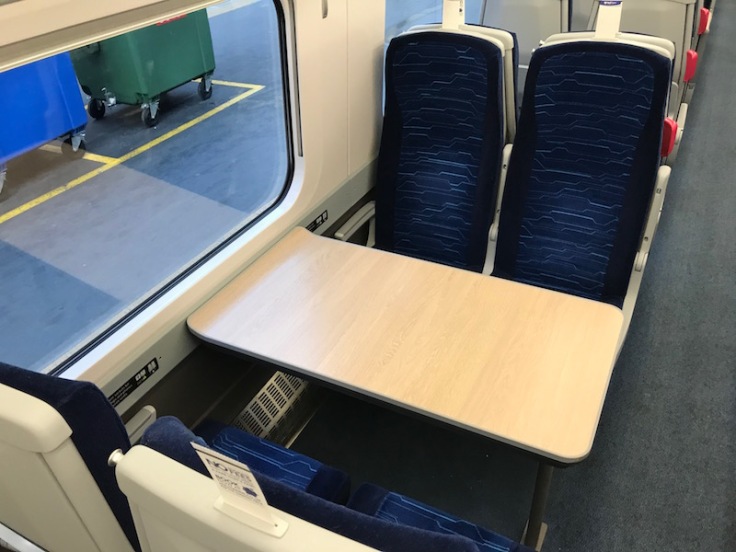 Bearing in mind LNER’s experience and that these weren’t trains spec’d by civil servants I’m surprised Hull Trains didn’t use the ‘dead’ window space for more much needed luggage racks; as LNER are now retrofitting.

Any regular passenger can tell you increasing quantity and size of luggage in trains is really becoming an issue.

I noticed the aisle grab handles alongside the seats are in a distinct shade of Barbie pink (reference to First Bus’s erstwhile bland livery) but their position for me is completely useless as I don’t use my arms at that level when walking down the aisle.

There are traffic light seat reservations but these weren’t working on either of the two journeys I made today.

… and heading south someone had used a fleet pen to mark the seat number. It all seemed a bit odd and unprofessional.

Like GWR’s IET there’s no buffet bar (there is one on LNER’s Azumas) but unlike GWR the trolley actually came round and when it was static between Coaches A and B there were clear announcements to let everyone know.

Hull Trains runs seven return journeys a day between Hull and London Kings Cross with two early morning journeys starting at Beverley and returning there in the evening with one doing so at weekends. It’s an approximate two-hourly frequency.

Although Hull Trains now have five Paragon train sets the current timetable can operate with three sets; except the 19:08 departure from Hull (which overnights in London) is a bit tight working off the 18:41 arrival in Beverley which then rushes back out of service (ECS) to Hull ready to leave at 19:08.

Hull Trains regularly scores well in the Transport Focus passenger satisfaction surveys (92% in the last survey behind only Grand Central and top of the chart Heathrow Express) and my experience today was all good. Obviously it helps to have a self contained standard timetable and generous spare train allowance. However prior to the Paragons arriving the Company faced a difficult time of it last year with unreliability of the Adelantes and there were regular journey cancellations.

It looks like that’s all in the past now and a good thing too. A ‘paragon’ is defined as ‘a model of excellence’. I’m not sure that completely holds true of an Hitachi Class 800/802 express train. Speed yes, but ultimate comfort and wow factor, no; but credit to Hull Trains for making these a decent train to travel in as best they could. I’m still with CAF and Stadler as the best new trains around at the moment. 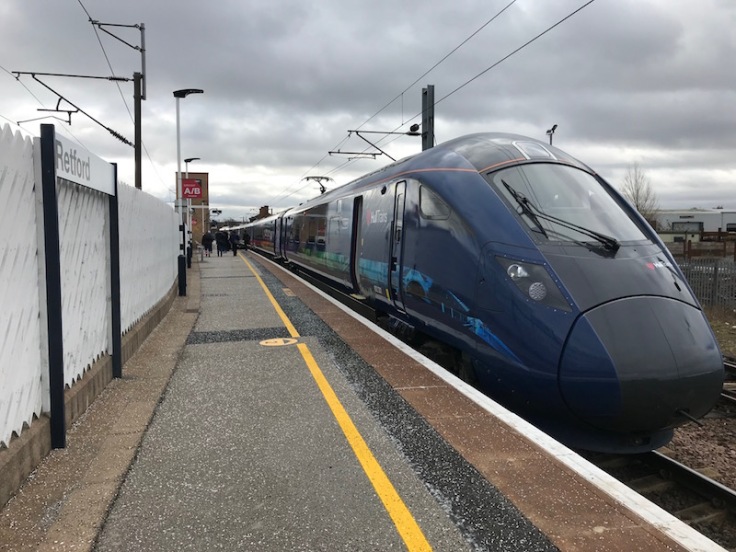