My travels today once again involved sampling more impressive shiny new buses from First Bus but this time with a few unexpected experiences along the way. Read on for a mixed bag report.

They’re very similar to the 19 buses introduced on Monday by neighbouring company First Eastern Counties on its ‘excel’ branded route between Norwich and Peterborough. These are also ADL Enviro400 bodies on a Scania chassis but not as highly spec’d as those ADL ‘City’ models with their classy offside clear glazed staircase.

The Best Impressions influence both externally and internally is clear to see again with almost the same features as on the ‘excel’ buses except the seat headrests and their complimentary coloured leather stitching are light blue instead of red and they wear a two-tone bright blue livery on the outside. 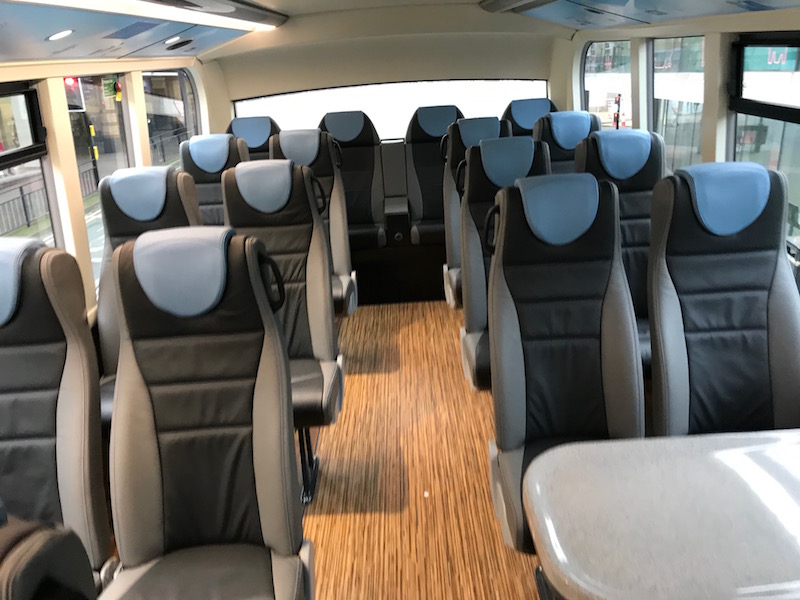 … but these have an all important large luggage rack in the lower deck front offside just after the staircase for luggage laden passengers travelling to the airports (the route serves both Southend and Stansted Airports).

There’s a monitor on the upper deck displaying pictures from a camera trained on the rack so passengers can be reassured their luggage isn’t departing without them.

They also come with the latest wing mirror-less camera technology.

Today’s travel experience was all about those other passenger touch points and how it feels to be a passenger when things done quite work out as expected.

The X30 route runs hourly between Southend and Stansted Airport with a journey time just under 100 minutes. It runs on a limited stop basis including Southend Victoria Circus for the station, a small diversion to serve Southend Airport, some stops in Rayleigh then non stop to Chelmsford, then on to Stansted.

Not long after Rayleigh Station the route is joined by the hourly X10 which starts in Basildon and from Chelmsford provides a coordinated half hourly frequency with the X30 to Stansted Airport. Except oddly in the southbound direction it’s an uneven 20/40 frequency as the X30 has around 20 minutes layover at the Airport but the X10 only gets 10 minutes – as it does in Basildon so any extra stand time at Stansted to even up the southbound frequency would cost a bus.

On the strength of today’s experience the X30 certainly needs its much more generous 40 minutes stand time in the cycle (20 minutes at Stansted and 20 minutes at Southend) due to road works on the A127 heading into Southend causing serious delays. 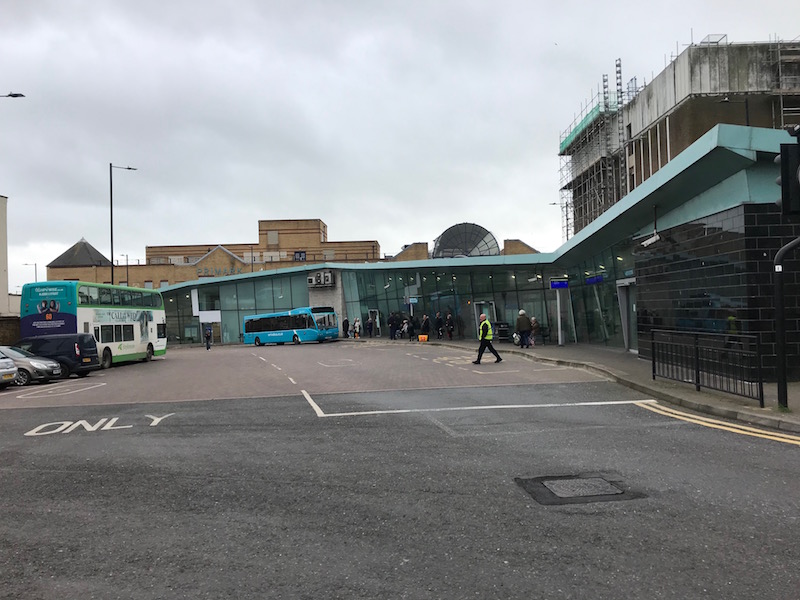 I arrived at what’s called Southend Travel Centre (I’m not sure why they don’t call it a bus station; as that’s what it is) in good time to catch the X30 departure to Stansted at 12:00  this morning. 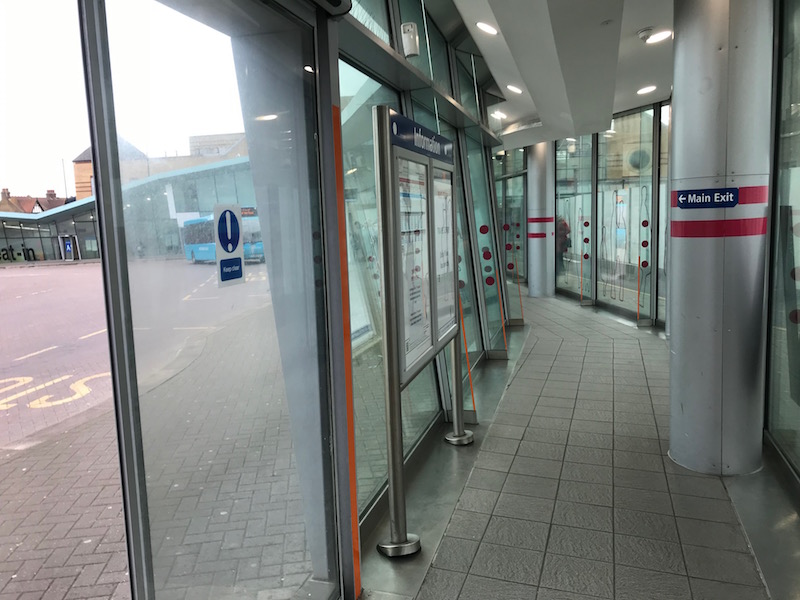 Arriva run a small Travel Information and ticket sales point on the rather confined bus station concourse where it’s made clear enquiries about First Bus (as well as other bus companies), and the X30 in particular, are not welcome.

This is a very short sighted and negative approach. Bus companies should be as helpful as possible to potential passengers even if it’s an enquiry about another bus company. This isn’t the highly competitive cut throat world of supermarkets, this is an industry struggling to encourage new passengers and modal shift and this type of isolationist approach doesn’t help at all.

The lady behind the glass did let me know where the bus stop for the X30 is located – which isn’t in the bus station (sorry, Travel Centre) at all, nor where other routes operated by First Bus depart – which is on some land adjacent to the bus station (photographed above).

No, the departure stop for the most prestigious X30 route is outside the bus station on the roadside where there is a bit of shelter under an overhang and just four rather exposed seats from where there’s no view of the real time sign (not that it is real time).

There’s a rather grotty departure board which doesn’t inspire or create desire.

So midday came and went, there was no sign of my 12:00 bus; it disappeared from the not-real-time-electronic board and I’m left wondering whether it’s cancelled or seriously delayed. 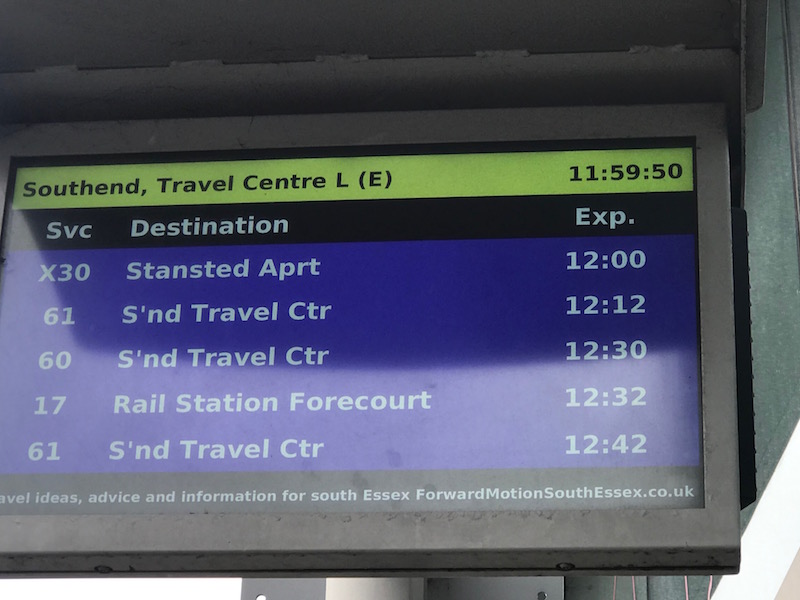 I checked when it was due in from its previous journey – at 11:37, which adds to the unease.

I know it’s no use enquiring of the one human face representing buses on site, sitting behind the glass a few feet away, as she would definitely draw the line at enquiring somewhere like a bus control centre about a missing First bus, so I decide to go online (as we’re always encouraged to do by out-of-touch corporate-speak people) to see if there are any updates on how the X30 is doing. There aren’t, and the First Essex Twitter feed’s only announcement for the entire morning is to advise of a cancellation on route 31X at 09:25 from Burnham-on-Crouch due to a mechanical issue.

I send through a tweet at 12:03 enquiring about the whereabouts of the 12:00 departure.

Back comes a reply at 12:10 wrongly telling me the ‘service is not stopping at the stop you are at’ and advising that I head off to Victoria Circus. If the route was officially curtailed back at Victoria Circus it would have been better to have sent out a tweet about this with the reasons why, but I don’t believe the response.

It’s just as well I’m aware for some complete nonsensical reason First Bus think it’s a good idea to centralise all their UK Tweeting in Leeds when it’s quite obvious to a five year old that’s not how you deal with detailed local bus enquiries like mine. So I know to ignore this incorrect advice especially as three minutes earlier, at 12:07, the bus had finally arrived 30 minutes behind its scheduled arrival time.

About a dozen passengers alight and to his credit the driver doesn’t even get out of his cab, takes the four of us waiting on board and leaves soon after 12:10, now only just over ten minutes late.

I ask him if there are delays ahead and he explains about the roadworks on the A127. I’m glad I haven’t relied on the X30 to connect with  a flight.

I settle down in the front offside seat on the upper deck and immediately realise this is a mistake with its upright back and hard cushion but I decide to persevere to get a good view of the promised roadworks ahead.

We do a tour of Southend Airport picking no one up and then hit the roadworks. Luckily they’re not too bad in our direction and we only lose about ten minutes making us 20 minutes late.

We pass the next bus for the 13:00 departure from Southend struggling through the queues in the other direction and it looks like it’ll also be around half an hour late arriving into Southend.

We pick three more passengers up through Rayleigh and three more at Rayleigh Station and then head off non-stop to Chelmsford.

It was good to hear Essex accents expressing delight at how posh the buses are as they boarded as well as noting the lateness of the bus.

Until Rayleigh Station the audio visual next stop screen and announcements had been working, albeit like on ‘excel’, with the directional arrow pointing incongruously the wrong way. The volume of the announcements seemed far too loud to me, even if it had been to a full bus of people chatting away. 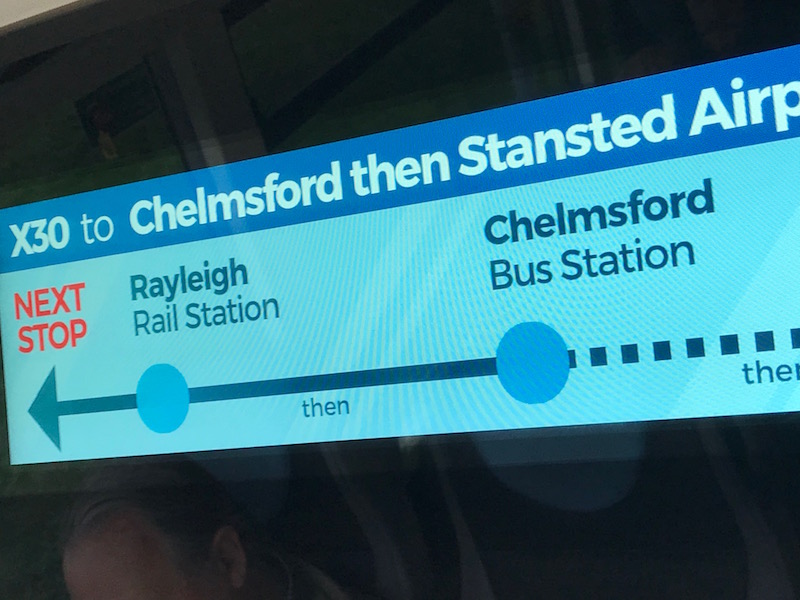 Sadly the GPS froze as we approached Rayleigh Station which was announced as coming up a few minutes after we’d left and then the screen stayed unchanged for the rest of the journey and Chelmsford wasn’t announced. 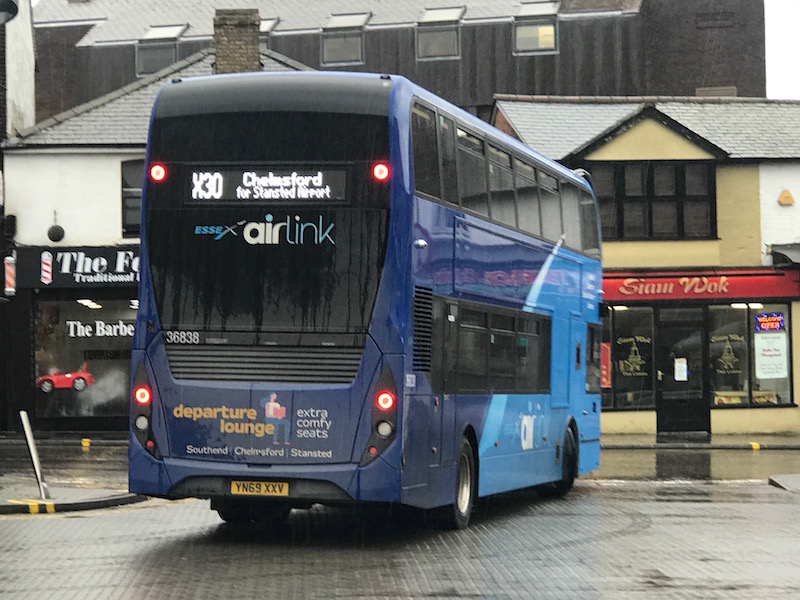 I decided to alight in Chelmsford bus station and wait for the following X10 to compare and contrast. By then the X30 was still running late, leaving at 13:27 instead of a scheduled 13:05.

The X10 is due into Chelmsford at 13:30 and departs at 13:35 so there was just time to dash into First Essex’s Travel Centre just in case someone had had a dose of common sense and decided on producing a printed leaflet to promote the newly branded ‘ESSEX airlink’ bus route with times and ticket prices. 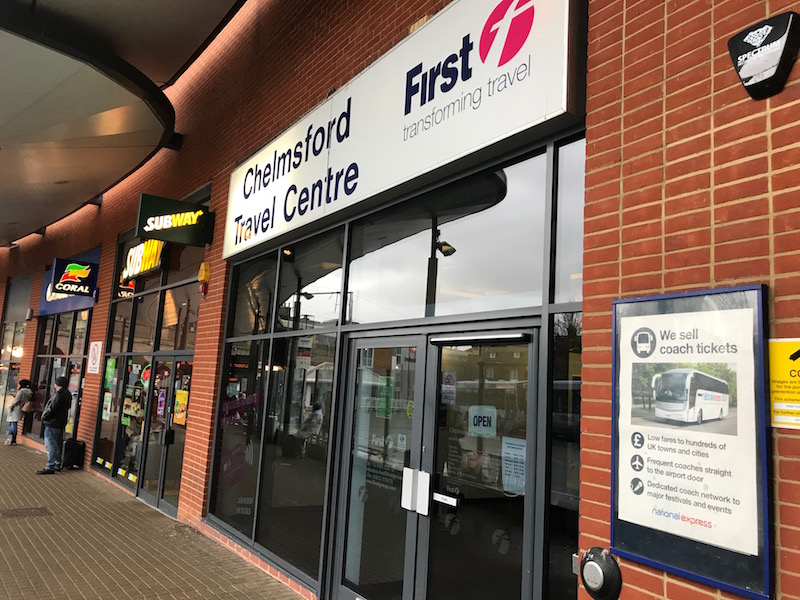 Alas not; I was told quite firmly ‘we no longer do printed timetables’ and with misplaced pride adding ‘we’ve gone paperless’.

There were a couple of pop-ups promoting the new service so they haven’t gone entirely printed material free.

The X10 arrived just after 13:35 and after half a dozen or so alighted, three of us boarded and joined the five passengers staying on board.

We didn’t pick anyone else up on the relatively trouble free 24 minute journey to Stansted Airport (we lost about three minutes due to more roadworks) where all eight of us alighted as did the driver briefly before getting back on board with the four new passengers and he was away back to Basildon on time at 14:20.

We’d passed the 14:00 departure on the X30 bound for Southend just as we got to the Airport so that was destined to be well late by the time it got back to the seaside town through those roadworks again. 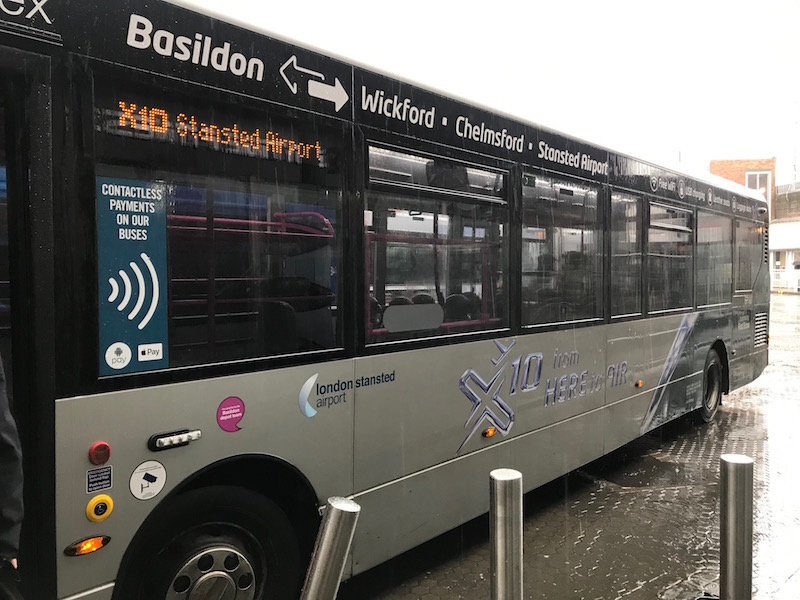 The X10 single deck bus still carries the previous ‘from HERE to AIR’ branding used before the X30’s makeover. I understand there are plans to repaint these single decks into the new ‘ESSEX airlink’ livery and indeed one has already been done but I didn’t spot it today. In the meantime it’s a bit of a brand mash up with two different styles and names on what’s advertised as a coordinated timetable. 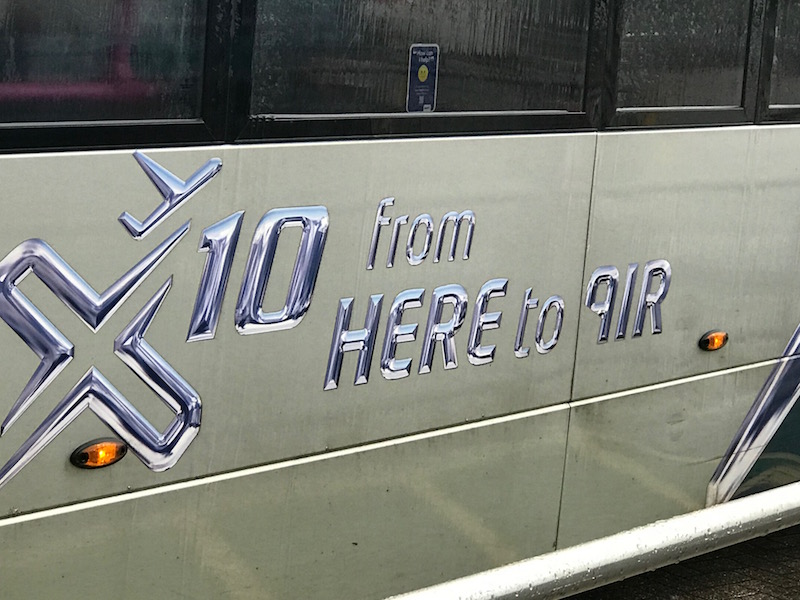 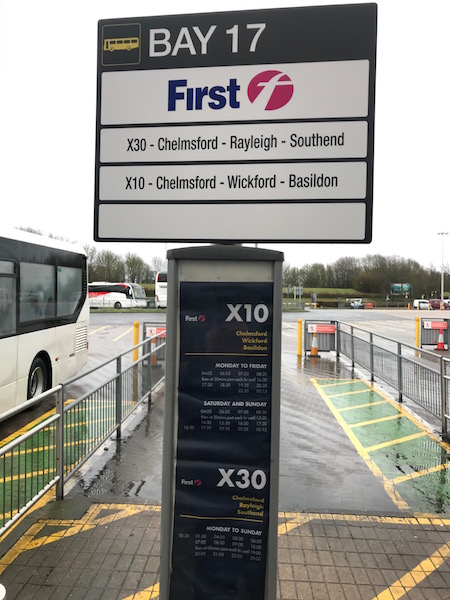 …. and online, there’s another mash up of both brands.

The buses used on the X10 are perfectly serviceable coming complete with very large luggage racks; much larger than on the new double decks on the X30  …

… and those elephant grey coloured leather type seats that First had a passion for a few years ago.

It’s a shame the entry into service of some impressive new vehicles is tarnished by the failure of these other touch points.

I noticed at 15:20 this afternoon the Tweeting folk based in Leeds tweeted a promotional marketing message extolling the virtues of the new buses and economy fares on ‘Essex Airlink’ (not the correct ‘ESSEX airlink’ – I know I’m being pedantic, but proper depiction of brands matter) between Chelmsford and Stansted where the X10 isn’t yet fully ‘on brand” and more to the point the tweet is completely oblivious to the fact that by that time service delivery on the road was in complete chaos – and still no mention of that on the Twitter feed, 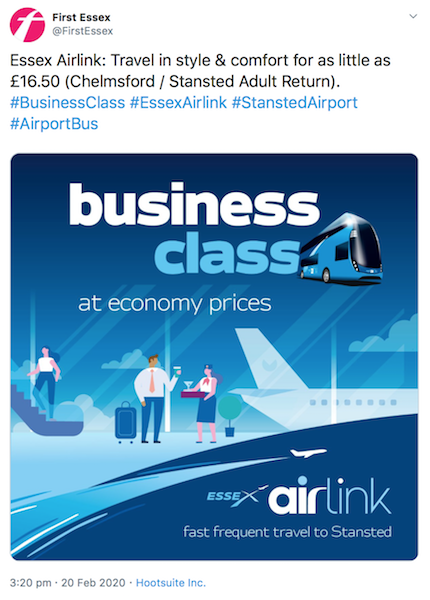 Frankly that just about sums up why First Bus struggles so much. Instead of putting out helpful information such as ‘all buses on our new ESSEX airlink branded X30 are experiencing delays of up to 30 minutes due to roadworks; we apologise for the disruption this will cause to your journey’ you get this nonsense remote from reality.

It’s about time this centralisation policy was abandoned. It clearly doesn’t work.

And to promote a new brand without any printed material is just complete bonkers.

You can have all the nice new buses in your fleet but if these other issues are not addressed you’ll carry on losing passengers – and deserve to.

The buses are nice though. 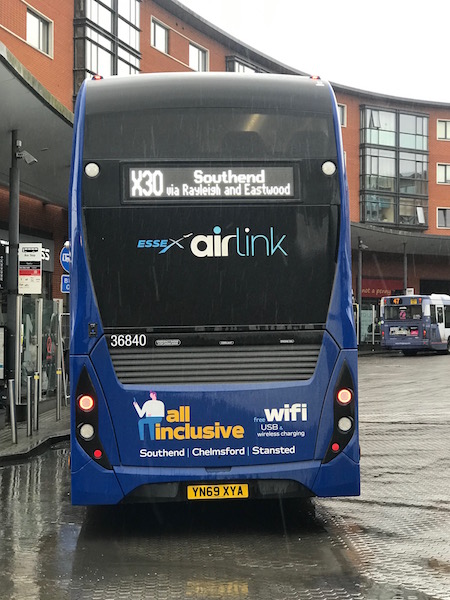