Actually these ‘beauties’ are not entirely British built as they’re Scania (model N250UD4x2s for those taking notes) with bodies built by Canadian owned ADL (model Enviro400 City). It’s a new chassis/body combination adding much excitement, for those who get excited about such things.

I got excited reading about all the great developments in the gushing coverage in last week’s trade press to entice passengers on board so took off to Norwich earlier today for a ride across to Peterborough on the new fleet’s first day into service.

It’s quite a few years since I last did this journey end to end – and that was when it ran even further into East Anglia; through to Great Yarmouth and Lowestoft. A real marathon of a journey.

The route was cut back to Norwich in 2015 and split into two sections at Norwich. That was two years after the last new buses were introduced on to the route, ADL Enviro400s, in a blue-come-purple based livery and kitted out with leather coach type seats.

First Eastern Counties have let Best Impressions’ Ray Stenning lose on the interior of this latest batch and his creative eye for detail can be seen all over.

… along with the modern way for high-spec buses, a seat back console incorporating usb and wireless charging points, a phone holder and a wireless bell push. 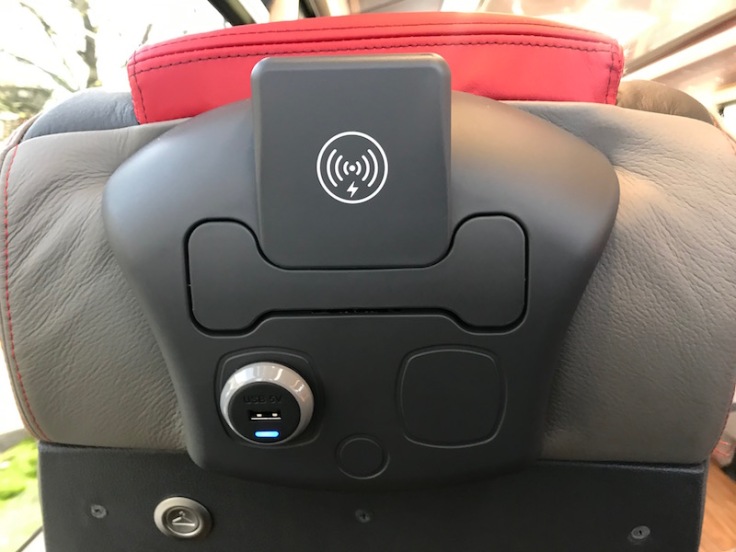 So now although the window view across the deck is a little obscured by the high seats, at least you can conveniently stare at your phone if that’s your gig.

The seats are way more comfortable than anything the rail industry can offer at the moment.

It’s a shame the cushions on the front offside seats on the upper deck are a little on the hard side; something I’ve noticed in other Enviro400 buses. 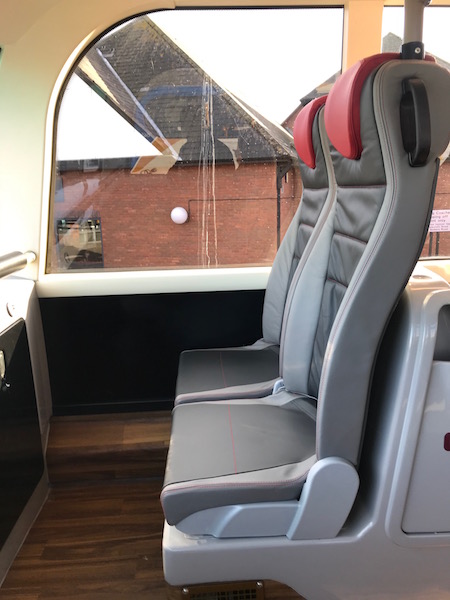 Other innovations becoming much welcome features in top of the range buses are the rear seats on both decks being reduced from a squashed-in five to a generous four ….

…. and in this case with padded armrest consoles incorporating usb charging points as well as the now almost obligatory, two tables for four on the upper deck.

There’s smart wood effect flooring with a different design and shade to denote the gangway – one of those small but very effective design attributes.

There are audio visual next stop announcements displayed in a nicely moulded-in screen at the front of the upper deck….

… although the arrow pointing to the left on the display is slightly disorientating as it’s pointing to where you’ve just come from rather than the direction of travel. Maybe this is an unintentional error? Also the date is five months out and the time about six hours ahead – otherwise they’re quite neat! 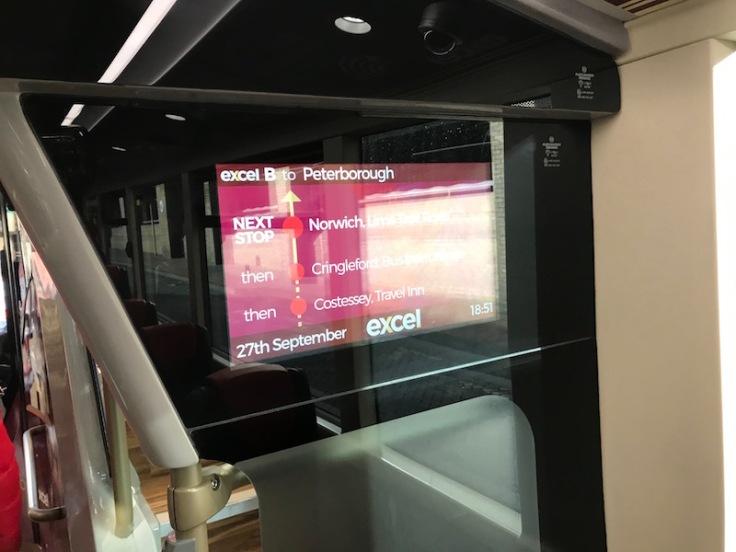 There’s also a screen on the lower deck which was also in another date and time zone.

… and these buses are also fitted with the latest ‘Vehicle Avoidance Lateral Light’ system giving the driver better sight of the clearance range when passing other vehicles. What will they think of next?

The new branding is a refreshing update on the darker blue-come-purple which adorned the previous batch of excel branded vehicles. 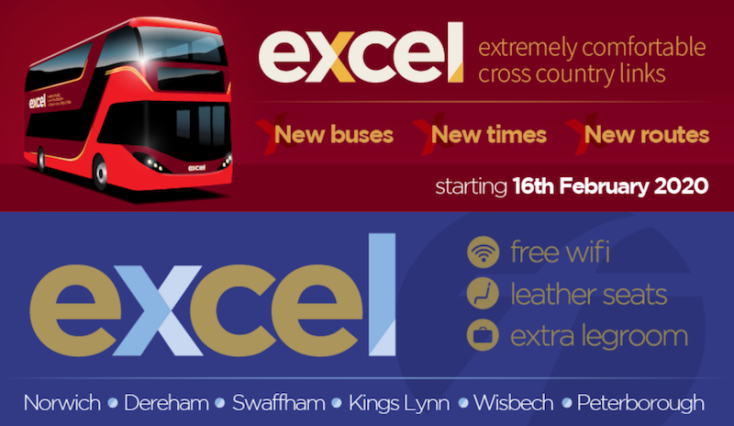 I hear that Kings Lynn based lynx have taken a close look at the updated ‘x” in excel, and reckon the style looks a little familiar! 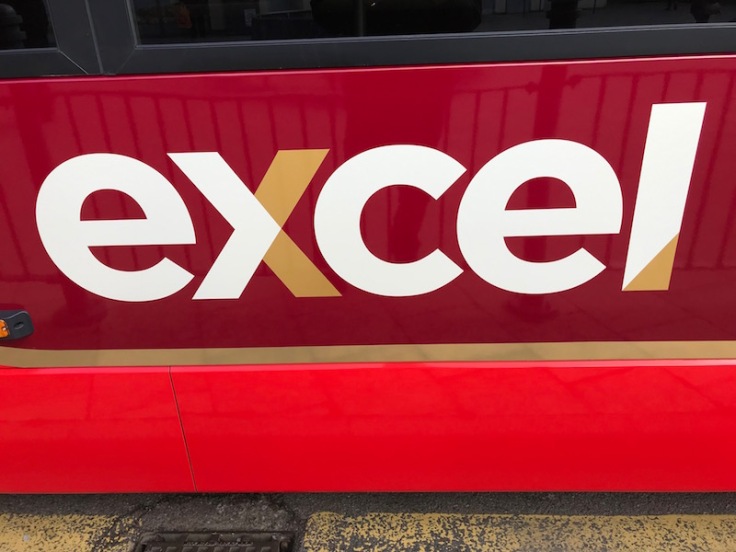 … and route diagrams displayed on coves and prominently on the stair panel.

As a passenger you feel hugely reassured you’re on the right bus and everything is coordinated and professionally delivered.

Which is just as well as First Eastern Counties have taken the opportunity to revamp the timetable to incorporate a few innovations. Three extra buses have been added to the route’s vehicle commitment allowing the introduction of two buses per hour running short journeys between Norwich and Dereham which, by bypassing Easton and Hockering, achieve a 35 minute journey time compared to forty for the one journey an hour which observes all stops and continues all along the route to Peterborough. 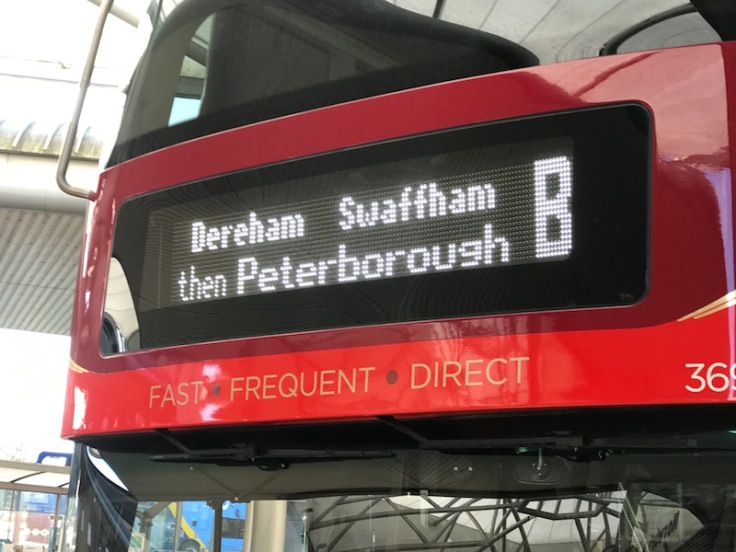 The other bus per hour to Peterborough now by-passes Dereham (as well as Hockering and Scaring) meaning it gets to Swaffham in a speeded up 55 minutes instead of the other ‘stopper’ journey each hour taking 70 minutes. That’s quite a saving for Swaffham folk travelling to and from Norwich. 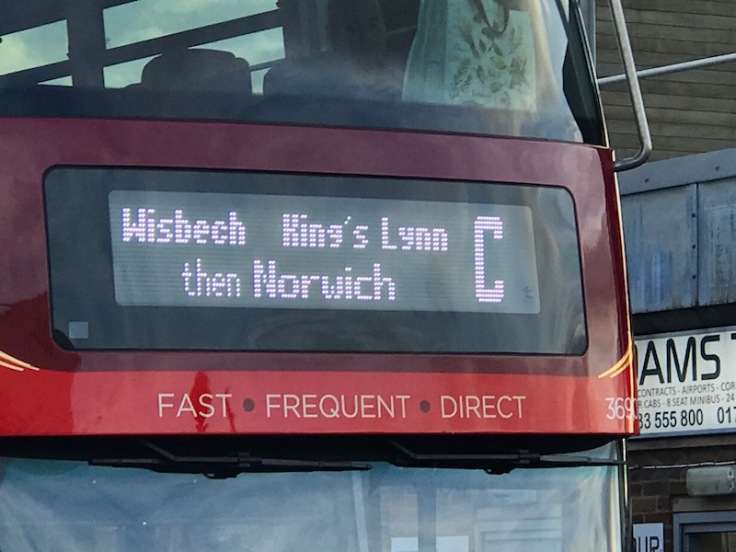 First now have three journeys per hour between Norwich and Dereham which matches Go-Ahead owned Konectbus ‘konectexpress Straight 8’ branded route which was increased to every 20 minutes last year with all three journeys per hour also running direct and taking 35 minutes. Dereham residents heading into Norwich have never had it so good.

On the other hand if they’re heading westwards to Swaffham they now only have one bus per hour instead of two, but I’m sure the new arrangements reflect relative destination demand.

To show these route variations, as well as another two more on the route west of Kings Lynn where more villages are bypassed on alternate journeys, the timetable has been annotated with different coloured lines and journeys lettered A, B, C or D to show the all stoppers compared to the village by-passers and the Dereham shorts. As mentioned earlier, these are also displayed inside the buses.

It’s a little tricky to follow but it’s a neat way to show what’s happening. (The ‘before’ and ‘after’ diagrammatic representations are shown below.)

Over the weekend I noticed National Rail hadn’t caught up with these changes. By a quirk of history Dereham is one of those towns listed in the National Rail database even though it doesn’t have a standard train service. Departures are advertised on the displays at Peterborough Station and you can book through tickets (to ‘Dereham Coach’) via Peterborough. However, the departures were still showing the previous half hourly departures from Peterborough Station on ‘excel’ at 14 and 44 minutes past each daytime hour, whereas from today it’s only the 14 minutes past journey which serves Dereham; the 44 minutes past being the new Dereham bypass journey.

Interestingly the National Rail journey planner also gives the option of travelling between Peterborough and Dereham by taking the East Midlands Railway train (eg at 45 minutes past the hour) to Norwich and connecting at that station to the Konectbus ‘Straight 8’ over to Dereham – which takes just nine minutes longer than taking the excel bus via Kings Lynn to Dereham. 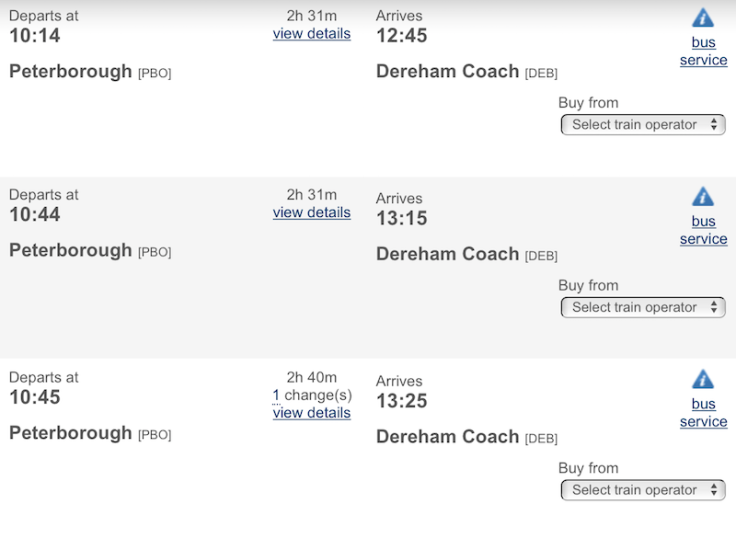 However I’m pleased to see this has been updated today and the 44 minutes past the hour departures from Peterborough are now showing as going to Swaffham rather than Dereham, which is correct. They don’t display Norwich as it’s quicker to take the EMR train. So ‘Swaffham Coach’ is now a regular destination displayed and available in the NR database.

Later afternoon and early evening journeys on the ‘C’ only go as far as Kings Lynn which are also correctly listed on the departure screen by the bus stop. It’s all very impressive.

So full marks to National Rail.

I arrived in Norwich this morning in time to catch the 11:00 departure to Peterborough. This is a ‘B’ meaning it takes the all stops route to Kings Lynn but misses out a couple of villages west of there giving an end to end journey time of 3 hours and 17 minutes. There’d been a short fast journey, labelled ‘D’, to Dereham (makes sense) at 10:45 (and another one was due at 11:15) as well as a by-passing Dereham fast journey to Peterborough, labelled ‘C’, at 10:40 (which has an end-to-end journey time of 3 hours and 7 minutes) so I wasn’t expecting lots of passengers to board with me. All the more so as last week’s timetable saw excel departures from Norwich at 10 and 40 minutes past the hour, so at 00, we were the new and, until today, unfamiliar time. Konectbus also has departures (for Dereham) at 10, 30 and 50.

In the event about a dozen passengers boarded together with my Twitter ‘almost namesake’ (@busandtrainpage) aka Steve who’s a very affable and knowledgable travelling companion around East Anglia and proudly has the claim to fame of being the very first passenger on the first new excel bus on the road out of Kings Lynn this morning … at 05.30!

We had a very pleasant journey across to Kings Lynn and it soon became obvious the running time is well suited to the travel conditions with a steady pace along what is a fairly windy and exposed low lying route across Norfolk’s Fenland. The timetable also incorporates stand time/recovery time in Dereham and Swaffham along the way.

The buses are a joy to travel in. The only noise this morning coming from the cross winds battering the A47. It was a smooth and comfortable ride.

I decided to break my journey in Kings Lynn (where there’s more stand time in the timetable) to see how the impressive Lynx Bus is doing and as always it was great to catch up with owner Julian Patterson, one of the bus industry’s top entrepreneurial small bus company owners who really understands the need for local control and an eye for getting the basics of punctual, clean buses with helpful drivers right day in and day out. It’s always impressive to see. 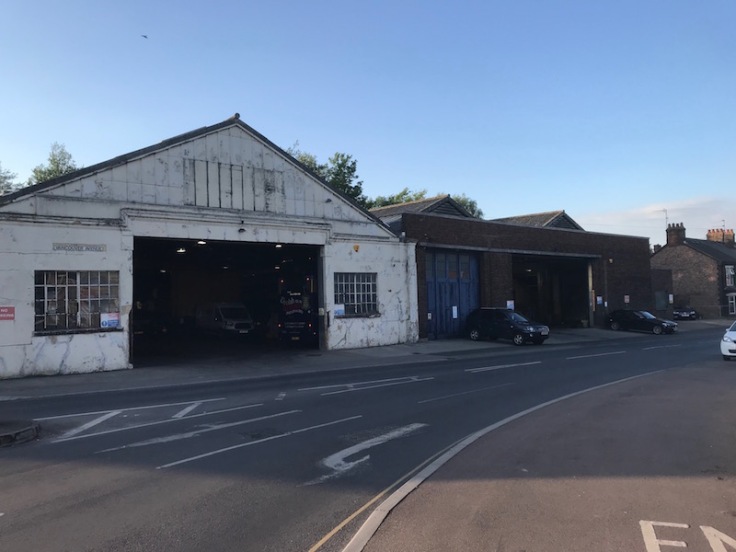 All nineteen buses are based at First’s bus garage in the town, parts of which are a hundred years old this year, and has probably seen better days. They’re the only buses allocated here nowadays and the site is part of a long term redevelopment scheme for the area which never quite comes to fruition.

Back in the bus station it was good to see impressive loads boarding lunch time buses during this half term week.

Not so long ago Kings Lynn’s buses were mostly (Norfolk) green but it’s now become a very red bus town. Although Stagecoach are using purple coloured buses shipped in from Skegness on their route 505 to Spalding – now its Kings Lynn outpost comes under the East Midlands and Lincolnshire set up rather than the Eastern empire in Cambridge.

After an hour’s break I continued my excel journey to Peterborough via Wisbech (more stand time) and enjoyed another smooth ride with the bus keeping well to time and with a good load on board.

We arrived in Peterborough and having seen timetable cases all along the route displaying up to date rebranded excel departure information my final task was to see whether the departure stop at the station had been updated as on previous visits I’d noticed a complete lack of timetables for the route.

I’m pleased to report there is indeed a timetable case conveniently sited on the Belisha beacon by the bus stop so all’s well that ends well. 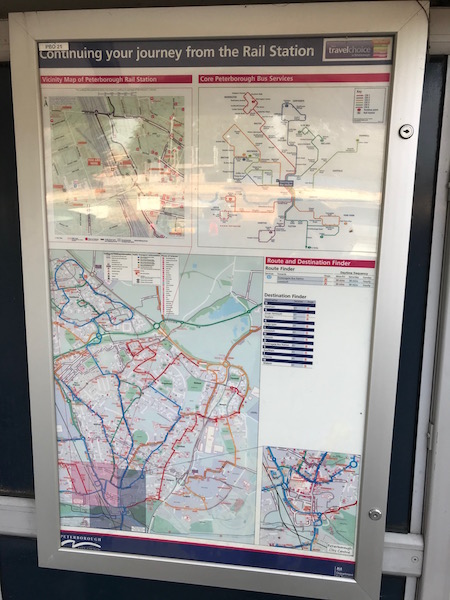 Except the display inside the shelter still needs updating, but that looks as though it might be a complicated affair with multiple stakeholders involved. 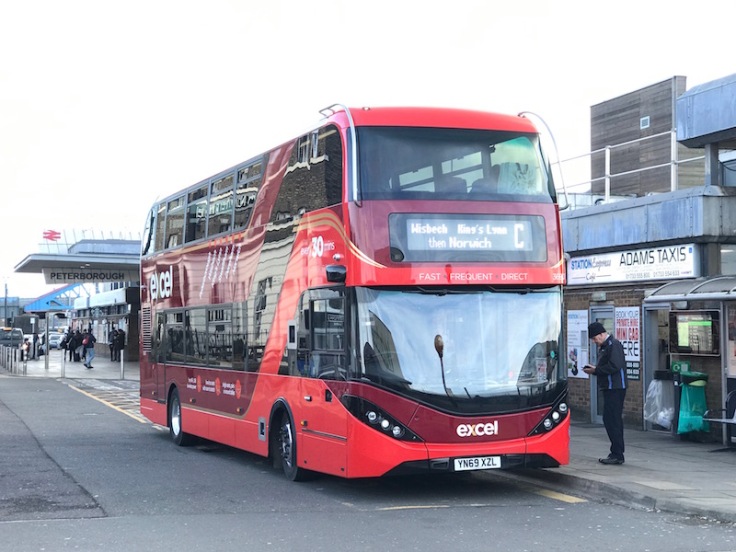 Congratulations to everyone who’s worked hard to get these fine vehicles out on the road today. I understand it’s been quite a long project, but the results are certainly worth it.

It was a shame there weren’t plentiful supplies of the new timetable leaflet available with its colourful maps, times and ticket deals. There were none on the buses and none on display in either Norwich or Kings Lynn. I overheard a lot of people asking for a copy so hopefully supplies will soon be widely available. I managed to secure a copy by knowing the right person to ask!

It’s an excelLENT leaflet for an EXCELlent upgrade and brand refresh. Top marks all round.