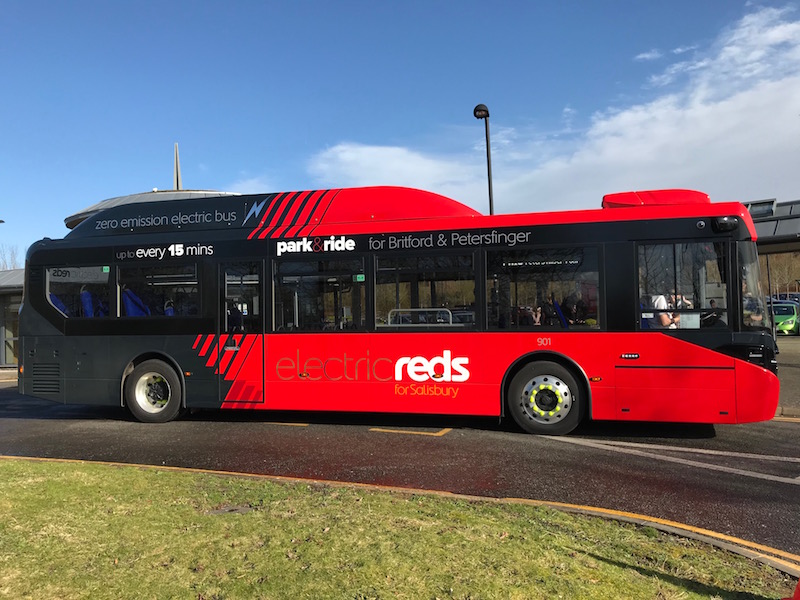 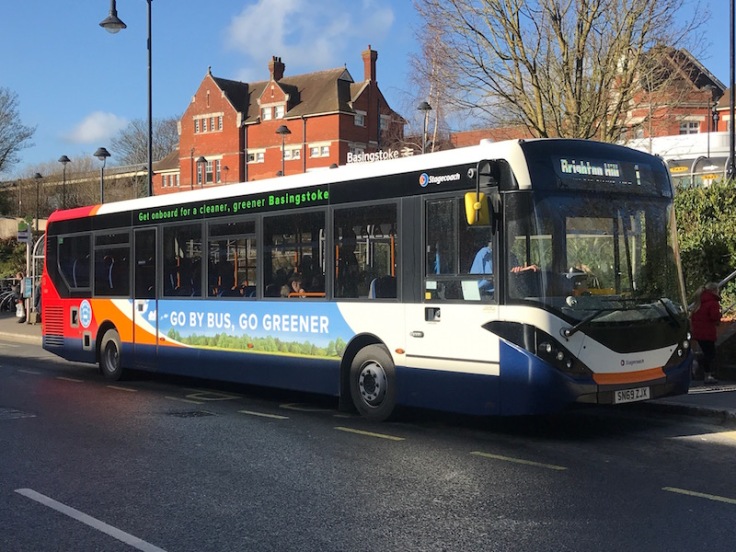 It seems not a week goes by at the moment without new ‘state-of-the-art’ vehicles being introduced to bus fleets around the Country; usually promoted with understandable emphasis on their green credentials at a time of increasing climate change concerns.

None more so than in Basingstoke where Stagecoach South introduced a fleet of 32 new ADL Enviro200 buses for the town network a couple of months ago. That’s a very impressive investment of £5.3million for a town of around 90,000 population.

I took a look yesterday to see how they’re settling in and was immediately struck by the plethora of green messages both all round the outside …. 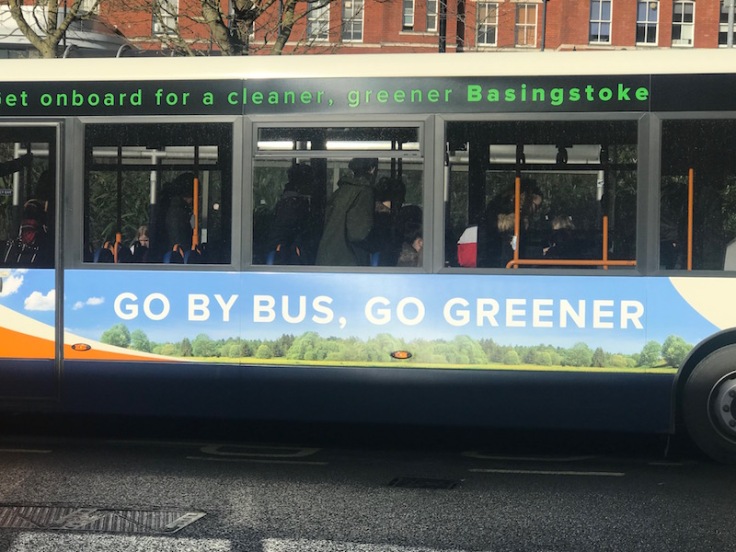 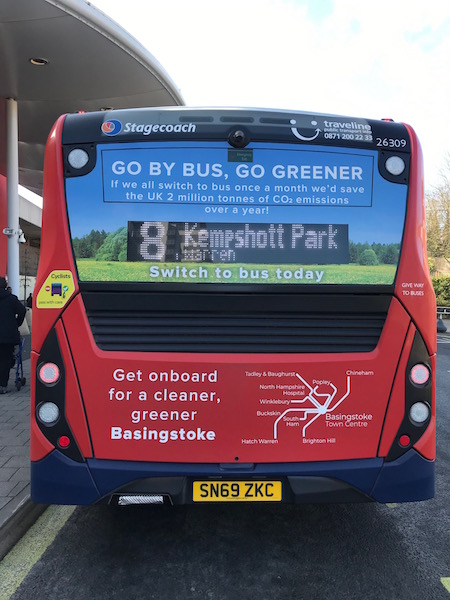 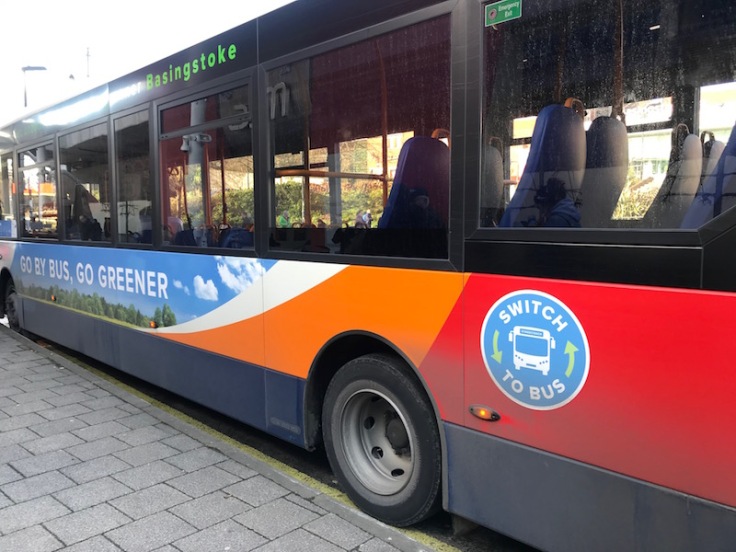 …. and prominently on the cove panels inside too. 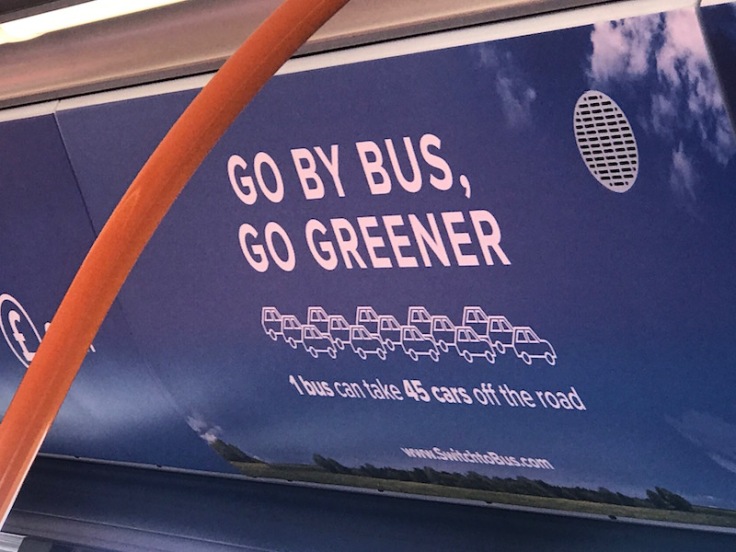 Talking up green issues is no bad thing but it needs careful handling lest the message is overdone. I’ve never quite bought into the slogan about one bus taking X cars (usually equal to the bus seating capacity) off the road as it depends if all the cars have single occupancy and the drivers are all going from an origin to a destination on line of the bus route at a particular time. It also assumes buses are travelling around empty rather than already carrying non car owning passengers. 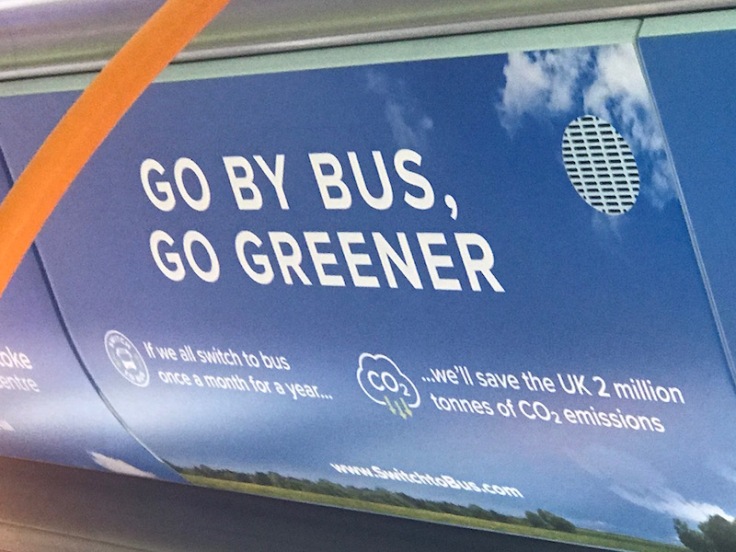 Even more puzzling are claims about so many hundreds, thousands or even millions of tonnes of CO2 being saved if I make twelve journeys by bus in a year. I’m just not sure that resonates with the average passenger as a relevant statistic; it doesn’t with me. The figures just sound too remote from my day to day experiences of life. 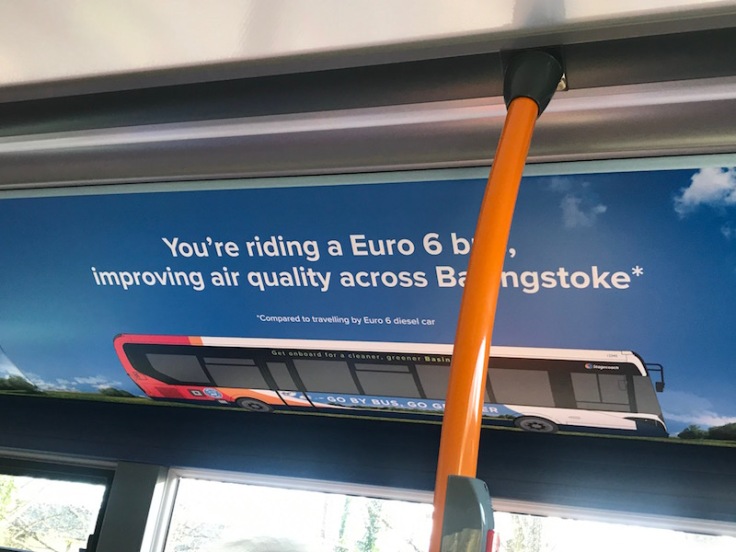 The website tagged on the above panels (www.switchtobus.com) takes you to a section of the Stagecoach Bus website where, as well as the aforementioned tips, there’s advice about hanging washing out instead of using the tumble dryer or using the dishwasher more efficiently – are they for real? What marketing mind thinks the average Stagecoach passenger uses tumble dryers and dishwashers let alone is studiously working out how to reduce the 6.5tonnes of carbon they apparently generate each year.

Rant over, and back in the real world I should add it’s excellent to see Stagecoach invest in such high profile new fleet introductions, especially when virtually a whole town’s network is upgraded in one hit – it’s very impressive. Personally I’d tone down some of the green stuff, topical though it is, and put greater emphasis on simple practical selling points such as the attractive frequencies across the town network and the simple value-for-money pricing together with the downside of car use – parking hassle and costs and other overhead costs of car ownership, albeit I accept Basingstoke was sadly a town built around the car.

However such promotional lines are highly pertinent here where the introduction of this new fleet has coincided with a revamp of the town’s bus timetables including many improvements to frequencies as well as journeys running much later into the evenings (up to midnight), and enhanced frequencies on Thursday, Friday and Saturday evenings. 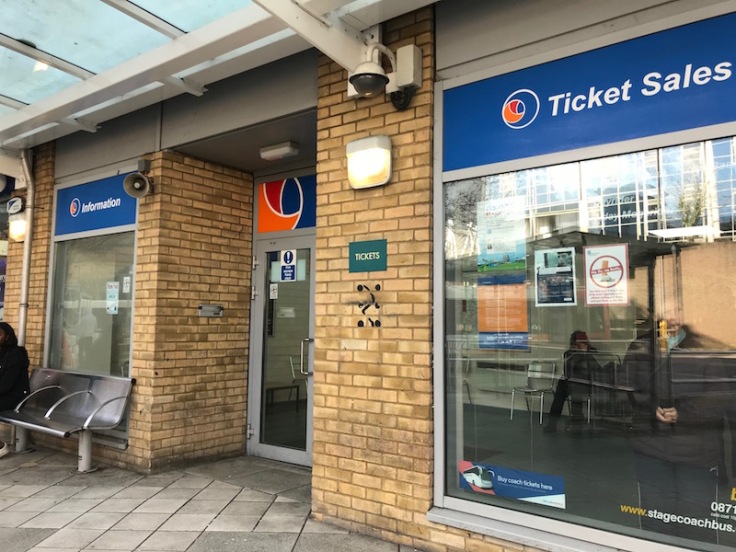 In that regard I was delighted to see Stagecoach South has performed a U-turn on its stance of doing away with printed timetables for Basingstoke (in the name of environmental concerns) and the town’s Travel Shop in the bus station displayed an impressive collection of literature including easy to use booklets with colour maps and timetables for Basingstoke’s routes produced by Stagecoach South as well as the fantastic Hampshire County Council countywide bus map and their excellent timetable books for two adjacent areas. 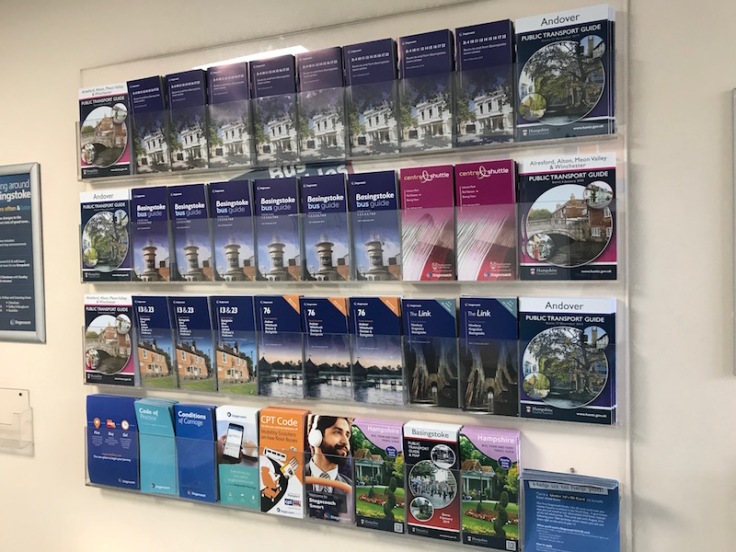 There was also an HCC produced Basingstoke Bus Guide but that needs binning as it’s dated January 2019 and contains out of date information, including promoting changes to the town network introduced that month but have just been reversed in these latest changes (re services 8 and 9). 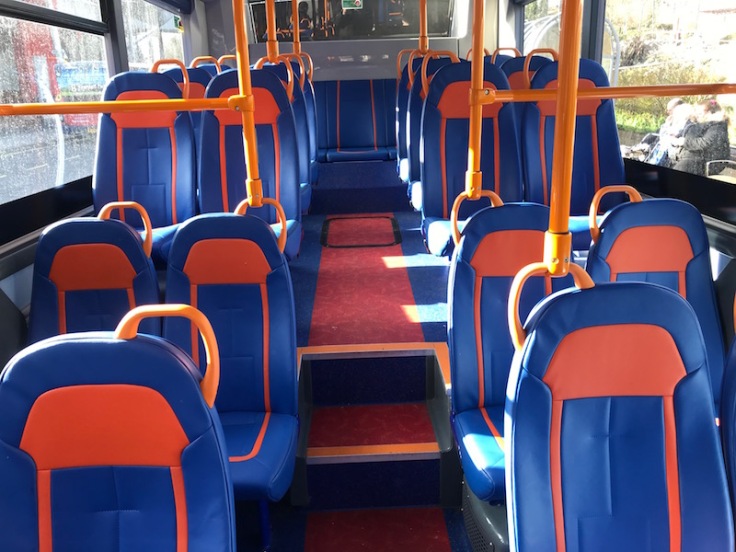 The new buses drive along nicely and give a smooth ride. I’m not a great fan of Stagecoach’s standard blue and orange interior colour scheme but won’t carp about that. The seats are comfortable and the leg room is adequate; that’s more important than colour. These are what I’d call Tesco buses as opposed to Waitrose buses I saw recently in Blackburn which come with all the bells and whistles. These buses have usb and Wi-fi and that’s about it. 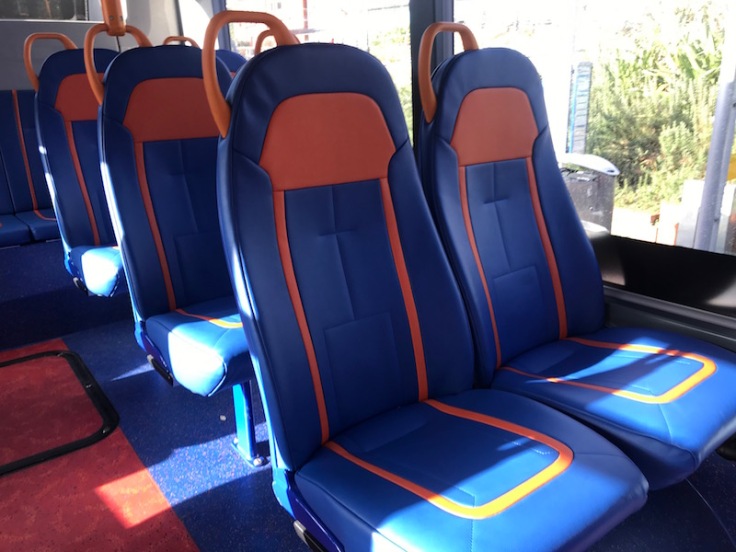 There’s a display which I understand is supposed to show next stops but on my journeys yesterday was either blank or giving a time and date display; handy but not as helpful as next stop. 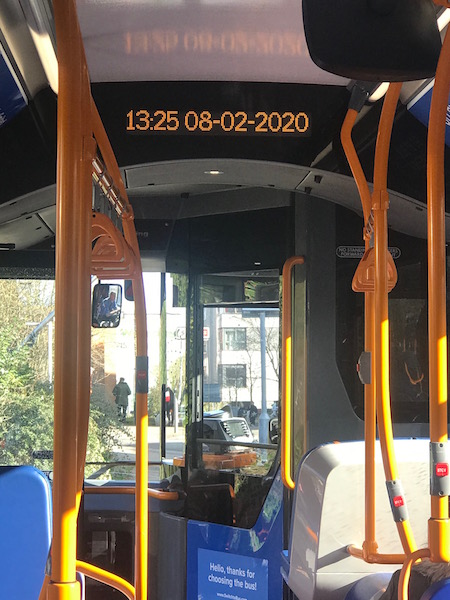 The buses were generally clean (subject to inevitable road dirt on the exteriors at this time of year) and smart but there’s something not quite right with the bus wash detergent ratio at Basingstoke garage as all the windows needed a good rinse. 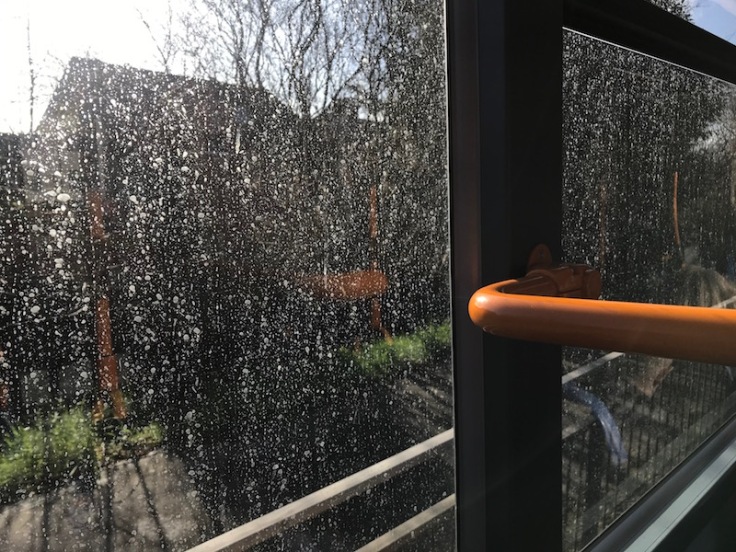 I liked the previous arrangement for Basingstoke’s individual route branded buses linked to the colour coded network map but can imagine this caused inflexible restrictions on inter-working between routes in the schedules and garage allocation issues. I noticed one or two of these buses were still in service …. 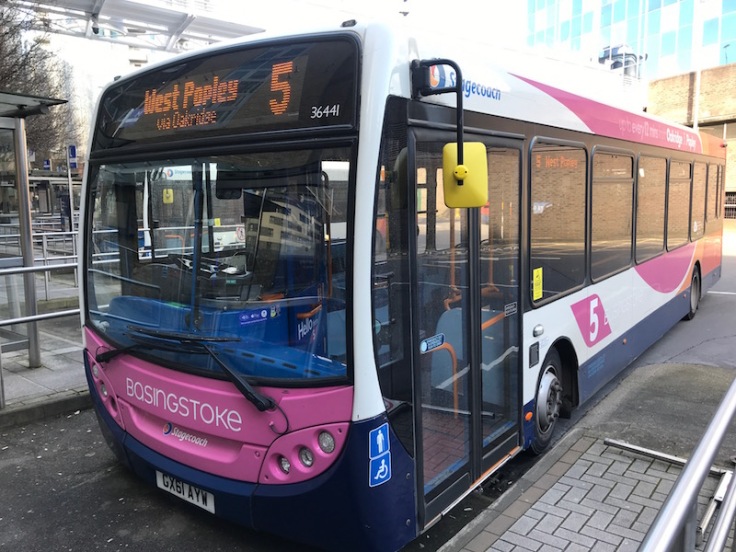 …. together with some evidence of the aforementioned challenges. 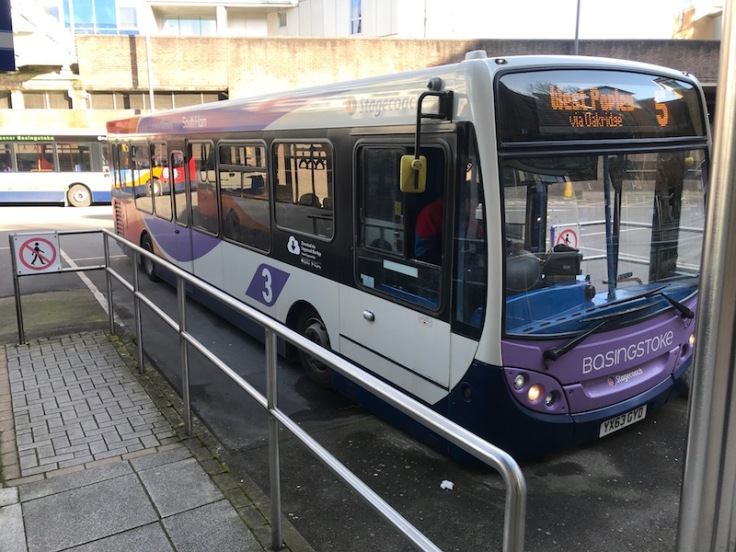 In that regard I can imagine these new buses have been much welcomed by Stagecoach South engineering, supervisory and driving staff in Basingstoke expecially representing around half the garage allocation and it was evident riding around yesterday passengers like them too; loadings were encouraging for a Saturday afternoon. 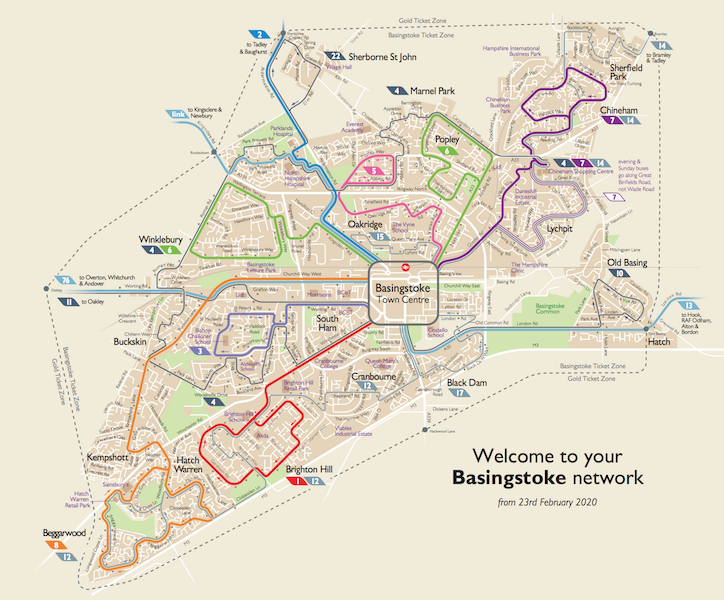 Let’s hope more passengers are attracted to travel as they find out about the enhancements to what is a tidy and effective town network …. and those green credentials too, of course. 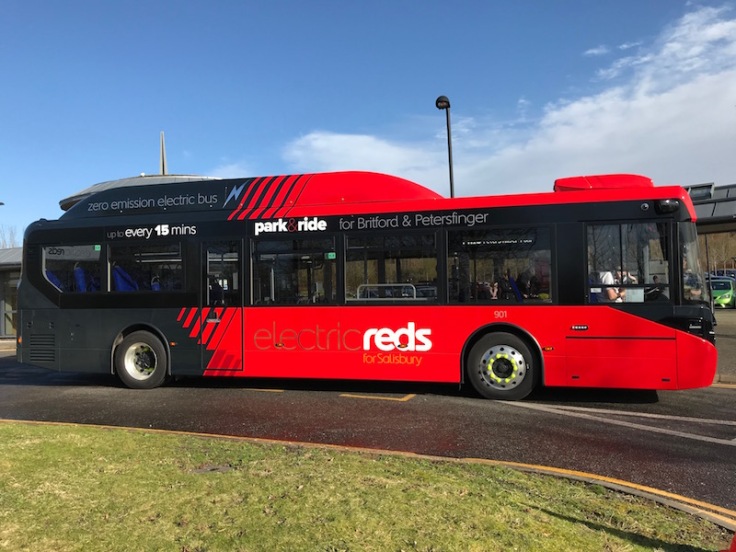 Further west, over in Salisbury Go South Coast got the bunting out last week to launch three electric BYD ADL Enviro200EV buses they’ve bought with £600,000 help from the DfT’s Low Emission Bus fund. At £345,000 each, without such help, a commercial bus company couldn’t possibly justify such massive expenditure as well as the considerable costs of installing charging infrastructure at the garage.

The three electrics are being used on two of Salisbury’s Park & Ride routes which double up as city routes. They’re not high mileage and the terrain could not be considered particularly arduous which will all help battery performance. The conditions are pretty much ideal for the current limitations of electric buses. These vehicles have a range of around 150 miles which works for short Salisbury city routes but wouldn’t work for the many longer distance inter-urban routes run by Go South Coast or the more arduous cross town routes in Bournemouth and Poole. 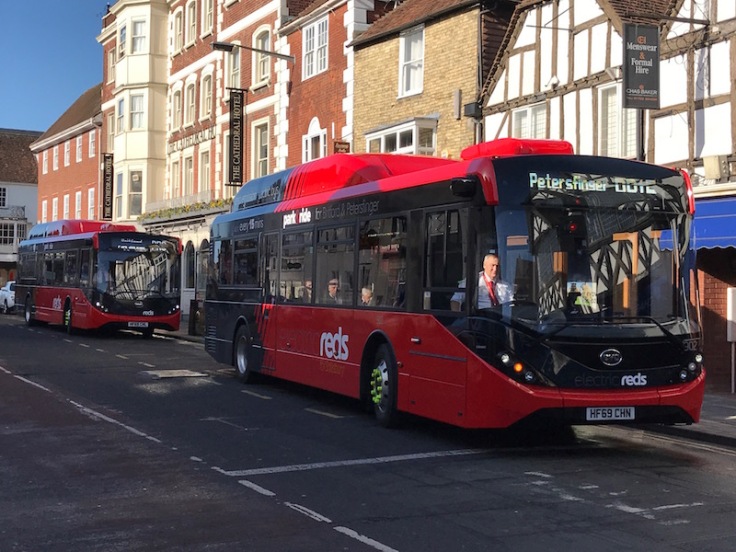 I caught one of the new buses operating on route PR15 yesterday which is a short route between the city centre and a car park to the east of the city at a place known as Petersfinger on the A36 towards Southampton – it takes less than ten minutes for the end to end journey and indeed would be even shorter if Salisbury’s notorious Saturday shopping traffic queues weren’t so severe. A few bus lanes wouldn’t go amiss on the approaches to the city, although I appreciate road space is at a premium. 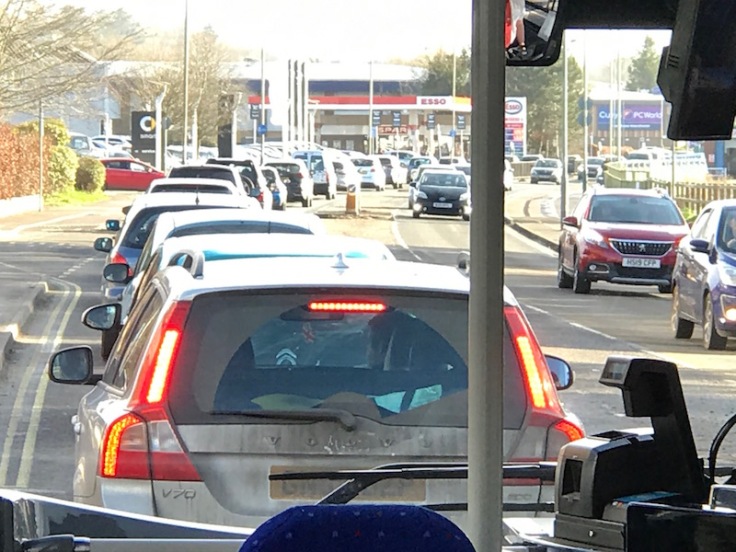 Bearing in mind the huge capital cost, not surprisingly the funding hasn’t stretched to kitting out the interiors with many luxury ‘Waitrose style’ Blackburn add ons; it’s quite a basic interior although there are next stop displays and announcements and the seats are perfectly comfortable and the flooring’s nice. They’re extremely well presented with bright cove panels. Highly appropriate for a maximum journey length if ten minutes or less. 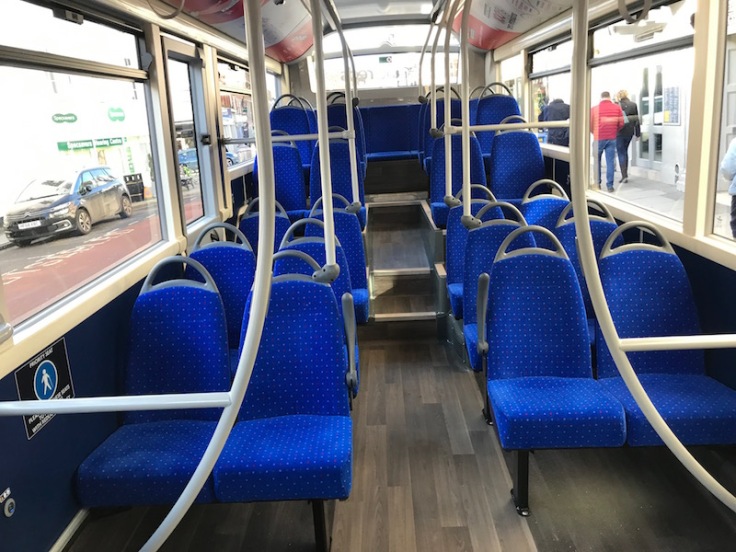 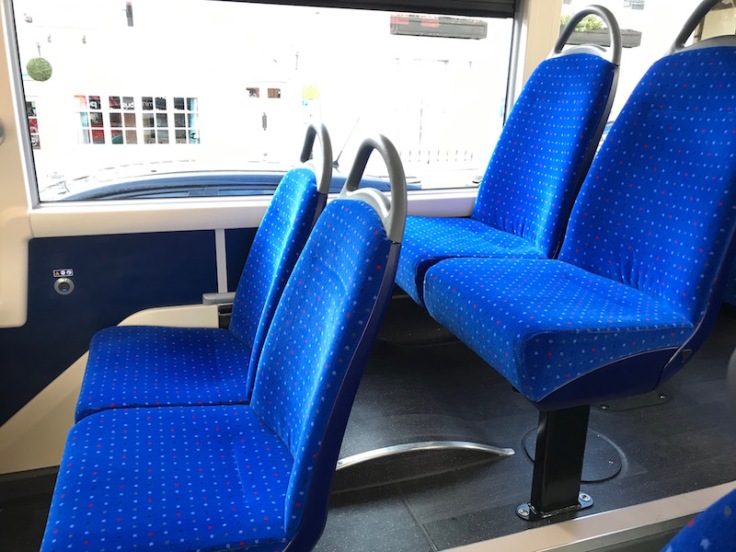 Go South Coast managing director Andrew Wickham welcoming this investment in electric propulsion has rightly been keen to stress one of the real issues in achieving carbon reduction is land use planning and getting developments built in the right place, ie consistent with high quality transport corridors. Hence the need for a ‘bus strategy’. 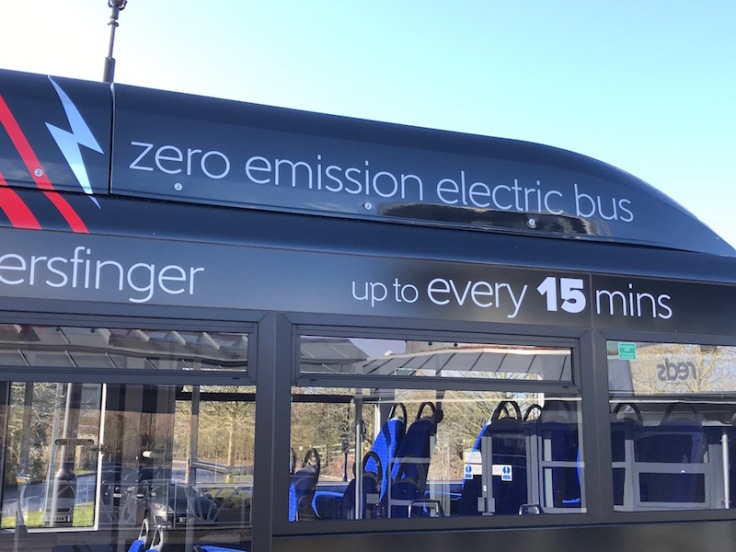 He admits the introduction of three electric buses in Salisbury is “not going to change the world, but it is a starting point – and a statement”. Andrew’s right about that too; I overheard passengers on the journeys I travelled on yesterday commenting on the bus being electric – these things are noticed and it all helps to raise the profile of buses. 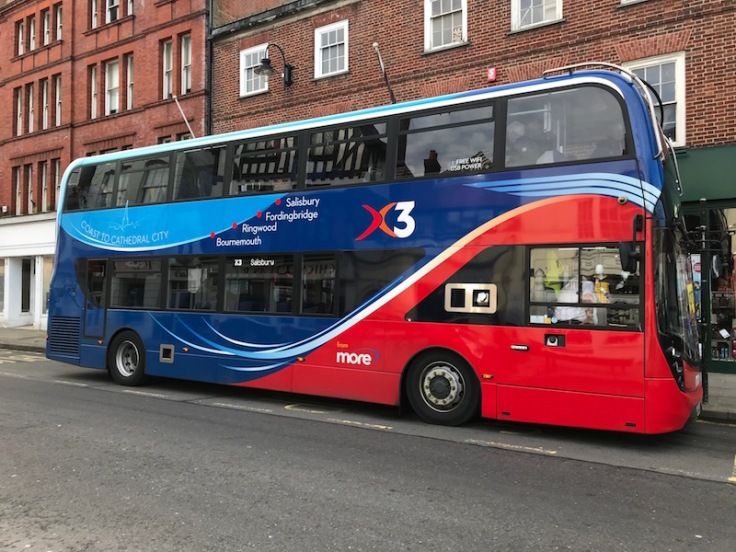 As do attractive liveries (topical subject on this blog at the moment) and I was very impressed with the way these new electric buses have been dressed as well as the new brighter red now being used on the latest ‘Salisbury reds’ branding on RED 1. 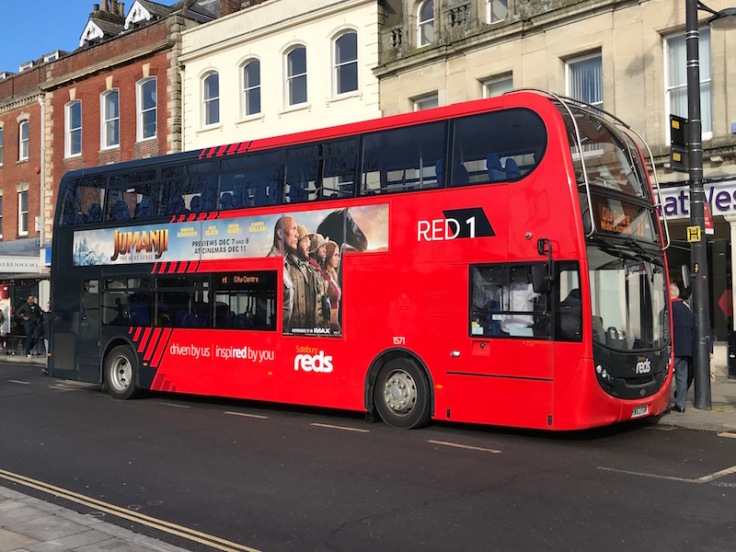 The city’s street scene is definitely enhanced with bright attractive liveries and you really get the feeling buses are making a positive presence in the city. 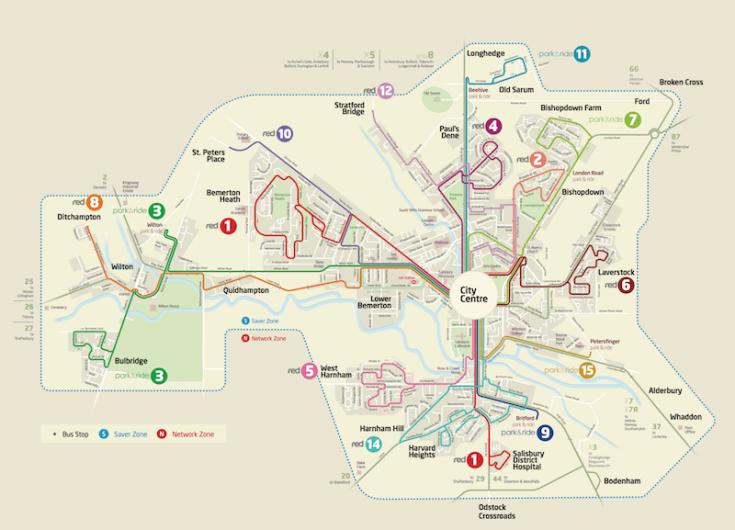 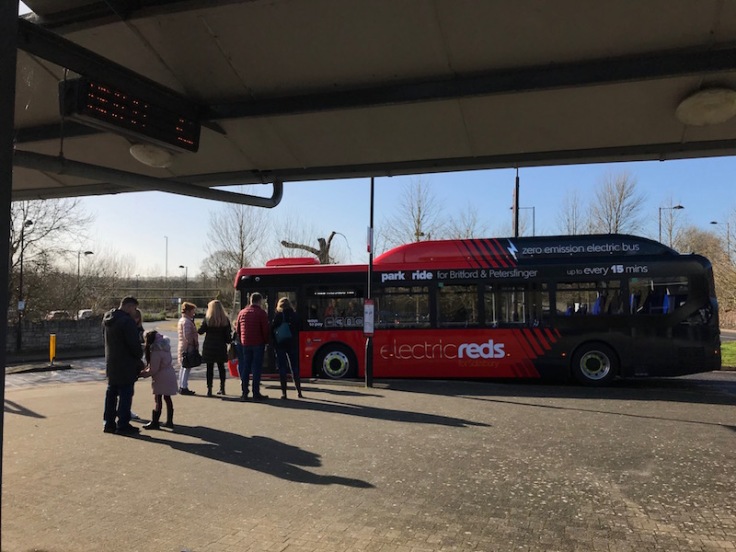 …but once we were all on board the journey silently glided us back into the city centre. Impressive and inspiring. 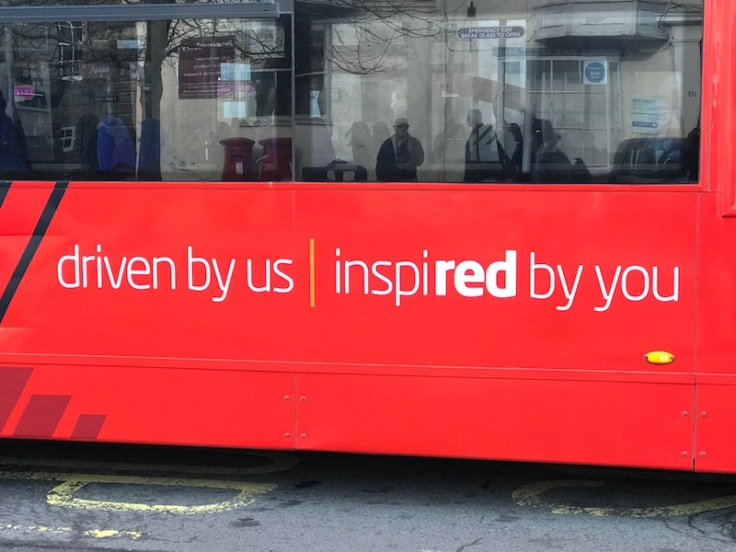