The competitive battle between National Express Coventry and Stagecoach Midlands notched up another gear yesterday with the former extending alternate journeys on their ten minute frequency route 20 running between Coventry and Bedworth every 20 minutes on to Nuneaton as a direct challenge to Stagecoach Midlands’ long established, and long in mileage, trunk route 48 which runs every 10 minutes between Coventry, Bedworth and Nuneaton with alternate journeys continuing to either Leicester or Atherstone. 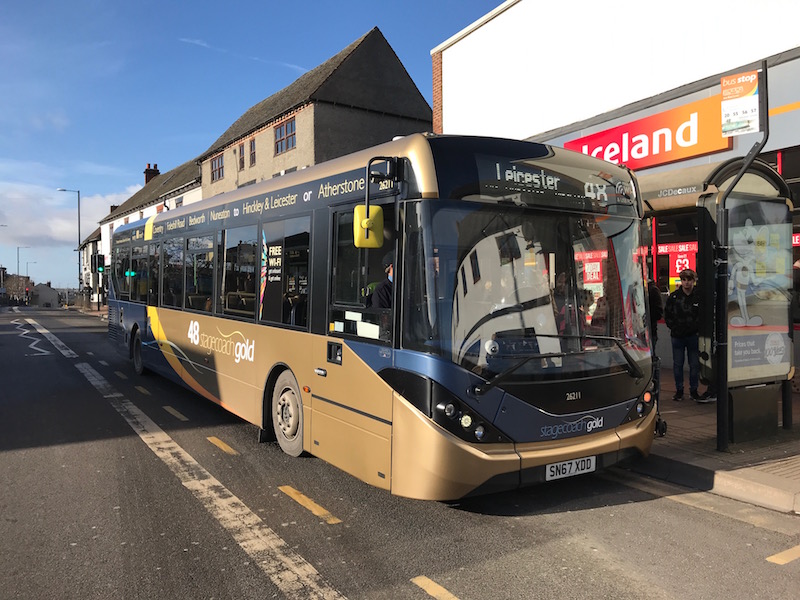 This latest move in the tit-for-tat spat between the two operators follows Stagecoach Midlands’ introducing new route U12 running direct between Coventry and the University of Warwick earlier this month in competition to National Express Coventry’s route 12X (which I blogged about on 6th January) and which in turn followed National Express Coventry doubling the frequency of their route 11 between Leamington Spa and the University of Warwick to four-buses-per-hour last September making it a bigger competitive threat to Stagecoach Midlands’ much longer established eight-buses-per-hour routes U1 and U2.

Here’s what last week’s southbound timetable on National Express Coventry’s route 20 looked like, including some offshoots to three suburbs in north east Coventry (20A, 20B, 20C), including the hospital:

And here’s what this week’s timetable looks like (the 20A, 20B and 20C continue unchanged although are no longer shown in this timetable):

Here’s a map to show where Nuneaton is in relation to Bedworth and Coventry:

And here’s what Stagecoach Midlands are defending on their route 48 timetable:

And here’s a map showing the extensive nature of Stagecoach Midlands’ network around Nuneaton which National Express Coventry are expanding into:

National Express Coventry have added three buses to route 20’s schedule for this extension and although they’re the minority operator north of Bedworth with one journey to every two from Stagecoach Midlands running direct (other Stagecoach routes [55 and 56] meander a bit) it’s likely it’ll be pricing which will really make the competitive difference.

Unless Stagecoach Midlands reviews its pricing policy, their £5.40 single between Nuneaton and Coventry compares very unfavourably with National Express Coventry’s standard flat rate of £2.20 for any single journey and an all day cap of just £4. That’s less than half the Stagecoach Midlands’ Nuneaton Dayrider Plus which, takes in Coventry, for £8.20.

Savvy commuters are also likely to realise the National Express Coventry weekly travelcard at £13.50 or four weekly for £48.96 are significantly cheaper than Stagecoach Midlands’ weekly at £23.50 or 4 weekly at £89. I reckon some judicious Stagecoach fares reductions may have to be on the cards before too long, as those savings probably make it well worthwhile for price conscious passengers to forgo a 10 minute frequency for a 20 minute one. 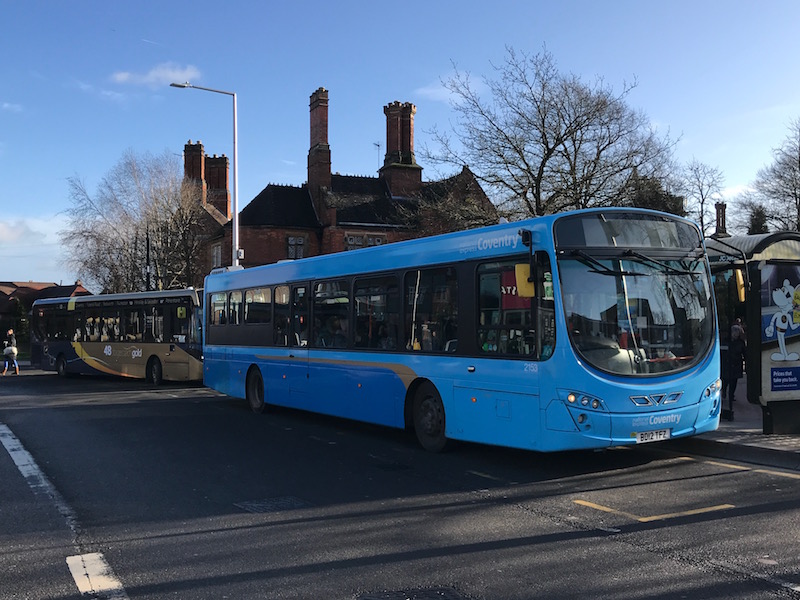 I took a trip out to Nuneaton this morning and rode down to Bedworth a couple of times to see how things are shaping up, although of course it’s only Day 2 for the NatEx interloper.

Loadings mid morning were rarely into double figures. The busiest bus I travelled on was a late running northbound Stagecoach 48 to Leicester which had a very decent load heading out of Bedworth. 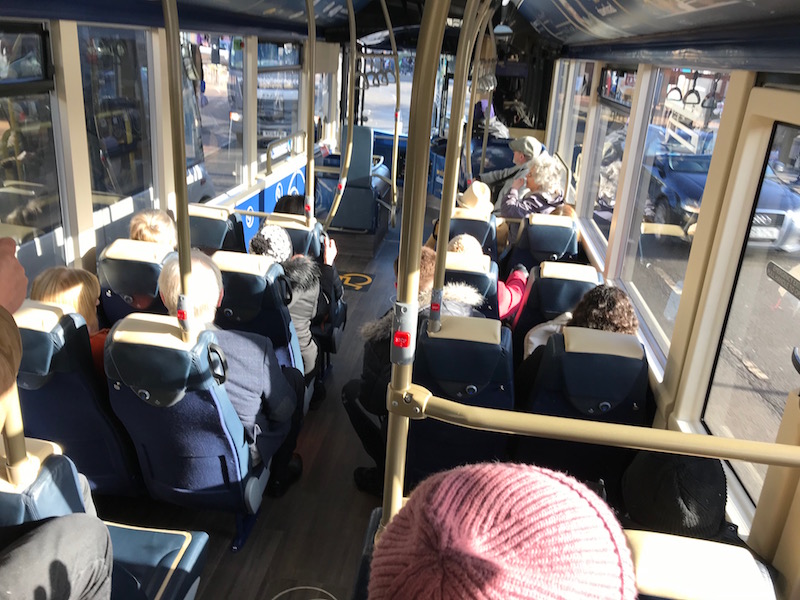 Otherwise between six and a dozen passengers per journey was average.

In Nuneaton bus station NatEx have been allocated a departure stand in a different aisle, C, to Stagecoach’s Coventry bound buses in aisle B (and it’s not easy to nip from one aisle to the other with their long continuous shelters) but it was evident some passengers were aware of the newly extended 20 and made a conscious move to find its departure stop.

Interestingly the conversation on the earlier bus while waiting to depart was all about the new competition and while it was welcomed by one lady because of the fare savings she could now make ”now the Corporation are running here” but she was concerned if it undermined route 48 ”as I’ve got family who work for Midland Red”. I felt I was in a time warp.

NatEx had a high-viz wearing ambassador by their stand telling everyone about the price deals and when he saw I had a Concessionary Pass wanted me to know if I travelled before 09:30 I would only pay a flat £1 to ride.

The NatEx vehicles were promoting the extended service on the sides of those buses which are branded for the 20 which I see also promote an ‘up to every 5 mins’ frequency although this only applies south of Longford where those 20A/B/C journeys appear (see the small print) so is not relevant to the Nuneaton market. 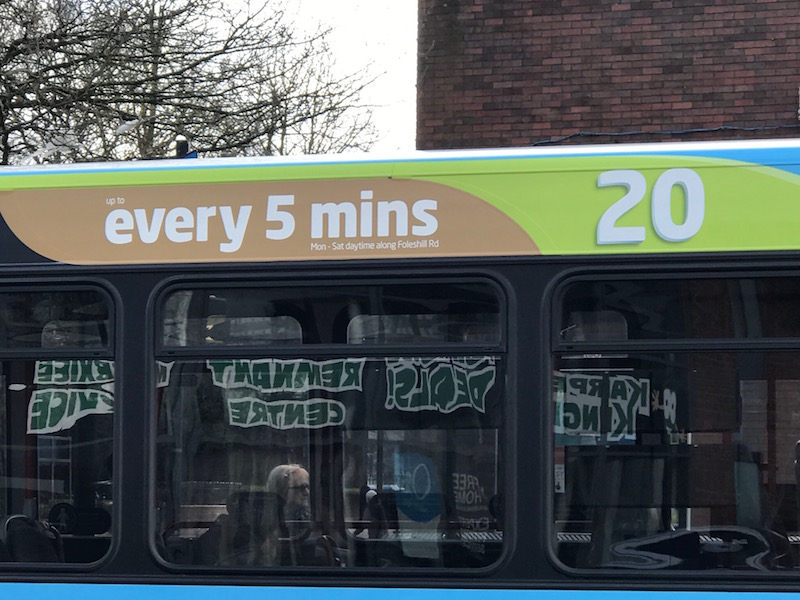 They also had a supply of new timetable leaflets in among the Metro newspapers for passengers to pick up.

Stagecoach have the benefit of a Travel Shop in the bus station where all their timetables are on display including the Gold branded 48. 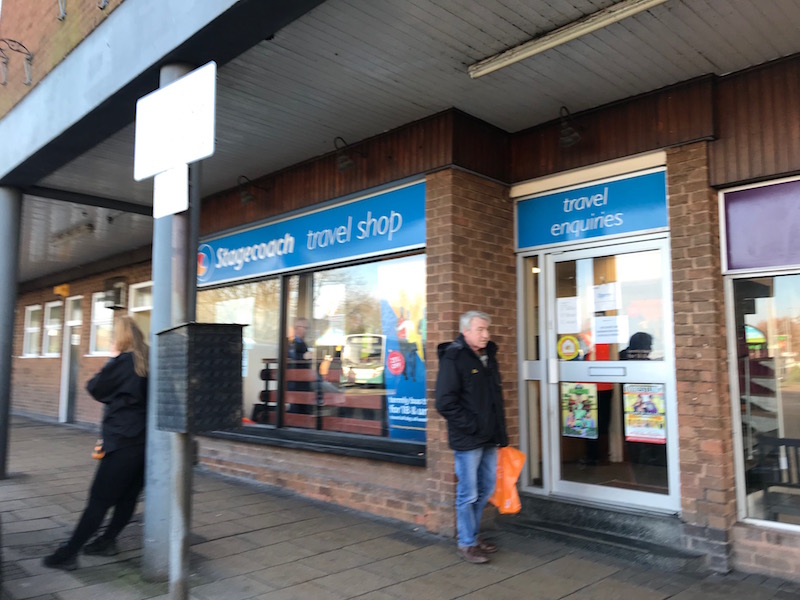 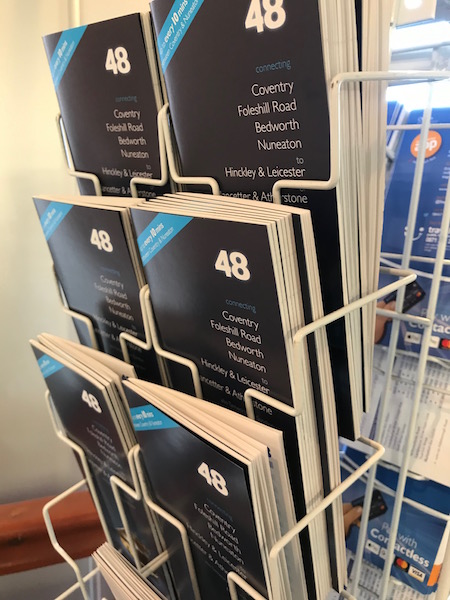 The shop is a bit overrun with drivers waiting their bus to take over and it’s made clear on the door it’s all only about Stagecoach – I understand this follows disappointment at not having information about Arriva’s bus routes into the town rather than anything about the new National Express competition.

Indeed to be fair to Stagecoach they had organised the display at the departure stand showing NatEx route 20’s times.

Stagecoach upgraded route 48 to Gold branding a couple of years ago along with an intake of smart new single deck buses. These have the standard Gold branded quasi-type-leather high back seats which offer a degree of comfort but the legroom is a bit tight in some of the seats.

They do have usb sockets, a coat hook and a light though and I’m assuming Wi-fi but these days I never bother trying it, always finding it a faff to join and slower than 4G.

Nuneaton didn’t strike me as a major destination and I guess there’s a southbound bias to the passenger flow to Coventry on the 20 and 48. Stagecoach have the advantage of capturing the market north of Nuneaton wanting to travel south and across Nuneaton; whereas National Express start off with an empty bus from Nuneaton but that gives them the advantage of better reliability with a generous running and stand time provision for the three buses extending north of Bedworth. They also have those crazy low fares.

But I reckon Stagecoach are potentially causing more disruption to NatEx on the Coventry to University of Warwick market than is being disrupted the other way round. Fares are the issue on the Nuneaton spat but Stagecoach have undercut NatEx on the 12X/U12 uni battle which is the bigger market.

Where will it all end?

Chris Gibbens, Commercial Director of National Express Bus cheekily commented “we know our customers want reliable, frequent and direct bus travel to and from Nuneaton so we’re delighted to be able to provide a new great-value link between Coventry, Bedworth and Nuneaton”. It’s as though Chris hasn’t noticed there already was a reliable, (even more) frequent (than NatEx are providing) and direct bus to and from Nuneaton. Oh well, let’s see what Stagecoach Midlands know their customers want in the way of reliable, frequent and direct bus travel within Coventry next. There’s plenty to chew on in Coventry too. 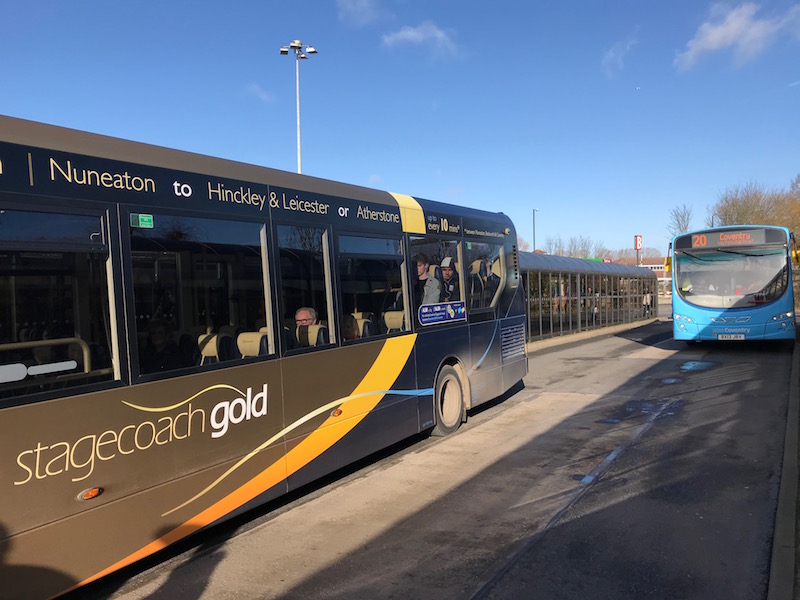 2 thoughts on “Plenty to chew on as … Nuneaton!” Leave a comment ›

BusAndTrainUser – journeys around Britain by bus and train Plenty to chew on as … Nuneaton!
%d bloggers like this: