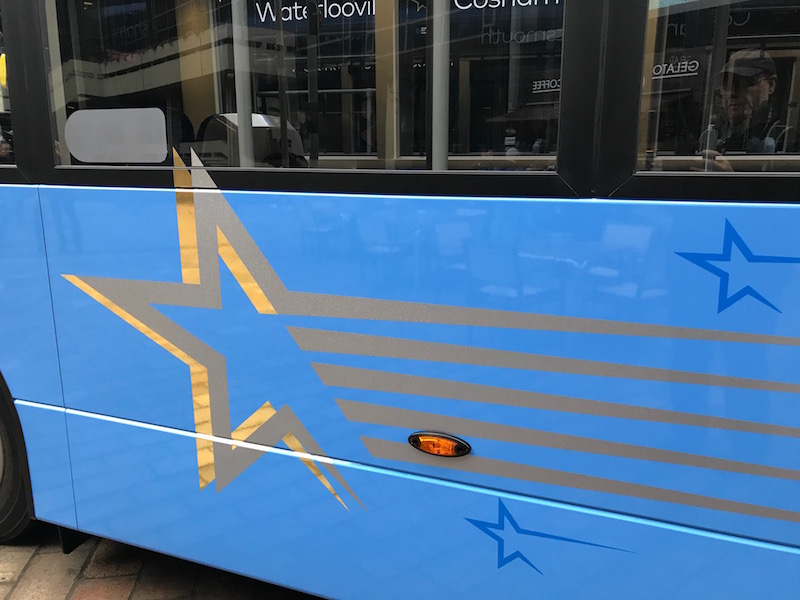 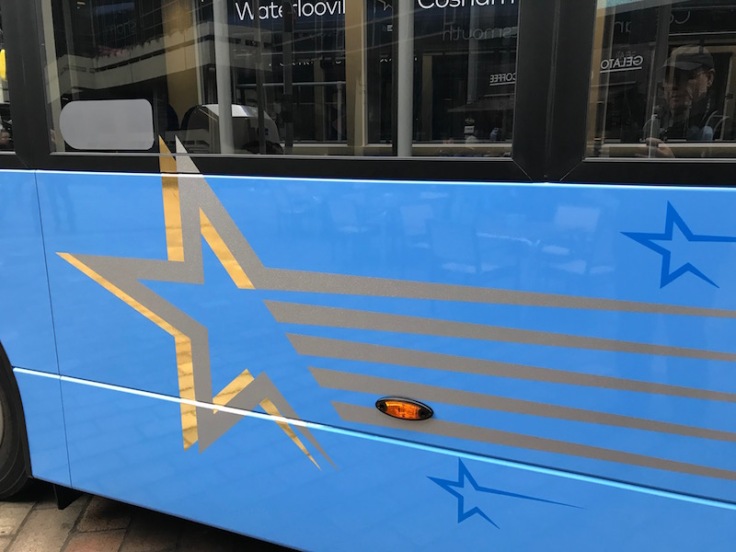 I don’t often attend new bus PR razzmatazz type launches these days, much preferring to take a ride when they’re actually in service earning their keep with passengers travelling on board.

But I made an exception this morning having seen First Portsmouth’s social media promoting their sparkly new buses for the Star being on show for the public to take a look between midday and 3pm and I thought: it’s just along the coast so why not? 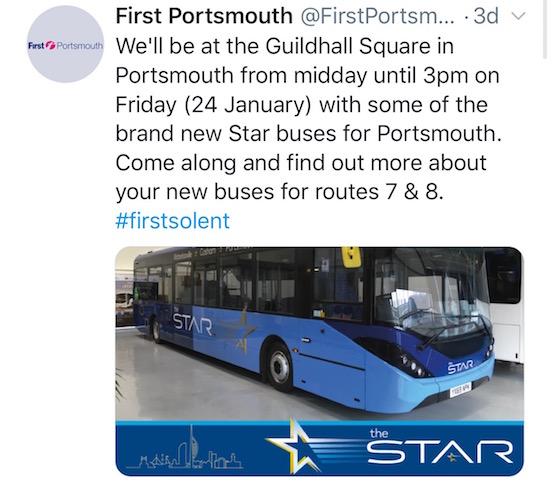 Well placed sources had tipped me off the official launch for stakeholders would begin an hour earlier at 11am so to get my money’s worth I decided to gate crash that party and hear all about this latest investment and see the ribbon ceremonially cut.

There was the usual line up of pristinely clean new buses … 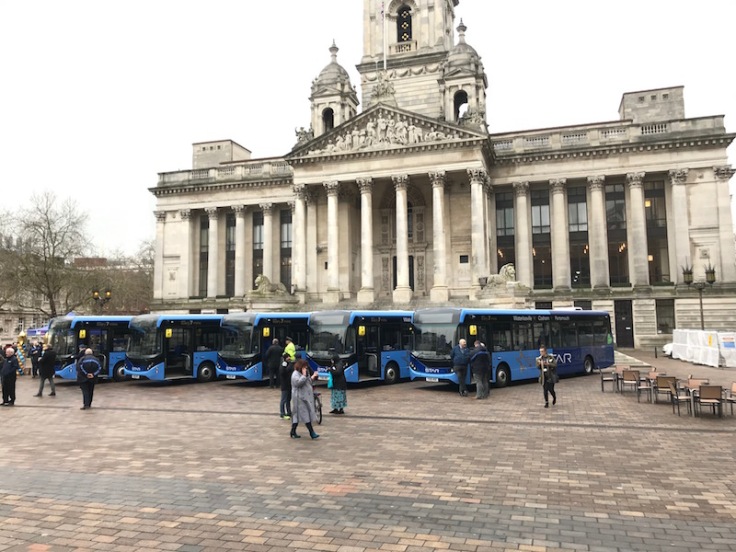 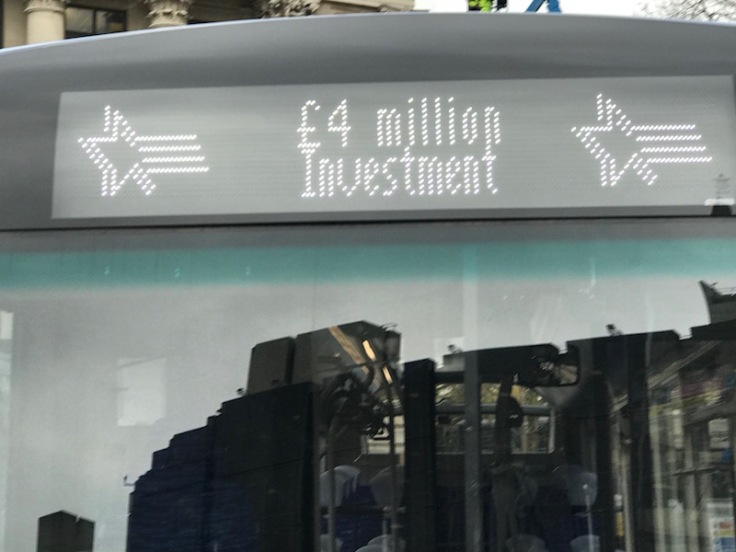 …. a gazebo with on brand colour coordinated balloons …. 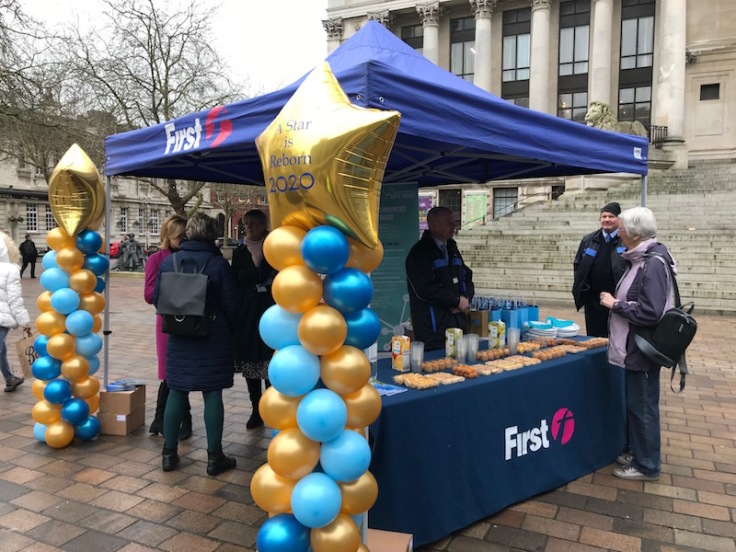 … with nibbles and goody bags, although strictly for stakeholders (mugs, pens and notebooks don’t come cheap for widespread giveaways these days) …

… and a motley collection of stakeholders themselves from bus company, city and county councils, designers and camera wielding media folk.

It was a good turnout and a lot of positivity which is what these events are all about.

Then it was ribbon cutting time… 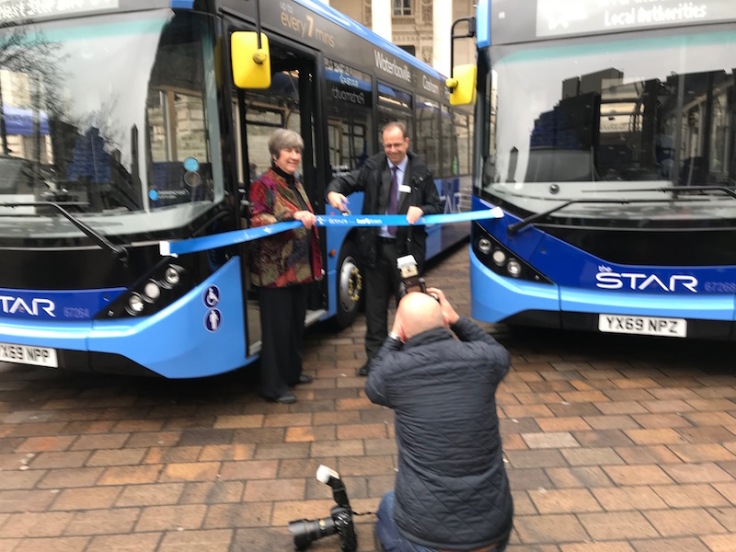 … and a bit more photograph posing … 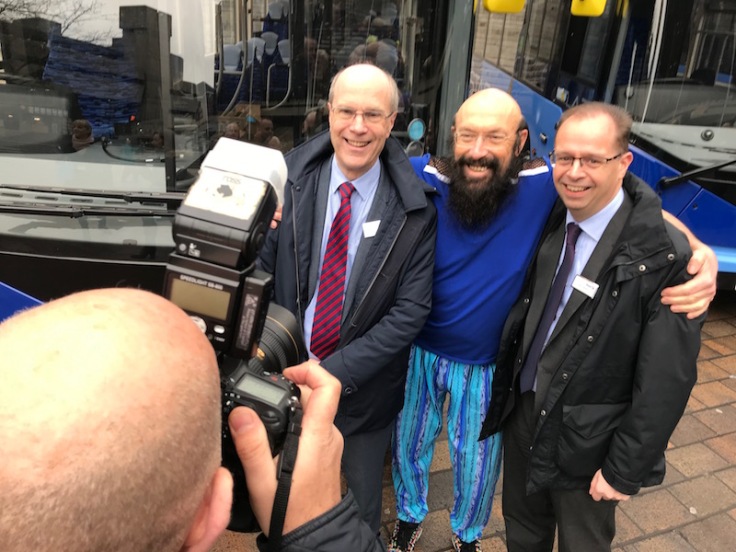 … and time to mingle and chat.

The great thing about these launches is they do put buses centre stage in prominent city locations for a few hours.

Members of the public were wandering by and clearly taking an interest in the line up.

First Portsmouth had a supply of their excellent area timetable books on hand which includes network and route maps and clearly laid out timetables. 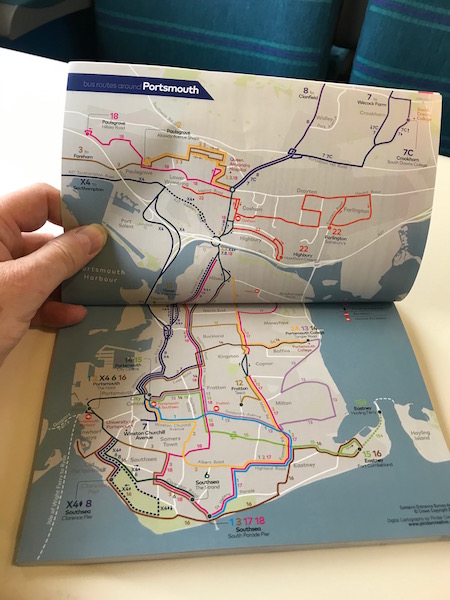 I noticed the buses had dispensers on board but looked of a size to take leaflets rather than books so wonder if the budget will run to a bespoke leaflet to promote the refreshed STAR brand.

I was reminded this is the third iteration of the STAR brand since the first launch in 2008 after the A3 corridor from Waterlooville into Cosham, Hilsea and Portsmouth was transformed into a high profile bus corridor with bus lanes and branded bus stops. It admirably demonstrates the importance of refreshing brands.

Best Impressions have come up trumps with another superb livery incorporating local landmarks and identities. 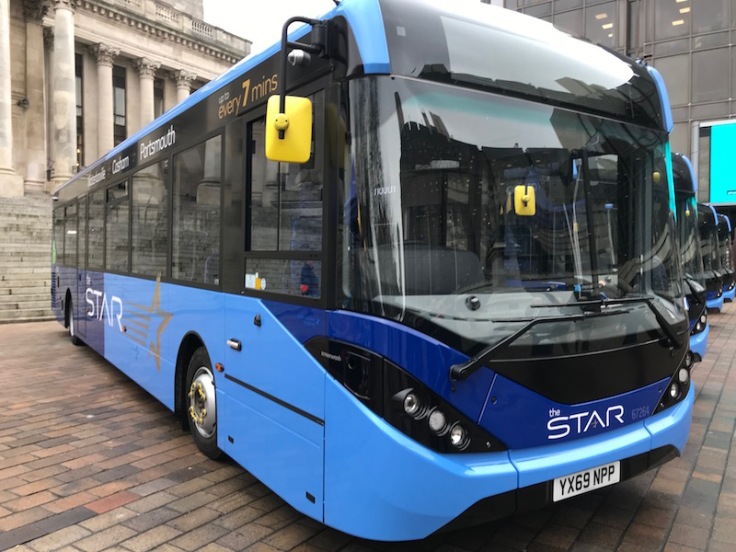 The new two-tone blue colours and logo certainly give the brand an attractive refresh. 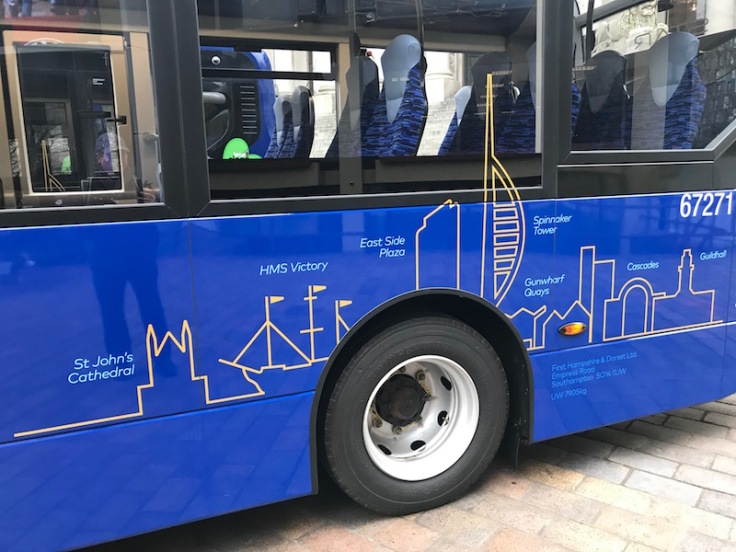 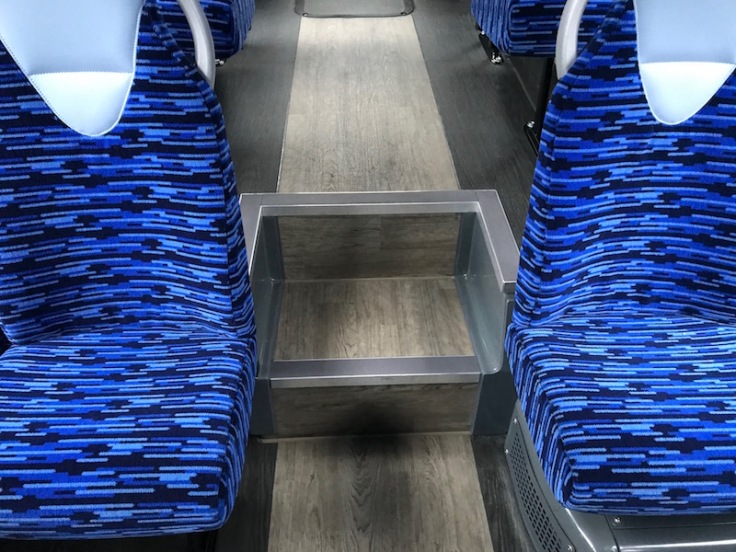 ….no back of seat consoles… 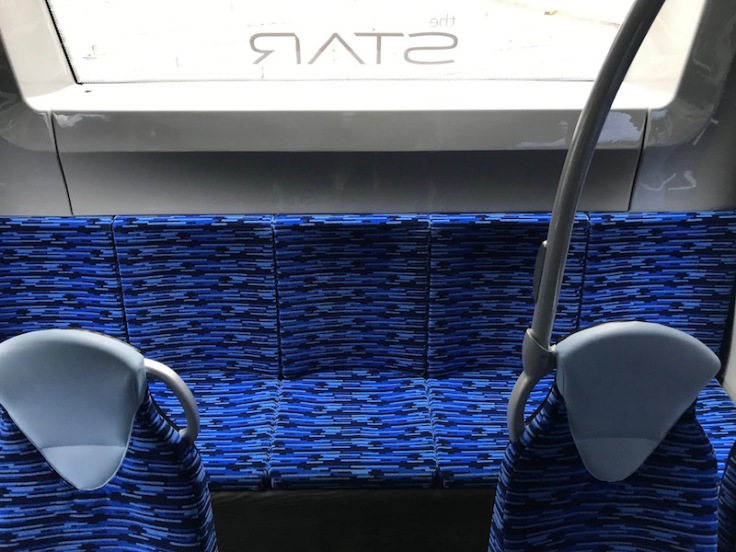 The attractive cove panels include a route map either side … 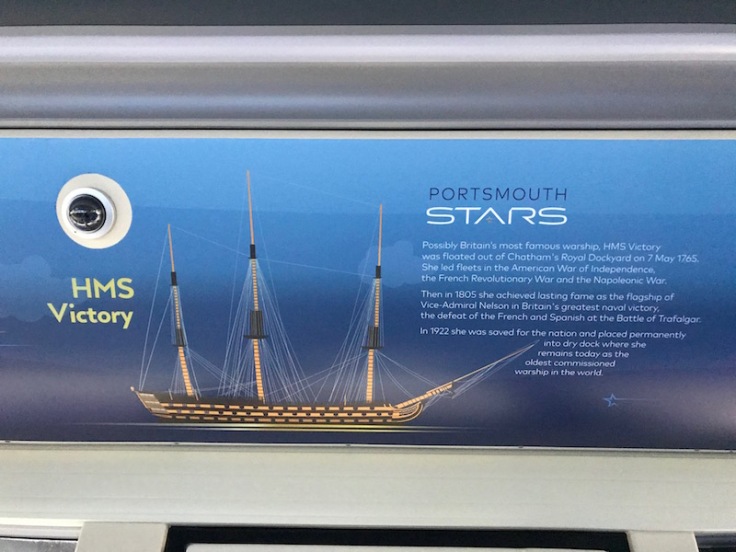 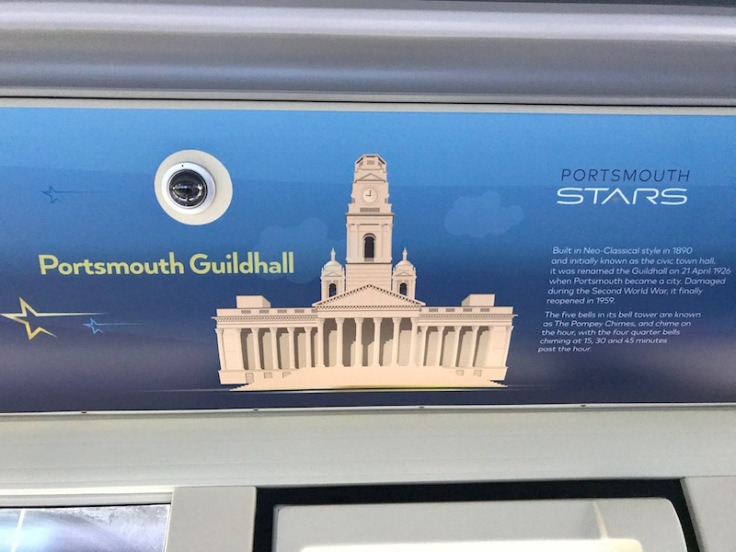 … although I did point out to Best Impressions’ Ray Stenning the descriptions may be a bit verbose for reading at height and at an angle!

There are also bright large next stop signs ….

… and I do like the bright and very attractive moquette – showing how things have changed since the last vehicles for the STAR when beige leather was all in vogue…(I never really liked it)…. 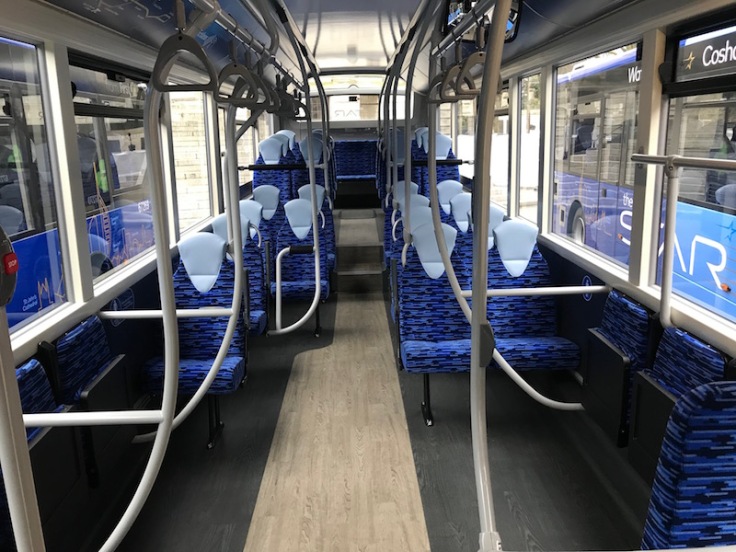 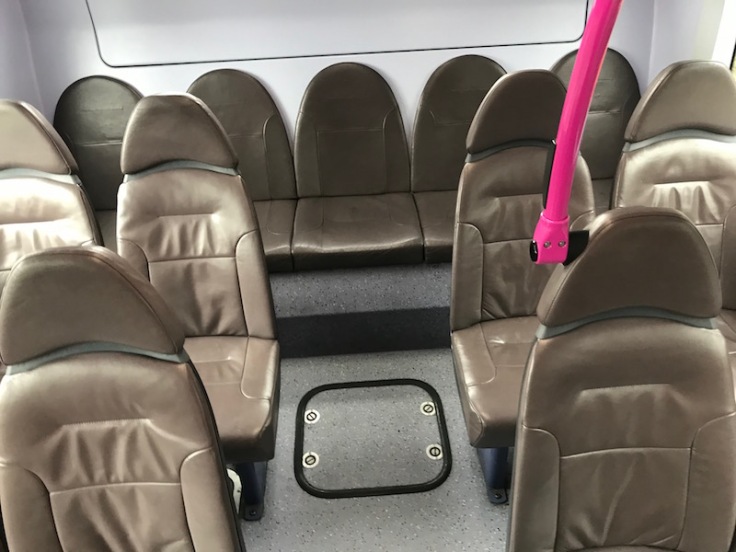 Once the ribbon cutting excitement was dying down I decided to head off and give the STAR a try out before the buses currently used are cascaded over to Southampton (after a repaint into red). 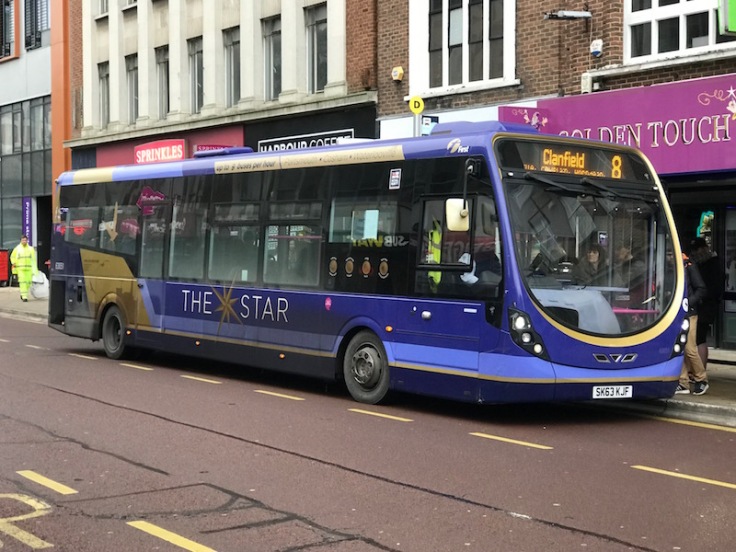 The STAR brand encompasses two separate routes on the Waterlooville to Portsmouth/Southsea corridor.

Route 7 starts at Wecock Farm and takes in Crookorn and North End every 12 minutes while route 8 runs every 15 minutes starting at Clanfield and runs on a more direct route but continues to Southsea whereas the 7 turns round at Winston Churchill Avenue just beyond Portsmouth & Southsea station.

Together they provide 9 buses an hour along this busy corridor. 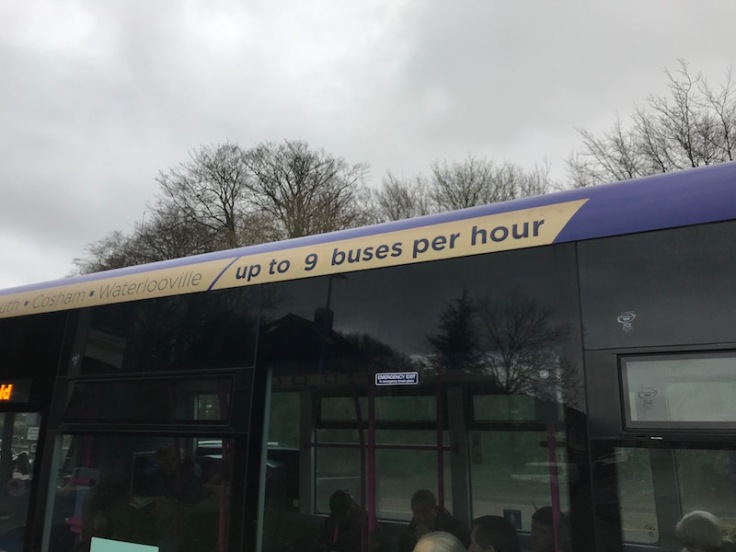 I noticed the brand refresh has subtly changed the marketing message from 9 buses an hour to ‘up to every 7 minutes’ which is mostly true on most of the route. 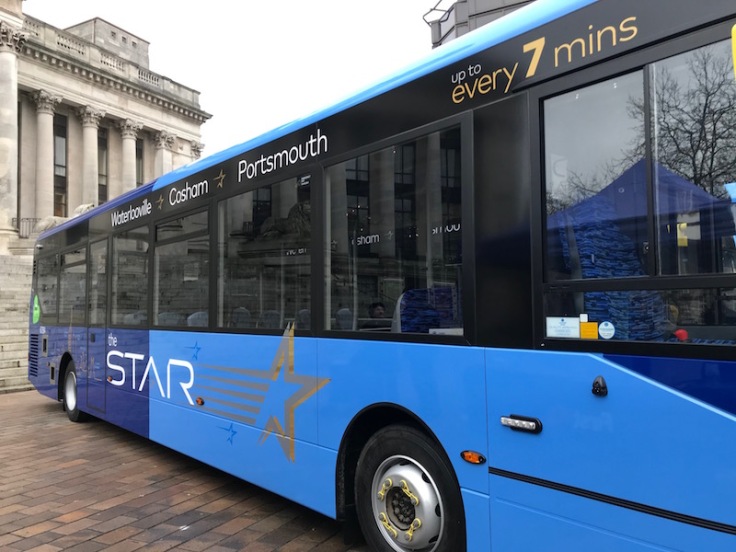 I also noticed the old branding is impressively carried through to bus stop flags and bus shelters along the route which has worked well for the past few years but is now going to be a bit disjointed with the buses now sporting a refreshed and subtly different coloured brand.

I’m thinking it’s unlikely the local authority partners have the funding to refresh the shelters at this time too and they may well think that would be an expense too far. 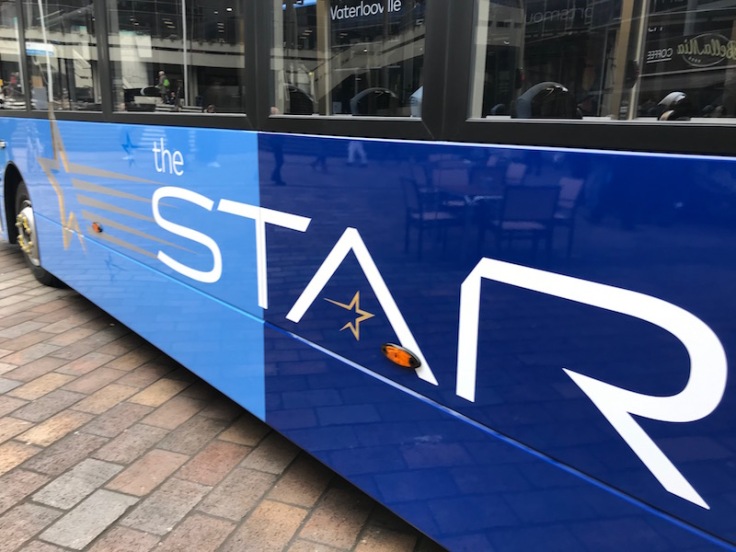 Some might think it’s no big deal but for brands to really work there needs to be consistency so hopefully something can be done some time soon.

In that regard it was interesting to hear the City Council and partners have submitted a substantial bid for the Government’s Transforming Cities Fund – of £322 million. That really would be transformational and I was told could unlock an order for 80 new buses as well as lots of other exciting developments to make buses a realistic option for many more of those 43,000 vehicle drivers coming into the congested and constrained conurbation of Portsmouth and Southsea every day

The bus I caught on route 8 heading north out of the city had an impressive lunch time load (although it was running 10 minutes late) ….

…. and it was equally impressive to see the 6.2km of bus lanes which dominate this corridor …

…. and I’m sure there’s potential for more if that bid is successful.

As highlighted above the shelters along the route are impressive (including real time displays), but as always, some aspects lack TLC… 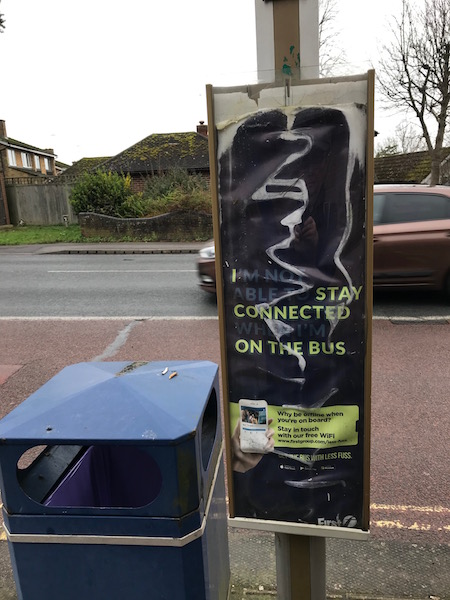 I wish the TCF bid good luck. While Portsmouth is not in the politically coveted North for money showering, it’s unique location on a constrained island with the highest living density per square mile and the mass sprawl of the nearby Leigh Park residential area in Havant make this an ideal area for the bus to really play its part to beat congestion with one of the Government’s anticipated high profile ‘super bus networks’.

For now, these 24 new buses are a fantastic commitment by First Bus and I’m sure will be welcomed by passengers and turn a few heads of potential passengers. 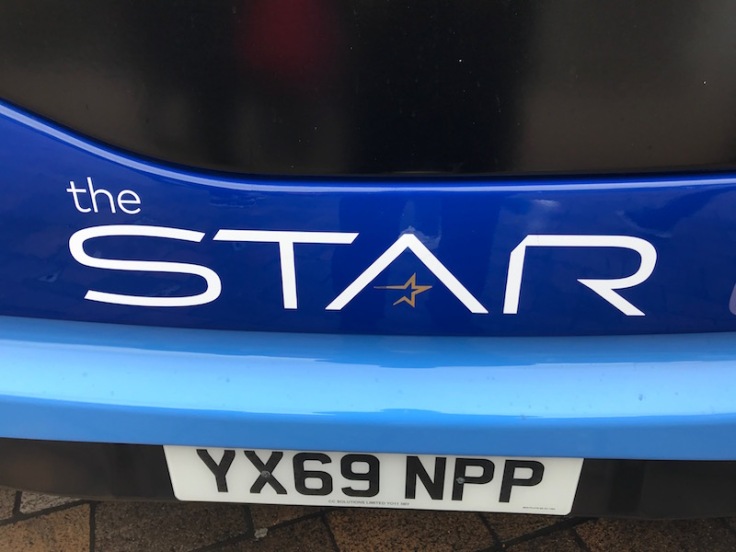 4 thoughts on “Show of the Star”