Indeed it is; and many congratulations to Mark Fowles, managing director of Nottingham City Transport (NCT) and his entire team for picking up the coveted Bus Operator of the Year award at the UK Bus Awards’ annual ceremony in London this afternoon. Not only that, but congratulations also to Mark for the personal accolade of winning the prestigious Services to the Bus Industry Award.

It’s an outstanding record. I’ve had the privilege of sitting on the judging panel for this Award category for a few years now, as well as mystery shopped NCT and other operators in different years as part of the judging process, and am pleased to confirm the Company lives up to its promises. 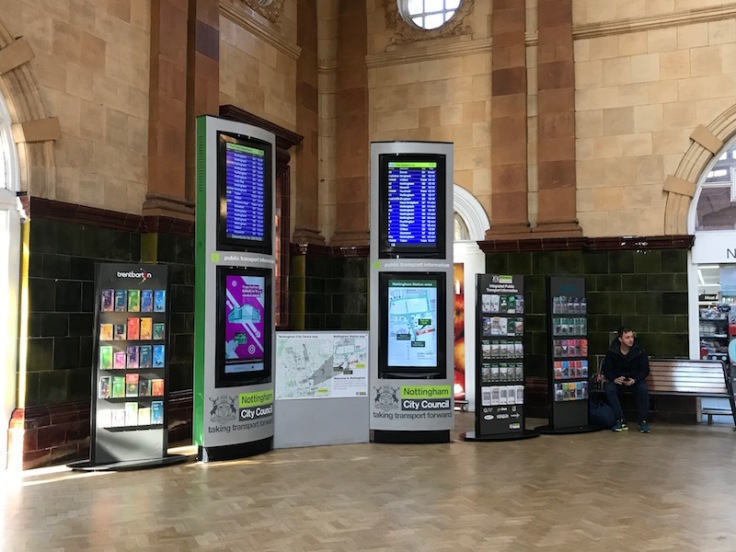 My visits to Nottingham always get off to a positive start being met by a magnificent display of information, maps and timetables about buses in the foyer of Nottingham Station. Commendably this not only includes NCT’s bus services but also those of trentbarton which provides an equally impressive network of bus routes to destinations outside of the City and are also rightly renowned for the quality of their operation. There’s also a large selection of timetables for complimentary tendered routes to NCT and trentbarton’s commercial networks.

Around the corner in the corridor to the station exit there’s information about the tram network adding to the comprehensive public transport information offering. 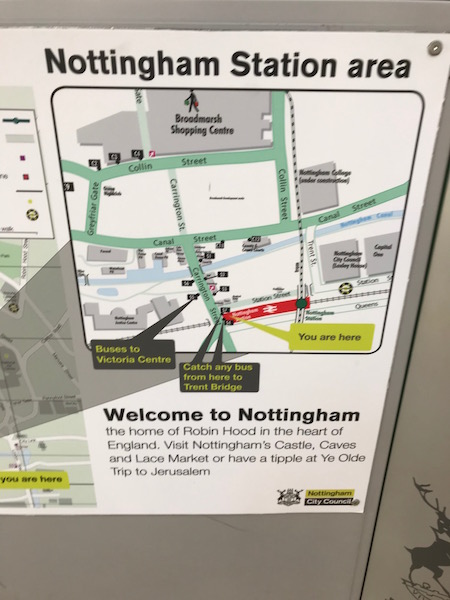 Outside the station the bus stops and shelters are all clearly marked with departure lists, maps, flags showing route numbers as well as ticket and fare information and, of course, there’s real time information boards which work well too. 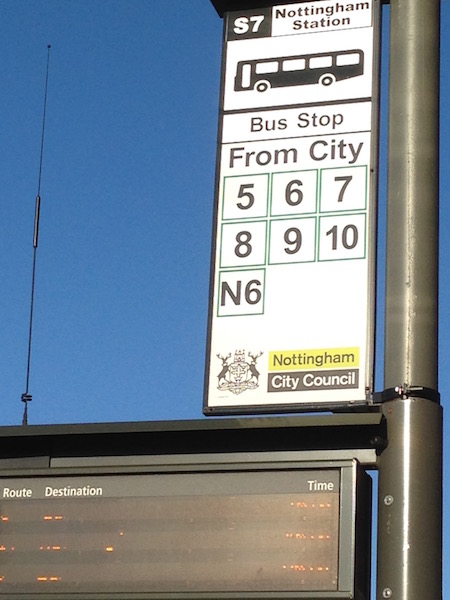 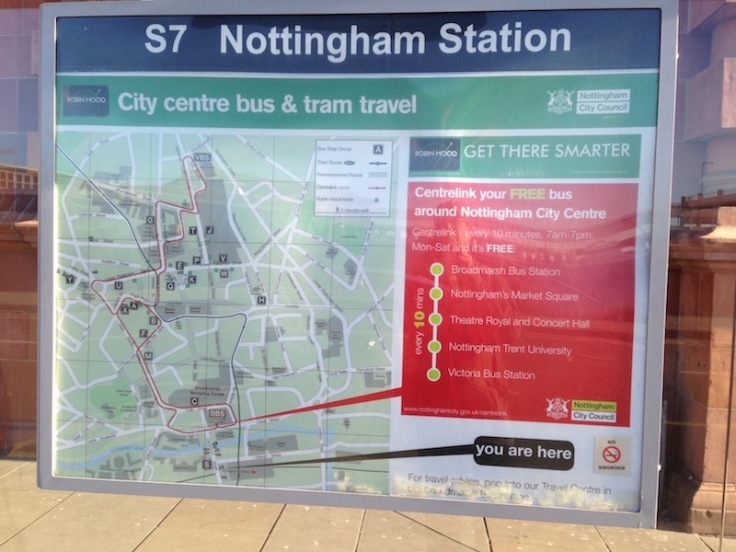 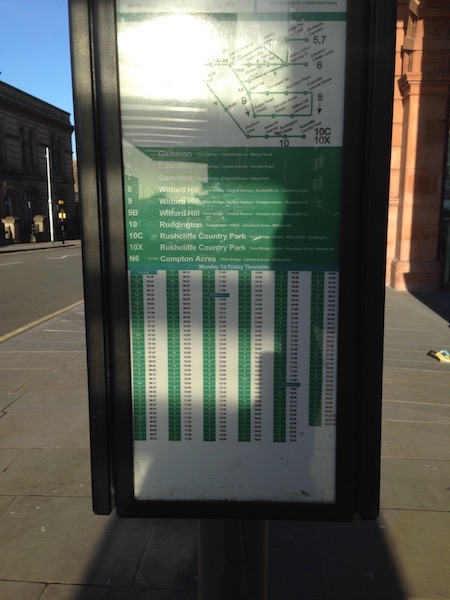 In the city centre, you’ll find a conveniently sited Travel Shop, which although traditional in its layout (a bit basic with large security screens protecting staff) is handy for buying tickets or picking up information. 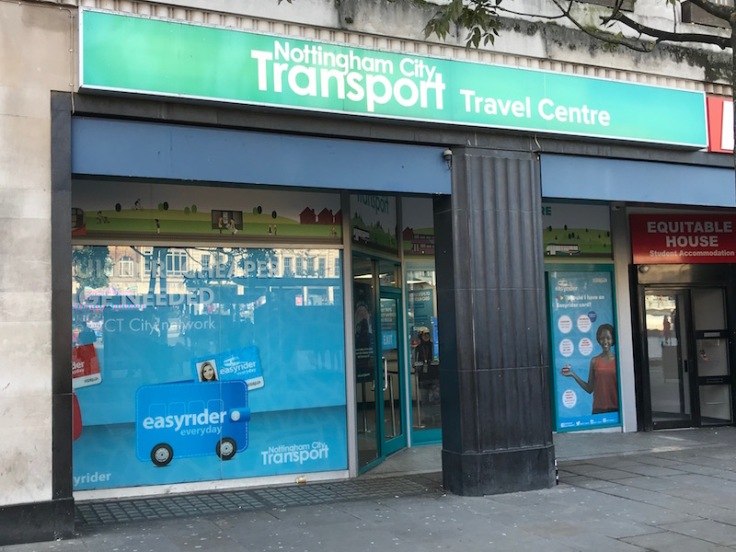 NCT’s insistence on exact-fare-in-the-box cash payment is one of the few negatives about the company, but it does offer an EasyRider smartcard option as well as tickets on mobile phones and is shortly to at last introduce contactless payments which I’m sure will be welcomed by passengers.

There are also easy-to-use on-street ticket machines all over the city provided by the City Council which sell the all-operator Robin Hood branded network tickets on smartcards.

A quick glance at NCT’s network bus map is all that’s needed to get a grasp of where each bus route goes as it’s all colour coded in a simple and easy to understand presentation, applying logically to groups of routes by corridor. 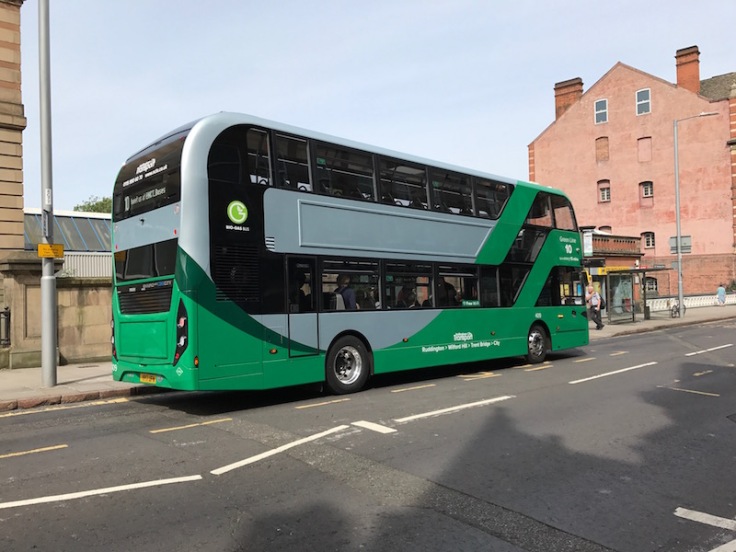 On my visits to Nottingham I’ve never seen a coloured branded bus on the wrong route – the huighky credible system gives great confidence to a visitor to travel around the city by bus. All the main corridors enjoy impressive turn-up-and-go frequencies as well as decent evening and Sunday timetables.

NCT is no minnow.  A fleet of 330 buses makes it one of the largest operators dedicated to one city. Even more impressive is the track record of investment in new buses. The past two years has seen a record investment with a staggering £42 million spent on fleet and infrastructure renewals. 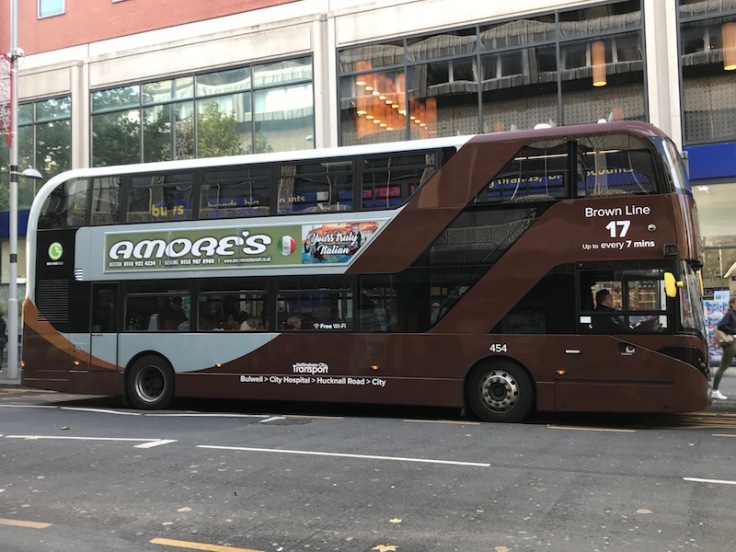 “The entire NCT fleet has been upgraded to Euro VI. 130 brand new buses since 2017 and exhaust treatment systems fitted to 180 diesel buses has resulted in fleet emissions falling 90% and 8,000 tonnes of CO2 and 70 tonnes of NOX emissions avoided over a twelve month period.” That certainly sounds an impressive claim, even if it is just numbers and words to me. It’s also encouraging to see the retrofitting of upgraded exhausts has been achieved with funding support from both Nottingham City Council and Nottinghamshire County Council showing partnership working can be across many facets of work. Not least, of course, is also the pioneering and forward thinking workplace parking levy across the City.

NCT is a great fan of bio-gas buses; there are now 120 operating in the city following the delivery of 67 since April which have upgraded Brown Line 17, Lilac 27, Purple 89 and Pink 28. All this investment has brought the fleet average age down to just 4.5 years.

Passenger satisfaction as measured by Transport Focus was 91% in the 2018 Survey, which though slightly down on the 2017 result of 94% and the all time high of 97% in 2015 is still very impressive for a city operator facing issues of congestion, roadworks and other external challenges. And, of course, Nottingham has the second highest bus use per head (145 trips) outside of London (and Brighton & Hove); so there’s lots of people using lots of buses. You don’t have to be in the City for long before picking up the vibes that this really is a place which embraces buses and has a true bus culture. The smartly turned out fleet of very colourful buses of both NCT and trentbarton certainly helps. Preentation is everything; and in Nottingham it’s quality.

Other impressive exemplars NCT (and its partners) exude include a Control Room with direct access to traffic cameras; the highest number of real time displays in one city outside of London (1,803); 24 Kms of bus lanes; 60 junctions with traffic light priority guaranteeing green light for late running buses; overall patronage growth of 0.61% – and 1.3% on commercial routes; 40% of day tickets now sold on smartphones; a commercial under 19 day ticket with price frozen for 3 years; usb chargers on 40% of buses and more being retrofitted; fleet wide 4G Wi-Fi; and an expanding night bus network.

Just a few reasons why NCT is a well deserved award winner. 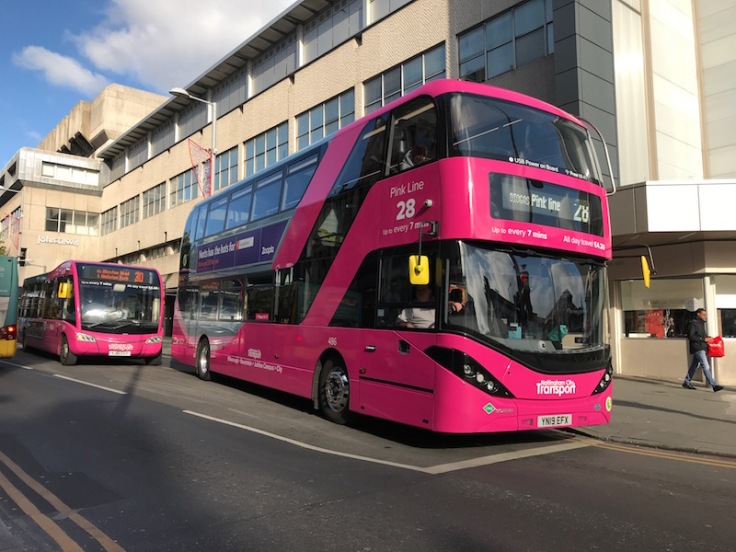 And before anyone observes “aha; this shows what can be done by a bus company with the benefit of municipal ownership”, I would add that my positive comments were just as effusive this time last year for the UK Bus Awards 2018 Bus Operator of the Year winner – Go South Coast – and, I would also commend Stagecoach Cumbria and North Lancs and Ensign Bus, the two worthy winners this afternoon of the Gold Award for 2019 in the Top Shire Operator and Top Independent Operator categories and which are definitely in the private sector, proving ownership is irrelevant when it comes to running a top quality bus company. Oh, and of course, I should add the Gold Winner of Top City Operator in those years when NCT didn’t quite make it to the top – 2017 and 2015 – was, of course, Brighton & Hove – by all accounts another quality PLC owned bus company!

One final observation: NCT’s Operating Margin at just 2.8% for the last financial year is very much on the low side. Furthermore it’s down on the previous year’s already low profitability of 3.63% as a result of rising costs outstripping increased revenue during the year, partly as a consequence of the significant investments being made. Running a low margin operation is certainly one benefit of municipal ownership with its less demanding shareholder;  but it’s a perilously risky business to run a £54 million turnover business on such slim profits. A strong headwind can soon blow the business off course and lead it into choppy waters. There’s no doubt though NCT is well placed to meet any such challenges and its consistant track record of award wins admirably demonstrates its robustness, excellent leadership and first rate service delivery.

Many congratulations for yet another well deserved win.