Seeing the photos online I was already hugely impressed by the sheer presence of the magnificent looking Alexander Dennis built Plaxton Panorama tri-axle coaches launched by Scottish Citylink on their AIR branded service between Glasgow and Edinburgh Airport towards the end of last month.

Costing a cool £400,000, each of the five vehicles entering service seats 75 giving a capacity increase of just over a third compared to the single decks being replaced which have hitherto run the service. 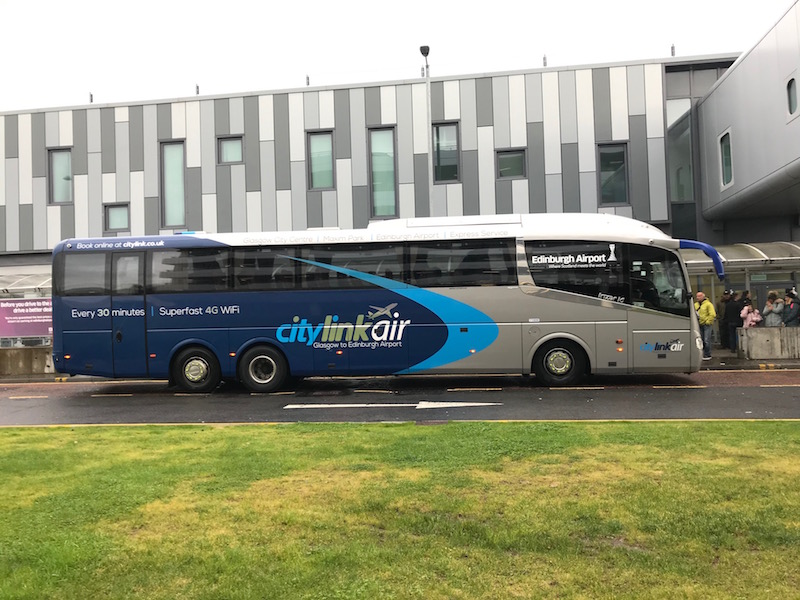 Peter Knight, Citylink’s enthusiastic and dynamic Operations Director, suggested I gave it a couple of weeks or so before heading up to take a ride as the new buses are being drip fed into service as they become available. I thought today would be a good day to give it a try and luckily on arrival at Edinburgh Airport only had to let one of the two single deck coaches out in service go before one of the three smart new double decks on the road turned up.

They look every bit as impressive in the flesh as the photographs portray. Edinburgh Airport is getting used to tri-axles following Lothian Buses’ recent upgrade of its Airlink service but the bright and sleek AIR livery takes image to a whole new level. My good friend Ray Stenning at Best Impressions has really come up trumps with this latest creation. 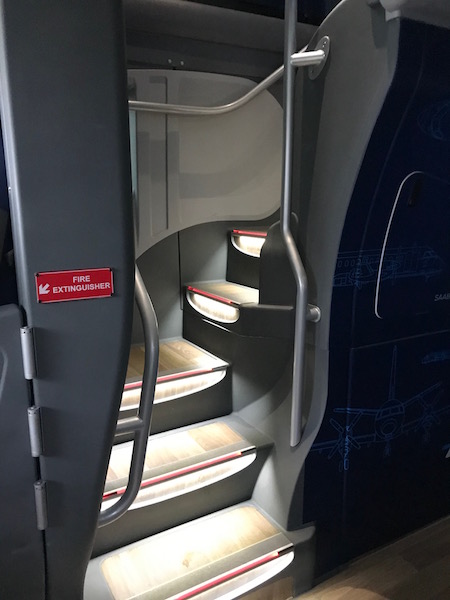 Step on board and the interior is equally impressive. There are two staircases to the upper deck, one in the traditional location immediately behind the driver on the offside with a 180 degree climb and turn ….

…. and another at the rear nearside by the rear access door for wheelchair users immediately in front of the rear luggage compartment. 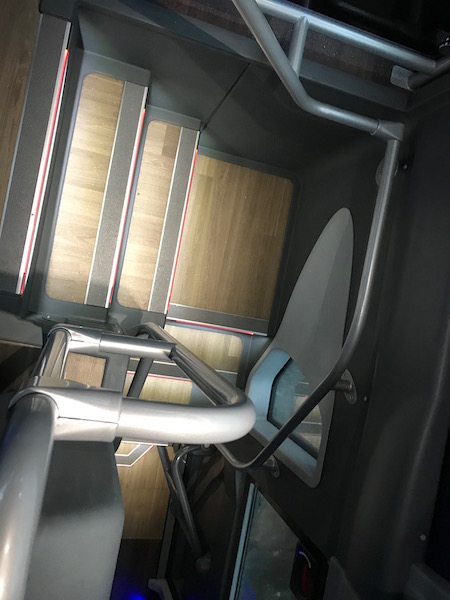 With this rear door only in use for wheelchair users there’s not really much to be gained from using the rear stairs as you still need to make your way through the lower deck to the front door to exit.

I like the comfortable seats, the generous leg room (for a 75 seater), the decor and lighting, including contrasting colour floor, arm rests and smart moquette. You can tell a professional designer has been at work. It really does show.

There are above seat reading lights, usb sockets, Wi-fi, seat back trays and smartphone holders.

On the lower deck there are two slim width tables for four at the front with wireless charging.

I like the light grey surround by the front entrance …..

….. which contrasted with the darker lower deck interior behind the stairs especially without the interior lights on …

I’m not so keen on the front upper deck ‘next stop’ display box, although at least it’s not a full on monitor completely blocking forward views.

It’s good to see all these refinements becoming standard for new vehicles being introduced by enlightened operators determined to raise the quality bar to attract passengers. These vehicles for once almost do deserve the self awarded accolade in their launch news release of being ‘state of the art’ and ‘game changing’.

I say ‘almost’ as to be really ‘state of the art’ and ‘game changing’ a manufacturer really needs to crack the condensation and misting up problem when it rains, especially on the front upper deck windscreen.

Granted it was raining during the journey but that’s not unusual for a Scottish November morning. The demisters above the windscreen were blowing cool air down but the ones along the bottom blowing up were pretty ineffective. 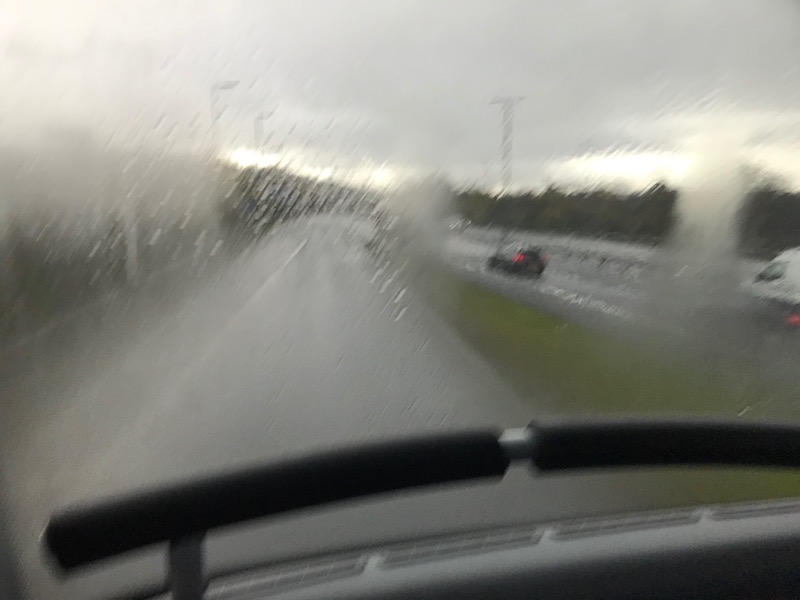 Things did improve for a while but it soon misted up again. Hopefully this is just new vehicle teething problems. For me, a real ‘game changer’ would not only be effective demisters but upper deck windscreen wipers too.

The AIR service is operated for Citylink by West Coast Motors. Introduced in 2013 it runs a daily half hourly frequency from 04:45 to 18:15, hourly until 22:15 then hourly through the night as a diversion of the route 900 Glasgow to Edinburgh service. Journey time is around an hour.

For a miserable mid November morning I was impressed to see a decent load catching the 10:25 departure and a similar number on the next 10:55 departure which I caught from Edinburgh Airport.

The route follows the M8 across to Glasgow with a stop soon after leaving the Airport at Ratho Station before joining the motorway.

About halfway along the route we pulled into Harthill Services to observe a stop and set down a DHL employee from the airport and where I understand there’s an adjacent Park and Ride site which is handy for both AIR and the 900.

The only other stop is just off the motorway at the swish ‘out-of-town’ barrier controlled business campus called Maxim Park (also given the Eurocentral name) with its massive car parking but as a nod to sustainability also facilitating a bus stop for AIR, the 900 and a few other bus routes. 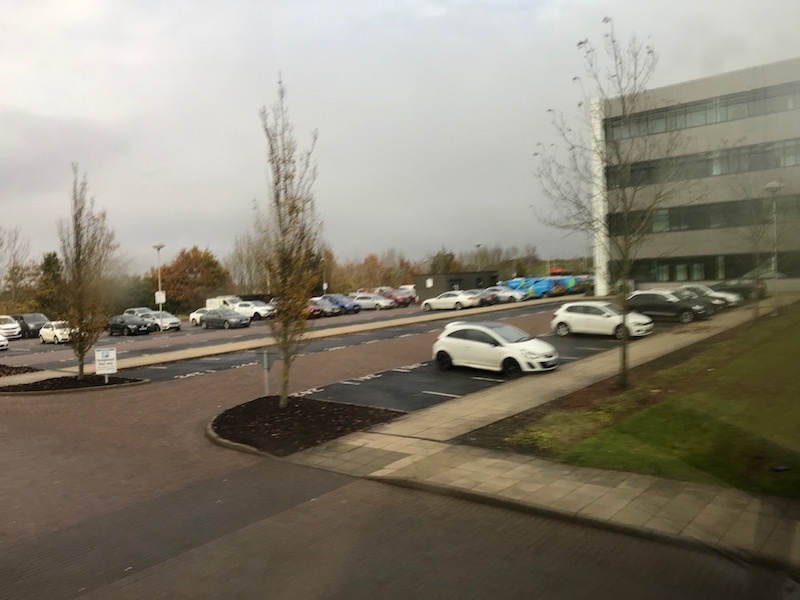 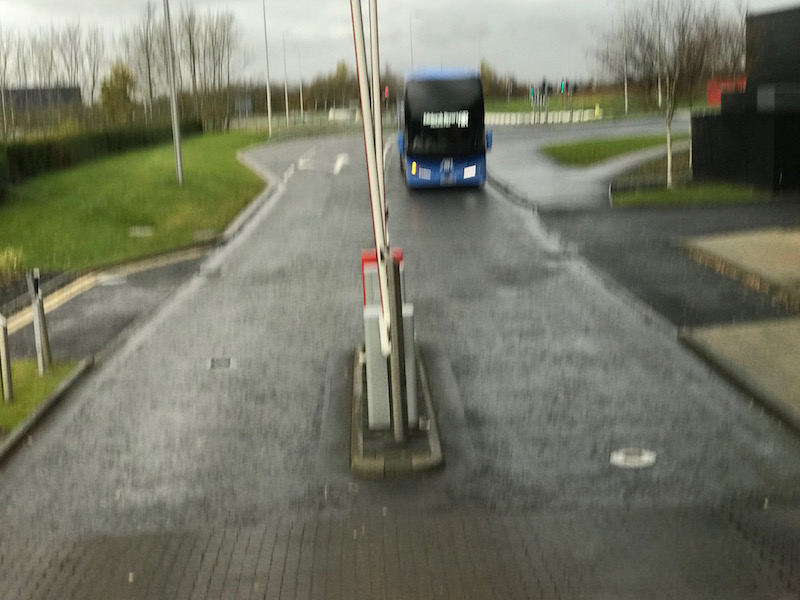 We picked up one passenger but I’m sure peak time buses are potentially busier with commuters helpfully complimenting the airport market.

We had a smooth run into Glasgow and arrived at the busy Buchanan Bus Station pretty much on time.

I noticed a wide area to the nearside of the parking up bay for the service had been marked up and barriered off to allow for the unloading of luggage which is either through a nearside door at the very rear or a flap into a smaller locker above the rearmost wheel. 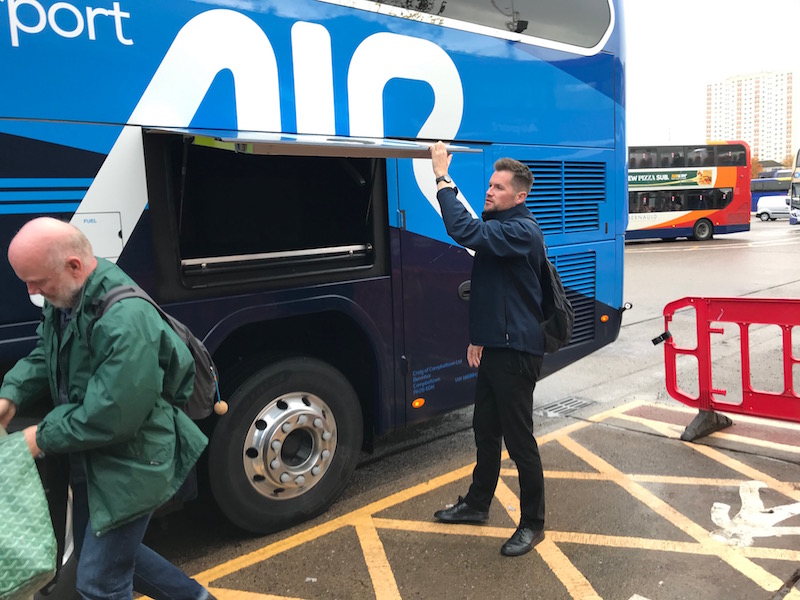 A £12.50 single fare (£21 return) is about average for a service of this kind, and these splendid vehicles certainly make you feel you’re getting a superior, comfortable, smooth, value for money ride. Which you are.

Well done to Peter and the Citylink team. The bar has definitely been raised for airport coach quality.