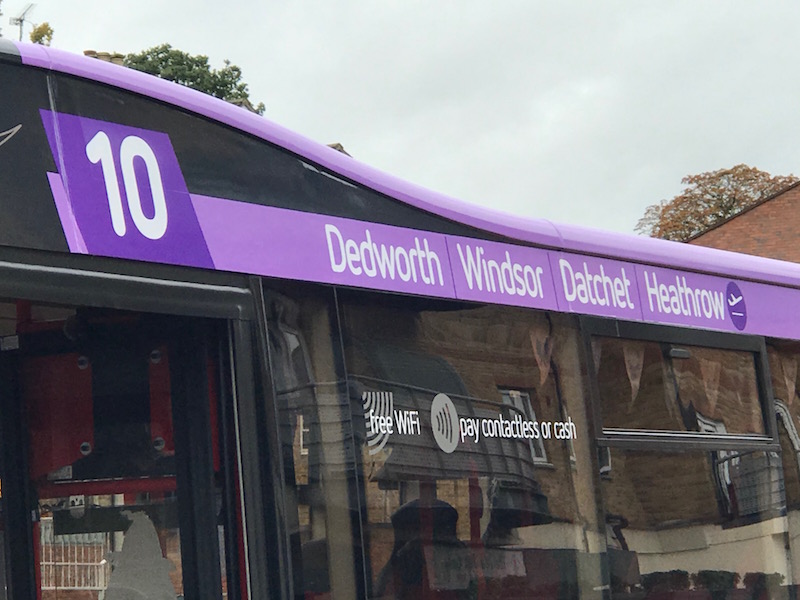 I travelled over to the eastern end of what we used to know as the Royal County of Berkshire yesterday to take a look before the new arrangements kick in.

I understand the greatly improved timetable for route 10 between Dedworth, Windsor, Datchet and Heathrow Terminal 5 starting tomorrow is being funded by Heathrow Airport as part of its continuing commitment to increase public transport use to and from the airport.

From my grisly experience of Terminal 5’s bus station yesterday I reckon the Airport needs to invest in brightening the place up and making the information displays more helpful and up to date as a top priority if it’s really serious about getting air travellers and airline staff to use the bus. It will be far more effective than funding an expansion of a little used bus route. 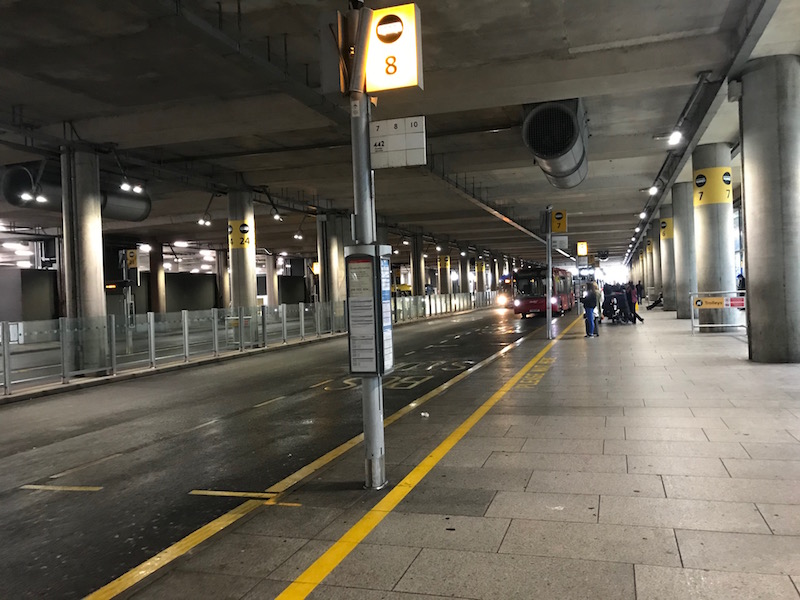 Heathrow’s Central Bus Station has a long shelter which is far too narrow to keep the many waiting passengers for local buses dry and warm in poor weather conditions, but at least being in the open air it has natural light. Terminal 5’s catch-a-bus experience offers a truly dark and dismal under-a-terminal-building wait which is anything but attractive. And if that subterraneum blues isn’t bad enough, information provision is simply dire. 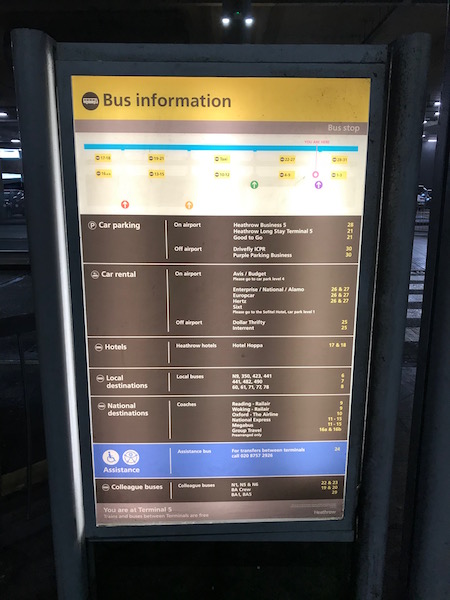 There’s a foreboding array of bus stops lined up numbered from 1 to 31 across a barrier sperated two lanes catering for a full range of journeys with buses to car parks, car hire and hotels as well as traditional bus and express coach services. The latter depart from immediately outside the exit/entrance to the Terminal building but the main departure listing includes long withdrawn bus route numbers (60, 61, 71, 77 and 78) while an extra listing supposedly highlighting TfL operated routes also includes route 442 (operated by Carlone Buses) but no mention of routes operated by First Berkshire and Reading Buses owned Green Line and Courtney Buses. There’s also no mention of the more recent innovation – a fast route X442 between Staines and Terminal 5 operated by Carlone Buses. 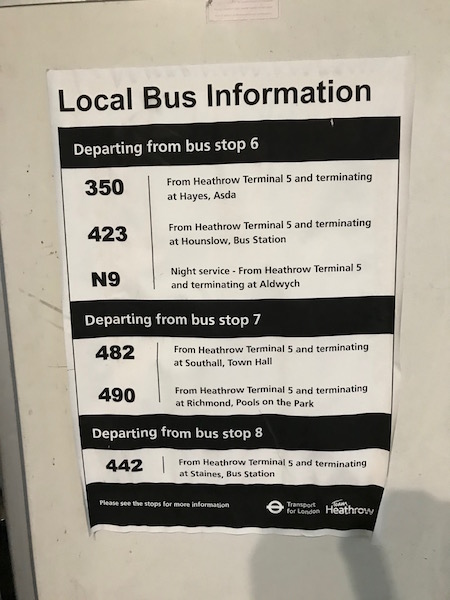 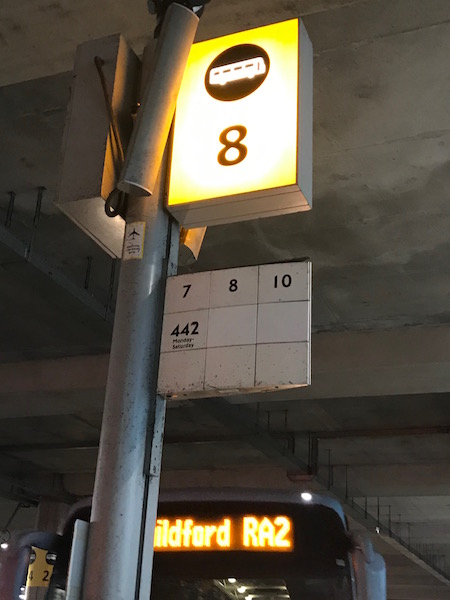 The whole waiting environment is inhibiting and off putting. No wonder I saw bus after bus with minimal loadings arriving and departing including the recent RailAir initiative from Guildford (First’s new route RA2) with just one passenger on board; and the 10:32 departure on Carlone operated route X442 never showed up at all.

In the absence of  “where to catch your bus” information you have to wander up and down the bus stops to see which routes depart from which stop and then the situation is confused by bus stop flags displaying incorrect route numbers or a lack of route numbers.

The situation is not helped by First Berkshire running a half hourly circular route numbered both 8 and 9, with the former number linking Terminal 5 with Windsor (via Staines) where it changes into a 9 to return via Slough and direct to Terminal 5 (in both directions). It’s easy when you know the logic of it all, but totally baffling without any information to explain it. Furthermore there’s a slower route 7 to Slough via Langley every 20 minutes and then there’s the hourly Green Line 703 also direct to Slough. Passengers have a great travel choice but it’s not much good if they can’t easily see where and how to take advantage of it.

I arrived to catch the about-to-be-withdrawn 10:40 journey on route 11 which follows the same route as route 10 as far as Datchet then continuing to Slough instead of Windsor with a journey time of forty minutes. It was unnerving to see the bus stop timetable showing this as a journey numbered 10 and operating to Windsor but I remained confident noting the display is dated 27 May 2018 therefore being many months out of date (and this immediately outside the UK’s premier airport’s newest terminal!). 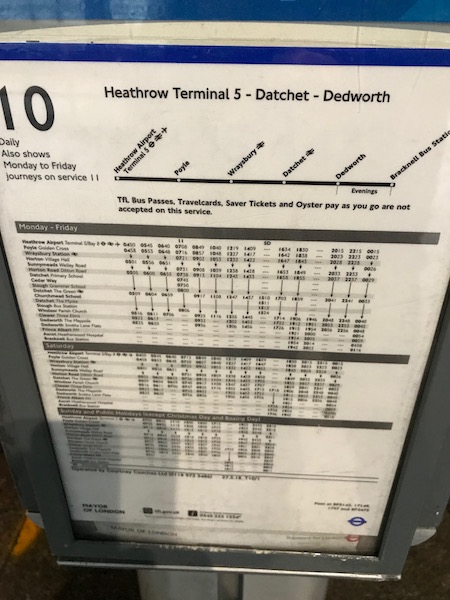 My confidence was boosted while waiting when a confused passenger asked me where to catch the bus to Slough showing me an app on his smartphone displaying the upcoming 11 departure. He didn’t seem interested in my trying to persuade him to catch the First Berkshire route 9 at 10:30 direct to Slough which would get him there in 24 minutes, let alone knowing which stop it departs from as there’s scant mention of it and I was reluctant to go for another wander up and down the bus stop line looking for it. 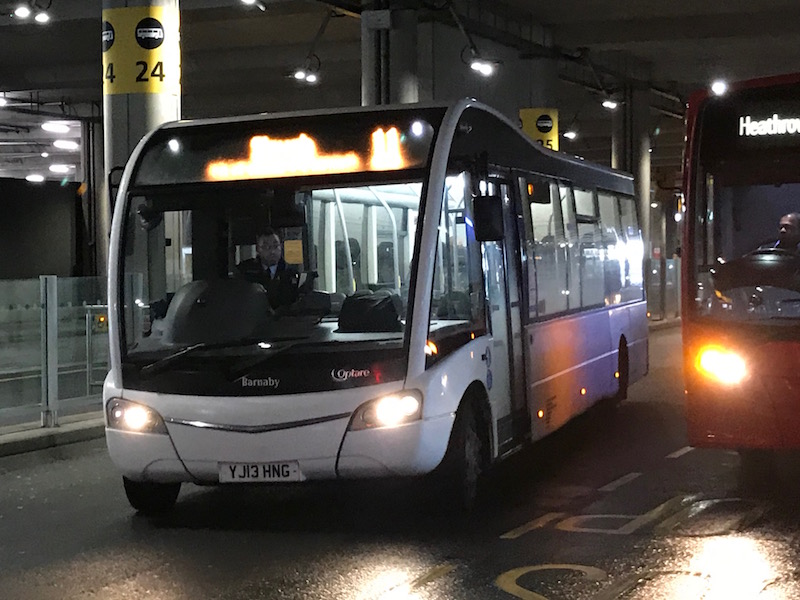 Luckily he seemed happy to join me on the longer more rural and reservoir spotting ride on the 11 which at least helped the number of passengers to reach four including us Slough bound two, a flight attendant heading home to nearby Poyle and another passenger to Datchet. Based on that experience I don’t think this rather oddly timed one-off off-peak journey a day to Slough is going to be missed in the new timetable. That’s a shame, as it’s quite a quirky ride along narrow lanes nestling between the M4, the SWR operated Windsor and Eton Riverside railway line and an array of reservoirs. 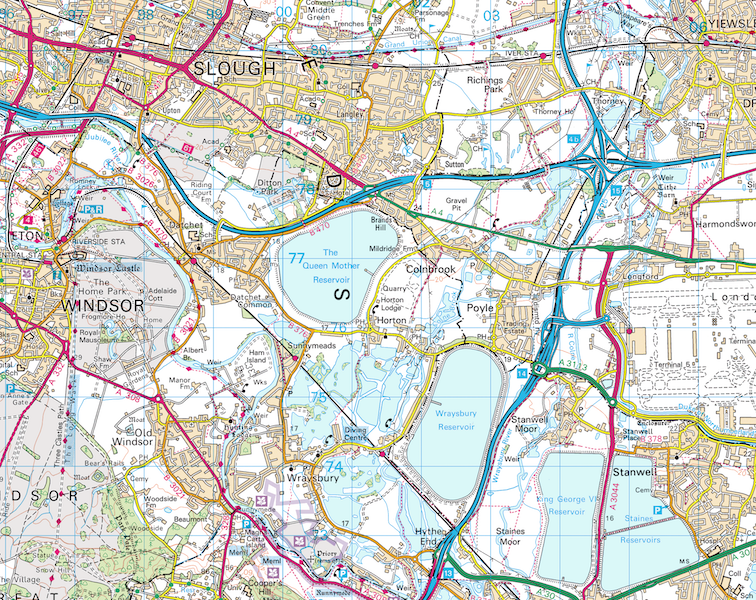 But it’s all change from Monday when there’ll be a consistent and improved hourly service on the 10 from Dedworth and Windsor until around 17:00 (including a new early arrival into Terminal 5 at 03:48) with evening journeys after that reduced to arrivals at 18:27, 19:37 and 22:05. 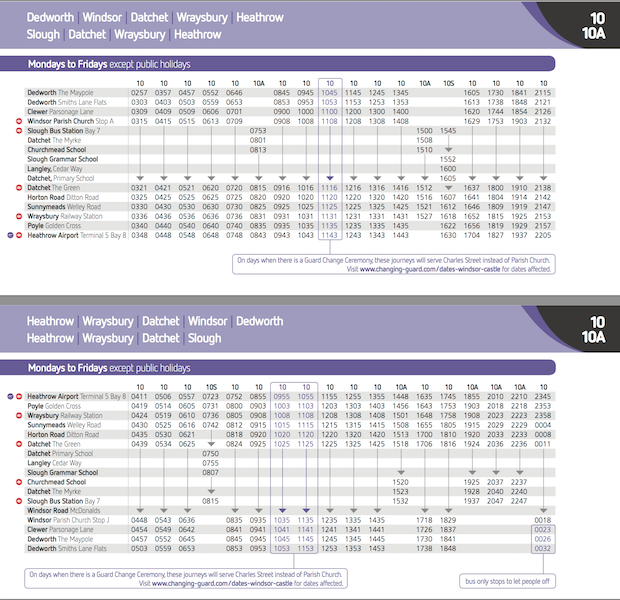 Some of the early morning journeys currently run via the village of Horton (between Datchet and Pyle) but this link will cease due to lack of use with all journeys running via Sunnymeads and Wraysbury.

Between Windsor and Dedworth the hourly timetable on the 10 is co-ordinated with a reduced hourly (currently half-hourly) timetable on route 2 (Slough-Windsor-Dedworth), although between Slough and Windsor the new route 2 hourly timings are close to the Green Line 703 times so not particularly convenient. 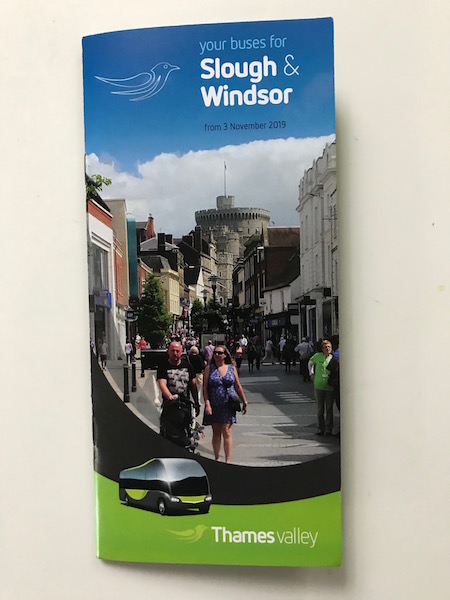 There’s a rather attractive slimline timetable book for the Slough and Windsor area available containing the new timetables and a route map. This also helpfully includes a cooridnated timetable between Dedworth and Windsor for routes 2 and 10, but strangely I can’t find a link to it online where only the separate timetables are shown. 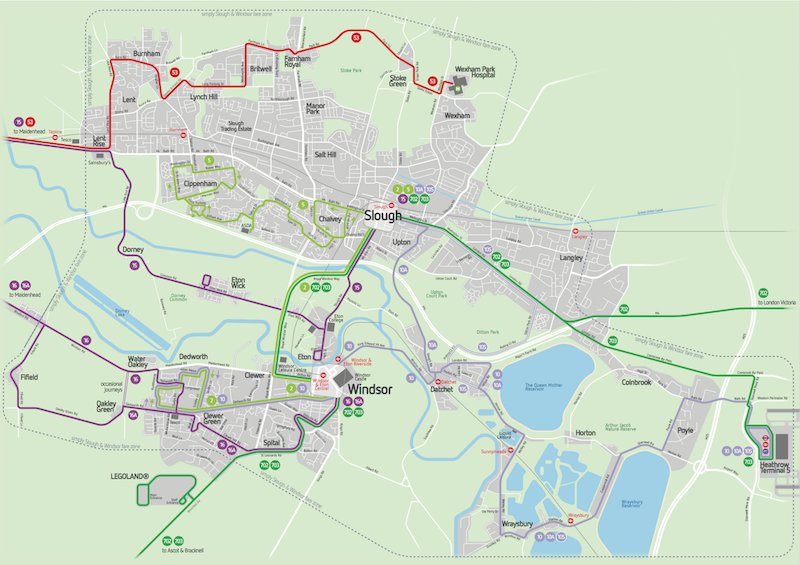 A new-look darker Thames Valley livery is being rolled out to replace the Courtney brand name and I spotted a number of buses with their new vinyls ready for Monday’s expanded route 10 being used on other routes as well as doing some route training for drivers. 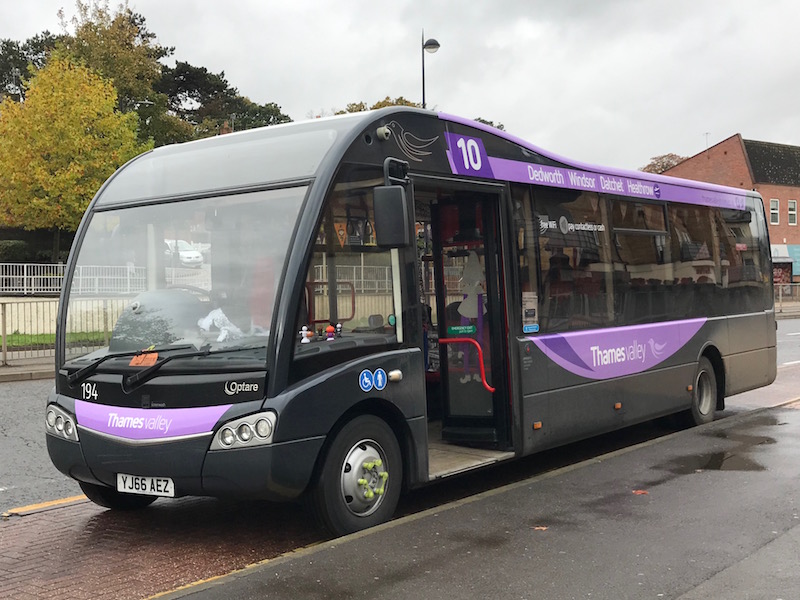 It looks as though some inter-working between the half hourly route 5 between Cippenham and Slough and the revised hourly route 2 between Slough and Windsor/Dedworth is envisaged with buses carrying a combined branded livery. 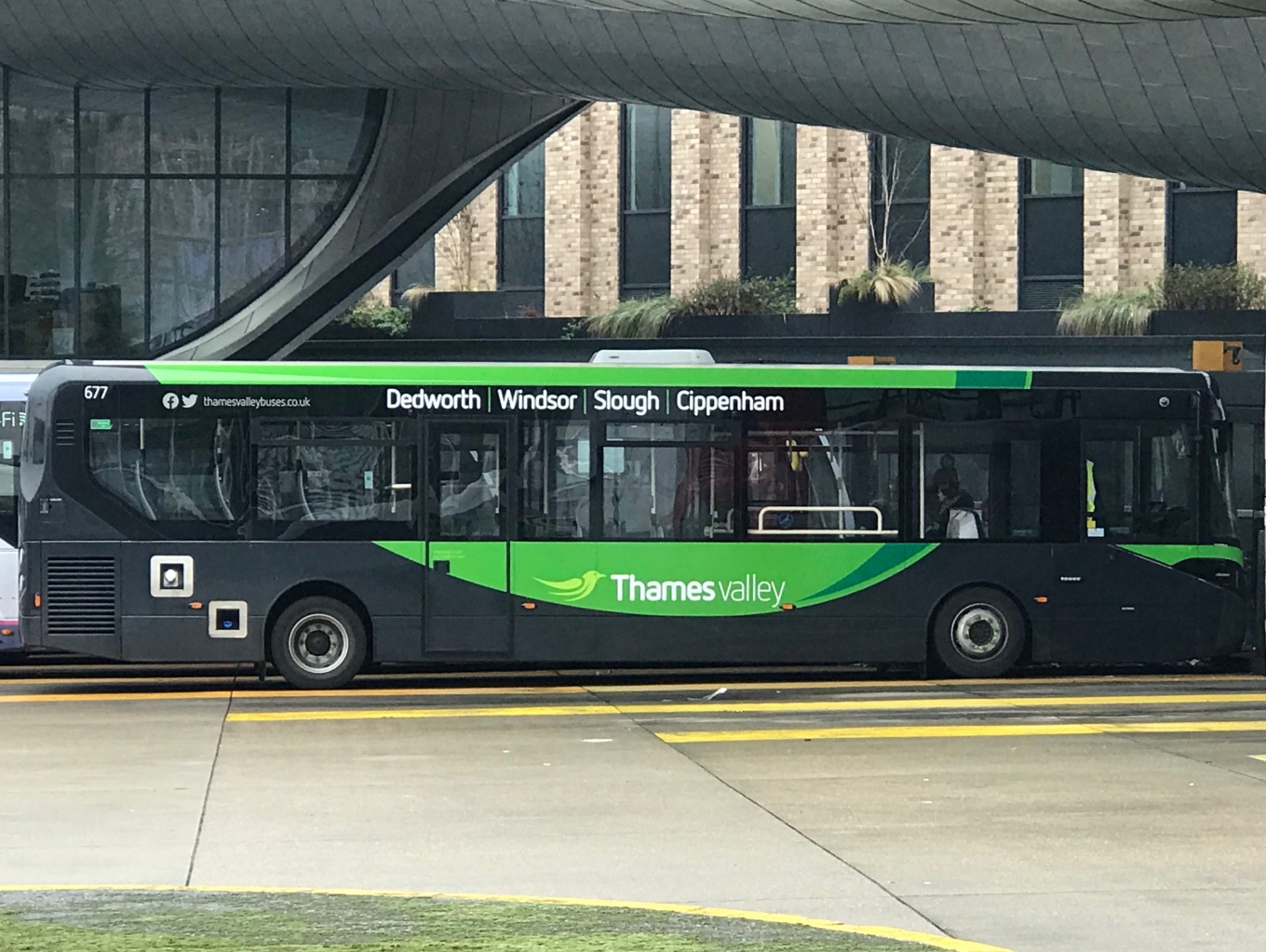 After my route 11 experience I took the opportunity to take a circular ride on Thames Valley (née Courtney Buses) route 15 to Maidenhead then round to Windsor on route 16 and back to Slough on route 2. 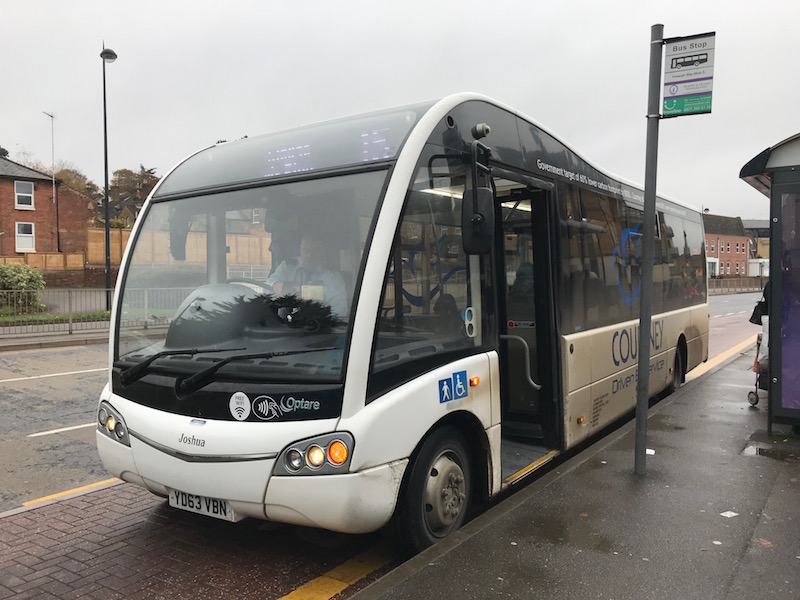 Route 15 was one of the routes given up by First Berkshire in January 2018 who ran it as far as Eton Wick however Courtney Buses saw merit in extending four of the ten journeys a day across Dorney Common and Dorney to Maidenhead. 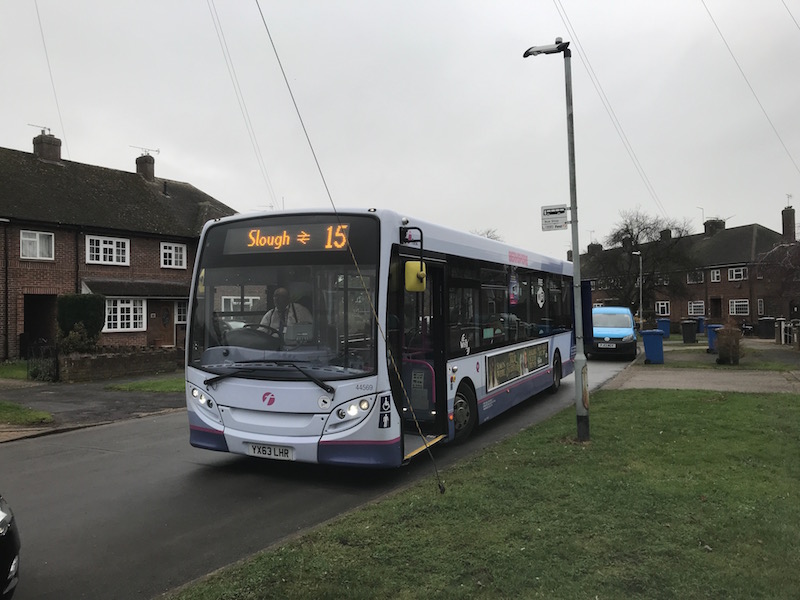 Although we carried about a dozen passengers to Eton and Eton Wick, sadly only two continued on to Maidenhead. However, route 16 back to Windsor via the lovely village of Bray as well as Holypot and Dedworth was much busier and looked to be a nice little money-spinning hourly service. 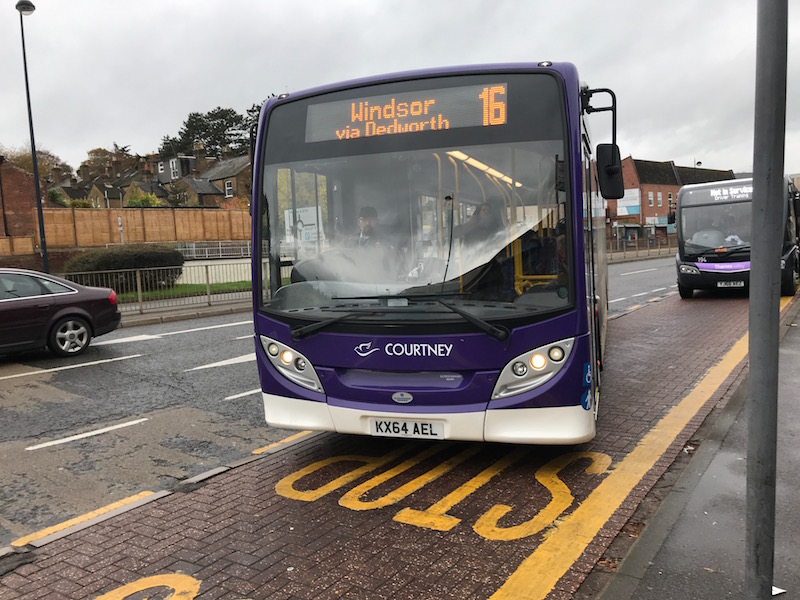 My short trip back to Slough on route 2 was with only around half a dozen other passengers perhaps indicating why that frequency is being reduced from two to one bus an hour albeit with Green Line 702 and 703 also providing one bus an hour each as well. 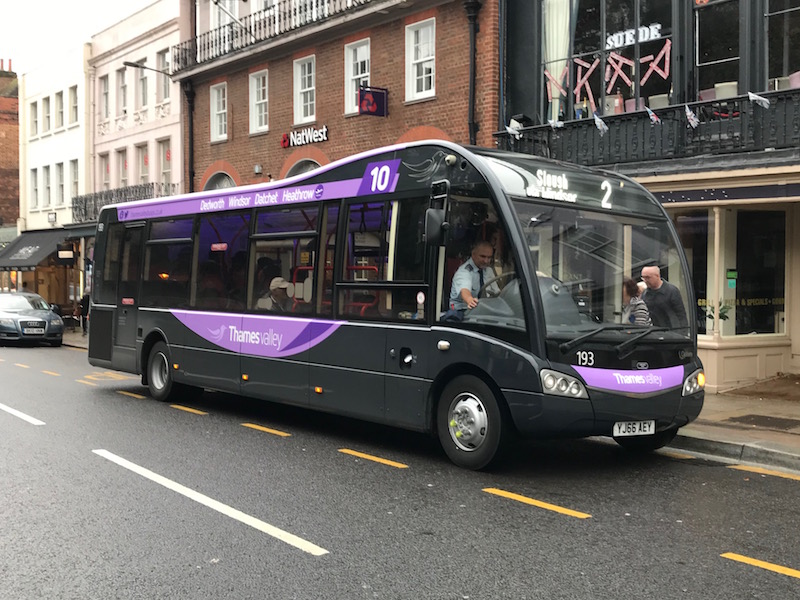 Except, as highlighted above, it’s not very well coordinated. For example departures from Windsor to Slough from lunch time into the afternoon are at 15, 35 and 38 minutes past each hour. 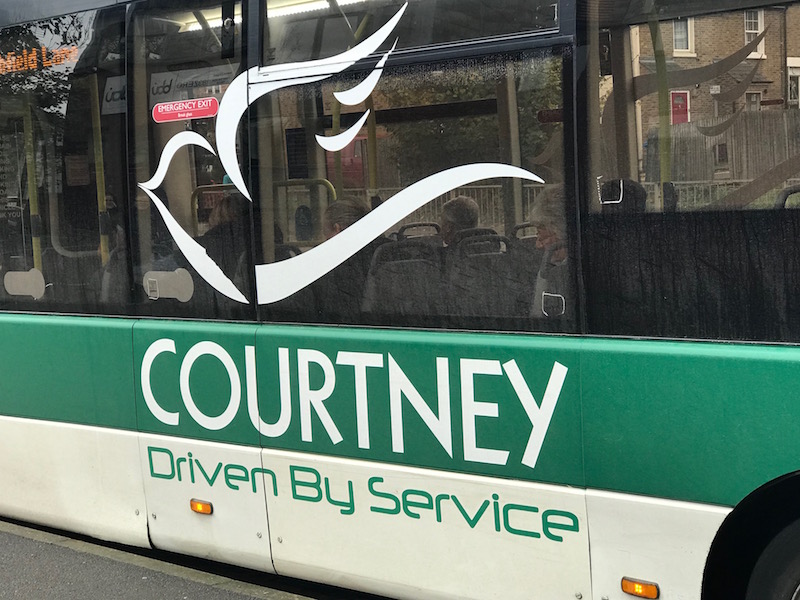 It makes sense for Reading Buses to consolidate its acquisition of Courtney Buses earlier this year with the set-up it began at the beginning of 2018 in Slough when it first introduced the Thames Valley brand for two of the routes (2 and 5) it took over when First Berskshire withdrew. Courtney Buses was a respected family owned company which has done a lot of good things to revitalise the network left by First in the Bracknell and Maidenhead areas but I suspect it’s been an interesting challenge over the last six months to bring standards up to those commonplace in the main Reading Buses operation. 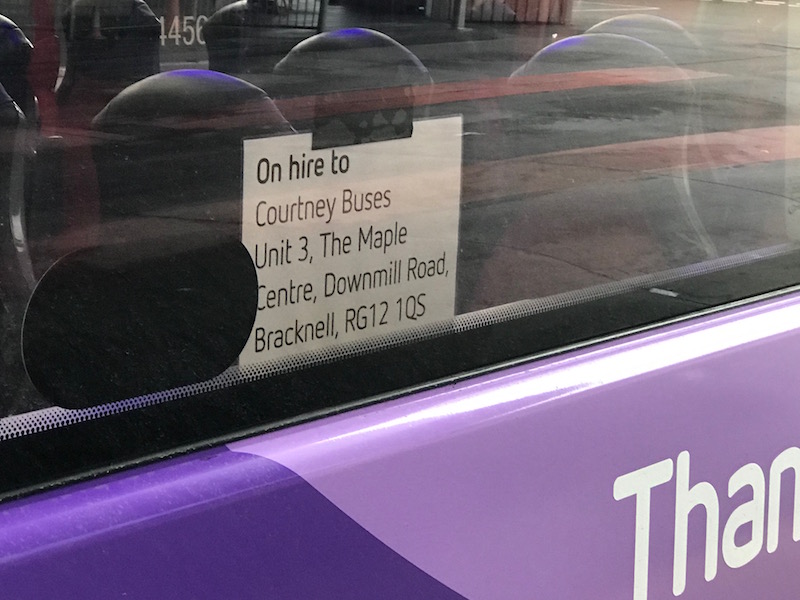 I noticed a few oddities yesterday including a bizarre display across three in-bus monitor screens explaining why an increase in fares was being introduced in March 2019 …. eight months ago. 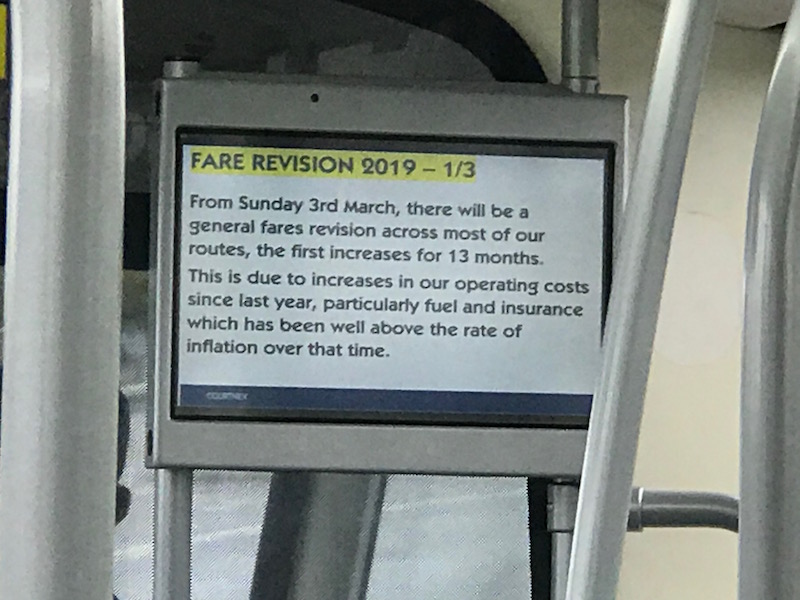 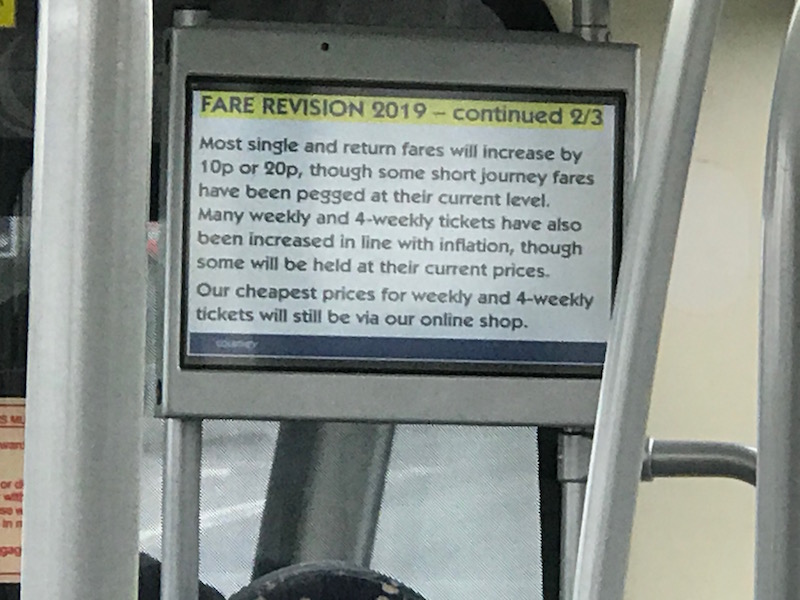 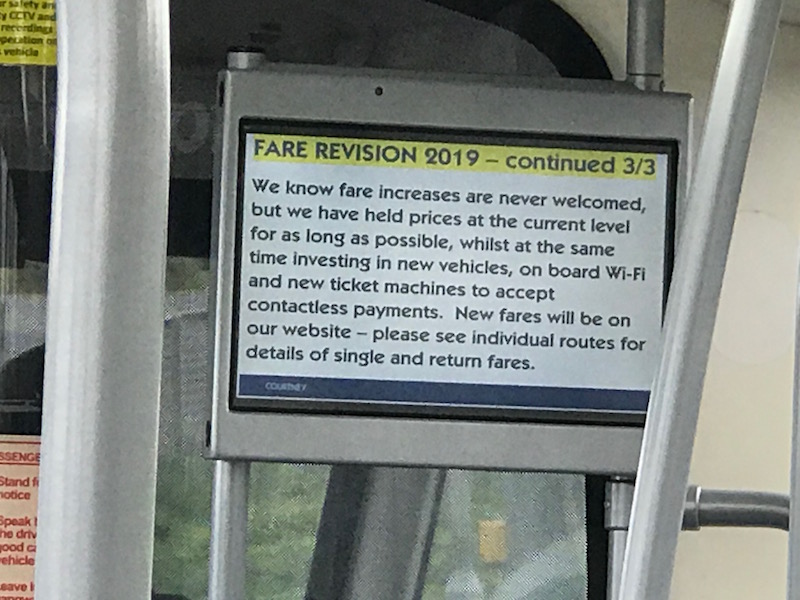 I was also intrigued that dogs still pay fares in this part of Bark-shire! Still at least it’s a Rover ticket. 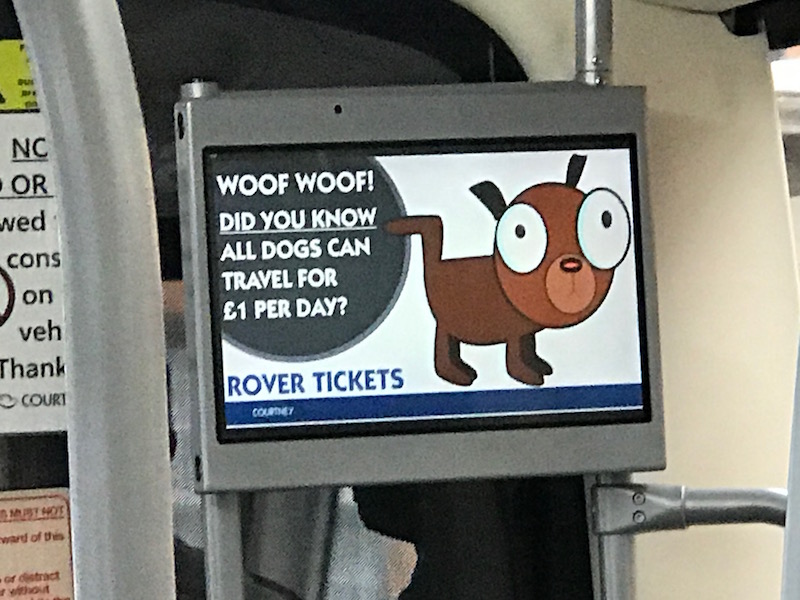 It certainly brings back fond memories to see the Thames Valley name back on buses running between Slough, Maidenhead and Windsor and the new livery is attractive and colourful, a bit more sombre than the interim one introduced in early 2018 but I understand it’s part of a family of brands including the Newbury & District set up over on the western side of Berkshire. 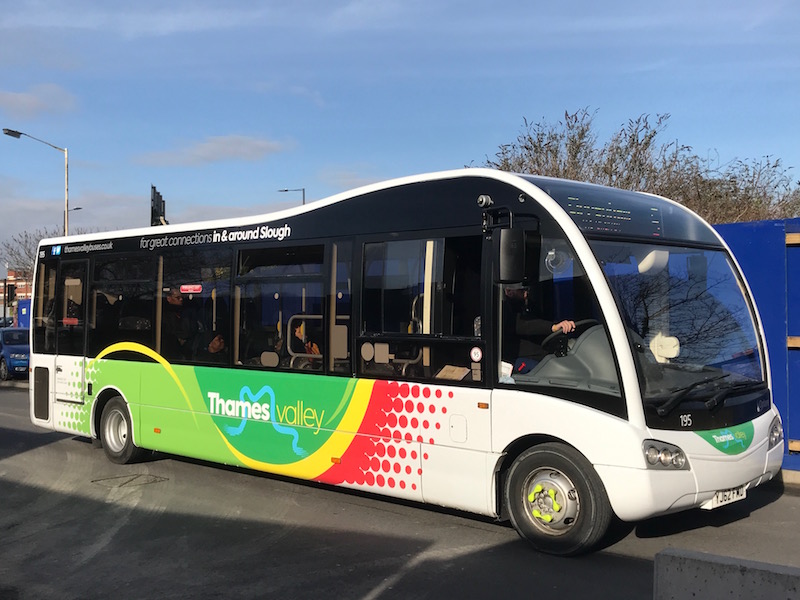 With First Berkshire also using colour coding for their routes based on Slough, the town is turning into a very bright place for buses. Long may that continue. 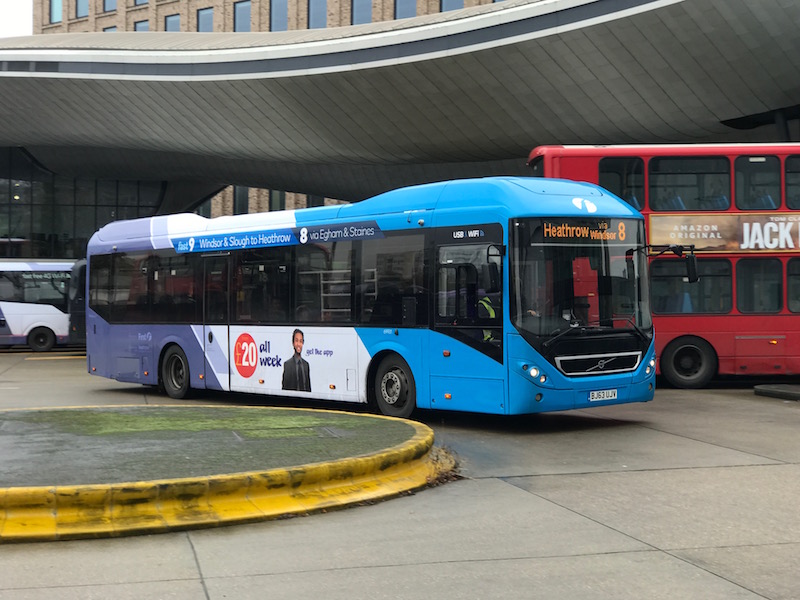 BusAndTrainUser – journeys around Britain by bus and train Thames Valley boost to Terminal 5
%d bloggers like this: