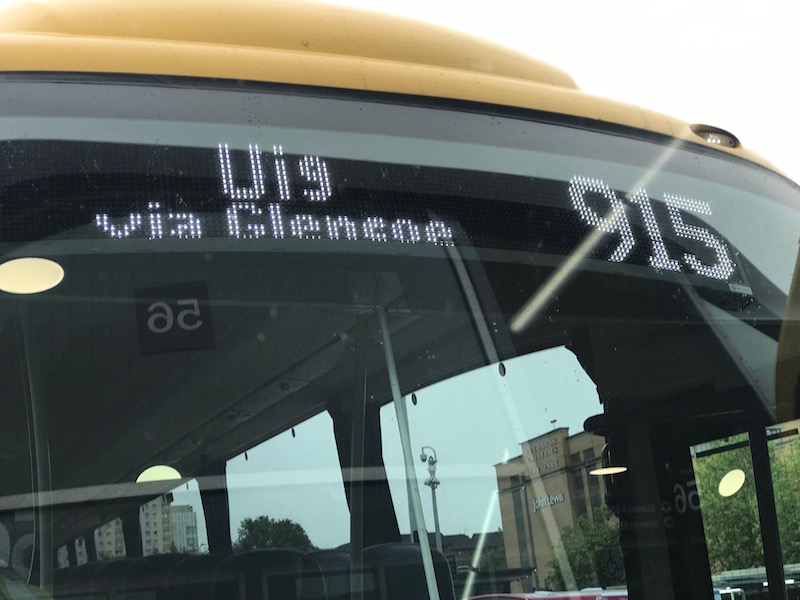 It’s about 230 miles long. It takes 7 hours and 50 minutes. It’s Scottish Citylink’s route 915 (or 916) from Glasgow’s Buchanan Bus Station all the way to Uig Pier on the Isle of Skye via Fort William and Kyle of Lochalsh.

I’ve travelled along this route a few times, but never from one end right through to the other in one go. Until today. Except, not quite, I actually hopped off at Portree for an overnight stop tonight keeping the last 30 minute ride to Uig for first thing tomorrow morning as there’s no ferry to North Uist from Uig on a Tuesday evening. 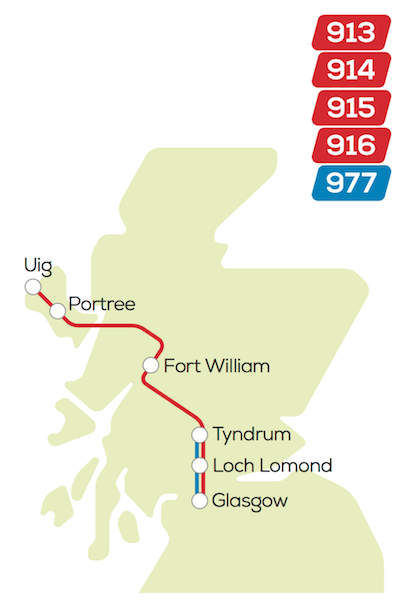 Route 915/916 is a bus route in two halves. There are nine journeys a day between Glasgow and Fort William, with three continuing on to Kyle of Lochalsh and Portree and two of those go on to Uig. Those three journeys to Portree are joined by four more from near Invergarry (which start in Inverness), one of which also continues to Uig. So it’s a very good service for a such a sparsely populated area.

* There’s a very strong argument to say the 915 is not a bus route, more an express coach route, but passengers use sections of the route as they would a local bus service – for example we carried a passenger into Fort William from Ballachulish (27 minutes) and another from nearby Corran as well as a school lad from Fort William home to Spean Bridge, another home with shopping to Invergarry, one from Kyle of Lochalsh travelling just over the bridge to Kyleakin and two travelled from Broadford to Portree. You wouldn’t get that many local pick ups and set downs for short rides on an express service.

Furthermore the timetable lists 64 timing points for the journey which, stripping out the breaks totalling 78 minutes, means stops listed every 6-7 minutes. That has all the the hallmarks of a bus route rather than an express route to me. And Scottish concessionary passes are valid throughout. I rest my case.

Now that’s out of the way, here’s how my journey went today. 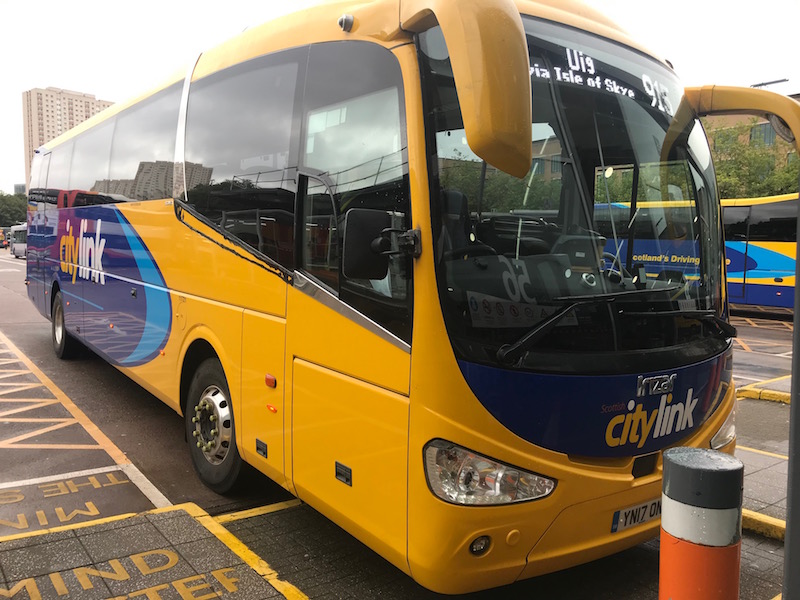 The West Coast Motors coach (I agree the vehicle is not a bus!) arrived in its smart Citylink livery on the stand in Buchanan Bus Station at 09:25 in good time for the 10:00 departure.

Boarding commenced at 09:30, well, suitcases boarding commenced as in use of the under seat side lockers first for the four of us already waiting and the passenger door pointedly closed; then when no more passengers with cases turned up the driver decided to let us board and ticked us off his manifest list one by one.

Over the next twenty minutes our numbers increased until 24 were on board in very good time at 09:50 with three more boarding by 09:55 when we were all ready for the off with five minutes to wait.

Interestingly there were two groups of four on board, one group of three and four groups of two with eight passengers (and myself) travelling alone. Almost all were making leisure journeys and were of all ages with every decade of age from 20s to 80s represented; there were Scots, English and a fair few Germans.

The group of three Germans boarding at Buchanan Street hadn’t pre booked nor bought tickets from the open three person Citylink Travel Centre opposite our departure stand but the driver was happy enough to sell them tickets from his ticket machine …. for £76.50 (for three day returns to Glencoe). There was a bit of language confusion for a few minutes with the driver clarifying three times it wasn’t £17.50 he needed but £76.50, but they finally understood and coughed up in cash when finally it dawned how much it was.

Citylink is not a cheap option. Two passengers enquired what the fare to Portree was when we got to Tyndrum for our first five minute brief toilet stop. 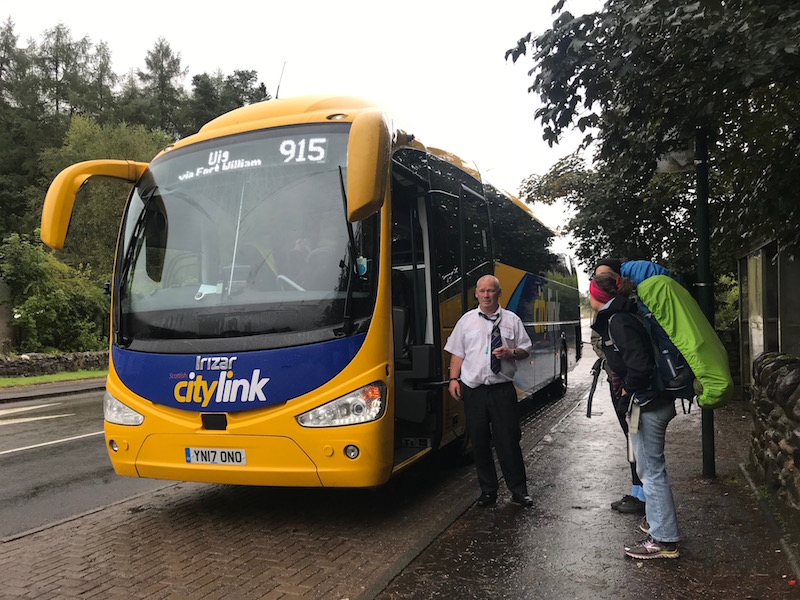 It turned out £42 single each was too steep for them and they headed off thinking what the alternatives might be (not a lot). I’d paid £46.50 for my single fare bought on line a month ago. 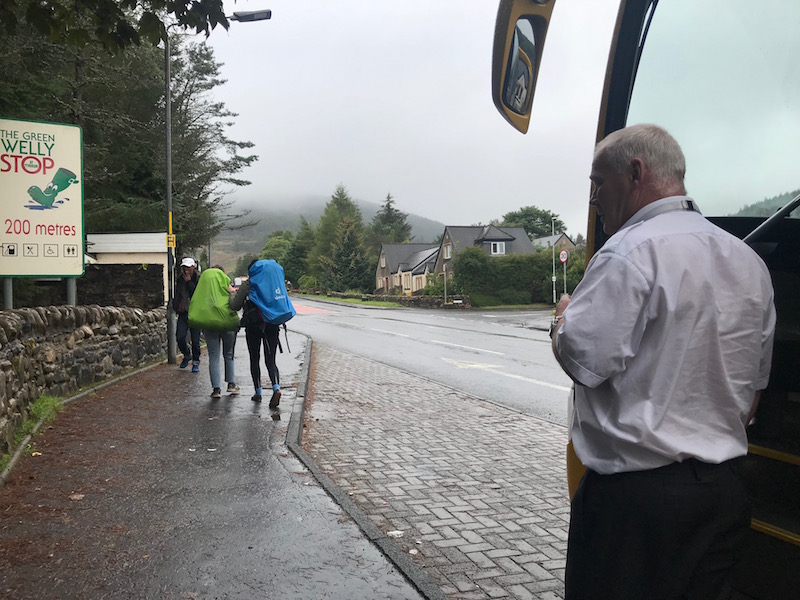 I didn’t see anyone else pay by cash today – most had prebooked tickets, a few had the three day £49 pass (which is amazing value), and some paid by contactless or ApplePay. 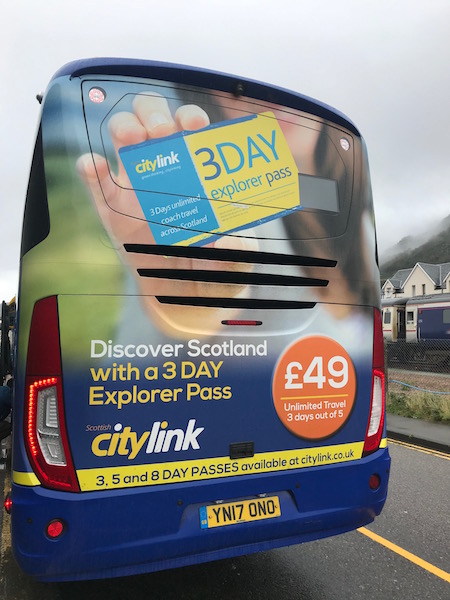 Before I forget again I just want to add an extra observation to yesterday’s blog to note only 5 of the 145 passengers on route 90 paid by exact fare cash into the fare box. Quite astonishing how things have changed.

Yesterday I spent 2 hours 44 minutes on an arc less than five miles from Glasgow’s city centre on route 90. Today in that time I was passing Glencoe! 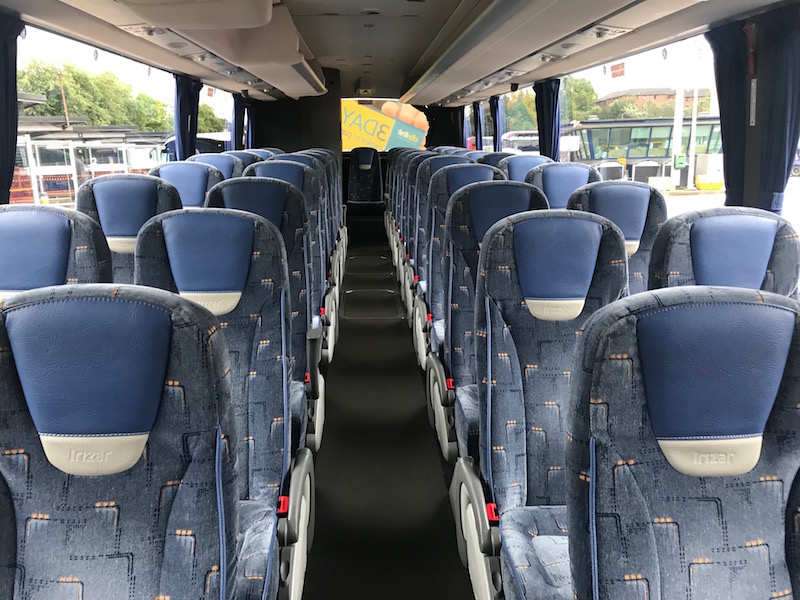 The two year old Irizar bodied Scania wasn’t lavish but was comfortable enough. I appreciated the seats not being too high backed to maximise views through the large windows.

I was a bit surprised there were no usb points, sockets or Wi-fi – most odd for such a modern coach on such a long route. There was a prominent digital clock which I like but annoyingly was five minutes slow. There were two TV style monitors and thank goodness they were switched off. A toilet was available at the rear which wasn’t excessively used bearing in mind we had a few toilet stops along the way. 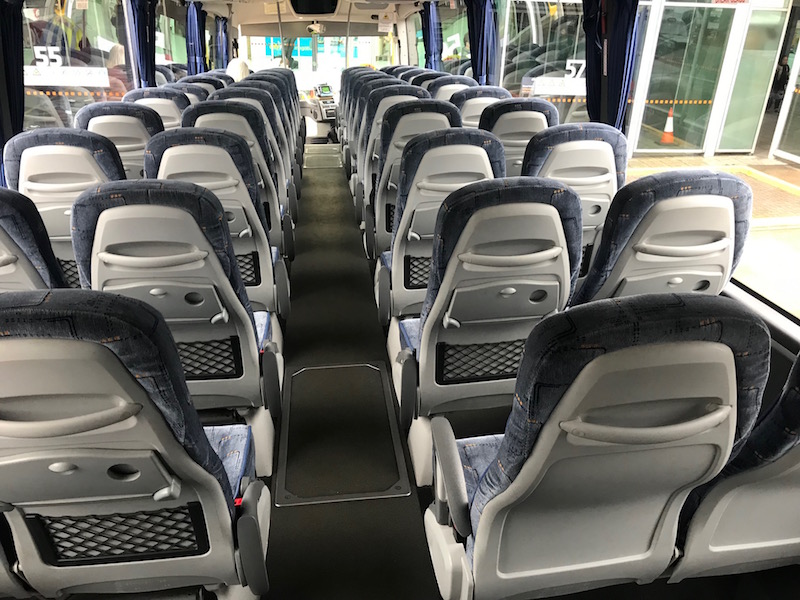 Four of the nine departures from Glasgow to Fort William take a route via Glasgow Airport. My 10:00 journey was one of those and we picked up two more passengers there making 29 in total on board. Extra time is allowed for the Airport route – we made it there in 20 instead of the 25 scheduled minutes and then rejoined the usual route by taking the Erskine Bridge over the River Clyde.

Having a pick up at the Airport is convenient for airline travellers jetting in but personally I’d never risk it because of the unpredictable nature of airline arrivals. 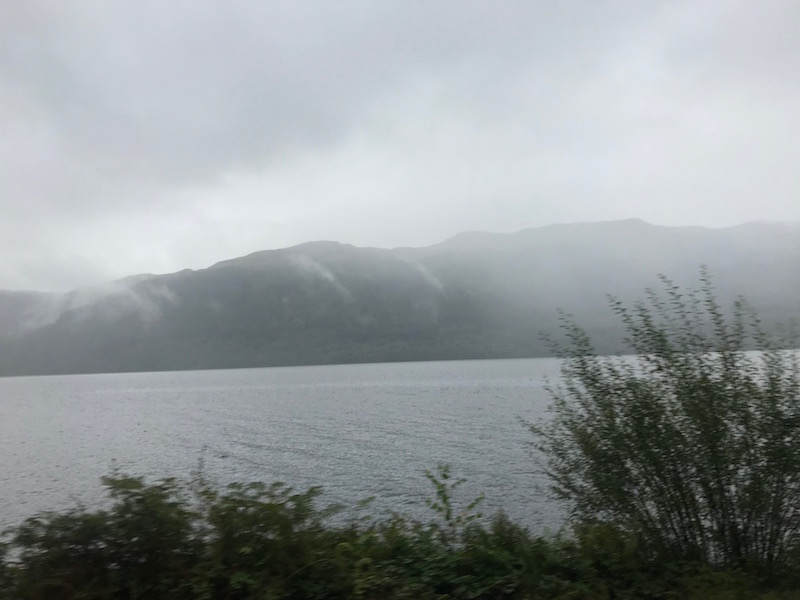 After 45 minutes we’re near Balloch with Loch Lomond soon appearing between the trees on the offside. By 11:00 and for the next half an hour to Ardlui we enjoy unceasing spectacular views across the famous Loch as we take it carefully along the twisty and narrow A82 running alongside. Just after Ardlui our first two passengers leave us in Inverarnan.

By 11:45 we’re passing Crianlarich station with its famous refreshment room and with a journey time from Glasgow exactly comparable to how long ScotRail’s trains take to reach here. 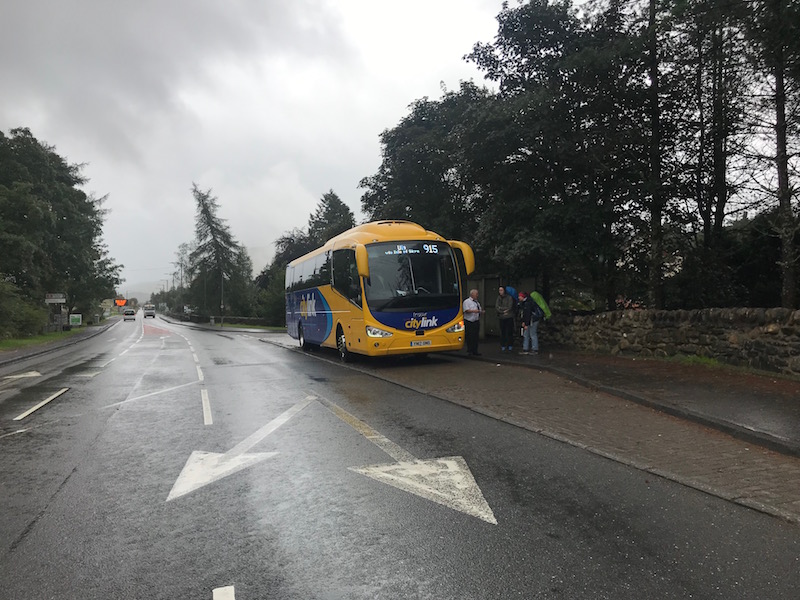 Our short leg stretching and toilet stop comes just up the road in Tyndrum where we arrive a couple of minutes early giving a nice 7 minute break for a short wander.

Immediately after we get going again at 10:58 we meet our first set of temporary traffic lights – these cause us a nine minute delay, which unsurprisingly we never fully recover from arriving into Fort William five minutes late. But not before we pass more scenic delights including the Tyndrum forests and for a while we pass alongside the West Highland line as it heads towards Bridge of Orchy. 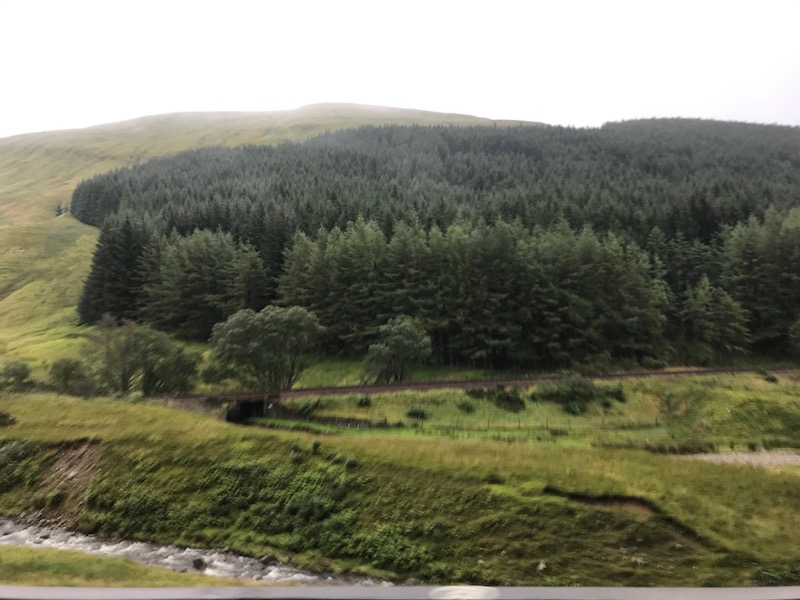 We pass at the end of Station Road and then let the railway leave us to deviate off towards Rannoch Moor and Corrour while we slowly climb the A82 towards Glencoe. 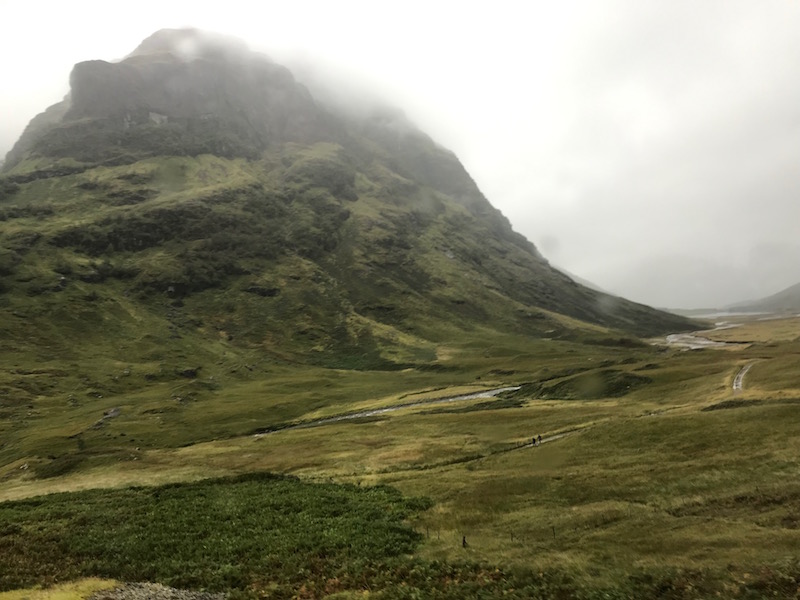 Sadly low cloud and mist hid the best of Glencoe today but even so passing through this wonderful part of Scotland is quite breathtaking and there were many cameras up against the windows capturing the scene. 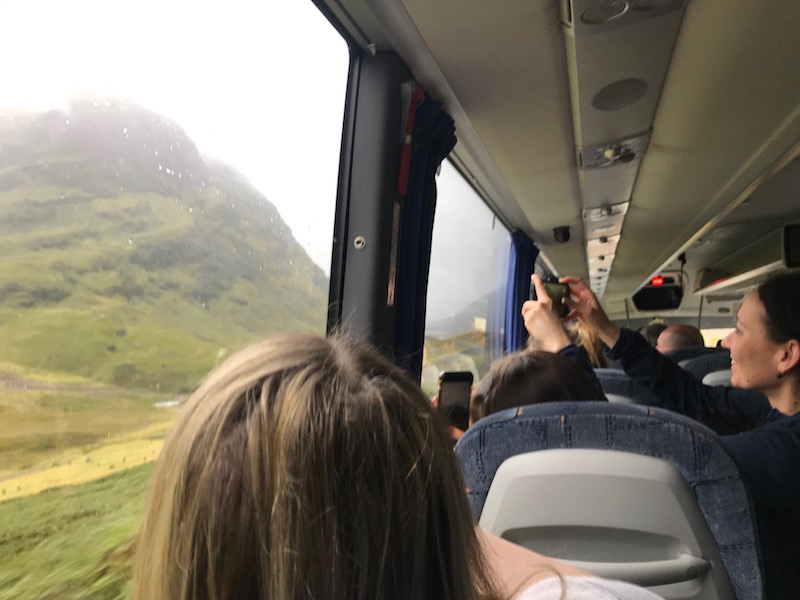 Our first passenger since leaving Glasgow boarded at Glencoe Ski Centre travelling the 19 minute ride to Glencoe itself where we also said goodbye to our three German friends who I’m sure felt got their money’s worth from their £76.50 trip (including the ride back to Glasgow in the afternoon too). 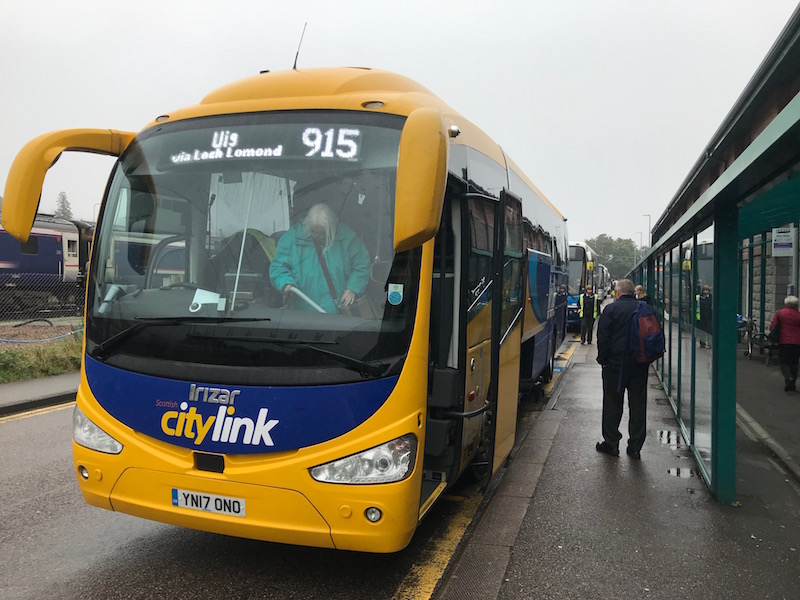 Fort William provides a welcome 45 minute break where we arrive at 13:20 with busy cafes in both the adjacent railway station and Morrisons but I’m back ready to board at 13:50 and our new driver has just opened the door for boarding. There’s a bit of a polite scrum at the bus stop between the fresh faced passengers and the old hands like me wanting to be reunited with the possessions we left on board to reserve our seats.

The next stretch of route to Kyle of Lochalsh brings more wonderful scenery as we pass five lochs on the nearside (Lochy, Garry, Loyne, Cluanie and Alsh) as well as the forests and mountains along The Road To The Isles (aka A87). 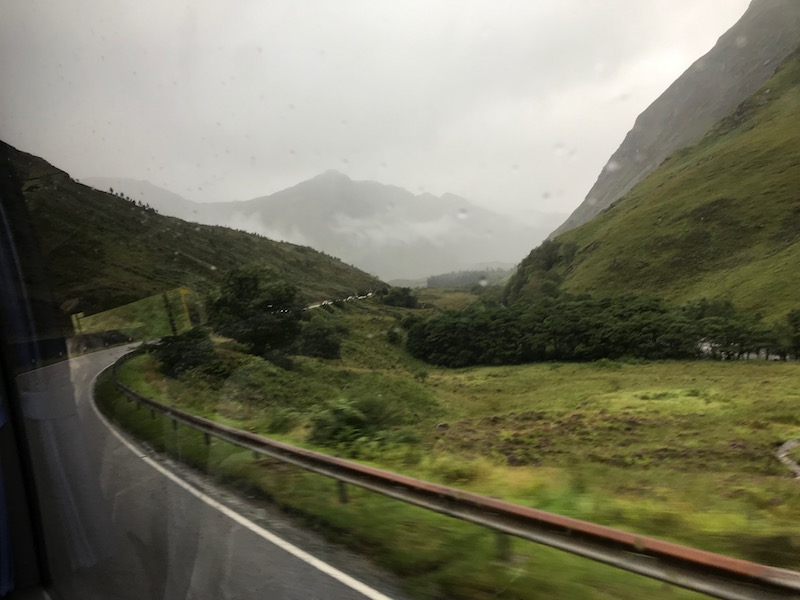 I reckon half the 28 on board from Fort William are my fellow travellers from Glasgow, and around half of those travelled on beyond Kyle of Lochalsh too with four alighting in Broadford, one in Sconsor and one in Sligachan; all on Skye. We picked up four in Kyle of Lochalsh and set down two and also set down five passengers in Dornie just before Kyle of Lochalsh. 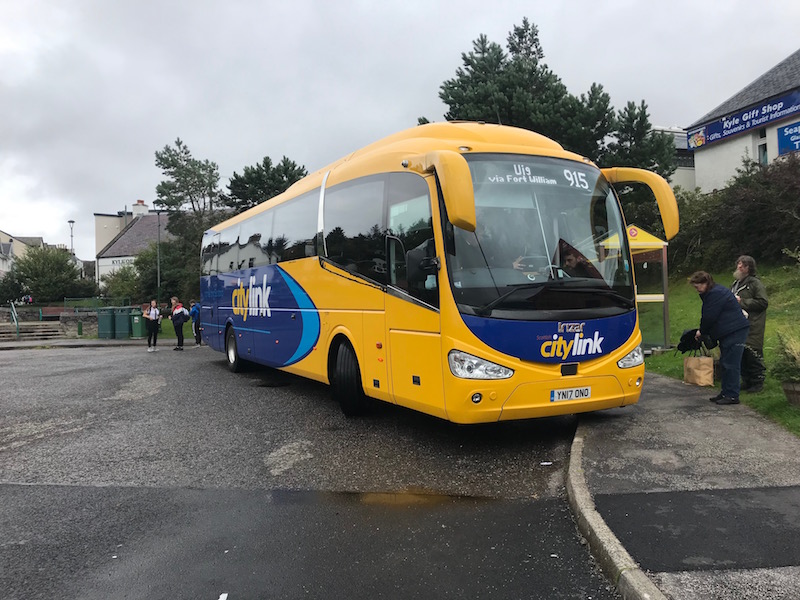 We ran about ten minutes behind schedule between Fort William and Kyle of Lochalsh which ate into our 23 minute break there but that still left enough time for a wander around to take in the splendid view of the Skye Bridge. 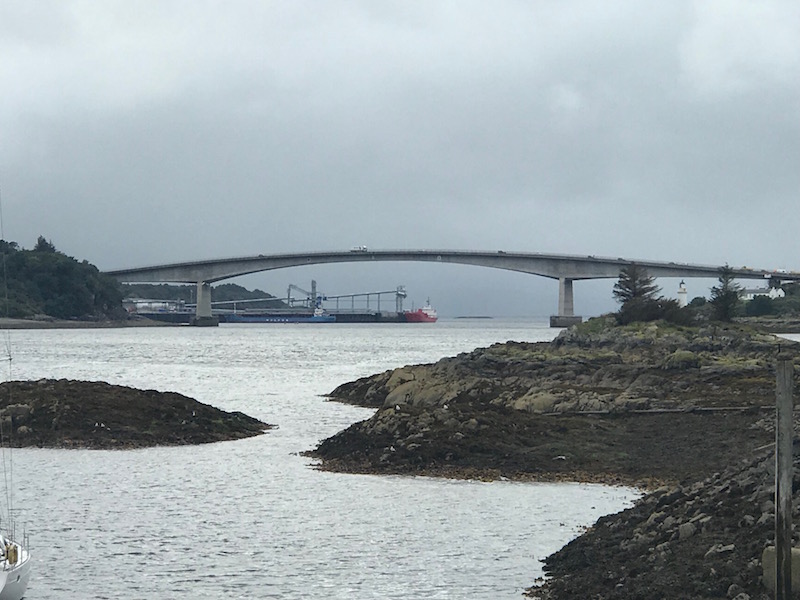 I always enjoy the amazing scenery on Skye and the hours journey from Kyle to Portree never disappoints even on a low cloud day. 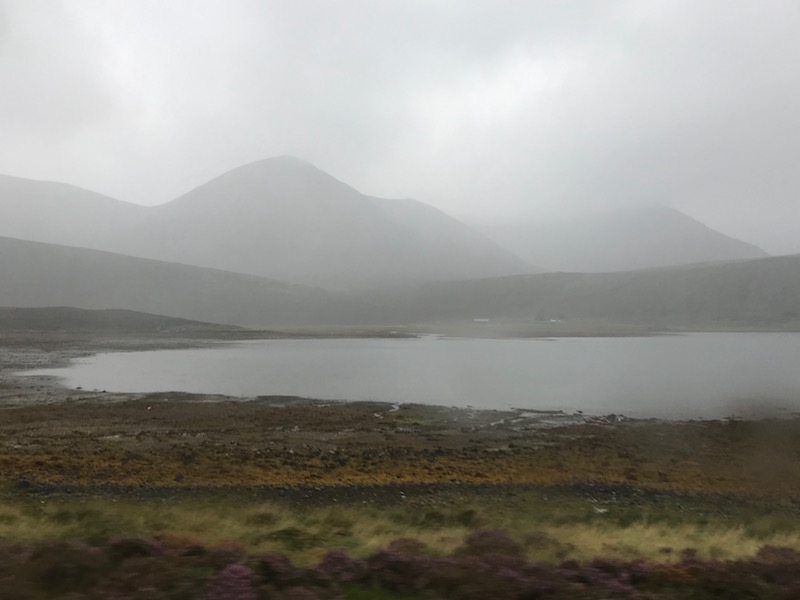 As I mentioned above I decided to leave the journey at Portree when we arrived at 17:15 rather than continue to Uig as I would have needed to wait there for some time for a Stagecoach route 57C back to Portree and the fine rain drizzle and low mist wasn’t very enticing. 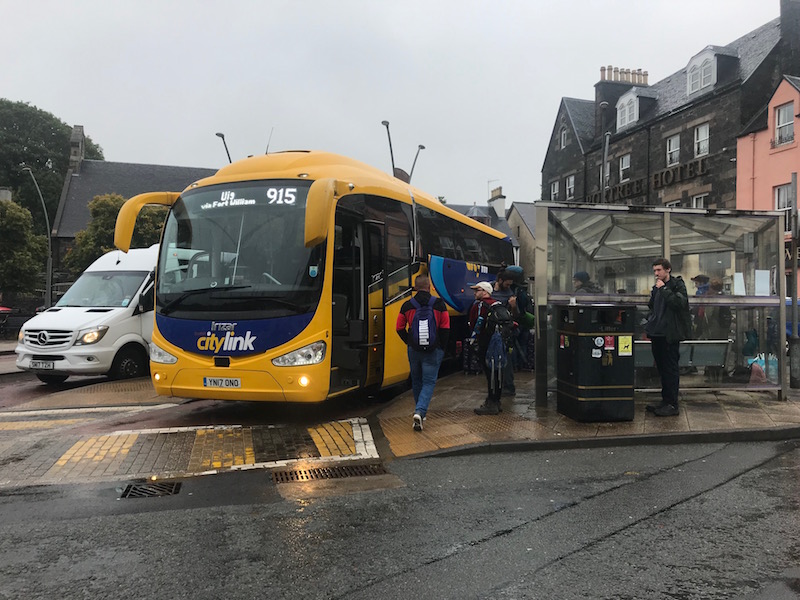 I’ll be taking the first 915 tomorrow morning from Portree at 08:30 for the half hour ride to Uig to connect with the ferry over to North Uist and a day in the Outer Hebrides.

At Portree I noticed three fellow passengers had travelled, like me, all the 7 hours 15 minutes way from Glasgow and they also alighted. Three continued on to Uig but they’d boarded at Fort William (2) and Kyle of Lochalsh (1). Three new passengers boarded at Portree for that final leg to Uig. 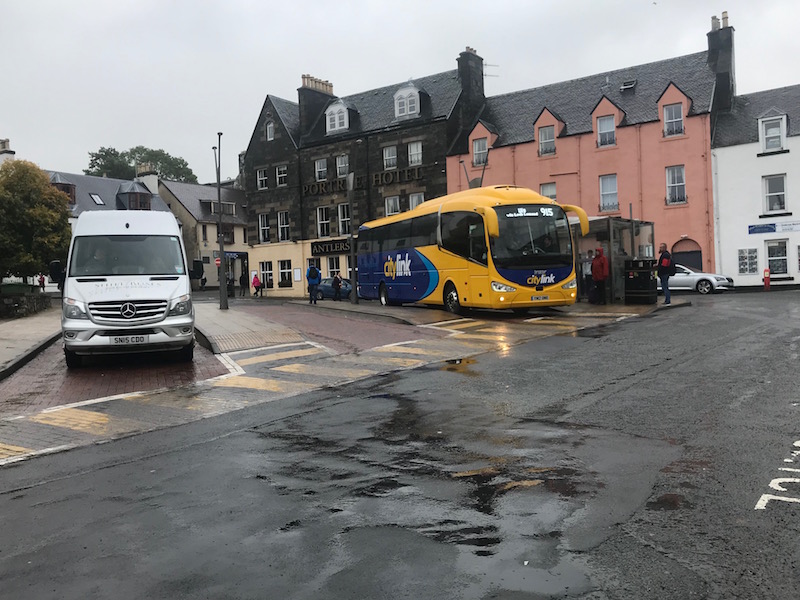 The Citylink 915 from Glasgow to Skye is a truly wonderful journey offering spectacular views all along the way. It’s well worth a ride.