Head to head bus competition broke out in Guildford last week. It won’t last; one operator will blink first – read on to find out which.

Long established family owned Safeguard Coaches runs circular routes 4/5 linking the city centre with Aldershot Road, Park Barn and the Royal Surrey County Hospital. Eight years ago they also ran part of route 3 serving Bellfields but back in 2010 Arriva, who also operated buses to both areas, took over the route to Bellfields exclusively leaving Park Barn exclusively to Safeguard. I’m not sure whether this arrangement was something of interest to the Competition Authorities at the time, but the local media certainly took an interest.

In the event, the “arrangement” is now history as Arriva have crashed back into Park Barn with a ten minute dedicated service (Route B) at the same time as revamping a longer cicular route (service 26/27) which also served the Royal Surrey County Hospital and an area called Stoughton. Now RSCH gets its own ten minute dedicated service (Route A) while Stoughton has its own fifteen minute frequency Route C.

The spark for Arriva’s Park Barn incursion came a few weeks ago when Stagecoach were given rights by the University of Surrey to run buses through the campus which had previously been served by Arriva on their now abandoned circular 26/27. The replacement route A now has to bypass the campus using what’s known as The Chase which also treads on the toes of Safeguard’s route 4/5.

Passengers have never had a better service with well over twelve buses an hour running direct between the city centre and the Royal Surrey County Hospital and up to twelve an hour between the city centre and Park Barn estate. Bus fares have also come plummeting down. One thing’s for sure, despite the Hospital being a busy attractor for passenger journeys and Park Barn being what we euphemistically call ‘good bus territory’, there’s definitely not enough passengers for the high frequencies now on offer.

I feel sorry for Safeguard. They’re rightly regarded as a quality independent operator (because they are); a winner of industry awards; and well respected by the local community and passengers who use the 4/5 route – which meets the needs of the area well. They’ve provided an excellent service in Guildford for ninety years and route 4/5 is a quality local route of which they should be proud.

I’ve got sympathy for Arriva. It must have been disheartening to be chucked out the University campus which I’m sure was lucrative to serve on its 26/27 circular and the incursion from Stagecoach in Stoughton must be unwelcome. I appreciate the attraction of making good the loss with an incursion into Park Barn, but it simply won’t work out for them.

Good for Stagecoach who must have been working closely with the University to gain exclusive access rights to the campus and introducing what looks like a decent mini network linking the University with its catchment areas. 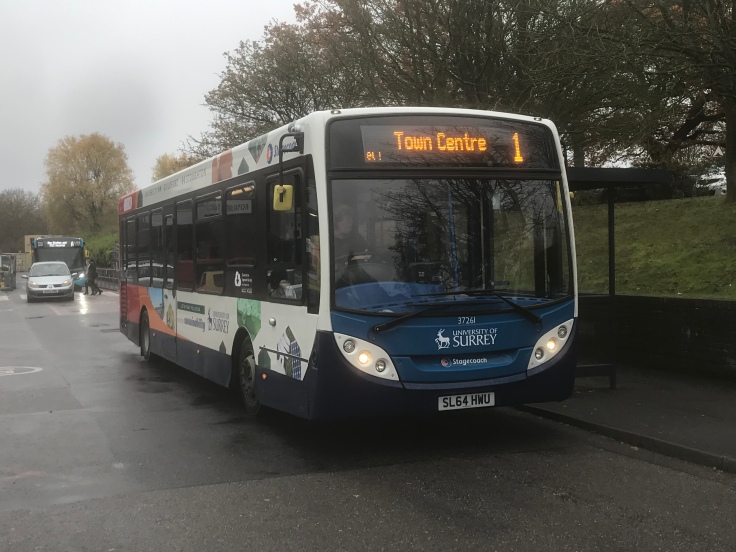 I’m impressed Surrey County Council have obviously worked hard to get all the bus stop flags and timetable cases updated with new route numbers and timetable displays even including large index displays and departure signs in Guildford bus station. Full marks to them for that and what a shame their comprehensive timetable book for Guildford only published and valid from 1 September (coinciding with the new Stagecoach routes 1/2) is now out of date. 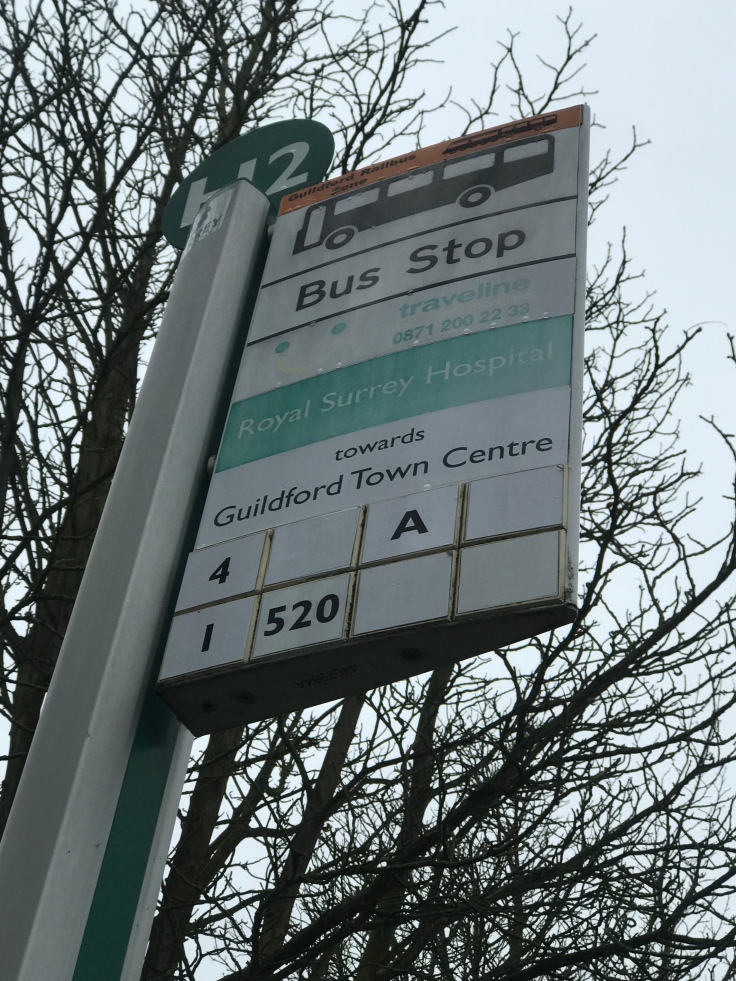 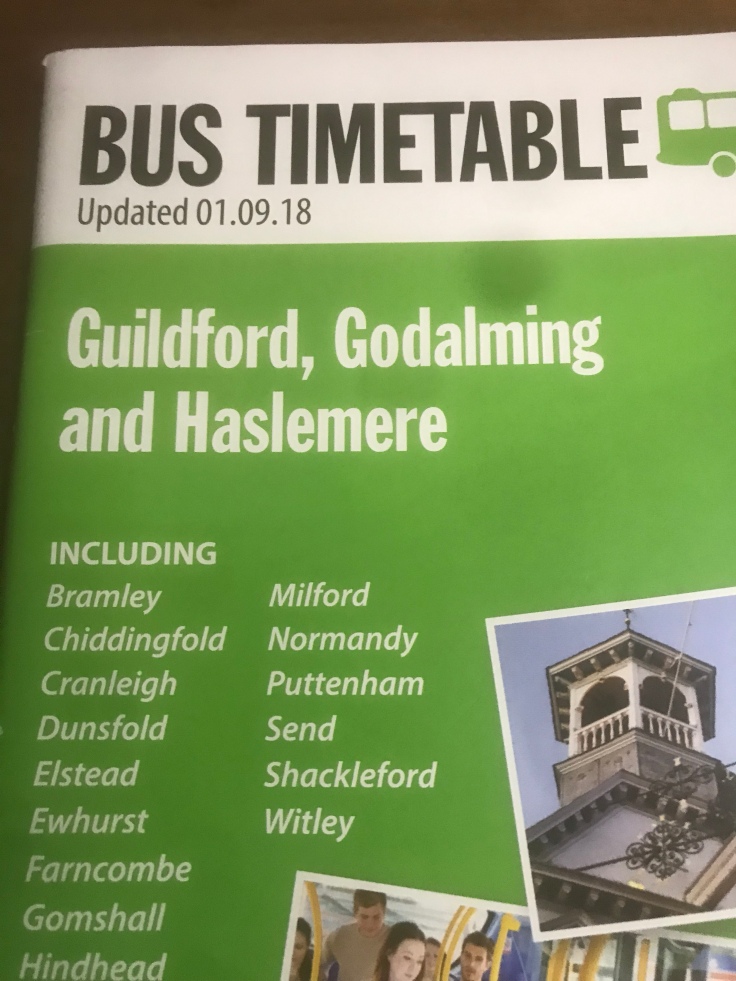 Arriva have produced an attractive timetable leaflet for the A, B, C routes available in their travel shop in the bus station but it was a shame there weren’t any available on the buses I travelled on today. I wonder if they’ve done a house-to-house in the affected areas to promote the new routes? 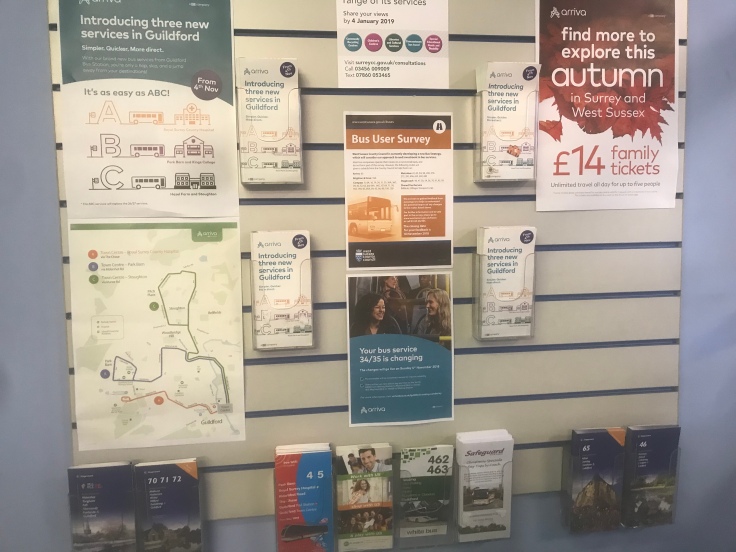 Safeguard also have an attractive full colour timetable leaflet for the 4/5 (commendably Arriva have copies on display in their Travel Shop) and a small additional leaflet promoting extra buses to and from the hospital and its cheaper fares.

As always in these things it’s attention to detail that’s important – not one of Arriva’s strengths. For example the internal cove panels in one of the buses I travelled on was promoting an out of date 0844 telephone number and season tickets for the full Guildford wide network rather than the new less-than-half-price tickets (bizarrely called ‘seasonal tickets’ – will they only last until the Spring?) available on routes A, B, C. 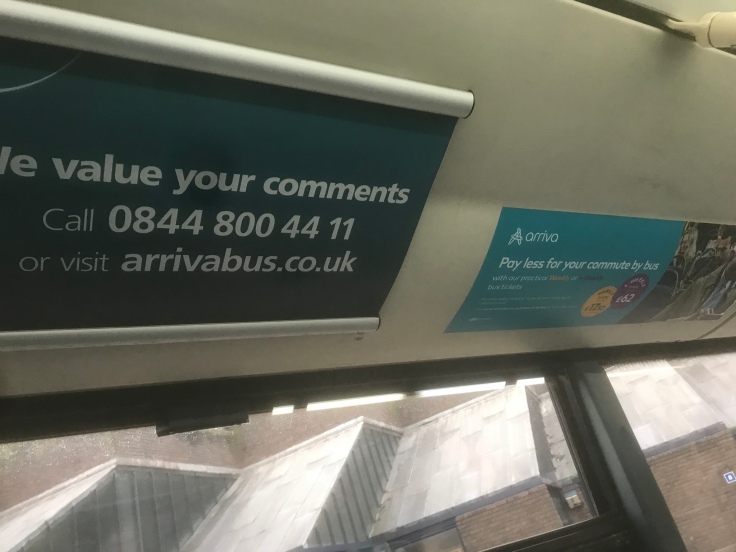 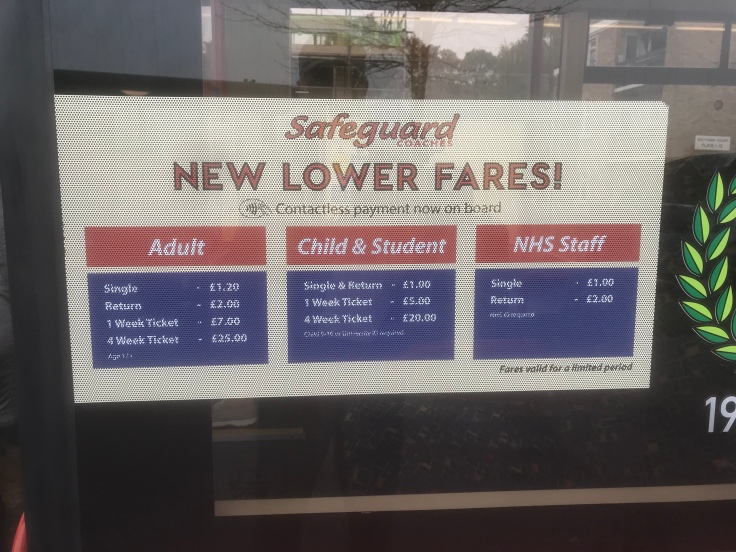 Safeguard on the other hand have high profile posters promoting their lower prices by the entrance of every bus – including bargain fares for NHS staff and their timetable and promotional leaflets are available on board buses. Also impressively their contactless payment option has a weekly and four-weekly cap built in. That’s quite an incentive to stick with one operator for your week’s or month’s travelling and as the incumbent operator with a long history of serving Park Barn and the Hospital, I’d be surprised if passengers desert them.

Certainly my observations today, which I appreciate are only at the end of week 2, indicate far too few passengers using Arriva’s new Route B and there’s certainly not enough potential to grow the market sufficiently to sustain both this and the 4/5. I can’t conceive Safeguard ever capitulating, they look financially sound enough to sustain this unwelcome onslaught. The only likely outcome is by next Spring Arriva will withdraw Route B (and probably slim down Route A) as it wont be meeting the profit targets expected at Sunderland HQ.

Routes A and C look like a good idea – it simplifies what was a rather convoluted 26/27 circular but if I’d been Arriva I’d have also redeployed resources from the 26/27 (and used the transfer in of more modern single deck buses from elsewhere) to boost and protect the service to Bellfields – providing a more attractive offer than double decks lumbering round every twenty minutes – it wasn’t that long ago the great hope for Bellfields was the ridiculous Mercedes Sprinter minibuses, but that ended in disaster as the buses were totally unsuitable; I can’t help thinking double deckers are just as unsuitable to the other capacity extreme and I’d be very wary of a locally based family owned highly respected operator reinventing history and returning to that pre 2010 arrangement of serving Bellfields!

One to watch with interest in the coming months.

4 thoughts on “Will competition safeguard buses in Guildford?”