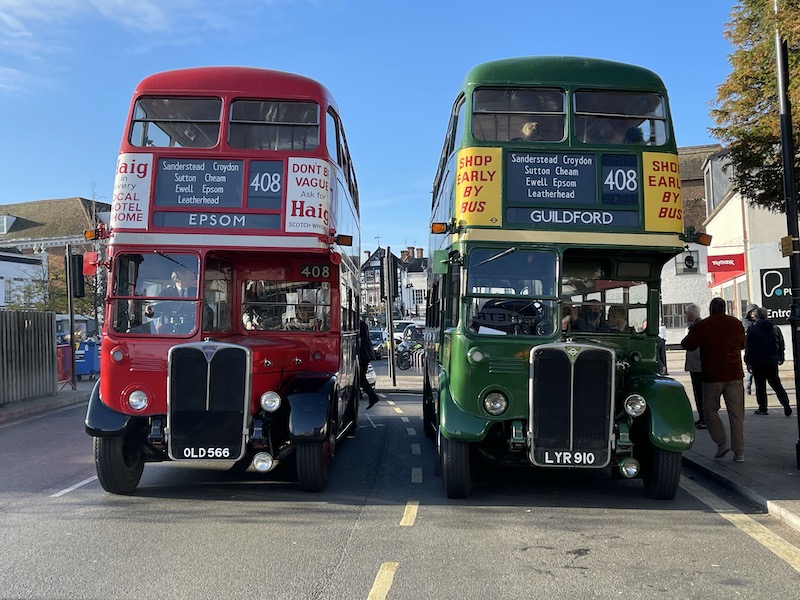 We all have a favourite bus route – usually one associated with childhood memories often from the days of taking us to and from school.

Peter Osborn’s favourite must be the former London Country route 408 which at one time ran from Guildford via Leatherhead and Epsom to West Croydon before continuing south eastwards to Warlingham and Chelsham.

Not only has Peter recently published a book about the history of the route entitled ‘Surrey’s Spring Line’, but on Tuesday he organised a special running day using his own preserved RT 4779 offering free rides to all comers to mark the exact centenary date of the route’s introduction on 16th November 1921.

It wasn’t numbered 408 at that time, the ‘Bassom’ system of numbering bus routes in the Metropolitan Police area was introduced three years later in 1924, so East Surrey Traction Co Ltd (the forerunner in the south west to London Transport’s country area operations formed in 1933) christened its fledgling Guildford to Epsom bus service as route S6B – an associate of route S6 which ran from Epsom to Redhill.

Frequency was initially two hourly and it took 100 minutes end to end but in the following April the route was extended north east via Ewell and Cheam to Sutton and increased to hourly while in June was renumbered S8 (hence ultimately becoming 408) and in March 1923 was further extended north eastwards to West Croydon.

There’s a fascinating story about how buses on the 408 inter-worked with the 403 and 415 in the mid 1930s to provide a cross-Croydon service and I recommend buying Peter’s book for an easy to understand explanation of what was a very complicated arrangement. The upshot was route 408 got extended again beyond West Croydon via Warlingham and Chelsham to Farleigh as well as some journeys to Warlingham Park Hospital in 1937.

By the early 1960s the eastern terminus had become Chelsham with a lengthy 2 hours 16 minutes journey time from Guildford but in June 1972 the route was cut back to West Croydon when converted to driver only operation.

The route became a limited stop ‘408 Express’ in 1980 with 20 minutes lobbed off the running time bringing it down to 1 hour 36 minutes although in his book Peter wryly observed this saving was “probably reflecting the decline in patronage more than time gained by missing stops”. It didn’t prove a success possibly not helped by replacing the Atlanteans with Leyland Nationals.

All this came to an end in June 1999 when the route south of Leatherhead (to Guildford) was withdrawn and in January 2000 was cut east of Sutton (to Croydon), both being replaced by other routes, while the western end of the route saw a handful of journeys extended to Cobham via Oxshott.

In July 2003 the northern terminus was cut back from Sutton to Epsom and by now the 408 had sadly become a minnow compared to its trunk route heritage. Some journeys from Epsom were diverted to run to Effingham rather than Cobham in 2012 and that continues to be the case today with the route operated by Falcon Coaches.

Meanwhile Peter explains in his book the current services which you can catch to make the same Guildford to West Croydon journey which for so many years was possible simply by catching the 408. They include the 478/479, the current shortened 408, Metrobus 21, TfL routes 470, X26, 407 and 410.

But on Tuesday the 408 was back again to its original route for one day only thanks to Peter and his RT together with Simon and his resplendent green liveried RT 3491 which once again recreated the route in its entirety between Guildford and West Croydon. Many route 408 fans took the opportunity to accept the generous offer of a free ride for a rounder from Epsom down to Guildford then right through to West Croydon and back to Epsom.

This RT duo were also joined by preserved green liveried RT 3148 making for a convoy of three RTs for the journey from Epsom to Guildford.

The team arranged for some photo stops along the route which were enthusiastically taken up by everyone on board, needing to show some patience to get that perfect shot too on the busy roads the 408 used to ply.

At Guildford a quick trip to Arriva’s soon to close bus garage in Leas Road, formerly home to London Transport Country Buses (as well as London Country) provided a fitting tribute to this long standing garage which dates back to 1932.

The run from Guildford to West Croydon was achieved in about 85 minutes which was good going, comparing well with the 96 minutes taken by 408 Express journeys, and made for a very enjoyable nostalgic morning.

On arrival in West Croydon bus station it was good to see both RTs attracting attention from both staff and passengers using TfL’s extensive network of bus routes at this busy location.

Many thanks to Peter for organising such a splendid tribute marking one hundred years since route 408 first began as the S6B.

Copies of Peter’s splendid book were on sale on the buses and is recommended reading for anyone interested in bus routes in this part of Surrey and south west London.

The book is also selling fast from other outlets but it is still available online through this link. Buy a copy before you miss out. It’s a bargain at £10.

16 thoughts on “Centenary celebrations on the 408”