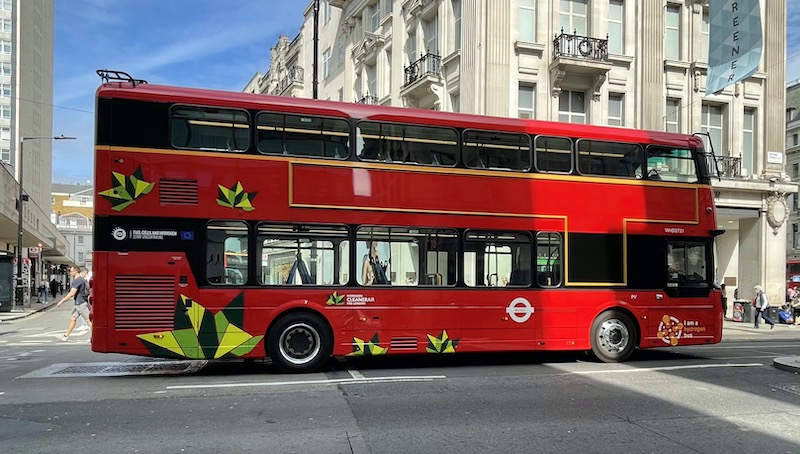 Sooner or later the bubble had to burst. For years London’s buses have been hailed as an exemplar for how bus networks should be across the country. It’s a favourite bleat of MPs used to flotillas of red buses passing up and down Whitehall as they attend their Westminster offices that if only bus services in the provincial towns, cities and even rural areas they represent could be as frequent and cheap as in London then buses would be sorted.

The recently published Bus Back Better, so called National Bus Strategy, from the DfT (and largely written by Andrew Gilligan, Number 10’s transport bigwig) commented glowingly about needing “London style this” and “London style that” buses, tickets, frequencies and a whole lot more replicated all over the country and everything would be alright. Prime Minister Johnson opined in his preface to the document “last year, we announced £3bn of new funding to level up buses across England towards London standards. Just as we already have in the capital, we want main road services in cities and towns to run so often that you don’t need a timetable.”

Except we know it isn’t like that. Never let the facts get in the way of a good three word soundbite. London’s buses have been haemorrhaging passengers consistently for years as journeys have slowed to not much better than a crawl in a number of places while elsewhere you’ll find yourself delayed on board because the “bus is being held to regulate the service”. Routes have been shortened meaning more changes have become necessary to reach a destination and information about where routes go is now totally lacking.

On the one hand Number 10 extolls the virtues of London’s buses, but on the other talks about TfL’s “financial black hole” refusing to agree a long term financial settlement leaving TfL to lurch from one crunch deadline to the next not knowing how much the next funding pay cheque will be, or what demands will be placed on its receipt.

Today, Saturday, sees the start of more widespread reductions in London’s bus provision across Zone 1. It’s the second such swathe of cuts in as many years. And I fancy it won’t be the last as the decline and resultant cuts have all the makings of a downward spiral.

Once you start cutting frequencies on the busiest ‘turn-up-and-go’ routes to better match reduced demand, more passengers notice their waiting times have increased and start thinking about alternative travel options resulting in more people deserting the bus leading to justification for further cuts.

That’s exactly what happened in many towns and cities in the 1970s and early 1980s in the lead up to deregulation, and always conveniently overlooked by proponents of regulation. Buses were withdrawn from those frequent routes that had the most potential to grow and attract more passengers to prop up less remunerative services to minimise the call on public funding. The same thing is happening now in London. Tens of PVR are being taken out of the network today (my best guess without analysing the schedules is between 60 and 70), while out in the suburbs low frequency routes are being introduced or extended where there’s never been a bus – another change from today is a newly extended route 324 beyond Stanmore to the Centennial Business Park (famous for being the site of London Transport’s Aldenham Works).

Notwithstanding the cuts being made today, there’s more to come. London Travelwatch successfully lobbied for the Government imposed “review of bus travel demand” as part of the last short term funding settlement to be postponed from July until the Autumn to allow more time for a return to pre-Covid travel patterns. Once that’s taken place, there can only be one expected outcome. More frequency reductions.

While some of the reductions being introduced today mean buses will still run frequently, there’s no doubt the change from yesterday’s timetables, will make an impact.

Route 7, recently converted to Hydrogen powered buses amidst much fanfare reduces from every 8 minutes to every 12 minutes meaning it’ll no longer need 18 of those expensive buses, but probably more like 12 for the reduced service; a 33% reduction.

The two former Red Arrow routes, 507 and 521 have their frequencies halved; every 3-4 minutes on the 507 becomes every 7.5 minutes, and London’s most frequent bus route, the 521, reduces from every 2-3 minutes to every 5 minutes. The saving here must be getting on for 20 buses from the 58 deployed until yesterday.

In a fortnight route 11, often thought of as London’s best and cheapest sightseeing tour (running from Fulham to Liverpool Street) reduces from every 10 minutes to every 12 minutes which is almost bordering on the not really a turn-up-and-go-service any more.

Another change in two weeks time is to busy route 29 (Trafalgar Square to Wood Green) which reduces from every 4 minutes to every 5-6 minutes. In this case its frequency increased when articulated buses were withdrawn so is probably more reverting back to old times.

Most of the revised frequencies quoted above are justified by the reduced number of passengers travelling. That’s for sure. We are certainly well past the heyday of peak bus travel demand in central London. But, the problem with ten or twelve minute frequencies on a busy congested road network as applies in central London is once you get delays to one bus, it doesn’t take long for things to go awry and buses soon bunch with significant gaps between buses building up, making for an even greater unsatisfactory experience of bus travel.

I know London is also hailed up as a great place for bus priority measures to help buses through the worst of the traffic delays, but my experience is recent schemes to create better arrangements for cyclists and pedestrians have in many cases undone the previous free flowing arrangements for buses.

We’ve all experienced the dreaded “the destination of this bus has changed” announcement just before you’re turfed off to fend for yourself as the driver’s told by control to turn short to get back on time, and never mind the inconvenience for passengers abandoned at the roadside.

Two other changes from today are the withdrawal of two more routes from Oxford Street as that road continues to see a reduction in the number of buses running along it. Route 113 is cut back from the north to terminate at Marble Arch rather than continue to Oxford Circus (as well as the aforementioned frequency reduction from every 7.5 to every 8-9 minutes), while route 159 is cut back from the south to terminate at Oxford Circus, instead of continuing to Marble Arch.

Again, these changes make sense when you observe such small numbers travelling towards the terminus, but it’s the thin end of a large wedge, when you use that argument to cut buses short of their terminus.

The justication for doing so can just continue.

And that’s the problem with “London style” bus cuts.