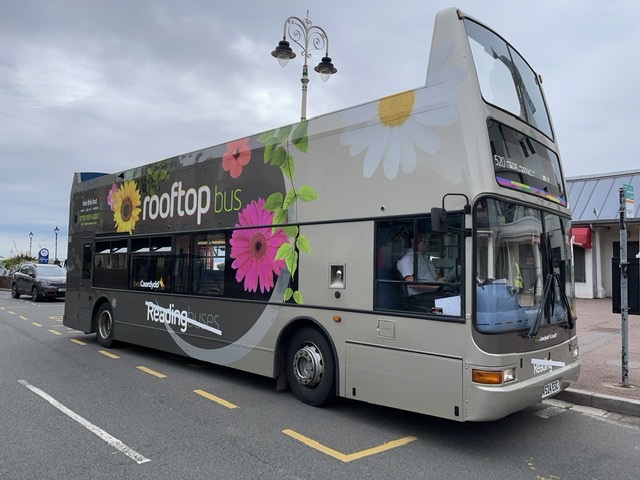 It might not have the scenic delight served up by the Exmoor Coaster or Dartmoor Explorer but the new open-top bus service introduced by Cardiff Bus this week has the potential to prove popular with both residents and visitors fancying a novel bus ride to Cardiff Bay and Penarth seafront.

Open-top services are not usually on the agenda at Cardiff Bus so this fledgling innovation has entailed borrowing a bus from colleagues at Reading Buses with its ‘rooftop bus’ branding.

The Cardiff operation runs daily until 30 August with hourly journeys between 10:25 and 18:20 so there should be time to give the bus its regular servicing before or after service when needed.

The city centre pick up and drop off is in St Mary Street close to Cardiff Central railway station and the route takes in the regenerated Cardiff Bay area including Wales Millennium Centre and Mermaid Quay before continuing to Penarth reaching the southern terminus at the Pier 29 minutes after leaving Cardiff.

The views around the Bay Area are eye-catching but the rest of the journey is through suburbia until reaching Penarth Esplanade.

A loop working from there brings the bus back to the city centre in 26 minutes giving a five minute layover back in Cardiff.

The city centre stop is used by other bus routes so there’s not much room to layover but the journey I caught arrived in Penarth in good time enabling the bus to stand by the Pier for a while when I saw passers by taking a look and asking the driver for information.

That’s always a key aspect of a successful open-top operation – having a bus on stand to attract passers by – as is plenty of attractive publicity leaflets and it was good to see the bus well equipped with a great bilingual brochure.

This ‘summer days out’ leaflet contains details of services to Barry Island as well as Cardiff Bay and other places of interest in Cardiff.

It’s also great to see cross promotion of routes operated by Stagecoach and Easyway to four tourist destinations outside the city.

All in all a great publication although I’d have liked to see a little map showing the open-top bus route.

Another key ingredient for successful open-top operation is enthusiastic drivers and my experience yesterday morning travelling with Simon and his mentor Adrian saw two excellent ambassadors in action meaning the service is in great hands.

I couldn’t have received a friendlier and warmer welcome on board.

Simon sold me a day ticket at £4 and was keen to ensure I knew I could hop on and off as much as I liked all day on the open-top and all Cardiff’s buses giving good value.

The bus is well trimmed and has an interesting arrangement of a pair of reverse facing seats at the very front on the nearside, but this didn’t spoil my forward view as sadly I was the only passenger.

I can see it might be fun for a group of four travelling together to sit at the front but otherwise a bit odd.

Bus stops at both terminal points by Penarth Pier …

… and in St Mary Street Cardiff had timetables and information posted although the latter also had a rather wonky out of date poster alongside.

But impressively within minutes of me letting the Commercial Director know of this misdemeanour by a tweeted DM I received a reply from Gareth confirming he was on to it straightaway and contacting someone to pass by and sort it. That’s the kind of responsive service I like to see to feedback and makes it all the more worthwhile to pass little things like this on, knowing it’s appreciated- if only other operators (no names this time) would act so fast, or even act.

It’s good to see an initiative like this snd I wish it success. I’m sure once the schools break up it will prove a hit with families during what will hopefully be a summer of good weather.

Meanwhile over in Swansea I had time on my travels yesterday to also take a look at First Cymru’s recently introduced open-top service from the city centre down the wonderful Mumbles to Bracelet Bay.

I’ve fond memories when I worked for a few years between 1979 snd 1982 with South Wales Transport based in Swansea’s Quadrant Bus Station (the first version) of running open tops in the summer to supplement the regular routes 1, 2 and 3 to Limeslade, as well as Caswell Bay and Langland Bay so I know the route well.

The route was revived by First Cymru a few years ago and it’s great to see it back again as Service 1 resurrecting the old Limeslade route number.

It’s a two bus operated hourly operation with quite an early start running between 08:15 and 19:15 with the Sunday timetable starting an hour later and finishing an hour earlier.

Journey time to Bracelet Bay is 46 minutes which includes operating via Swansea Marina with the return journey not doing so and taking a shorter 35 minutes. Only four minutes layover is included at Bracelet Bay.

The bus sports an attractive livery but sadly there’s no publicity leaflet. I enquired at the Quadrant Bus Station Travel Office window about one but was just referred by to a poster on the other side of the glass! Not very helpful or inspiring.

It’s going to rely on the presence of the bus to raise awareness therefore but at least one of the two buses parks up on the far side of the bus station for 35 minutes each hour and might catch people’s eye.

Again, I hope it’s a success but I’m sorry not to see a leaflet for it like Cardiff’s stunner, albeit map less stunner!

9 thoughts on “Rooftop bus riding in Cardiff (not Reading)”