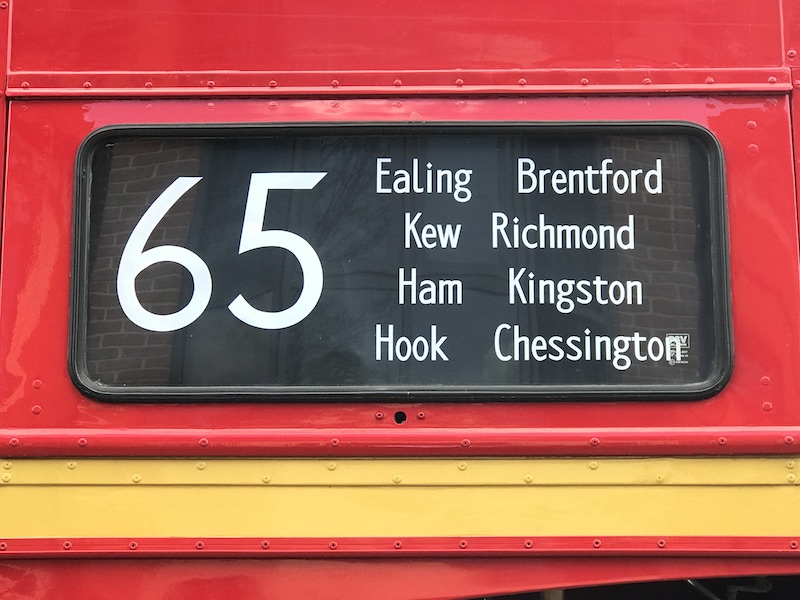 A big thank you to the London Bus Museum team for organising today’s ‘Running Day’ on route 65 between Ealing, Leatherhead and Dorking. It was great fun and made up for missing the usual Spring event held at the Weybridge based museum.

In many ways it was even better to see so many preserved buses associated with London out on the road carrying passengers – what they were always designed to do – rather than static at the museum. And it’s always lovely to see members of the public stop to take a look as familiar old buses pass by, and even youngsters taking photographs on their mobile phones.

Routemasters of all types as well as RTs, RFs and a smattering of more modern preserved buses provided a free service along the route between Ealing and Leatherhead with some journeys also running between the London boundary south of Chessington at Maldon Rushett and Dorking mirroring TfL route 465.

In addition to the 30 or so buses running the timetabled services open to the public to travel on, owners of a further couple of dozen or so preserved vehicles took part in a road run along the route for the benefit of the many photographers along the way.

Route 65 has been associated with Ealing since its introduction in 1934, originally terminating at the suburb’s Argyle Road stand. I remember my time at London Transport’s Chiswick Training School in the early 1970s when the route was used as the test bed to teach aspiring bus conductors how to read a fare chart and issue tickets from the infamous Gibson ticket machine on dummy journeys along the route. We even went out along part of the route in an RT issuing tickets to fellow classmates in the training school, and all the time trying to stop passengers boarding as we stopped at the stops!

Route 65’s Leatherhead terminus was alongside the Country Bus garage just to the south of the town centre, where today’s Running Day buses turned round, except the garage is sadly long gone to make way for housing.

The route was cut back from Leatherhead to Chessington Zoo in November 1968 coinciding with the Ealing flat fare ‘satellite’ scheme when the unsuitable Merlin buses were introduced on three routes in the Greenford and Ealing area. 1982 saw the northern terminus cut back to Ealing Broadway Station and five years later in 1987 the southern terminus was cut back to Kingston which it still is today.

Route 465 began in June 1991 between Kingston and Horsham as a replacement for Green Line route 714 over that section but was cut back to Dorking in 1997. The northern terminus flirted with Teddington and Fulwell for a time and some journeys were diverted to Effingham instead of Dorking but Kingston and Dorking are the mainstay termini which continue today.

Here’s a small selection of photos showing some of the many buses out on the road today.

Ands finally, here’s what you can find on routes 65 and 465 on a normal Sunday…

I’ll leave you to decide which vehicles you prefer to ride in.

It was great to see so many different buses in action today and I do hope RATP owned RML 880 soon got going again as well as a couple of other mechanical casualties seen along the route.

Many thanks once again to the organisers for putting on today’s show.