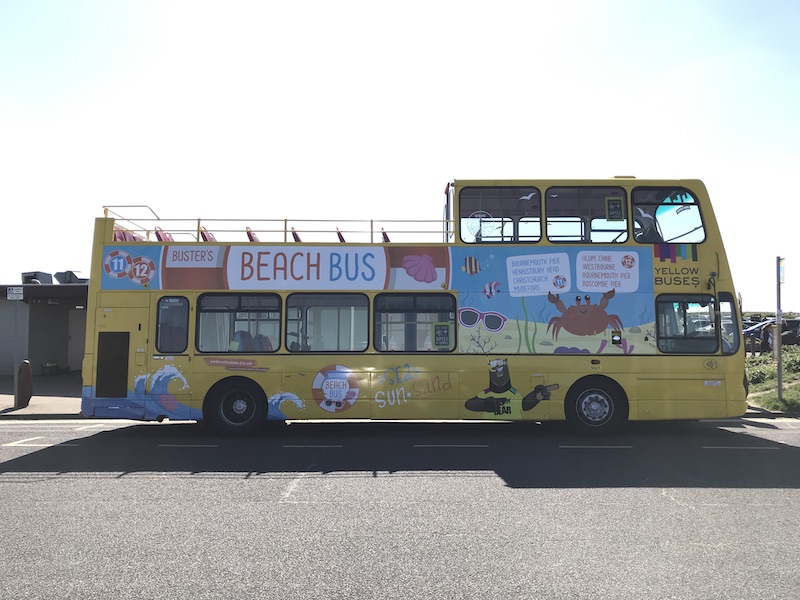 It’s good to see Bournemouth’s Yellow Buses running open-top bus services again after a Covid enforced absence last year. My friend Ray Stenning and I took a trip to the lovely south coast resort today to have a ride.

There are two routes this year, numbered 11 and 12. The former operates between Bournemouth Pier, Boscombe Pier and Hengistbury Head before continuing to Christchurch, around the Harbour to Somerford and terminating in Mudeford near the Quay. The latter runs from Alum Chine and Bournemouth Pier then parallels the 11 to Boscombe Pier and for the next few weeks continues to Hengistbury Head. Both routes began the season yesterday with the 11 a weekend, bank holiday and school holiday only affair operating two-hourly and the 12 operating hourly seven days a week.

Yellow Buses have continued their Buster’s Beach Bus banding first launched in 2019 adorning the buses with images all over the bodywork as well as on bus stop flags all along the route and timetable displays.

The company are using five buses obtained through Ensign which are converted ex London Volvo B7TL Wrightbus Gemini Eclipse buses similar to those used on East Yorkshire’s Beachcomber in Scarborough. There are also two older open-tops in the fleet to act as back ups.

We caught the first journey from Bournemouth Pier through to Mudeford at 10:40 and it was encouraging to see passengers boarding throughout the journey as far as Boscombe making for a very respectable load with only a handful being dedicated ‘first day riders’ and others being a good cross section of families, couples and oldies.

Even more impressive was only two passengers got off at Hengistbury Head with everyone else continuing on to Mudeford to enjoy the extended route through Tuckton, Christchurch and Somerford.

Journey time is around an hour from Bournemouth to Mudeford which on a breezy day is about the limit for a relaxing and enjoyable open top ride before needing a rest.

At Mudeford we walked to the end of the Quay and took the passenger ferry for the short trip back south across the mouth of Christchurch Harbour to Mudeford Spit.

The ferry provides a frequent shuttle charging a cash only fare of £2 and only takes a few minutes but makes for a very pleasant trip across the harbour.

After landing (docking?) at Mudeford Spit it’s a very pleasant stroll southwards past some amazing beach huts (it’s said they’re the most expensive and luxurious beach huts you’ll find anywhere in the UK – many even have two floors and are ‘double fronted’!) then either continuing westwards along the beach or the upper cliff top to the road end at Hengistbury Head where there’s a cafe and toilets and you meet up with the bus route again. There’s also a land train through the nature reserve if you don’t fancy the walk.

It’s a great circular route that takes around two and a half hours from Bournemouth; longer if enjoying a picnic stop or refreshments at either or both Mudeford and or Hengistbury Head as we did. Simon Newport, commercial director at Yellow Buses, told me they’re hoping to arrange an integrated ticket to encourage people to take the bus and ferry on a circular trip, which I mentioned in my recent ’round-up’ blog series.

The eastern end of route 11 includes a detour to serve Somerford Sainsbury’s which seemed a bit of an odd destination to include especially as it means negotiating a busy roundabout on the A35 twice, although it does provide a connection with Yellow Buses’s route 1a.

Somerford Sainsbury’s aside, you get some really great coastal views from the bus on a clear day (such as today) along the route, including the Needles on the Isle of Wight, Sandbanks Beach in Poole and Old Harry Rocks at Studland. The route westwards from Bournemouth to Alum Chine on route 12 is also worth a ride, although we didn’t include it in our itinerary today.

Yellow Buses plan to increase the frequency of route 11 to hourly as well as operating it daily from the late May bank holiday when the 12 also increases to half hourly running between Alum Chine and Boscombe Pier. Further frequency enhancements are in line for the summer school holidays.

With the boom in people taking UK based holidays this year there’s no doubt bus routes aimed at the leisure market such as these will do well offering a great way to savour Bournemouth and Boscombe’s glorious seafront as well as enjoying Hengistbury Head and Mudeford on a quirky circular trip including the ferry.

It’s well recommended if you’re down in Bournemouth in the coming weeks. An “Adventure Awaits“.

12 thoughts on “Yellow Buses open-tops are back”