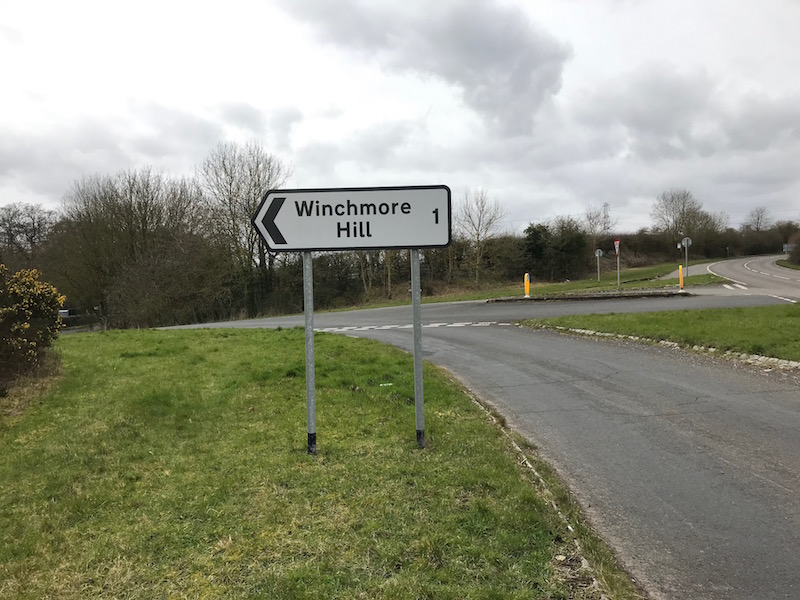 I’ve always had a fascination with maps including discovering duplicates of place names. None more so than my north London birthplace: Winchmore Hill in London’s N21 postal district.

This particular place name pair has held an obsession ever since I covered my study bedroom wall at University with Ordnance Survey maps stretching right across south east England (yes, I know it sounds a weird wall covering, but don’t judge). This showed up the fascinating fact that Winchmore Hill N21 is on exactly the same line of latitude as its namesake village, Winchmore Hill in Buckinghamshire, south of Amersham. Coincidence or a clever piece of lining up by early cartographers many generations ago? 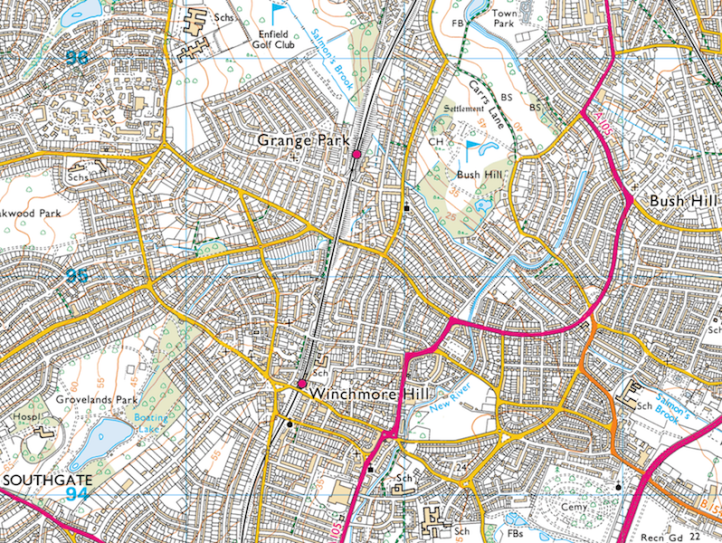 Yesterday, I finally got round to making a journey between the OS map ‘Northing coordinate 950 sharing Winchmore Hills’, and in another spine tingling coincidence discovered it takes precisely two hours (to the second) to travel between them by public transport.

I began my adventure in the familiar N21 version. It’s a lovely part of north London, especially the well-to-do area around The Green, the heart of the original ‘village’.

The station can be found here and one of the most exclusive and expensive roads in the suburbs (you’re talking £3-4 million) – Broad Walk – so posh it used to have pink coloured pavements.

You’re reminded you’re in the London Borough of Enfield as soon as you turn right out of the station. 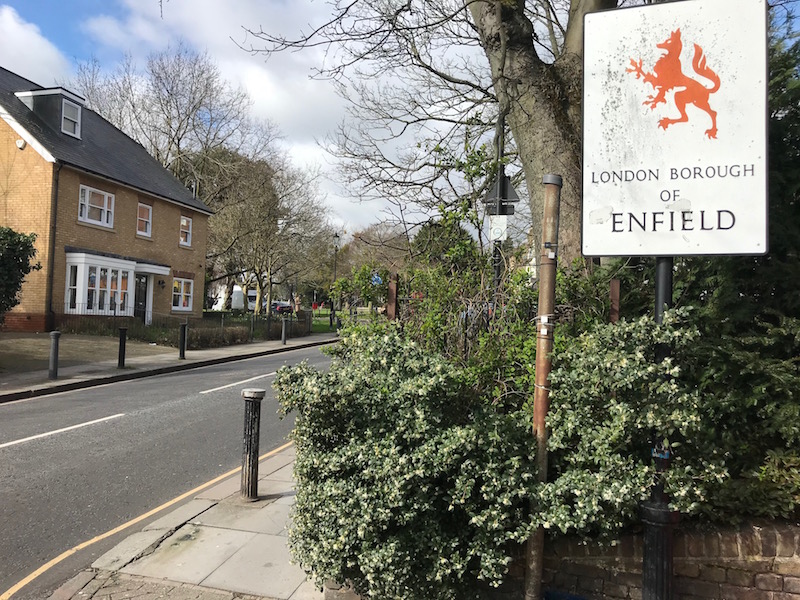 I was born and enjoyed my pre-teen years in the not-quite-so-well-to-do area of N21 in Firs Lane lying south of Green Lanes (as opposed to The Green to the north) which I’m delighted to see will shortly enjoy a bus route for the very first time with TfL’s proposed new route 456 (a nice neat number sequence to boot too), hopefully commencing later this year between Crews Hill and North Middlesex Hospital.

At the top of Farm Road and Fords Grove (where I see the old single storey public conveniences have sprouted two additional floors) which link Firs Lane with Green Lanes is The Broadway shopping area; this had all the familiar retail names in my 1950s and 1960s era (J Sainsbury’s with its self-service individual counters and back of shop cash desk to pay, Boots, MacFisheries, United Dairies) as well as busy trolleybus and subsequent bus routes north to Enfield (629/269) and south to Palmers Green and Wood Green and beyond to Woodford (675/275), Moorgate (641/141) and Tottenham Court Road (629/269) and the Green Line 715 from Hertford to Guildford which had its own exclusive bus stops (not on the Broadway though – perhaps not exclusive enough for Green Line clientele).

There was also the 244 (and 125 on a Sunday) which terminated at the bottom of Station Road by a monstrosity of a building used by the Inland Revenue which had replaced an old Capitol cinema. I was pleased to see it has recently been demolished and I guess will be replaced by more sought after flats.

Taking a walk back up Station Road to the Green, the shops here continue to exude a more upmarket feel but I did wonder whether Mistress Appleby was a bit risqué for The Green …

…. but it turned out to be a jewellers although not open on Mondays; well that’s what the empty shop window implied; but I’m now wondering whether alternative activity lies beyond the locked door! 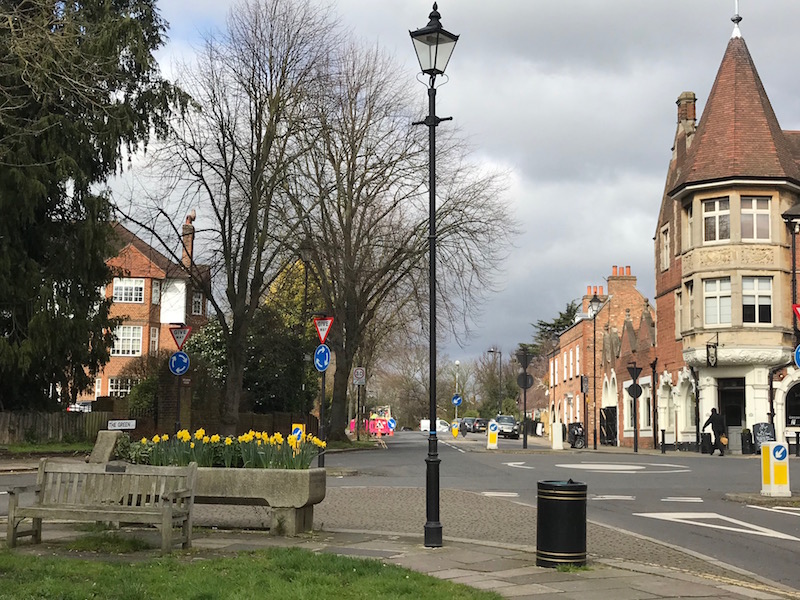 The architecture of the Kings Head pub still belies its origins as the fire station with arched exits from where horse drawn fire engines raced out in its heyday.

Another local landmark in Station Road was the Royal Mail sorting office.

I couldn’t work out what it’s used for now but nice to see the Postmens Office is still appropriately marked.

Royal Mail moved across the road some years ago now using a rather characterless building built before accessibility was an issue with steps leading up to the first floor area for customers picking up parcels.

In September 1972 The Green received a bus route for the first time with London Transport’s first foray into minibus routes when the W9 began running between Enfield and Southgate, but no bus stops have ever been erected and it’s a strictly hail and ride service in these parts. I recall enjoying a ride on the very first journey from Enfield (I know, still at it, 48 years later!).

Winchmore Hill station is run by GTR’s Great Northern brand on the Hertford North branch from Moorgate via the old Northern & City Line. In my youth it had a half hourly off peak service to Kings Cross with DMUs where you could sit at the front and see the track ahead through the driver’s cab. Fantastic.

There were still loco hauled coaches with individual compartments which ran at peak times to Broad Street via a line from Finsbury Park to Dalston Junction as well as peak trains to Moorgate via Kings Cross (York Road) and a link to the lines now used by Thameslink to Farringdon and on via Aldersgate (later renamed Barbican). 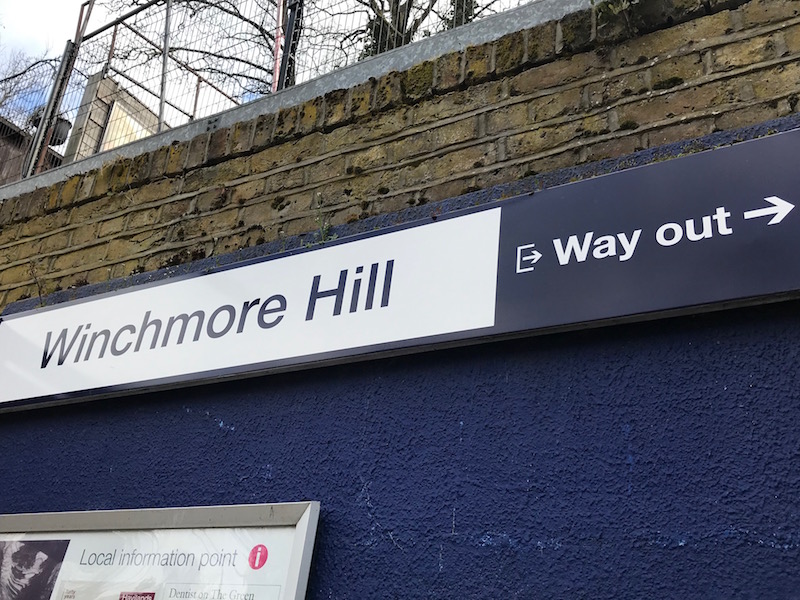 But that’s enough reminiscing; time for my journey to Buckinghamshire’s Winchmore Hill to begin and I’m catching the 11:22 departure bound for Moorgate as far as Finsbury Park. 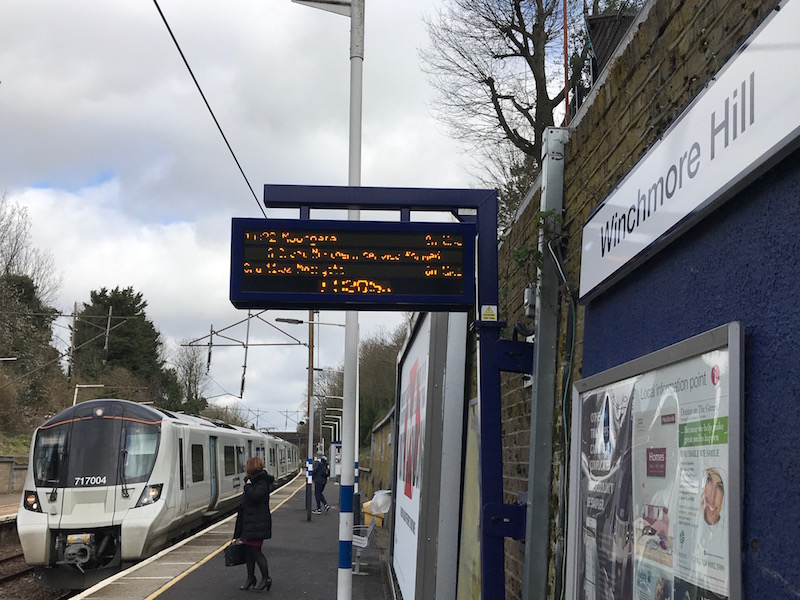 It would be too tight to continue to Moorgate and catch my Amersham bound train there, albeit with one less change, but as Metropolitan Line trains run only half hourly to the end of the line it was quicker to change to the Victoria Line at Finsbury Park and catch the Metropolitan Line at Kings Cross.

In my youth it was just the Piccadilly Line but now of course there’s also the option of a Thameslink train to St Pancras offering a handy cross platform interchange at Finsbury Park and I was so occupied taking a photograph I missed that chance as a Horsham bound train’s doors closed on platform 2 a few seconds after we arrived at 11:37 on platform 1.

Still, you can always bank on a Victoria Line train arriving within a minute and indeed I just missed one after negotiating one of Finsbury Park’s famous circular staircases and another one was just behind and I left on board at 11:41….

…. where I wandered from the Victoria Line to the Metropolitan Line platforms and after a Hammersmith bound Hammersmith & City Line train left, followed by an Uxbridge train and Circle Line train, my Amersham train arrived at 11:57 …

…. and I settled down on a coveted forward facing window seat for the 57 minutes ride to Amersham where we arrived at 12:54.

Amersham Station is currently undergoing work to install lifts and other accessible features so Metropolitan Line trains are not using the turn-back siding to the north of the station and then head back to Aldgate from platform 3 (by the station entrance) but are staying in platform 1 (signed for northbound trains) and leaving from there; something to do with sight lines of signals for Chiltern Trains during the works, according to Twitter.

My last leg was the jointly-operated and timetable-coordinated route 1/1A between Chesham, Amersham and High Wycombe operated by Carousel and Arriva. My journey was on route 1A which takes the direct route from the Station to the Old Town and the bus (branded for route 300, but no surprise there, it’s endemic in Arriva) arrived on time at 13:04.

It’s about a two mile journey down to Amersham Old Town and then along the A404 towards High Wycombe to the junction with Whielden Lane for the Buckinghamshire village of Winchmore Hill. 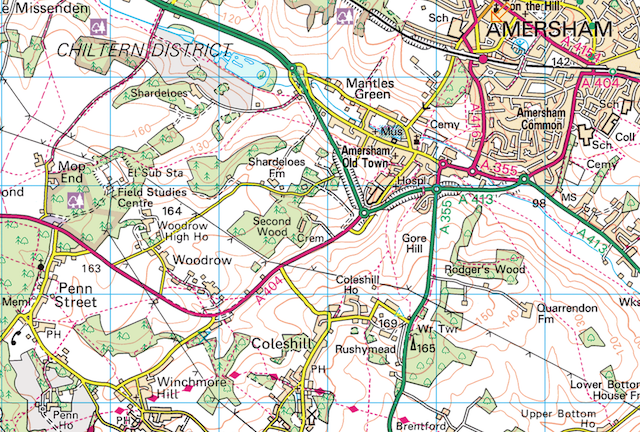 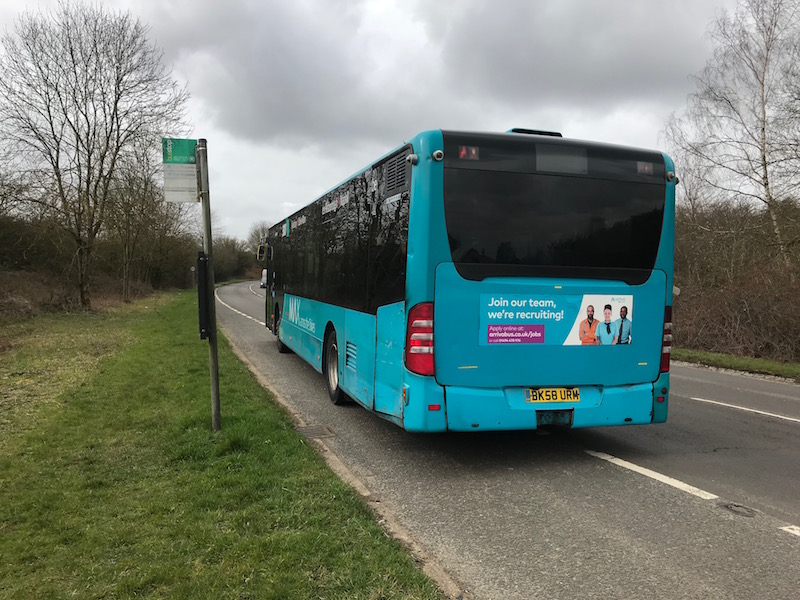 We arrived at the bus stop just past the junction with Whielden Lane at 13:14 and I began the mile long walk along a pavement-less road reaching the village sign for Winchmore Hill at precisely 13:22, exactly two hours after leaving Winchmore Hill N21. 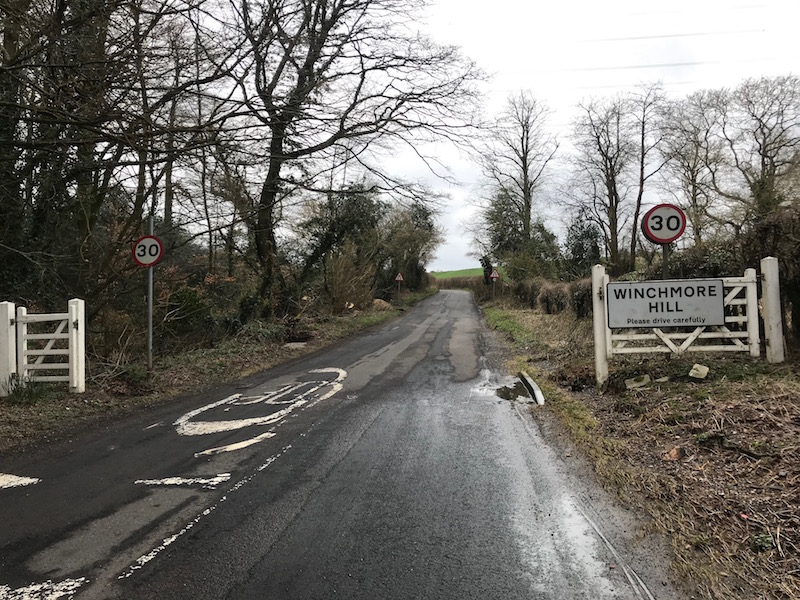 There was something very satisfying about that symmetry as well as knowing if I looked due east there would also be Winchmore Hill, 24 miles away.

The ward of Winchmore Hill N21 (which includes neighbouring Grange Park) has a population of around 13,500. Winchmore Hill, Buckinghamshire is estimated to have just 550 residents, so there’s quite a difference.

I asked a dog walker if there are any shops, but she just laughed and said “no but there is a pub which sells food”. In fact there are two pubs, the Plough and The Potters Arms, a triangular village green and a small village hall. It’s all rather nice and very Buckinghamshire. But that’s about it. Not even a horse trough.

My great surprise was coming across a bus stop as I entered the village along Whielden Lane. 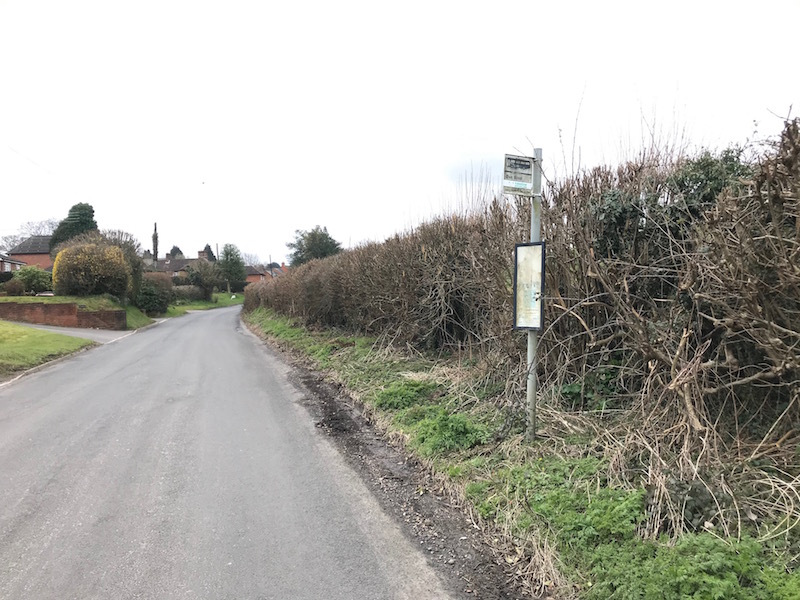 In the absence of a bus map for Buckinghamshire I’d used Traveline to work out how to travel from Winchmore Hill to Winchmore Hill and all my enquiries had advised to use routes 1/1A and walk, as I hadn’t tried a time when the bus service through the village acually ran. That’s the shortcoming of having to rely on journey planners and not having maps.

I suppose if I’d zoomed in far enough on Google maps I’d have spotted the bus stops, but that’s a lesson learned for the next exploration.

The bus stop even had a timetable albeit a little hard to read and this confirmed a bus would be coming along heading for Amersham and Chesham very shortly at 13:34.

I couldn’t believe my luck, as there are only three other journeys on a weekday (09:07, 11:34 and the last one at 17:18). It’s a Red Rose operated route 73 which links Ley Hill north of Chesham with Chesham, Amersham and the villages of Penn Street, Winchmore Hill and Coleshill.

I just had time to continue exploring the village and came across another bus stop which not only had a shelter but also had a full timetable posted inside and details of how long you can spend in Amersham and Chesham by taking the journey options of the four buses a day serving the village, dated six years ago, in February 2014, and still valid today.

It’s great to see some enterprising helpful person has done this, it’s just a pity the bus came with no-one else joining me at the stop nor on the journey. But, frankly that wasn’t much of a surprise, there isn’t much ‘creating desire’ going on here. 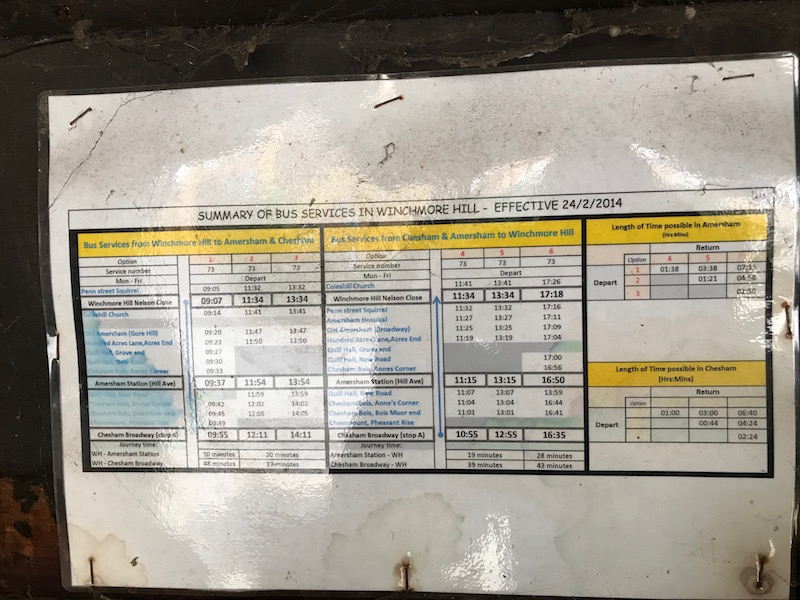 I got the distinct impression the driver was very surprised to see me; asking where I was travelling too as he couldn’t seem to understand why anyone would want to board in Winchmore Hill.

We took a round about route back to Amersham via Coleshill and a residential area of Amersham.

I was relieved to have caught the bus, as I noticed when I alighted from the 1A at the end of Whielden Lane there wasn’t a corresponding bus stop back towards Amersham on the other side of the road.

I’d asked the Arriva driver as I alighted where the bus stop was and he looked around and then pointed vaguely in the direction back towards Amersham mumbling something about “back there”. In fact there is no bus stop heading back and I now understand why Traveline kept routing me back to London via High Wycombe as I obviously needed to get on at the same stop as I’d got off, as that’s the only stop.

Thankfully the 73 came to my rescue, but I did wonder what Winchmore Hill residents do if they want to use the bus to and from Amersham at other times.

I’m pleased to have finally visited my birthplace’s namesake. I’ve come away reassured I was born in the better Winchmore Hill if only because of the considerably superior bus and train services it enjoys and which led to a lifetime interest and fascination, with public transport, including a hugely enjoyable long career, which I doubt would have happened if I’d spent my early years exactly 24 miles due west along Northing 950 in Winchmore Hill. 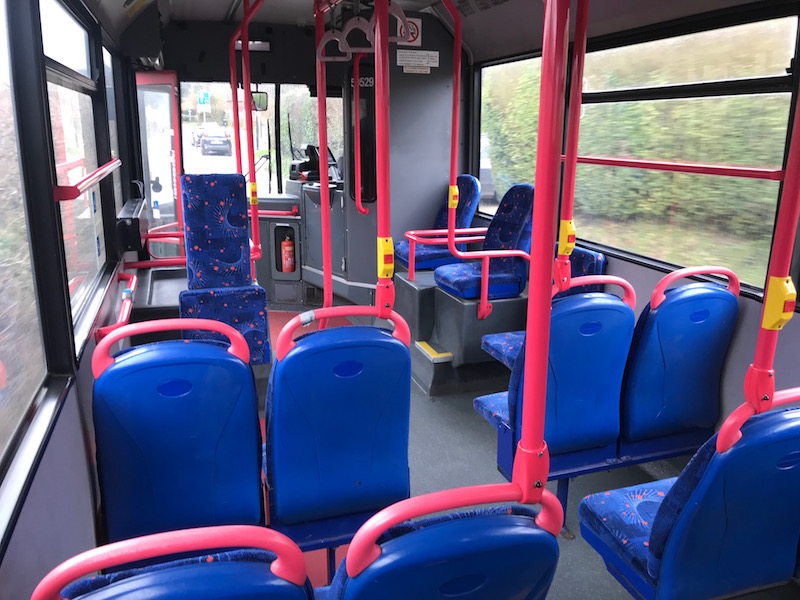