Social media was buzzing this morning with news the previously announced withdrawal of Blackburn Bus Company’s Red Express route X41 had been rescinded and the route will continue after all.

This is good news for Lancastrians living in the Accrington, Haslingden to Ramsbottom corridor on the fringes of Greater Manchester who use this hourly bus route to travel into Prestwich and Manchester for work and leisure.

Alterations had been announced to the Irwell Line branded routes 481/483 with improved connections from them and route 464 on to WitchWay branded route X43 in Rawtenstall as an alternative; but it wouldn’t have been quite so good as the direct X41.

By coincidence I’d made my way north this morning to take one last ride on the route before it’s last day on Saturday so was able to capture the excitement on board ‘live’ as the rescue news broke. 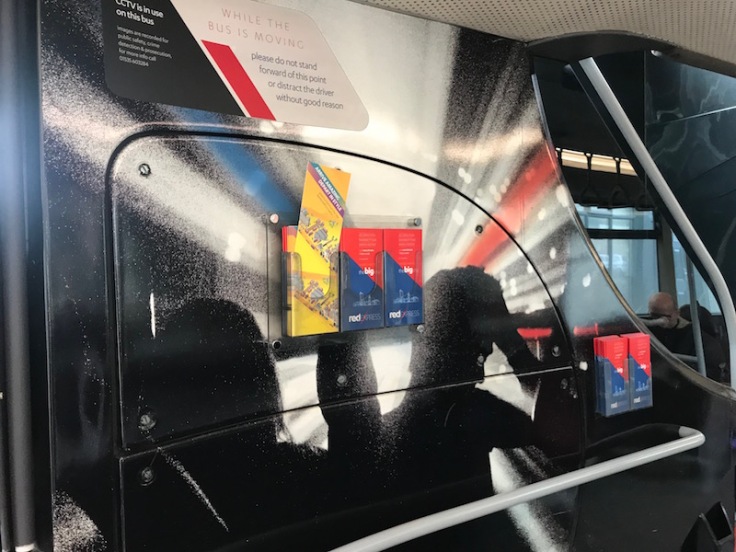 A roving reporter from Bury and Bolton’s local radio station Tower FM was on board interviewing passengers and was most bemused to find an oap from Brighton had travelled all the way up to Lancashire to take a last ride. I reassured him I wasn’t disappointed about the news; indeed, quite the opposite, it was great to see politicians stepping in and coming up with financial support to keep the service going which the Transdev Blazefield owned Blackburn Bus Company had invested so much in at their own risk until now.

The bus company had previously announced it could no longer sustain financial losses of around £300,000 each year running Red Express and its connecting red4 shuttle route linking Bury with Holcombe Brook and Ramsbottom which had been introduced, it said, to meet customer requests. 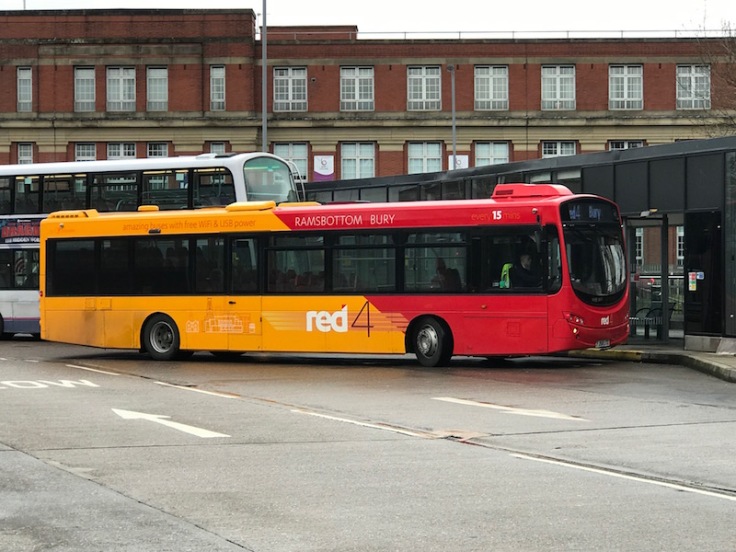 The red4 route runs every 15 minutes providing a handy link to and from the X41 but it competes head to head with former First Manchester, now Diamond Bus, routes 472 and 474 which provide the same frequency but on a circular route. Indications are Diamond Bus has maintained its dominant market share against the interloping red4 – connections to the Red Express or not.

So red4 still ceases after Saturday but Red Express lives on.

It looks like Red Express was the right route facing the right financial challenge at the right political time.

Tweets from recently elected novice Tory MPs in this former northern Labour heartland confirmed their interest in all things transport and I reckon it’s no coincidence that public money has been found at the last knockings to support ”a vital bus route” used by party allegiance changing voters, albeit not in enough numbers to make it a commercial proposition for Transdev. 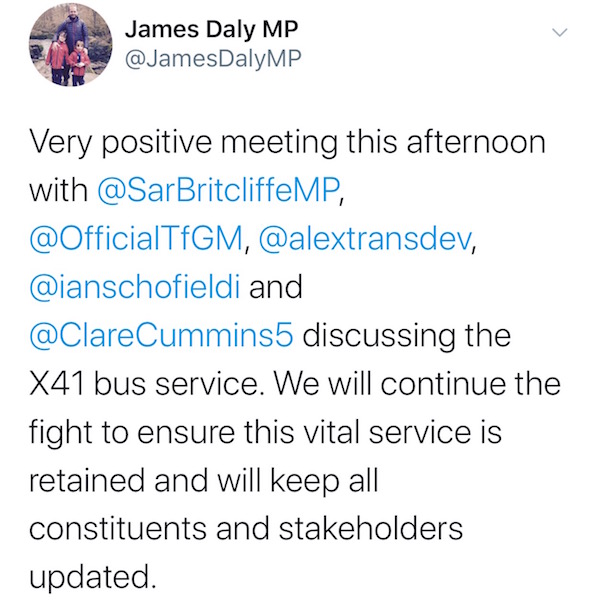 Whereas previously the route was probably not of huge strategic interest to either cash strapped Lancashire County Council or Transport for Greater Manchester due to its cross border characteristic, it’s certainly of interest to new MPs keeping a close eye on anything that smacks of worsening public transport in their new northern constituencies.

It’s an example of how buses are now most certainly on the radar at the very highest political level, make no mistake – wine crate and cardboard box model bus making aside – and particularly buses in the North. I doubt the same reaction would have come from a similar route being withdrawn in southern Tory shires at this time.

I caught an early afternoon journey from Haslingden, just south of Accrington, down into Manchester earlier today and it had a respectable load, if not overwhelmingly into double figures.

The buses are nicely kitted out thanks to being originally spec’d for the prestigious route 36 over in Harrogate until they were redeployed a few years ago. 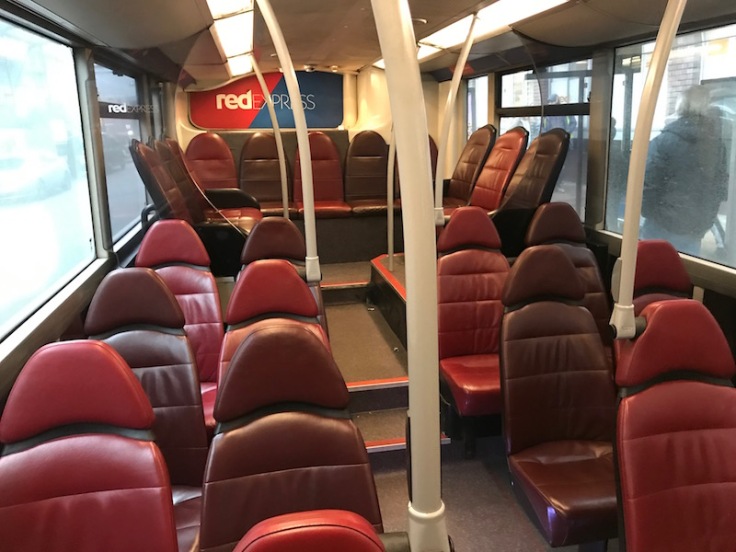 The problem the X41 faces is central Manchester is the obvious draw while Ramsbottom and Accrington are not quite in the same league, so ridership has a very pronounced one direction north to south bias in the mornings and vice versa in the afternoons. Had I travelled with Manchester bound commuters earlier today I’m sure the bus would have been much busier since it provides a great journey opportunity using the M66 and M60/M62 between Ramsbottom and Prestwich and then into Manchester.

From Prestwich south into central Manchester the route is joined by the WitchWay X43 running every 15 minutes from Burnley (with alternate journeys starting back at Skipton) and using more of the M66 by avoiding Ramsbottom.

It’s been announced today the new reprieved timetable for the X41 from this Monday includes two speeded up commuter journeys avoiding the crawl south from Prestwich and Higher Broughton which I’m sure will be attractive to commuters. 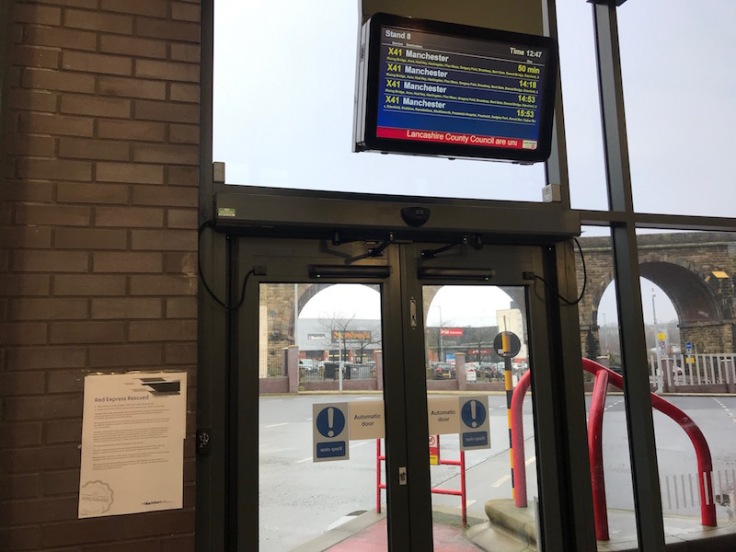 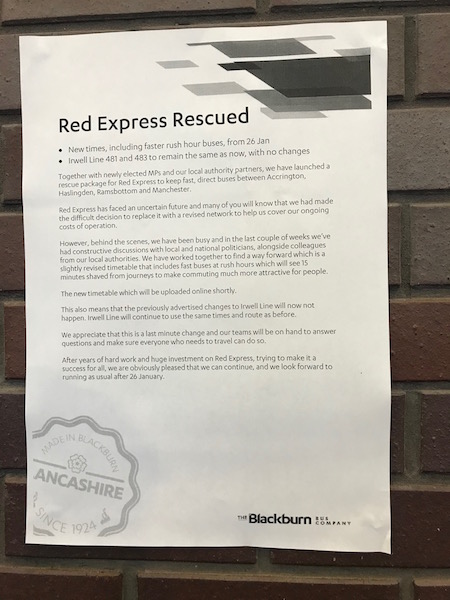 … and even more impressive a message came out of the ticket machine when I travelled on the route to let every passenger know. My driver was also delighted with the news and was sharing it with everyone as they boarded.

It wasn’t that long ago route X41 ran half hourly from Blackburn via Accrington to Manchester before being cut back to Accrington and reduced to hourly in an attempt to make it viable. Let’s hope this newly found pot of gold from the Tory Northern Magic Money Tree that’s ensured the route’s future will see passengers support it in growing numbers; especially as rail options from Accrington to Manchester are pretty dire (and there’s nothing at all from Ramsbottom).

While I was in the area I took a detour to call in at the new bus station in Rawtenstall to take a look around. Opened last November it’s a huge improvement on what went before over the road, now thankfully quickly abandoned and demolished.

Frankly it was a disgrace as I commented before and it’s great to see its replacement at the other extreme of ambiance.

There are eight stands with a bright waiting area and good signage including electronic displays showing upcoming departures. 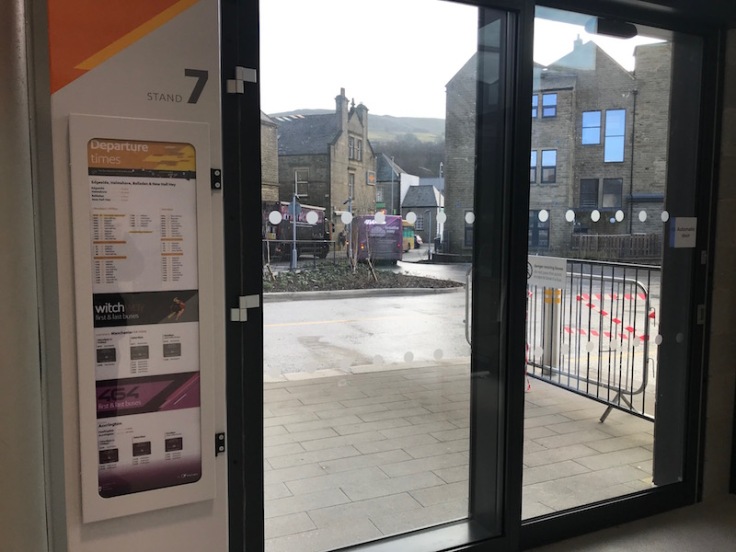 …. (including the Red Express – so today’s announcement saves a bit of updating – although the red4 reference will need judicious covering over!) …. as well as timetable leaflets alongside.

There’s a centrally placed kiosk which wasn’t manned when I called by but looked as though it’s normally in use.

The waiting/queuing area for each stand looked a bit tight for space in some cases and there’s a few seats by each.

It looks like it’s still ‘work in progress’ as what looked like two large spaces for retail units are unoccupied.

There’s obviously a staff facility and I like the sign denoting this rather than something more officious or unfriendly you sometimes see.

There are public toilets – at 20p – which were clean and well presented.

All in all a great improvement and it reminds me that Northerners do know how to do bus stations. 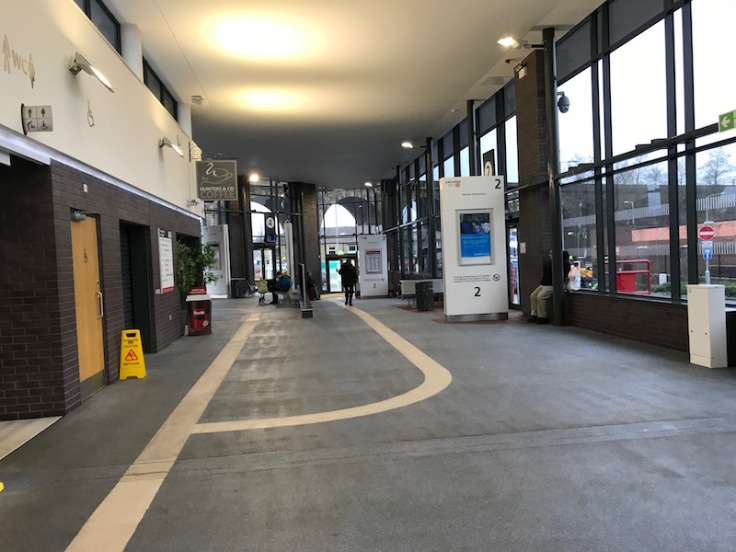 Very nice; and good to see only two ‘wet floor’ warning yellow cones (especially as it was dry)!