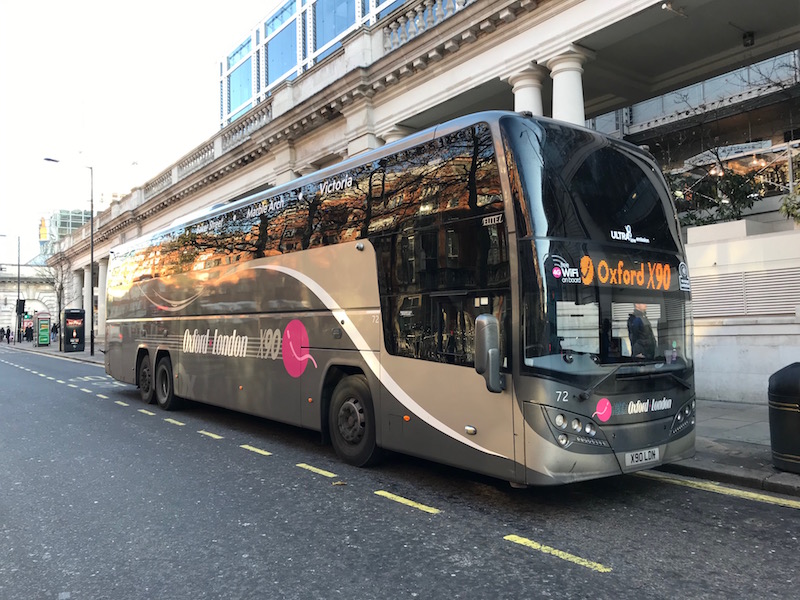 The recent announcement by Oxford Bus of the withdrawal of their long standing X90 coach route between Oxford and London in a month’s time on 4th January surprised a good few industry observers. Me included.

But when I thought about it and read more of the background it really wasn’t surprising at all. 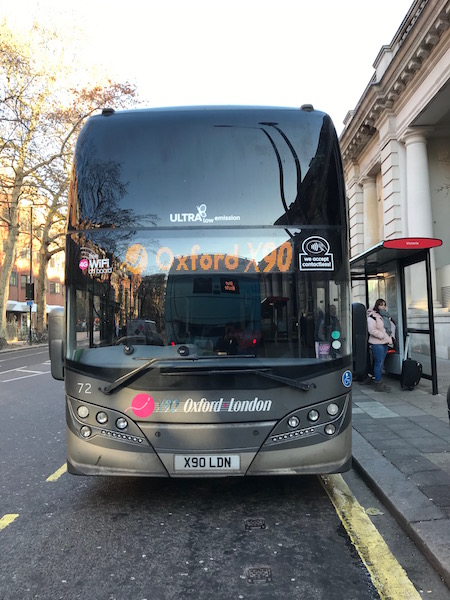 The origins of the X90 go back a long time but it’s in the last thirty years that the Oxford London corridor has experienced intense competition after Harry Blundred’s Thames Transit interloper began the Oxford Tube in 1987 and which was subsequently sold to Stagecoach.

At it’s competitive height the route had the highest frequency inter-city coach service in the UK if not the world. 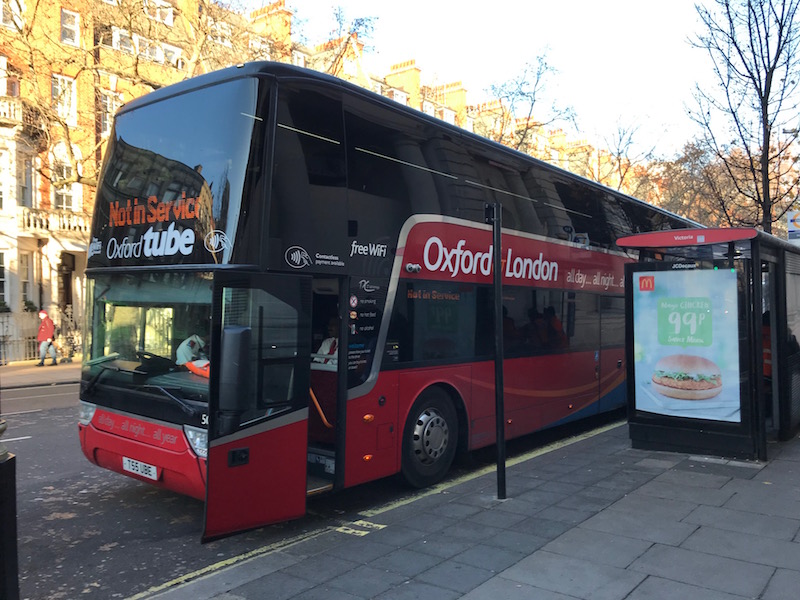 It’s been quite a while since that heyday of high frequency timetables on both routes applying all day and both operators have reduced frequencies to take account of worsening traffic congestion extending journey times and changes to market conditions.

Two notable developments have included a fight back for the Oxford market by train companies with Chiltern Railways’ new service to and from Marylebone introduced three years ago in December 2016 and GWR’s recent upgrade using Hitachi electric Class 800/802 trains with their superior acceleration – a new timetable starts on 15th December with reduced journey times – down from around 56 minutes to an impressive 47 minutes on some journeys between Oxford and Paddington.

Journey time is advertised as 2 hours which is around double what GWR (currently 56 minutes) and Chiltern (65 minutes) take – both pretty much running half hourly too. 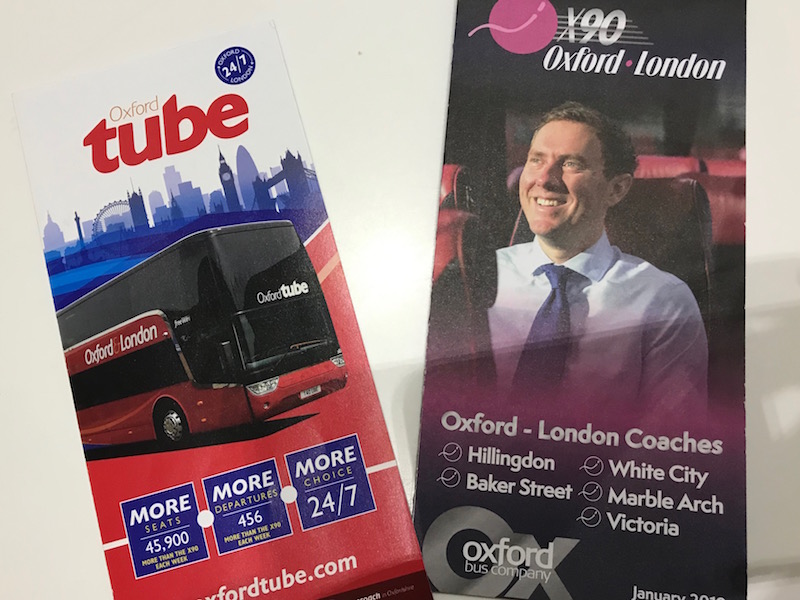 Stagecoach’s Oxford Tube runs every 20 minutes increasing to every 15 minutes in the morning peak and afternoon and half hourly in the evenings as well as hourly through the night. There are two extra departures at 05:55 and 06:15 which run ‘express’ by not stopping at Hillingdon, Shepherd’s Bush or Notting Hill Gate.

Oxford’s X90 takes a different route into (and out of) London following the M40/A40 to Marylebone Road and then via Baker Street to Victoria. As well as Hillingdon there’s a stop for Westfield/White City/Wood Lane (advertised as ‘White City’) on the A40 but involving a less than salubrious walk through White City Estate.

I took a ride on the X90 for a farewell fling this morning and remind myself of the characteristics of the service which will soon be missed. 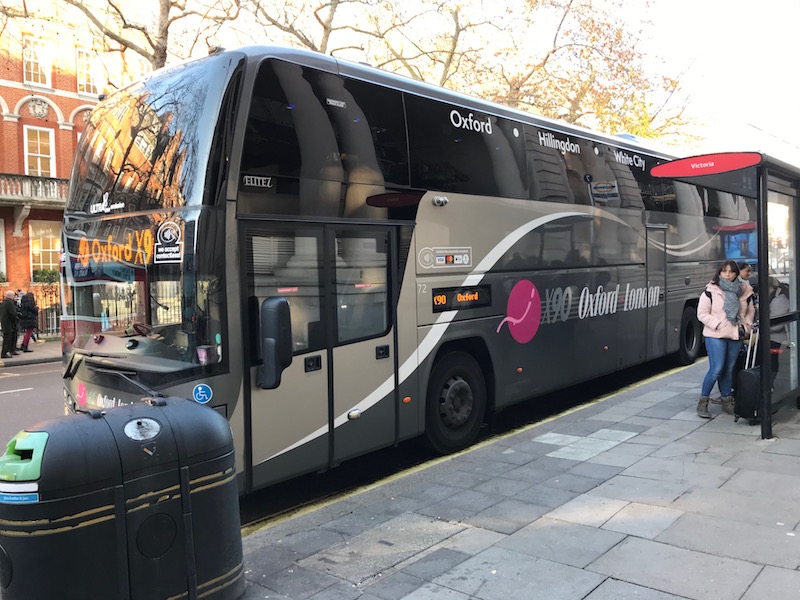 I caught the 11:10 departure from Victoria and the smart personalised registered (X90LDN) Volvo B11RT/Plaxton Elite Interdeck coach was already at the bus stop when I arrived at 10:45. The driver arrived at 11:00 and boarding began. 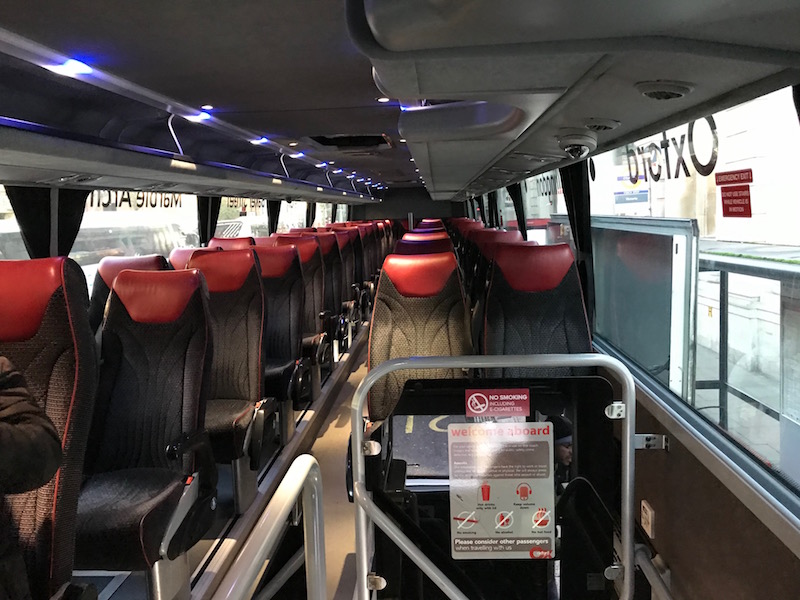 Stagecoach are slightly more expensive at £9 single and £15 return with a week at £58. They’re currently offering an annual ticket at a reduced £1,025.

A GWR/Chiltern anytime return is a whopping £66.60 (£33.70 single) (four times the price of the coach but for the benefit of halving the journey time) and this reduces to a very reasonable £27.40 in the off-peak (£27.30 single) especially if combined with a railcard for further discounts.

It will be interesting to see whether Stagecoach increase prices in the New Year once the dust has settled on the X90 withdrawal. £8-£9 is remarkably cheap for the service provided albeit they need to watch the railcard discounted off peak fare for a return journey on the train which works out broadly the same per single leg.

We left spot on time this morning at 11:10 having sorted all the fares and tickets out for the eleven passengers on board and one more who joined as we stopped on the opposite side of Buckingham Palace Road opposite Victoria station having turned round by way of the Green Line coach station and Eccleston Bridge. That manoeuvre took us four minutes and then it took ten minutes to our next stop at a rather congested Marble Arch where two more passengers joined us. 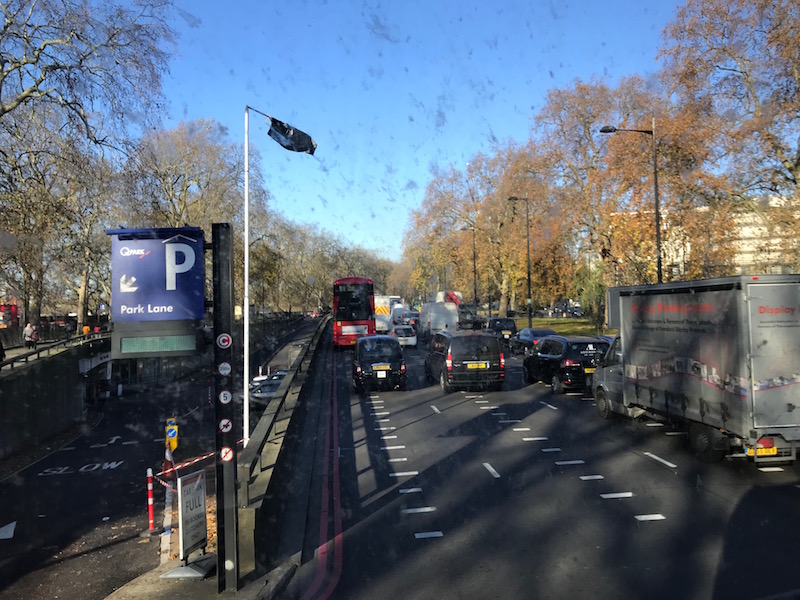 It was slow going at the northern end of Park Lane and we crawled around Marble Arch (helpfully using the bus lane cut through) and along the slow moving western end of Oxford Street but some nifty driving (using the right turn only lanes approaching traffic lights as we headed straight up Gloucester Place) got us ahead of the queuing traffic on the nearside lane and to the stop in Marylebone Road to pick up two adults and a child at 11:36.

Luckily the Marylebone Road and A40 Westway raised section were free flowing westbound (it wasn’t so lucky for eastbound travellers with slow moving traffic) and we stopped at the TfL bus stop called White City Estate at 11:42 where much to my surprise seven passengers alighted including a group of six laden with suitcases.

I hadn’t appreciated you could make local journeys within London and while the X90 leaflet is silent on the White City option it does promote commuting from Hillingdon into London at special fares.

I think I overheard the alighting White City passengers say they’d paid £3 single each (it would have only been £2.40 using the Underground).

We pressed on and it was a treat to dive under the free flowing Hanger Lane underpass (rather than the gridlocked roundabout above us on the North Circular) at 11:56 and we pulled off the A40 nine minutes later to serve the Hillingdon stop where three passengers joined us at 12:06 to bring our new onboard total to twelve adults and a child.

Two minutes later we’re back on the A40, and after another two minutes at 12;10, exactly one hour since leaving Victoria, we pass the M40 signs and it’s full throttle to Oxford on the motorway. 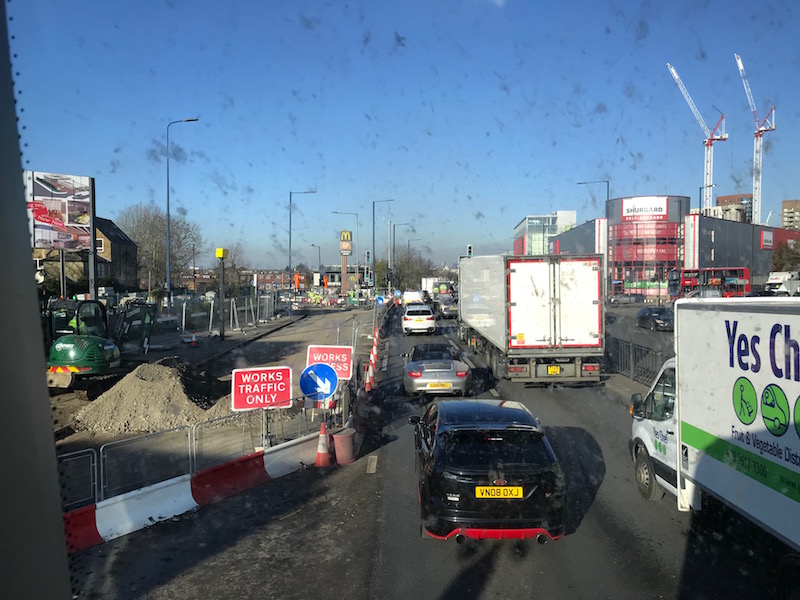 At 12:10 I’d be arriving into Oxford if I’d taken the train and up until now it has felt like we’ve been struggling through London’s traffic, even in the off peak, especially where parts of the A40 Westway/Western Avenue are being dug up to construct cycle lanes and were frustratingly slow moving. I can imagine it must be very slow going at peak times. 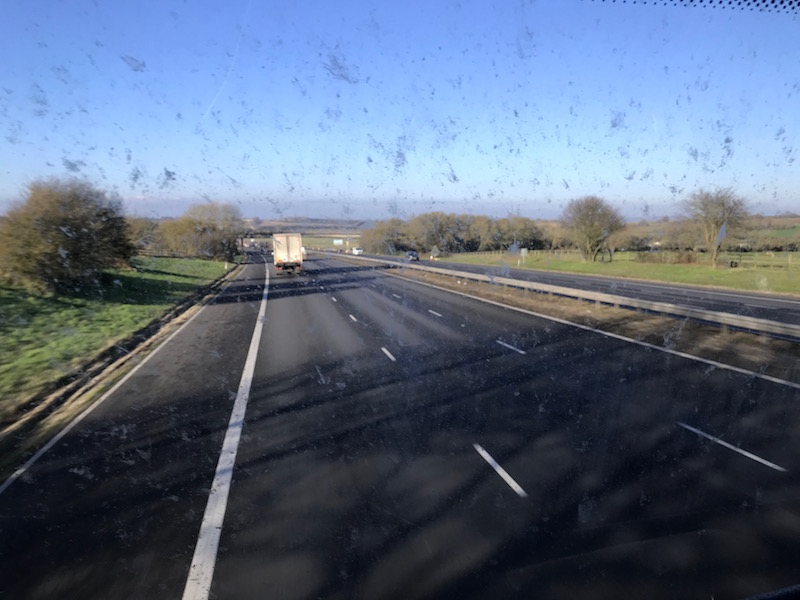 But now we’re on the M40 admiring the view through a rather filthy front windscreen as we glide along for exactly half an hour until we leave at junction 8 and back on the A40 into Oxford.

At 12:45 we pull into the Thornhill Park and Ride site and I decide to say farewell to the X90 here, as did a couple of other passengers. 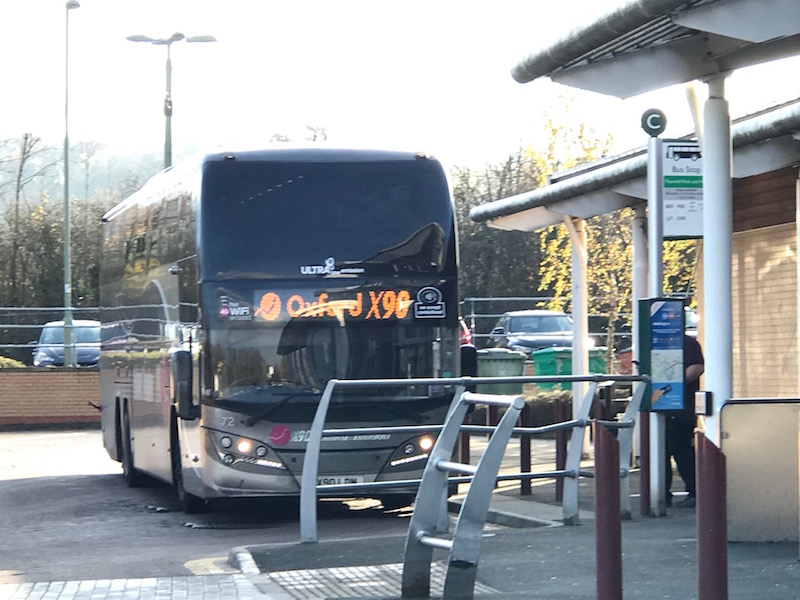 It’s evident the time has come when the market is simply no longer big enough for two coach operators to be slugging it out competitively. As Oxford Bus was the first to slim down and adjust to the financial realities it was inevitable that Stagecoach became more dominant with its higher frequency and round-the-clock service.

It shows a level of maturity that Oxford Bus have withdrawn gracefully and it’s good to see Stagecoach responding by expanding their service with a new timetable from 6th January which includes six extra southbound peak hour journeys running non-stop between Thornhill Park and Ride and Baker Street (following the X90 route) as well as six similar journeys at hourly intervals through the afternoon. While in the northbound direction there will be hourly extras throughout the morning and four extra journeys in the evening peak via Baker Street. These are on top of a new fifteen minute frequency for most of the day except for three hours around lunch time and evenings. 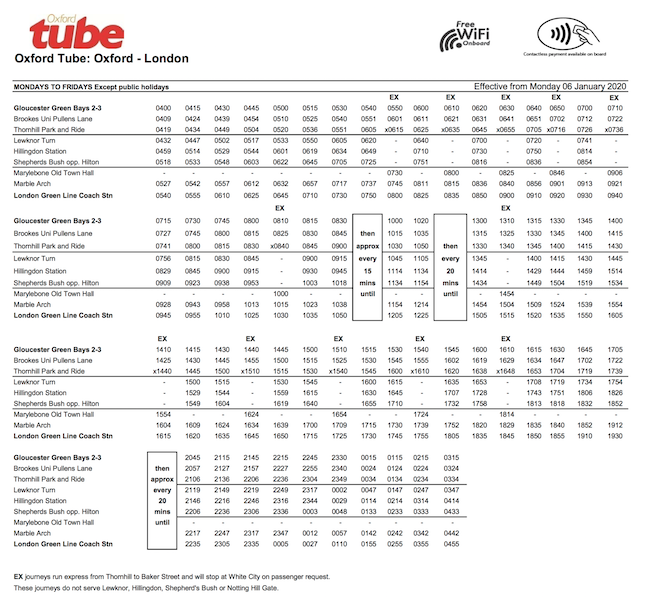 The service will also depart from inside the (rather dingy) Green Line coach station at Victoria which will offer much improved weather protection compared to the rather scant facilities in Buckingham Palace Road.

So, while it’s sad to see the end of an era with Oxford Bus withdrawing from this corridor which has been a feature of the UK bus and coach scene for so long, it looks like it’s in good hands with Stagecoach and its Oxford Tube and the service will hopefully prosper at the new service level. 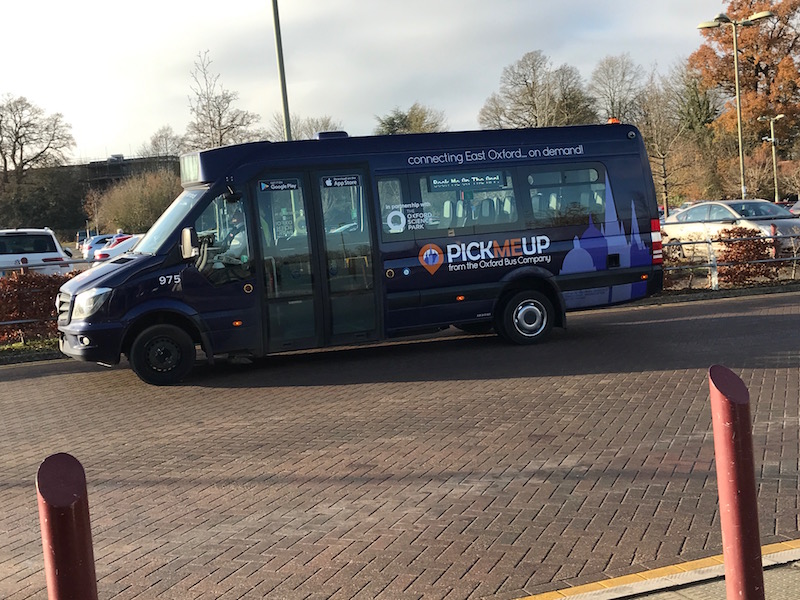 After arriving at Thornhill Patk and Ride I thought I’d give Oxford’s Pick-Me-Up service another try and booked a ride to the John Radcliffe Hospital.

This journey is possible from Thornhill on Stagecoach route 800 running every half an hour with a 9 minute journey time and a single fare of £2, but there’s no Oxford Bus service. 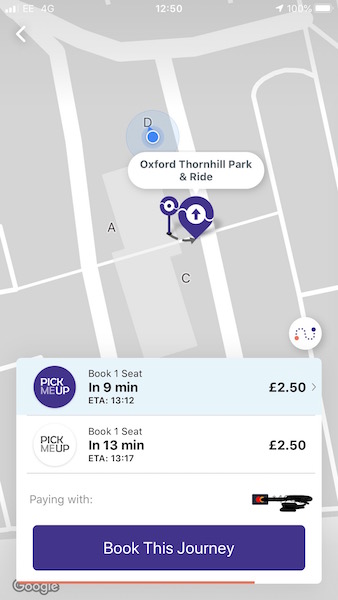 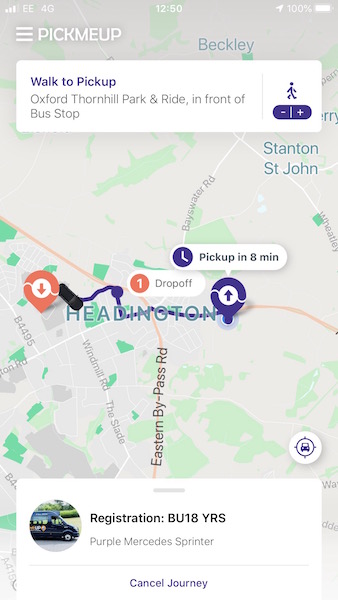 The minibus (which was waiting for custom by the hospital) arrived with me in 7 minutes and we arrived at the hospital at 13:07. Very impressive. 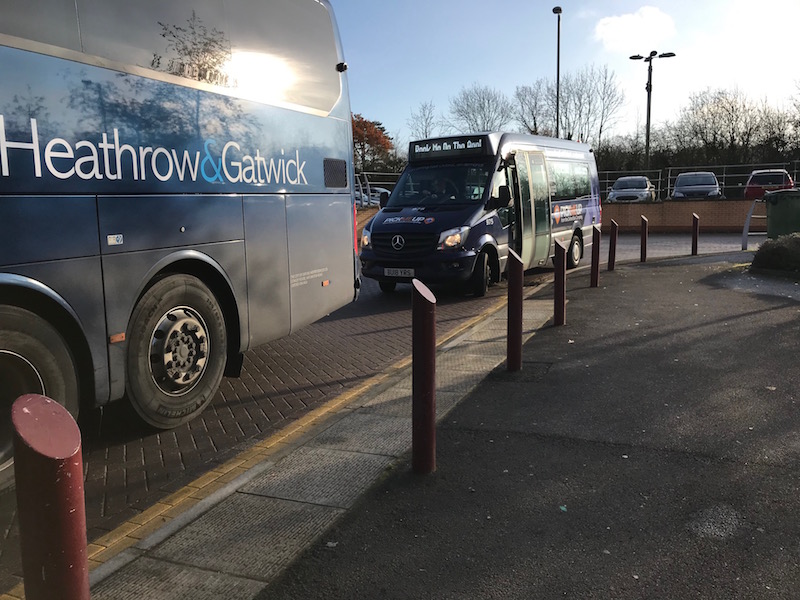 It cost £2.50, pretty good value for what was a personalised taxi journey for me – once again, no-one else wanted to travel at the same time and in the same direction as me. Impressive though it was I could have caught an 800 that left at 12:50 and would have got me to the Hospital for 13:04 according to the timetable. 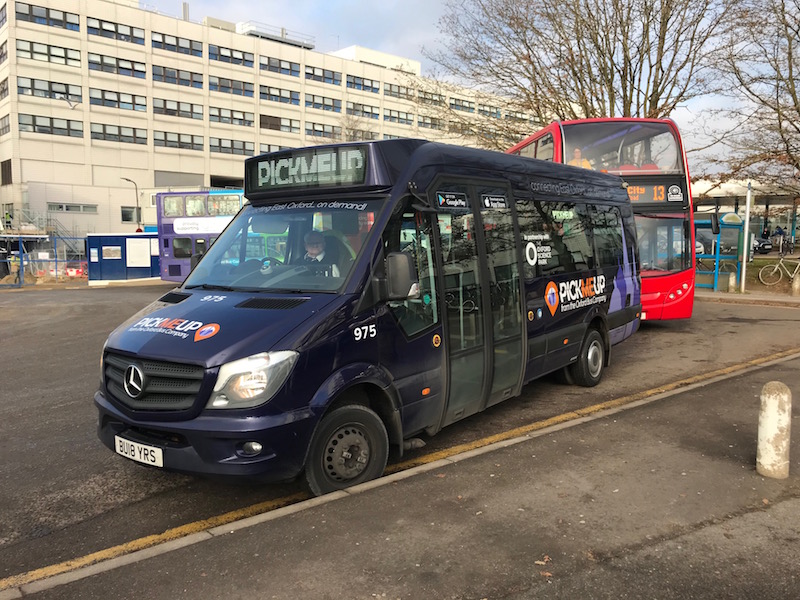 After I arrived at the Hospital, the follow up suggested tip arrangement on the app  doesn’t sit comfortably with me. 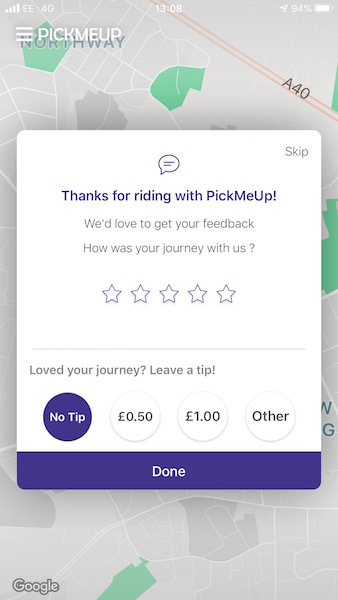 I’m still not convinced there’s a future for DRT but it’s good to see stakeholders such as Oxford Science Park giving their (hopefully, financial) backing to enable these trials to take place.

Despite this partnership I suspect it can only be a matter of time before Pick-Me-Up follows the X90 to the bus route graveyard. 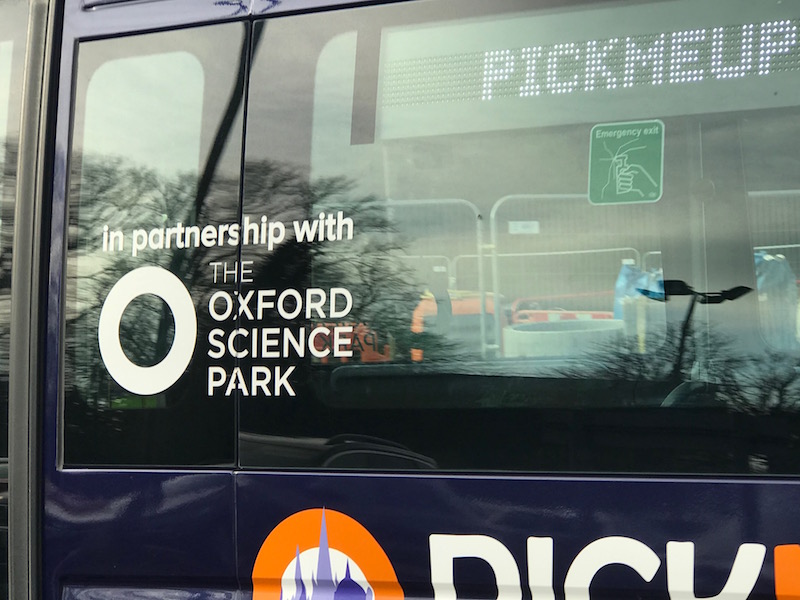 Finally, I was impressed to see promotional boards and leaflets available at Thornhill Park & Ride for the coach services to London and the Airports. Good to see. 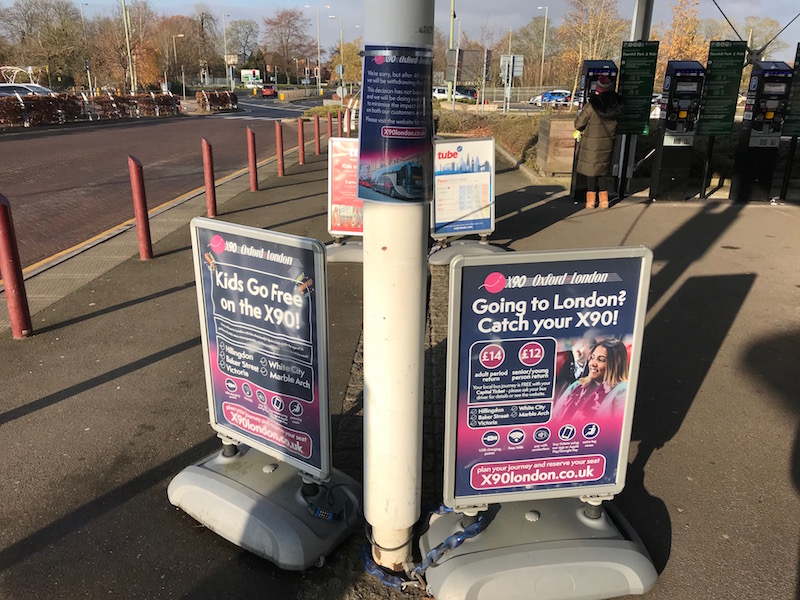 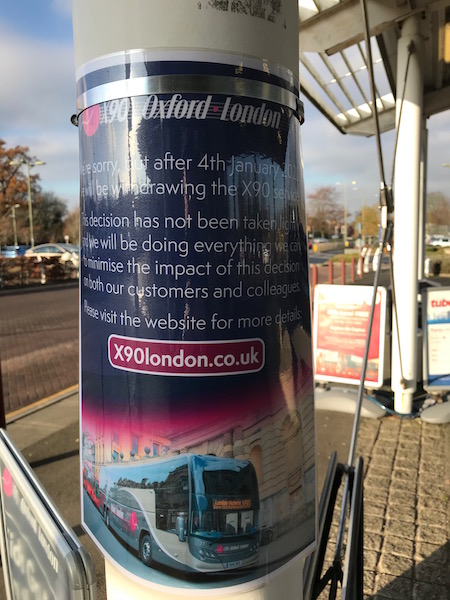 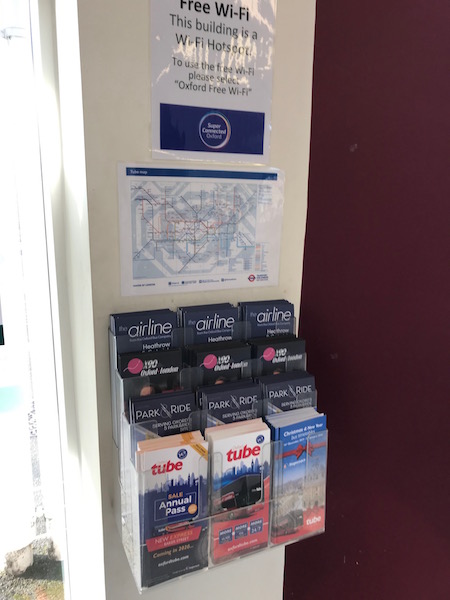