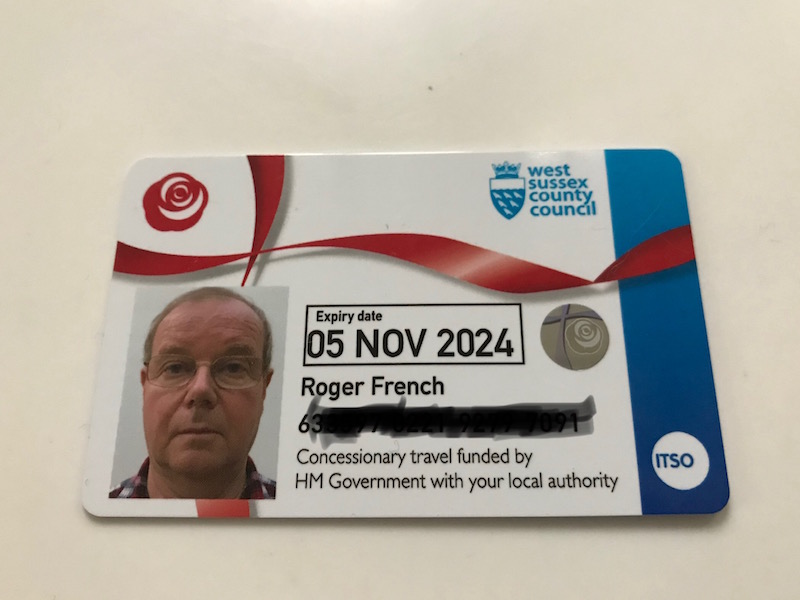 Today’s been an auspicious day for me. It’s not my birthday but by dint of political chicanery back in 2010, my postcode and date-of-birth numbers have today, at last, come up in the concessionary bus fares entitlement lottery. There are now 8,500,001 people in England enjoying free travel on local bus routes all over the nation.

Had I been born just four years before I actually was I would have been admitted into the Free Bus Pass Club nine and a half years ago. That’s because us post war baby boomers born in the first half of the 1950s got caught up in the Government’s controversial increase-the-female-pension-age-from-60-to-66 policy to which the entitlement of a concessionary bus pass for both males and females became aligned from 2010.

Between my 60th and 65th birthday the entitlement date for a pass seemed to get further and further away as the transitionary period accelerated faster than my ageing. Still, on the upside, at least being a 1954 babe means I’ve only had to wait until aged 65 and 7 months. Had my Mum and Dad waited a few more months before my conception, I’d have had to wait right through until aged 66 – more than another five months away.

Then there’s my postcode. By a quirk of fate arising from Margaret Thatcher’s Government publishing a White Paper in 1984 which saw the deregulation and privatisation of the bus industry I ended up staying (and thoroughly enjoying) a career running buses in Brighton for the ensuing thirty years. Had the 1985 Transport Act never come about, I’d no doubt have continued a career involving a move from one job to another all around the country, as I did in the nationalised 1970s and early 1980s, and who knows, might have ended enjoying retirement with a postcode in Scotland, Wales, Merseyside or London. In that case I’d have been enjoying free travel within those areas 5 years and 7 months ago when I hit 60; as all residents aged 60 and over in those areas continue to do today. Indeed lucky Londoners aged 60 and over can travel on the Underground, DLR and trams as well as buses to work and, after the morning peak, on trains too.

Conversely my home county, West Sussex, is one of two-thirds of local authorities offering the stautory bare minimum set by Government under ENCTS. Around a third of local authorities allow (and fund) pass holders to travel before 09:30 on Mondays to Fridays and slightly more also allow journeys after 23:00. Some also allow travel on trams where operated.

My new found freedom from fares is all thanks to the Concessionary Bus Travel Act 2007 which improved the previous half-fare travel concession throughout England (which itself had been introduced from 1st April 2006) to free travel beginning from 1st April 2008.

It costs approximately £1.12 billion per annum to provide the statutory minimum local bus travel concession in England (including London) but the whole business of grants to local authorities and reimbursement to bus operators is obscure and opaque. Since 1 April 2011 all funding for ENCTS has been wrapped up within the Formula Grant each local authority receives from the Department for Communities and Local Government and is indistinguishable from other funding awarded to Councils.

Reimbursement rates bus operators receive are an even murkier affair. I’ve yet to meet a bus manager happy with their reimbursement arrangement. I’ve yet to meet a local authority officer happy with the funding received from Government to reflect concessionary pass use. Legally bus companies should be no better or worse off as me and the other 8,500,000 passholders travel around. If the scheme were to end tomorrow, some of us would still travel but pay full price adult rate fares including day and longer period tickets; I certainly would! But how many others would and how many journeys would simply disappear because they were no longer free is not known, no matter how much research into generation factors is undertaken.

Consequently in a world where local authority funding is in a downward spiral, the pressure is on Finance Officers to reduce reimbursement rates paid to bus companies which in turn undermines the financial viability of some of the very journeys passholders depend on.

Those 884,000,000 journeys made in 2017/18 attracted funding for bus companies of £888,000,000. That’s pretty much a £1 per journey. (In London it’s 80p and in shire councils on average it works out at £1.14). One bus manager in a Home Counties bus company was telling me recently he receives 94p per journey. No wonder he can’t afford to run a shoppers special dominated by ENCTS passholders to Bluewater in Kent with a two-thirds full 45 seater bus bringing in the grand sum of £56 revenue (there and back). It hardly stretches to cover the cost of diesel used.

Personally, from today I’m going to be quids in with my new pass (and now receiving a statutory pension too). So far this year I’ve spent £403.21 (the odd penny was for last Tuesday’s ride on Stagecoach’s new X1) on bus fares in England. That’s for 153 journeys in England (I’ve excluded journeys in London which I usually use a Travelcard for; on Go-Ahead Group buses which I receive a retired staff pass for and for journeys in Scotland and Wales which my ENCTS pass won’t cover), so that works out at £2.63 per journey, which means for the likes of Arriva, First, Stagecoach, Transdev and a whole host of small bus companies I’ve travelled with this year, if they only receive that average reimbursement of £1.14 per journey for my travels in the coming years it’ll be a reduction of 57%. While local authorities where I travel, which have previously not had to worry about my wanderings in their territories, will now have to hand over an average £1.14 each time I’m in town (or village) and travel by bus.

I’ll be better off; bus companies and local authorities will be worse off. The Government won’t provide any more funding as they’ll assume as I begin my life of ENCTS travelling, someone else, somewhere else will be ceasing theirs, either through ill health or death. And they’re not far wrong, pass take up rates are broadly stable while absolute numbers have been declining as the qualifying age has been rising.

The whole issue of whether concessionary bus travel has been a good thing is mired in controversy. There’s the ‘we’ve paid our taxes all our lives and deserve some benefits in retirement’ argument and the ‘it reduces social isolation and enhances personal wellbeing and mobility’ as well as the ‘it achieves modal shift as older people are not driving their cars and can still get about’. The Greener Journeys campaign funded by the Big Groups reckons the scheme is great not only for those reasons but for the industry as well; yet at the same time bus companies and local authorities are overseeing reductions in bus journeys for reasons often related to poor reimbursement rates for concessionary travel. It’s naive to think any scheme dependent on Government funding is ever going to be satisfactory. Ever.

Anyway, I’ve at last come of ENCTS age, and intend to make the most of it. I can only apologise to colleagues in the industry; henceforth they will no longer be properly rewarded for my custom.

To celebrate my new ‘oldie’ status today I took a train well before the 09:00 Senior Railcard watershed at my local Hassocks station thereby handing extra money over to Southern Rail (which ironically goes straight to Government in that management contract style ‘franchise’ meaning I’ve more than funded my bus travels today) so I could be in Hertfordshire by 09:30 with my newly issued pass to try it out.

I started my new fares free regime off with a wander around Herts, Bucks and Beds spreading the funding reimbursement requirements around a few local authorities and bus companies. 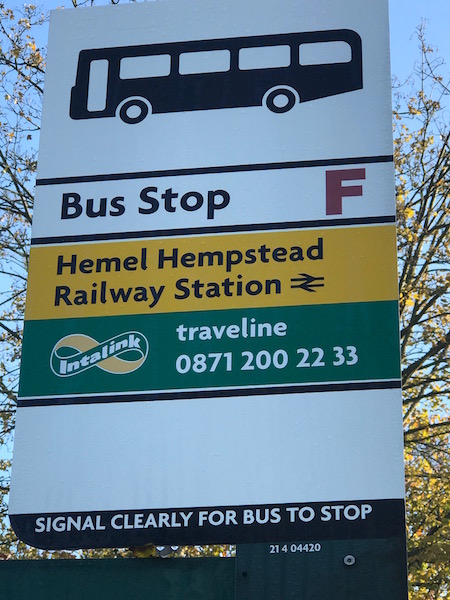 Hemel Hempstead seemed a good place to begin but the day didn’t work out as originally planned due to North Western Railway running late, but at least I didn’t have to worry about wasted money on operator specific day tickets I may have already bought on my phone as plans changed. 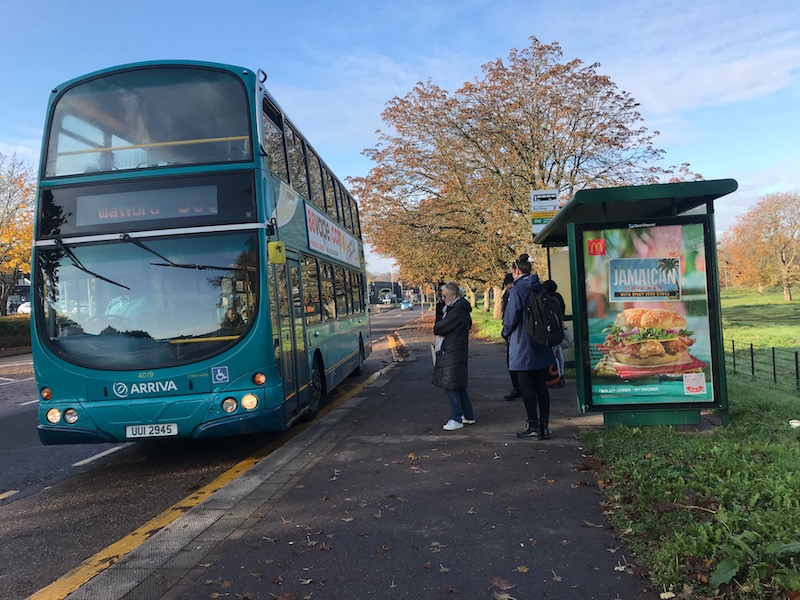 My very first concessionary journey kindly funded by Hertfordshire County Council was just a short trip into Hemel’s town centre on Arriva’s route 500. I think I noticed from the passenger boarding in front of me this would only have cost me £1.10 paying full fare so just a teaser to start.

Next up was a trip across to Luton on Centrebus route 46 which would have cost me £4.20 yesterday, but today Hertfordshire County Council funded me.

My bus fare savings are increasing as I then head over to Milton Keynes on Stagecoach route 99 which costs £6.40 single. Thanks Luton Borough Council for finding that.

Then to Flitwick on the newly improved hourly timetable on Grant Palmer’s route 34 and with an impressive load too, and a brand new bus. Milton Keynes Borough Council will be picking up the tab for that journey giving Grant Palmer £2.36 (I understand – so nicely more than that £1.14 average) instead of the £6.30 I would have paid them had I travelled yesterday.

I then had a fascinating impromptu interlude with a guided tour of Grant Palmer’s garage in Flitwick thanks to Thomas Manship (it’s a great family owned bus company) who’d spotted my travels coming in his direction on Twitter, before taking Thameslink down to Luton where I took my fifth and final freebie of the day.

And the most expensive too, at £12 single for a ride on Arriva’s Green Line 757 to Victoria, another reimbursement requirement for Luton Borough Council.

If I’d replicated today’s travels yesterday it would have cost me £30 in single journey bus fares as interestingly no day ticket would have covered my varied operator/geographical area/journey itinerary. As it is I paid nothing and three local authorities (Herts/Luton/MK) will probably be handing over around a tenner – I’ve no idea what the precise reimbursement arrangements are especially for the 757, but I suspect they’re not generous.

However, I only made these journeys today because I received my new concessionary pass, so in fact Arriva, Centrebus, Stagecoach and Grant Palmer are better off no matter how much they get reimbursed as I wouldn’t have planned a day out incurring £30 worth of fares.

That’s the vagaries of ‘generation factors’ for you and why it’ll always be controversial.

Leave a Reply to BusAndTrainUserCancel Reply