A quick, cheap Easyjet flight from Gatwick up to Glasgow for 1030, a ride into the city centre on First Glasgow route 500 allowing time for a wander to admire recent and welcome new arrivals in that company’s bus fleet and it’s soon time to see the ongoing redevelopment at Queen Street station before catching the 1220 for Mallaig with a portion for Oban – a train of two halves. 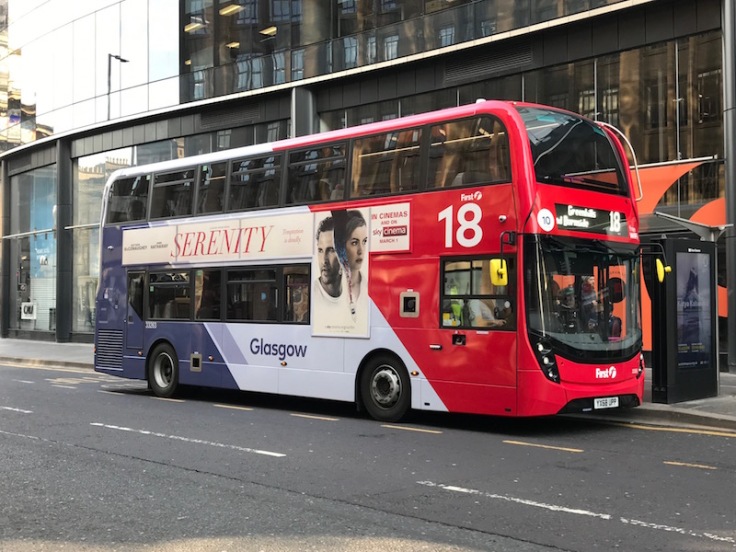 A two carriage train arrives into Queen Street from Oban on time at 1203 to form the rear portion for the 1220 to Mallaig but it’s not until departure time at 1220 that what will be the front two carriages (for Oban) arrive from the depot and join up and we’re allowed on board for a slightly delayed departure at 1225.

The five hour twenty minutes train journey to Mallaig gets better as every hour passes. Luckily at this time of year the train isn’t very full so there’s plenty of room to swap sides for the best views as we make our way along the line. 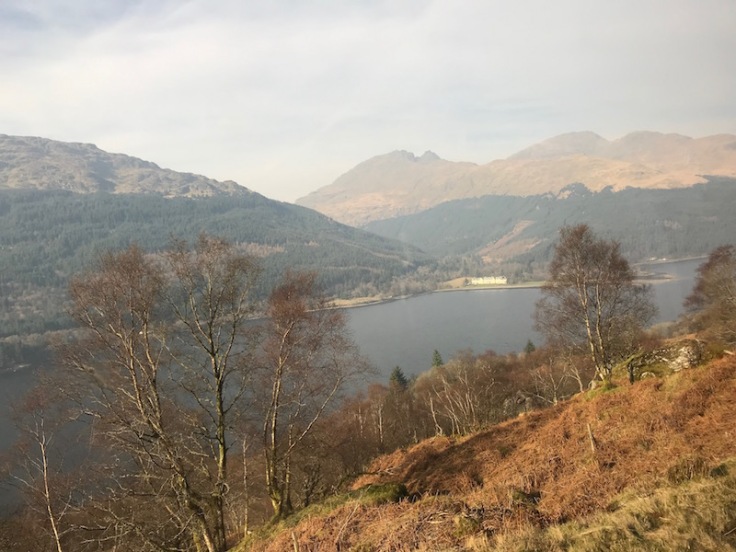 The magnificent Clyde on the left hand side, then Gare Loch between Hellinsburgh Upper and Garelochhead followed by Loch Long and then over on the right hand side, Loch Lomond as far as Ardlui.

At Crianlarich there’s time for a quick stretch of the legs on the platform while the front two carriages are uncoupled and head off to Oban first as we begin the slow climb towards the highest summit on the line at the delightful Corrour. But not before enjoying the wonderful horseshoe curve on the left hand side between Upper Tyndrum and Bridge of Orchy and the deer enjoying the isolation of Rannoch Moor, watching out for the snow shelter just after that station, although not needed this month!

After Corrour the gradual descent passes the magnificent Loch Treig on the left hand side and the waterfall on the River Spean as the train approaches Roy Bridge not long before we enter Fort William for another brief stop as the driver changes ends and a crew change before we set off on the final leg to Mallaig.

…..but the slow meander alongside Loch Eilt on the right hand side before continuing through mountain scenery to Arisaig, Morar (Britain’s most westerly station) and finally arriving in Mallaig at 1743. Every minute a delight.

At this time of year there are no ferries to Armadale on Skye and the light is rapidly fading so I opted for a return journey in the dark to Fort William for an overnight stay.

Time to pick up some snacks for lunch from the large Morrisons adjacent to Fort William’s transport hub (it’s going to be a tight connectional day during eight hours travelling) before the 1000 departure on Citylink’s 916 service to Kyle of Lochalsh.

It seems strange to see Fort William devoid of Stagecoach buses. The beneficiary from last year’s exodus has been the smart looking locally based Shiel buses who’ve added the town’s local bus routes to its longer distance routes which include the wonderful route 500 to Mallaig which largely parallels the rail line being equally as scenic and well worth a ride. 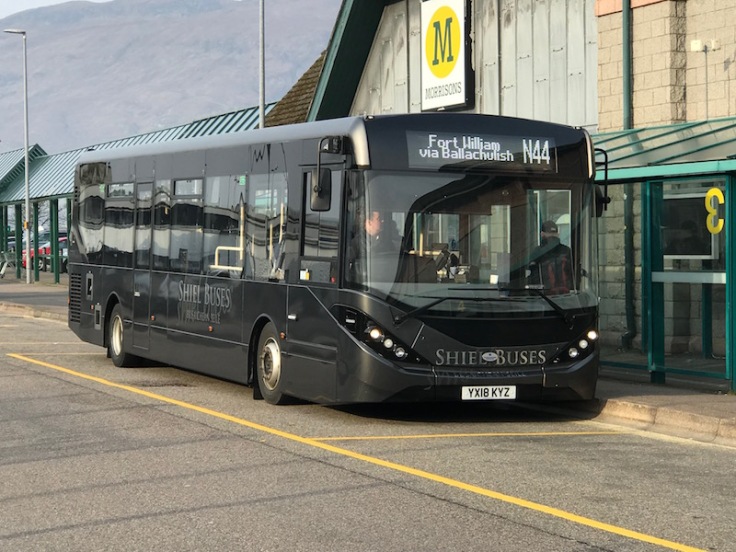 Hi-Trans provides stop departure information for local bus routes and the Mallaig departures which the computer software confusingly refuses to acknowledge is Mallaig rather than the unhelpful destination for tourists of Hotel.

The traditional timetable displays for Citylink look rather faint and forlorn are not in keeping with that Company’s smart image.

On the upside there is a ‘real’ (actually ‘scheduled’) electronic display showing the next two or three departures from each stance which commendably is replicated in the adjacent station by the ticket office. The station also has an independent Travel Centre which had local bus timetables for Shiel buses as well as CityLink and Caledonian MacBrayne (ferry) timetables.

The Caledonian Sleeper rolls into Fort William at 0957 just three minutes before the 916 leaves for Kyle of Lochalsh and onwards to Portree and Uig on Skye. What a shame there’s not a better connection as it would give tourists much greater options to travel around this area by public transport.

However a new Lounge for arriving sleeper passengers (and departing passengers in the evening) has now opened and there’s the obligatory electronic totem point which lists the one departure of the day, as these now do having been installed at every station served by Caledonian Sleeper trains. An amazing expense for one train a day. Quite extraordinary. Compare this to many bus real time systems being turned off and left out of use by local authorities for lack of funds. 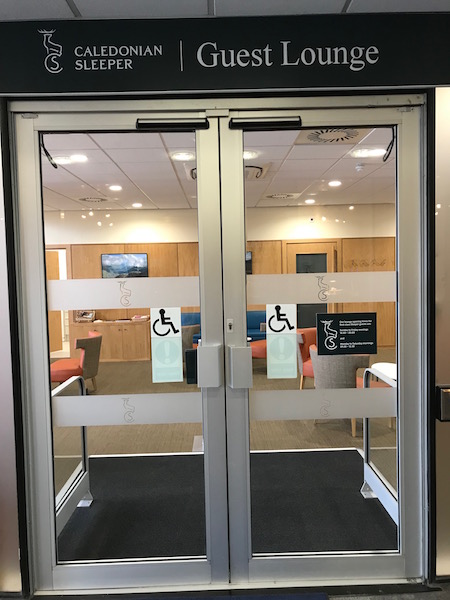 My 916 coach arrives spot on time at 0951 giving passengers already on board a welcome break before departing again, especially if they’ve been in board since leaving Glasgow at 0650. The timely arrival was reassuring as I had my fingers crossed for an on time arrival into Kyle of Lochalsh at 1152 giving enough time for a leisurely wander from the bus stance to the rail station for the 1208 departure for Inverness.

I’ve still got bad memories of a southbound trip on the 916 last summer (from Uig to Fort William) which got badly delayed on route due to heavy traffic, many temporary traffic lights along the way as well as getting stuck behind an abnormal load taking the same route!

Luckily today our driver made good progress keeping impeccably to time helped by sparse traffic and only two temporary traffic light sections both of which we got green lights on approach and sailed through.

Our coach was from West Coast Motors with legal lettering showing ‘Craig of Campbeltown’ and not surprisingly drivers changed over in Fort William. Our fresh driver decided to do his paperwork and logging on with the door firmly closed letting passengers reboarding, after their leg stretching and fag break, first followed by us newbies. There were only nine of us in total leaving Fort William. 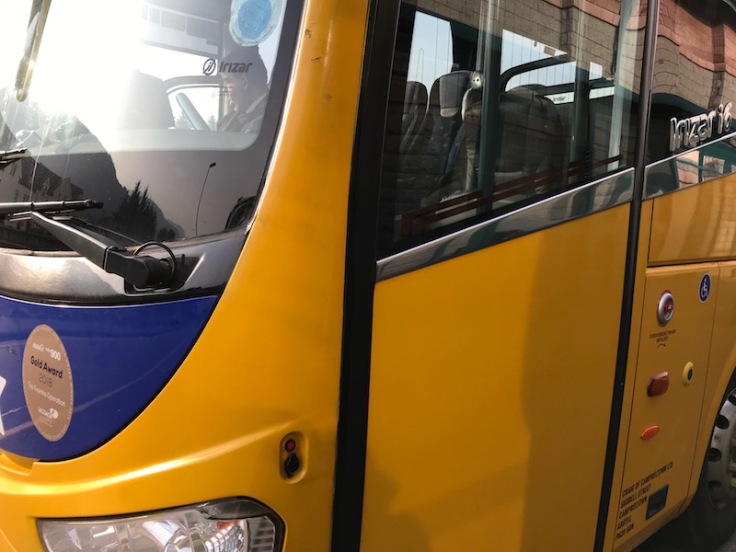 The closed door seemed a touch rude and unfriendly but our new driver made up for it by driving smoothly during the entire journey and giving a great ride.

Citylink’s 916 is undoubtedly Britain’s most scenic bus route (it was voted second in last summer’s internet poll). It rivals the West Highland rail line offering alternative views of Loch Lomond as well as Glencoe before Fort William and on my journey, the spectacular scenery alongside Loch Lochy and Loch Garry before continuing along the famous Road to the Isles.

The 1208 ScotRail departure from Kyle of Lochalsh was ready and waiting in the platform as our coach pulled in to the nearby town centre bus stop. A wander through Kyle before boarding gave time to pick up a coffee.

We left spot on time which was another timely reassurance as on arrival in Inverness I only had six minutes before the Glasgow train I was booked on departed.

When I compiled my Hundred Best Train Journeys at the end of last year there was no question that the Kyle of Lochalsh would come near the top, if not the top spot. It’s a well deserved second to the West Highland Line to Mallaig and it’s scenic delights never disappoint.

Today the low early Spring sun made for some spectacular reflections in Loch Carron which had to be seen to appreciate and can’t easily be represented by a camera phone photograph through a train window. It really was quite a splendid ride made all the better for keeping to time and arriving in Inverness at 1442 for an easy cross platform interchange with the 1448 departure to Glasgow.

This three coach Class 170 was busy even at this time of year and the intended introduction by ScotRail of refurbished HSTs on this and other ‘Inter7City’ routes is a masterstroke of marketing and route development.

The Highland Line offers wonderful mountainous views through the Cairngorms and came in at number 4 in my listing (behind the Oban section of the West Highland Line). 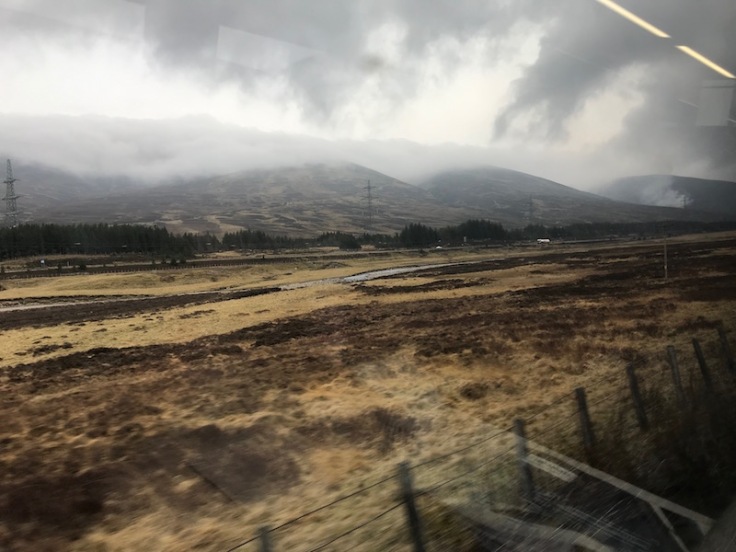 It’s been a brilliant first two days in Scotland with a few more to come.

2 thoughts on “A few days in scenic Scotland 1”